“If we built housing to suit the community’s needs, we might end up with more children at school and more people in work”

The news that Federal Indigenous Affairs Minister Nigel Scullion plans to link priority for social housing in remote areas to school attendance and employment is ringing alarm bells for Paul Dutton, a ‘wiimpitja’ of the Barkindji nation in western NSW.

The Minister’s plan looks like putting the cart before the horse.

You can’t address school attendance and employment without ensuring people have access to appropriate housing.

Children need a stable home environment if they are to get to school.

The same argument can be made regarding employment – without a fixed address, it’s difficult to find or keep a job.

Access to social housing would reportedly be linked to enforcing rental agreements and rental payments of a property and the liability for damage to that property.

Again my instant reaction to this statement is that for years we have known the housing that is provided by the Commonwealth has almost always been inferior quality to other housing stock.

This is not so surprising when you consider that tenders for buildings in remote locations are overseen by Commonwealth public servants, making decisions from Canberra with very little or no experience or understanding of the environments or conditions to which these homes are to be built.

Decisions tend to be made upon price rather than upon which proposal is best suited to the conditions and needs of the housings’ occupants or the particular environmental conditions.

Do they even consider or regulate as mandatory set minimum standards regarding appropriate remote housing?

In my experience, witnessing the situation at Wilcannia in NSW, they do not.

But my biggest question for the Minister and his department is whether they have actually asked remote communities what their ideal house would look like?

Is it four closed walls with small windows that are also closed?

Maybe the community would prefer homes with an open design, with large open areas well covered for outside living and contact.

Or maybe they would prefer some other design altogether – perhaps something innovative that delivers great housing, social interaction, personal and family wellbeing?

Wouldn’t that be clever – a housing design that also works for health and social and emotional wellbeing.

I cannot sleep in my house without the window being open, without feeling the breeze, without hearing the birds or whatever other wildlife is present calling out.

I often go outside at night, look at the stars, feel the night on my skin, I attune myself to Earth and specifically where I am.

That connects me, that’s what Aboriginal people want. We do not switch off from our culture and our environment because we walk inside a building. Without that connection to the living, breathing world, culture can be affected.

The saying goes, “the home is where the heart is”.

Well it’s about time every single State and Territory Government and especially the Federal Government start asking Aboriginal people and communities, what does that look like for them?

If Aboriginal people had the home of their dreams like every other Australian citizen, even in a community housing sense, why wouldn’t Aboriginal tenants want to then purchase a home they designed?

Billions of dollars have been poured into housing for Aboriginal people that is based upon Anglo designs and expectations.

If we built housing to suit the community’s needs and wants, we might end up with more children at school and more people in work.

• This is an edited version of an article first published by Paul Dutton at his blog.

I am a ‘wiimpitja’ of the Barkindji nation born in Broken Hill, far western NSW. ‘Barka’ referring to the river, the Darling River.

I was part of the stolen generation, adopted into a non-indigenous family whilst two other siblings were also removed and placed in separate foster care placements. We were all placed over 1400 kilometres away from family.

I grew up in Liverpool, NSW and met my birth family when I returned to Wilcannia in 1988. I am now a traditional owner and board member of Mutawtinji National Park, which is located between Wilcannia and Broken Hill. The four family groups of the park have 2 representatives each who oversee the management for it. I have been a family representative on the Board since 2001.

My partner Michelle and I have 6 children, Merinda studied Law at UNSW, Manduway attends Aboriginal Centre for Performing Arts (ACPA) in Brisbane & is a part of a group formed by the students who perform regularly, Keeden studies Physical Education at Southern Cross University in Lismore, Alinta is studying Environmental Forensics at UTS in Sydney whilst Talara and Jara’na are still in school.

I hold a personal interest in government policies and programs for Aboriginal communities in a holistic sense and believe that’s the most appropriate, efficient and effective direction policy should be directed.

I also have a strong interest in environmental protection & human causation for climate change and how best to develop strategies which will guide economic development for our nation as well as alleviate personal cost blowouts through increased natural disasters.

Mother Earth & my spiritual elders current and past help direct me in my personal life, provide me with the strength required for these fights for our rights and for wellbeing of our children’s children and for my future direction as a Barkindji man. 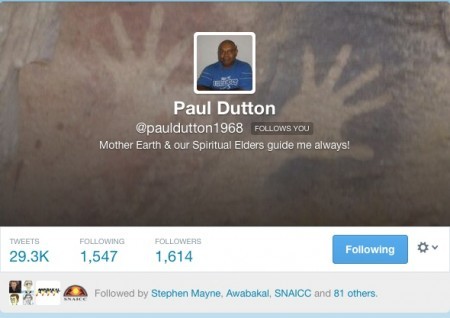