If you don’t have time for Twitter, perhaps you should make time to read this…

If you still think you haven’t got time for this tweeting mularky, then Carl Heslop has some news for you, fresh from the Public Health Association of Australia’s recent annual conference in Perth.

A nurse based in rural WA who is undertaking a PhD in public health research, Heslop makes a case for the Twittersphere being a critical realm for public health professionals.

It’s an easy, throwaway line – but are you really too busy to bother with pithy tweets and pesky followers?

Or, are you ignoring a chance to join a community, a conversation or communicate?

This year’s PHAA’s annual conference was a bit of a Twitter-fest. A Tweet-love-in.

Twitter-converts espoused the benefits of engaging in social media. They talked about the opportunities, the advocacy and the chance to connect with like-minded colleagues around the world.

Many Twitter-virginities were lost over those heady few days, as people clamoured to join the conversation that was #PHAA2014 and embrace the brave new world of social media. Connections were made online and followed up in-person. 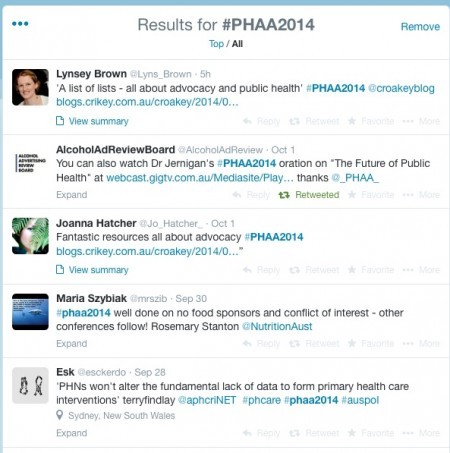 #PHAA2014 trended nationally, earning the conference a mention on Old Media’s The Project. Colleagues who were unable to make the conference could follow on, pick up the gist, see the main slides and join the conversation.

From the Sunday morning before the conference through to the following Friday afternoon, 5,764 tweets were attributed to the #PHAA2014 hashtag. There were four tweets per minute from over 1,000 contributors.

Some were spam. Some were irrelevant. But most were from public health professionals, advocates or organisations. Some were critical appraisals of what was being said onstage.

Some were quirky ideas to encourage thought (I’m thinking of you @baumfran and your thought-bubble suggesting there should be a limit of six published pieces per career).

Some were relaying the presentations, and tagging organisations, colleagues and Twitter-contacts. Most were interesting.

The use of Twitter at conferences brings a new angle to the idea of being “published”. I read recently (in an old-fashioned paper-based journal – Collegian) about the guest editor (Caleb Ferguson – @calebferg) attending a conference where embargoed RCT findings for a stroke prevention trial were released simultaneously online in the peer-reviewed literature, with the link shared on social media as the findings were presented at the conference.

This kind of coordinated approach creates a buzz around a research paper. There is instant discussion – online and offline. Instant engagement. Instant readership.

The British Ecological Society requires papers submitted for its journal, Methods in Ecology and Evolution, to have an accompanying 120-character abstract to allow easy sharing via Twitter.

Most professional bodies and organisations have a Twitter account. Some are much better than others. Often, organisations or journals can struggle to compete with engaged individual Tweeters.

Not everyone needs to be a convert. That’s ok – but just be respectful of us here in the Twitter-verse. You don’t have to join us, but at least consider the possibilities, the opportunities and the benefits.

And don’t let “time” be a barrier. Some incredibly busy, high-profile public health individuals are using Twitter to engage with colleagues, follow global news as it happens and advocate for their causes.

People like @tarunw, @SimonChapman6 and @timsenior are pretty busy individuals who still manage to find some time for Twitter.

Perhaps start off by following them, and see where it takes you. 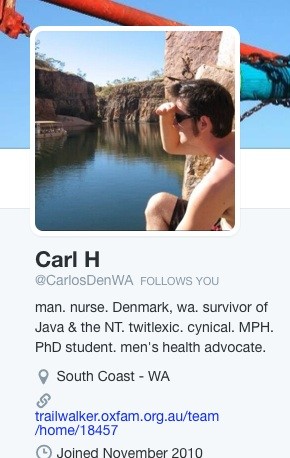 Other stories from #PHAA2014

PrevPreviousCalling for more Indigenous health researchers, and control over research
NextIs this the end of unproven breast imaging in Australia?Next