If today has touched hearts of people and opened hearts to hear our stories, find understanding and be able to share that, that’s success for me.”
Dr Lynore Geia, #IHMayDay16, 12 May 2016.

#IHMayDay16 was the third annual Indigenous health Twitter marathon and festival – a day of action and listening on the health and wellbeing of Aboriginal and Torres Strait Islander people.

At its heart was this year’s theme – youth and families and suicide prevention, issues that intersected deep discussions through the day on jobs, justice, education, health care, mental health, culture, identity, and the mechanisms for change, including proper funding and self-determination.

As with the previous #IHMayDays, it was a huge day of conversations and connections: #IHMayDay16 ranged for 15 hours, trended nationally, featured a team of moderators and more than 20 guest tweeters, involved more than 2,100 participants, and generated more than 60 million Twitter impressions.

For its founder and key facilitator Dr Lynore Geia, this year’s event was significant in the way it reached out to a wider audience than in previous years, to politicians, media, young people, another campus, other conferences, into the federal election campaign, and beyond Twitter.

As IndigenousX founder Luke Pearson put it, as he ‘arrived’ online for his third time as an #IHMayDay guest tweeter:

First I just want to talk up how awesome a concept #IHMayDay16 is, a full day to focus on Indigenous Health, in the lead up to the election!

Co-host of this year’s event, University of Wollongong academic Dr Bronwyn Carlson said in this statement:

As a tool for action, social media provides us with a forum within and across territorial borders where our voices can be heard and where we can communicate, network, educate, share and challenge.

What was striking too, as co-facilitator Summer May Finlay noted, was the graciousness in the exchanges, between Indigenous tweeps and organisations on very sensitive issues, and the respectful listening and retweeting of non-Indigenous people.

“It’s really nice to feel the love,” she said.

It’s hard to convey the power of the day-long discussions in just one wrap (though you can read through the whole Twitter transcript – it’s worth it!) but below are some highlights, guided by Geia’s reflections as she looked back some days later on the marathon event.

And see this quick Periscope interview with Croakey’s Summer May Finlay and Melissa Sweet at the end of a very long day of tweeting.

Croakey readers might also be interested to read this paper by Geia and Croakey’s Melissa Sweet examining the themes and theoretical foundation of #IHMayDay.

Hosted by University of Wollongong

#IHMayDay is the brainchild of Lynore Geia, a Bwgcolman woman from Palm Island and Nursing, Midwifery and Research academic from James Cook University, who has previously hosted the event online and in real life at her Townsville campus. This year she welcomed the opportunity to take this year’s event to another campus, after Carlson and her University of Wollongong colleague Dr Tanja Dreher  approached the #IHMayDay16 team to offer support.

It’s about creating a bigger context, particularly with health education.

Having universities host IHMayDay brings that context alive, takes us into the campus and is an opportunity for staff and students to come along in a non-threatening environment – in real life and online – to engage around the issues.”

Those interactions began at UoW on the day before, with Carlson and Dreher hosting public workshops on Indigenous Health and Social Media for Advocacy and Activism that attracted a constant stream of staff and students. Carlson tweeted:

Indigenous Health subjects @UOW make a difference. It isn’t about ticking a box it is about wanting equality #IHMayDay16 @DavidKampers

UoW students also added to the stronger youth voice at #IHMayDay16 moderating one session on identity, culture, and education.

See some of the related tweets:

‏@TessRyan1: My own personal healing of trauma has been assisted by community connections and education #IHMayDay16

@DakotaFeirer: I owe personal mental health challenges to the pressures of racism at all levels, #IHMayDay16 it undermines many health inequities in youth

‏@FlyinGenie1:  Our young ppl deserve to be strengthened by culture so they can see themselves positively & build resilience through culture #IHMayDay16

Geia also welcomed greater engagement by politicians and media with #IHMayDay16, saying “people are starting to listen a bit more”.

Fresh on the election hustings, Labor’s Rural and Regional Health spokesman Stephen Jones, the local MP, dropped in to the Wollongong campus (see his interview with Summer May Finlay), and a number of MPs and Senators, including Greens Leader Richard Di Natale, signalled that they were following the discussion.

Geia said she opted not to have a political debate with these two guests (although the conversation elicited a valuable commitment from Wyatt to the Indigenous rangers program, and allowed other participants to make some important points on funding – see below).

Instead, she wanted to connect on a personal level, to talk to them, in the context of the day’s theme, about their role as parents and family members, and how they stay grounded, in their communities.

It prompted some moving exchanges, even more poignant in light of the vicious criticism that Peris was subjected to soon after when she announced would not recontest her Senate position. 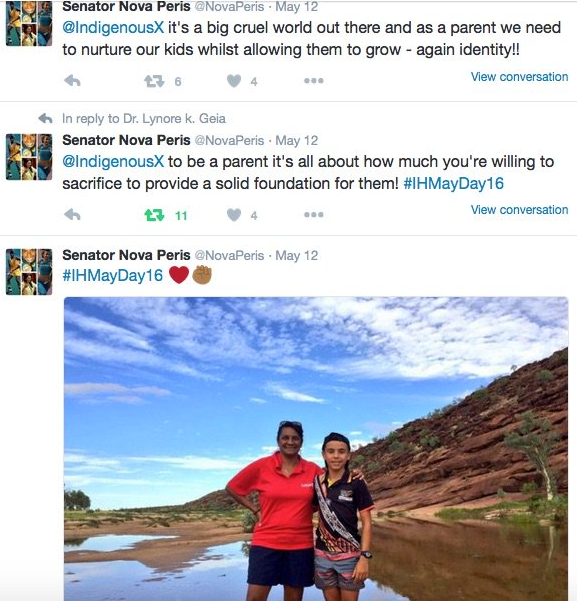 Geia asked Wyatt what his experience as a father taught him about building strong families and also what he did to de-stress? He replied:

it’s love, support & sharing. It takes an entire family to nurture a child, and a community to support #IHMayDay16

the best way I de-stress is to get out in country, walking in the bush, and spending time with my family #IHMayDay16

Meanwhile, others took the opportunity to make some timely political points: 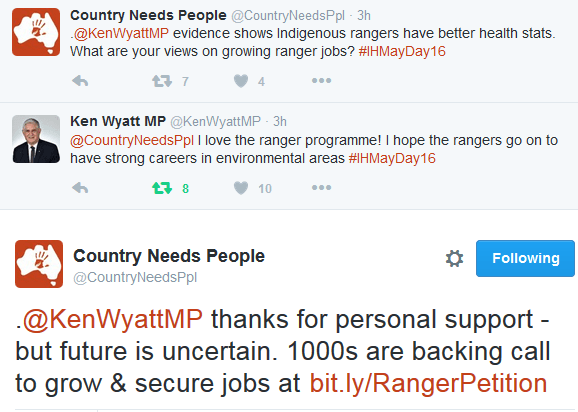 #IHMayDay16 also made the news, with this report on NITV, an interview on The Wire radio, and this profile in Guardian Australia, through the long-standing support of the event by IndigenousX, whose founder Luke Pearson moderated an hour’s discussion for the third year and also spoke at the pre-conference workshop on advocacy:

I say it every year but I’ll say it again: don’t use Twitter only as a billboard… It’s a community. Be a part of it, with us. #IHMayDay16

#IHMayDay16 was also the focus of the opening question to an Australian Medical Association media conference as it released its key election issues. 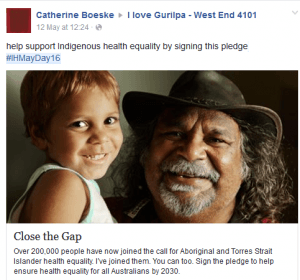 #IHMayDay16 connected across jurisdictions and hashtags, with many issues intersecting, particularly with the #HealthEquity16 conference hosted by the Australian National University in Canberra on the same day.

It also coincided with the release of a new Lowitja Institute discussion paper, reviewing government engagement with First Peoples in developing health policy.

Rhonda Wilson, a member of the Australian College of Mental Health Nurses and the Congress of Aboriginal and Torres Strait Islander Nurses and Midwives, took the helm at Croakey’s rotational @wepublichealth account, talking, amongst other topics, about the use of social media amongst health professionals. See her (co-authored) article on Nurses and Twitter: the good, the bad and the reluctant.

And as the day progressed, former #IHMayDay guest tweeter Dameyon Bonson, the founder of Black Rainbow who was in New York to participate in the United Nations Permanent Forum on Indigenous Issues, pointed out that the hashtag was also being widely shared in Facebook conversations.

As she has previously done on #IHMayDay, Lynore Geia took the helm at the landmark Indigenous Twitter rotational account @IndigenousX and made a call out to country on the evening beforehand. Here is her call and some responses. 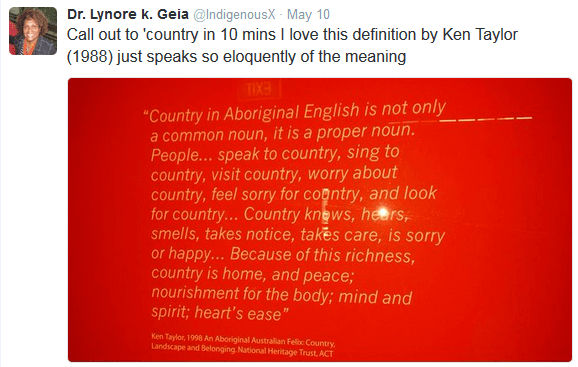 The session hosted by champion boxer and ex rugby league player Joe Williams personified many of the messages shared through the day across many fields of interest.

See this short film about Williams, with the message ‘you don’t have to beat it, you just have to manage it’, and this recent interview with him by Summer May Finlay. You can also read his blog here.

Williams told #IHMayDA16 he now traveled the globe delivering suicide prevention programs, urging people to open up about mental health and to recognise the role of physical health.

Asked what we do re stigma, he replied:

By talking – there is nothing wrong with mental illness, it’s like a cold or a flu, except it’s not visible

For me culture & connection is the one thing that keeps me rich – it’s 60,000yrs of emotional richness

Exercise and healthy eating is also key….I hate exercise, my mind tells me not to – but I have to make myself to keep me well. Promise – try it, worse thing can happen is get fit

@Mirima_Language joined the conversation, saying it was important not to ignore the importance of language and culture in Indigenous mental health, linking to this Canadian report.

#IHMayDay guest tweeter @MarumaliConsult also recommended resources: Working Together: Aboriginal and Torres Strait Islander Mental Health and Wellbeing Principles and Practice by Pat Dudgeon, Helen Milroy and Roz Walker, SBS Insight’s Back from the Brink on men and suicide, and Lowitja Institute’s “deadly work focussing on the importance of law and culture to #SEWB.

headspace guest tweeter Samantha Wild said we need to find the best of traditional and contemporary Australia, with cultural & peer mentors to support young people who are having a tough time, and culturally informed, strength based approaches to youth suicide prevention that address trauma. She introduced rapper Philly and linked to a number of great videos produced under headspace’s Yarn Safe projects: NRL star Joel Thompson’s story for the Yarn Safe project, Got a lot going on and Your space.

SNAICC trainers, Emily Maloney and Dr Jenine Godwin-Thompson, spoke also about trauma and the need for a culturally safe and caring environment to promote healing.

It isn’t easy to move from shame and fear about feeling helpless, but we have to talk about solutions as First Nations’ Peoples.

Hearing the voices of our communities unmediated by researchers is essential!!

Paul Dutton’s session on the loss of most Community Development Employment Projects (CDEP) programs across Australia and threats to close remote communities in Western Australia raised many concerns for young people, mental health and community life.

There was also much frustration that the Coalition Government’s Indigenous Advancement Strategy had awarded so much funding to non-Indigenous organisations rather than investing in local communities (because governments ‘see disadvantage’ rather than look for unique culture) and the impact of changing government priorities.

meanwhile our little black org employs our mob & scaffolds career development, if we can why can’t they?

we get ppl drive into our community 2 work on us & ask how 2 engage-what about employing our mob instead?

Samantha Wild spoke to the need for “meaningful employment without fear of discrimination or racism” and said:

Jobs may be available but unless strong education strength, previous work, no crim record only a few find work.

Our mob admit defeat  at their own crim record & won’t attempt job adverts as result.

Some other important contributions… 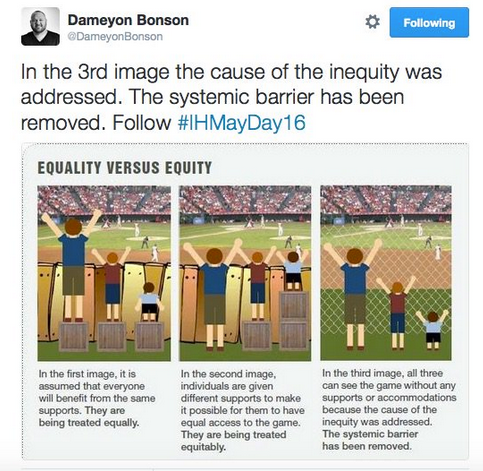 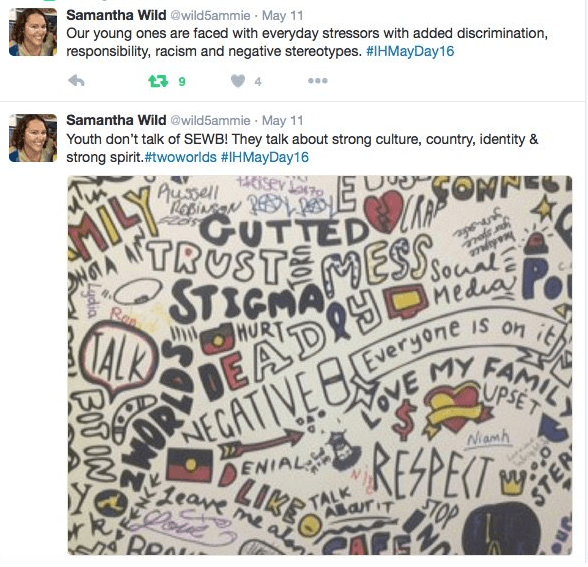 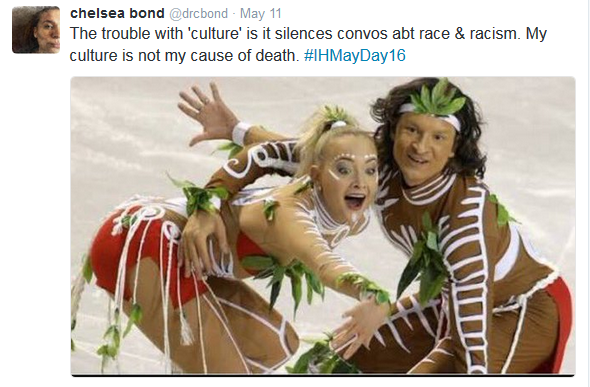 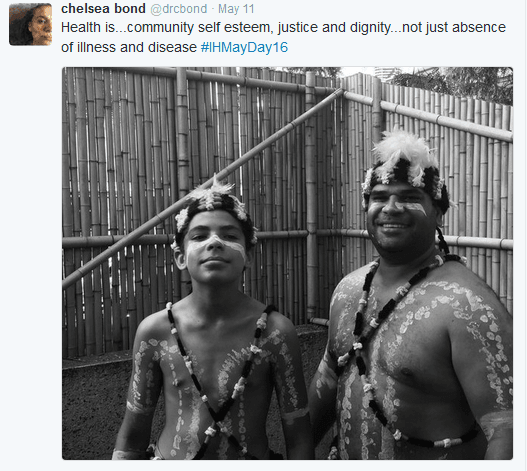 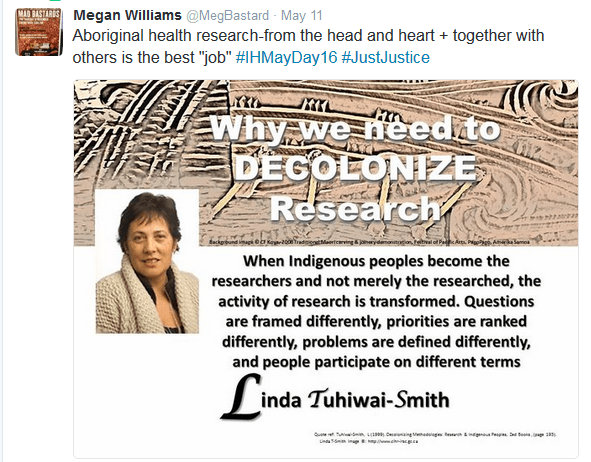 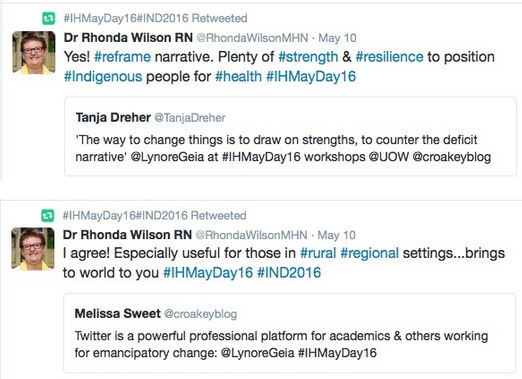 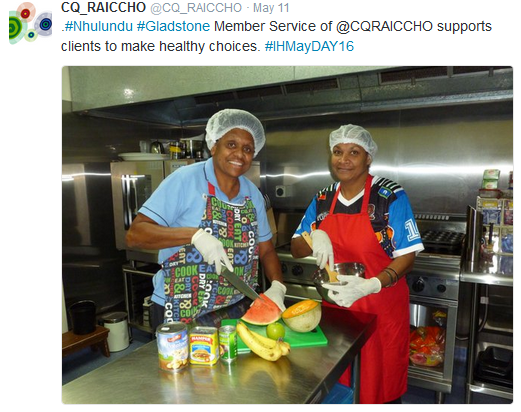 And some Team #IHMayDay16 shots 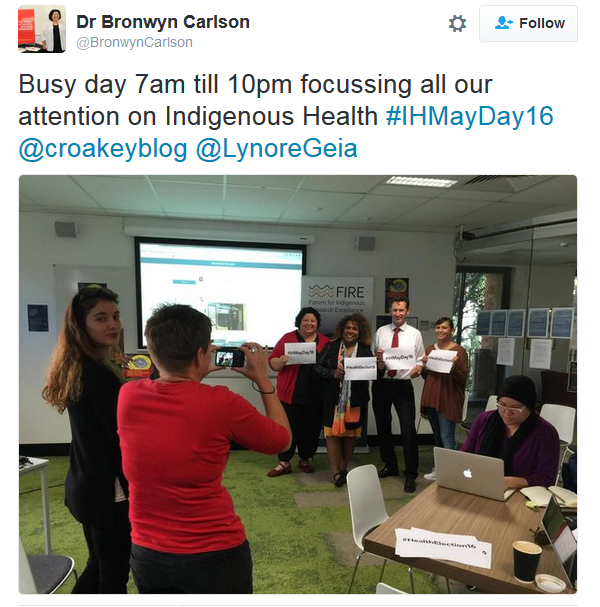 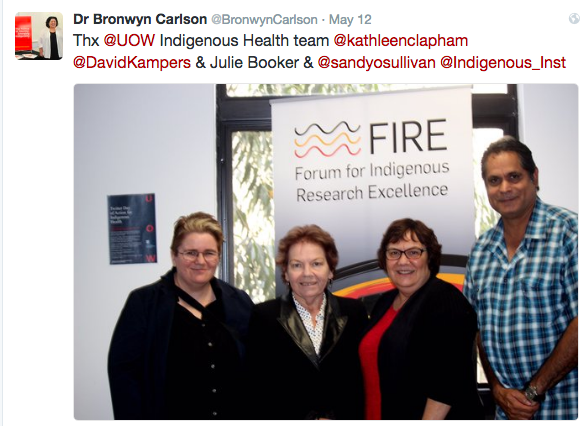 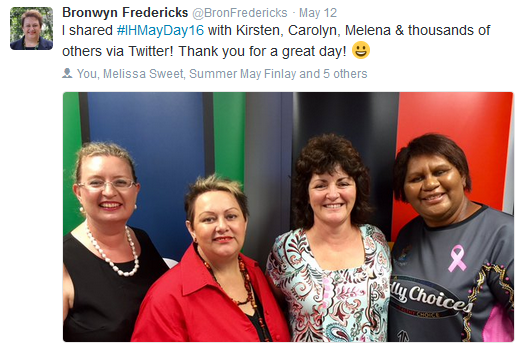 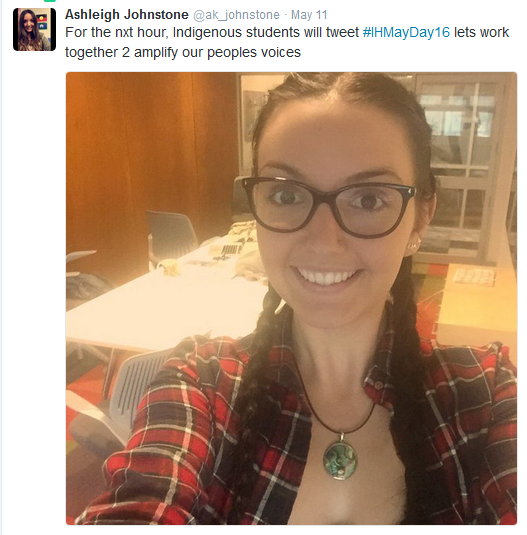 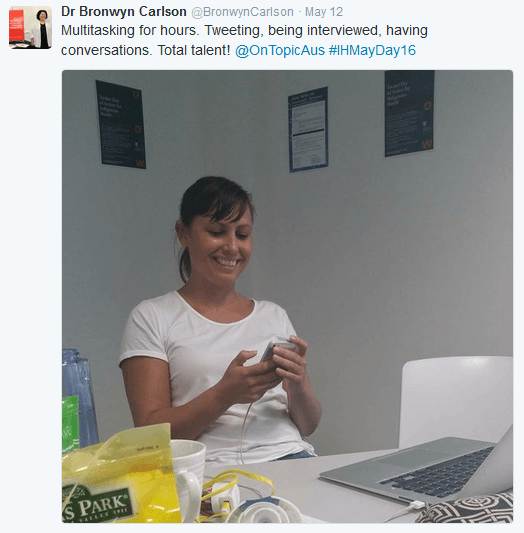 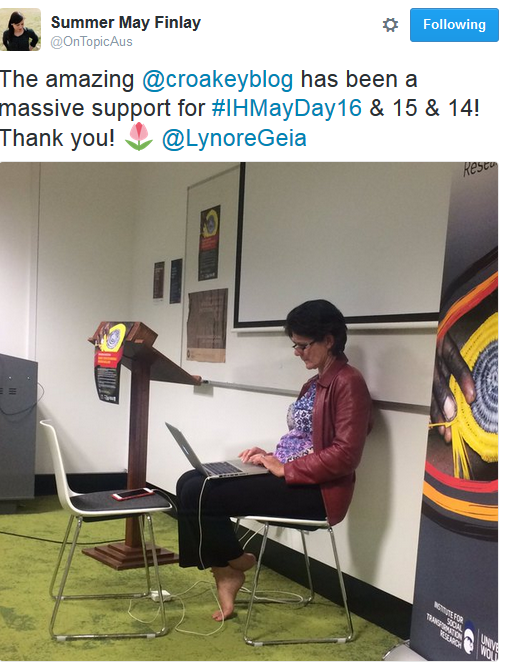 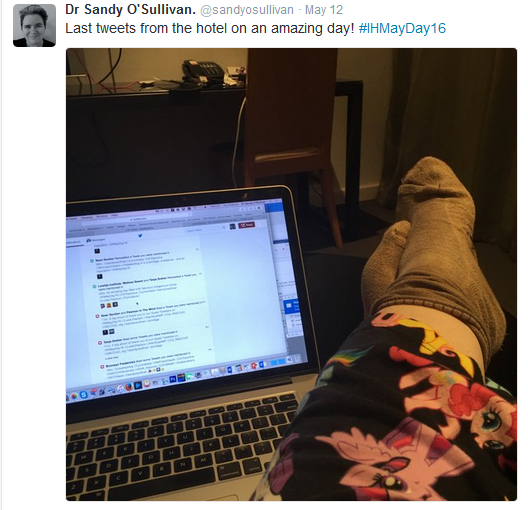 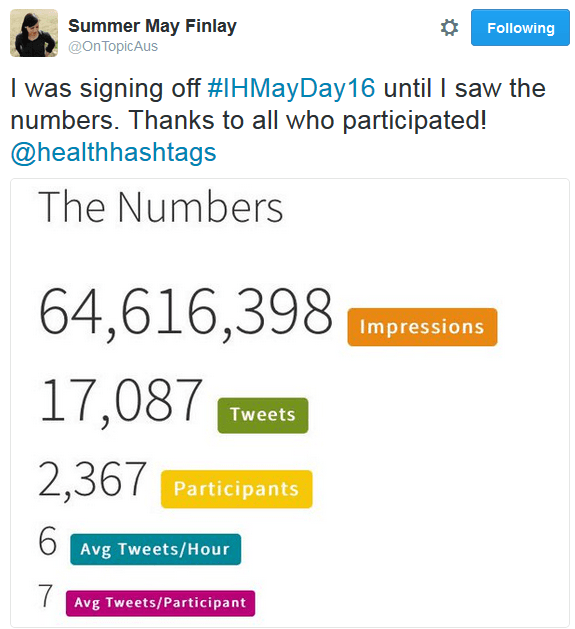 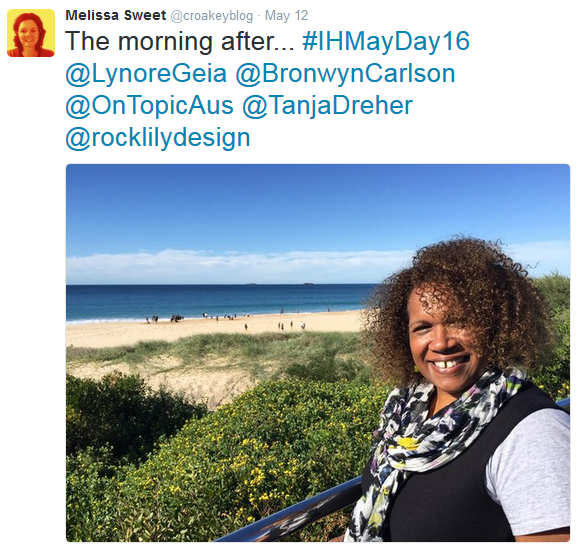 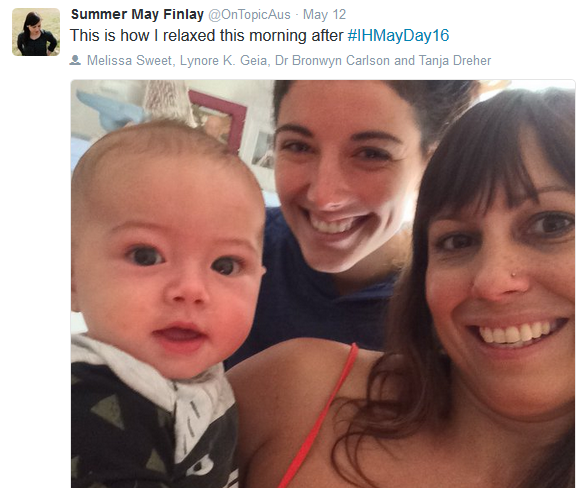