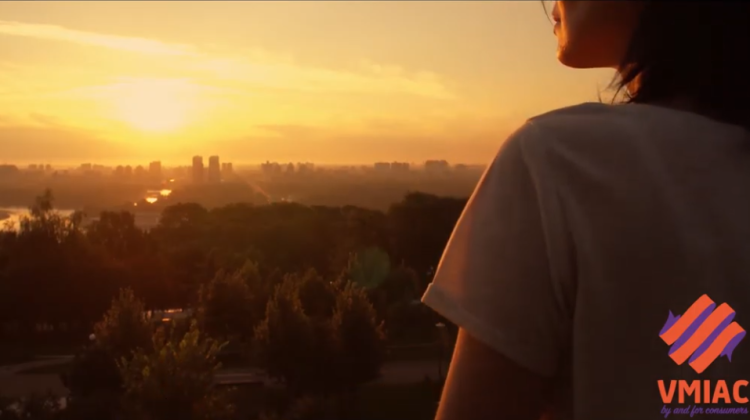 From 'Welcome to our Future', a video from the Victorian Mental Illness Awareness Council (VMIAC)

The Federal and Victorian governments have signalled plans to provide additional mental health supports to Victorians (and any others subject to further lockdowns in future), as Melbourne enters Stage 4 lockdown for the next six weeks.

As well as tough restrictions stopping people from venturing more than five kilometres from home other than for work or to give or receive care, Melbourne residents are also facing more grim news, with further restrictions to be announced on Monday for workplaces, including which ones will have to scale back operations or be shut down.

From midnight on Wednesday, rural and regional Victorians will enter Stage 3 lockdown, meaning they will be able to leave home only for four reasons (work, providing or receiving care, essential shopping and exercise).

Announcing that Victorians would be able to receive 10 additional Medicare subsidised psychological therapy sessions, Federal Health Minister Greg Hunt acknowledged that the extended and expanded lockdown “will weigh heavily on many”.

The news follows a Mental Health Lived Experience webinar hosted last week by Mental Health Victoria and the Victorian Healthcare Association as part of ongoing preparations for the state to implement reforms in the final report of the Royal Commission into Victoria’s Mental Health System, which is due early next year.

You can read a full Twitter thread of the two-hour webinar, or follow broader discussions via the #MHLivedExperience hashtag.

Below, journalist Marie McInerney reports on the event for the Croakey Conference News Service.

Victorian mental health consumers and carers have presented a hopeful and heartfelt vision of a mental health system that works well, with a valued workforce at its core – not just in service delivery but shaping research, evaluation, policy, leadership and governance.

The Mental Health Lived Experience webinar was held as Victoria continued to struggle to contain high numbers of COVID-19 infections, and as experts and consumers warn about the mental health impacts of continuing distress, isolation, and grief in the pandemic.

It opened with a video (below) – titled ‘Welcome to our World’ – produced by the Victorian Mental Illness Awareness Council (VMIAC) and building on its consultations last year with mental health consumers across the state, asking them to imagine a system “that meets their needs and places them at the centre of their own life”.

In the video, consumers imagine a new world of mental health care that recognises that ‘one size doesn’t fit all’, where most acute beds are in an array of community settings and committed to healing “through strengths-based solutions, focused therapies and support”, and nature is recognised as an integral component of healing.

In this future,co-design, co-production and collaboration are the foundation of the treatment service system, and the predominant group of workers are peer workers and therapists who have a holistic approach to therapy, all Medicare funded.

An exciting development, they say, is the establishment of a collaborative centre which brings together consumers, carers, researchers and clinical services to undertake research on the best trauma- informed models of intervention and treatment – with a big focus on the impact of the social determinants of health, including housing and jobs.

And, they say, each person is seen as unique, “regardless of what we call ourselves”, whether it is people with lived experience of emotional distress, trauma, mental health challenges, or neurodiversity.

Asked what lived experience meant to her, Aboriginal woman and panelist Jacquie Gibson said mental health is “a very white fella colonial construct”, which needs to open up to other ways of looking at emotional distress.

When I talk to my Uncle about my experiences, he would describe it as acknowledging how our spirit guides have risen high, so very high, then at times they have been lost.

It is the story of how the spirit comes back to me that makes me and my mob a strong sister or brother.” 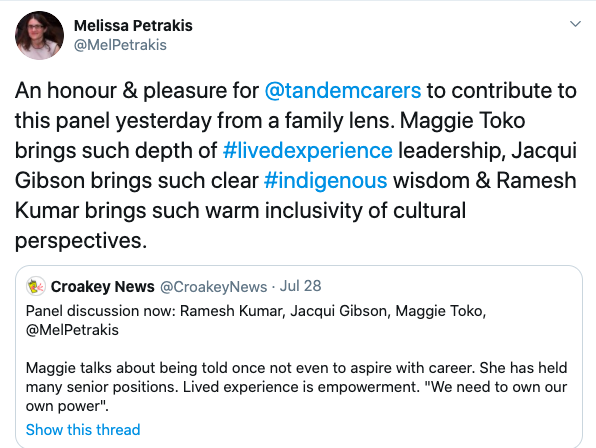 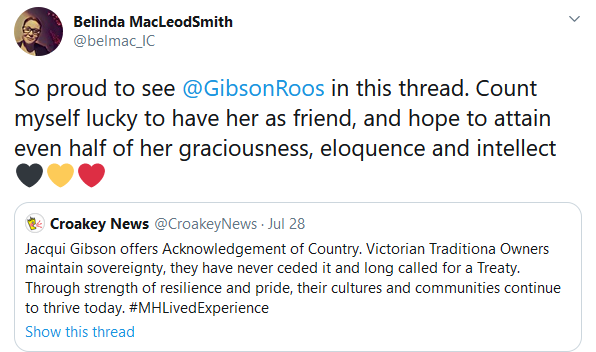 The forum – the third in a series of discussions on mental health hosted by Mental Health Victoria and the Victorian Healthcare Association – had its sights on many failures and harms in mental health service delivery over decades and the promise of reform from the ongoing Royal Commission into Victoria’s Mental Health System.

It came as a new report by VMIAC found that the use of seclusion in mental health facilities in Victoria was rising, and was higher than the national average and worryingly variable across facilities.

VHA CEO Tom Symondson told the webinar: “Often I think we forget we are not providing a system that works for people providing services but for the people who are actually going to use it.”

He warned there is “enormous and growing demand” for mental health services in Victoria, which are being stretched further by the pandemic.

Carer and mental health professional Andrew Tomlinson told that webinar about his experience as the carer of a family member diagnosed with a severe mental illness, and also of working in the system.

“Mental health professionals come to work and go home again. Family, friends and companions don’t, of course,” he said, adding that his professional practice has been “enormously influenced by my personal experience”.

He recalled earlier in his career how the mother of one client was upset when he told her he was leaving for a new job and would no longer be seeing her son.

“I got that she was disappointed but I had no real idea of the impact that had on her, that my connection with her son was suddenly disappearing,” he said.

“When you find a professional who connects with the people you care about, it’s life changing. It brings hope and a sense of no longer being on your own.”

Tomlinson talked about the mental and emotional toll of having to constantly retell the story of a loved one, “feeling a need to ‘sell the situation’” to try to get some help in a system that puts clinicians ahead of consumers, where “it is acceptable to blame the sufferer”.

Describing lack of access to support, he said his family member had spent hundreds of dollars and even crowdfunded treatment options because there was no effective treatment available in the public system. They knew people who had spent thousands of dollars in private treatment, and were still struggling “not only with intransigent illness but debt, lost homes and lost jobs”.

Tomlinson said his work in mental health can help him as a carer, but “at other times I think it causes me to rationalise inadequate care”, adding that he is “extremely conscious of the shortcomings of the system, the gaps and the struggles, and the people who suffer and the people who die because of it”.

Having carers and consumers as “active and respected team members” in reform, “not an add on, an optional extra”, is essential for real reform, he said, urging a “serious shakeup” from the Royal Commission.

Leading carer advocate Marie Piu, CEO of Tandem, also presented a vision for the future, of a “safe, inclusive, fair and funded mental health system” that is “accountability to consumers, families, and friends”. 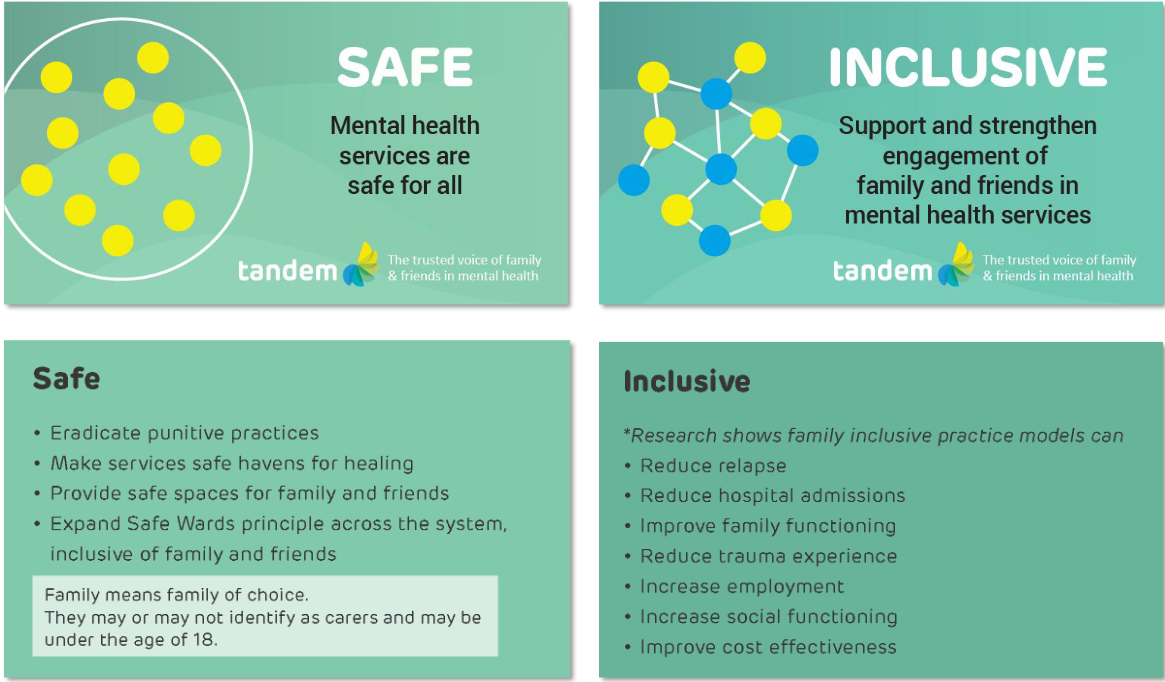 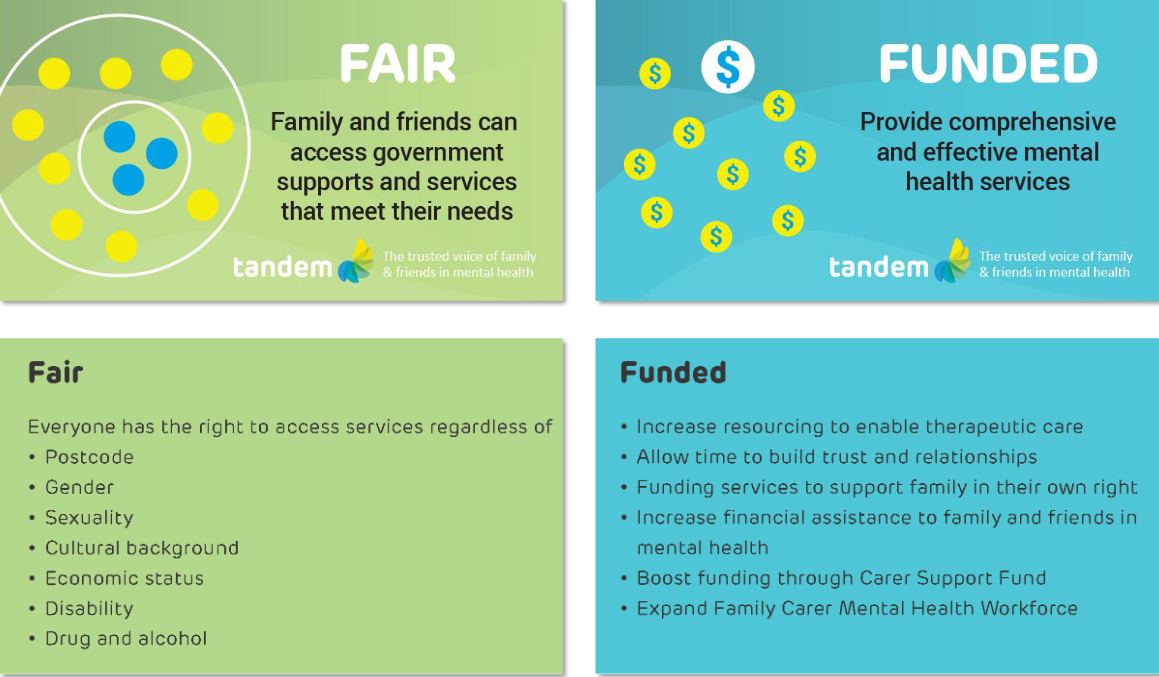 Breakout groups also reported back on a range of system issues and failures, pointing particularly to the need for career pathways for mental health consumers and carers, an end to ‘pilots’, and co-design and co-production, particularly at research and governance levels. 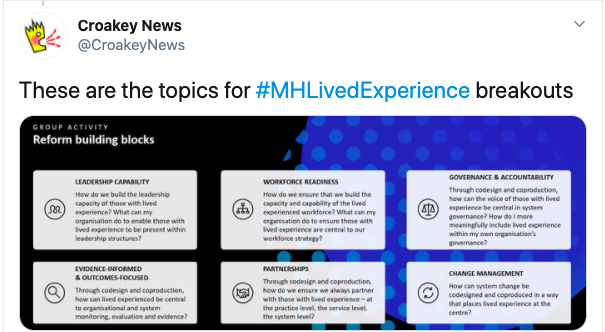 Some of the takeaways

VMIAC CEO Tricia Szirom had warned at the start of the webinar that consumers and carers would not be saying anything new about the challenges, failures and harms they face in the system.

“We’ve been saying these things to services, to reviews, to inquiries for decades,” she said. Some are written up “and they look really good, but unfortunately they are then ignored”,” she said.

Now, she said, it was time for a new future. 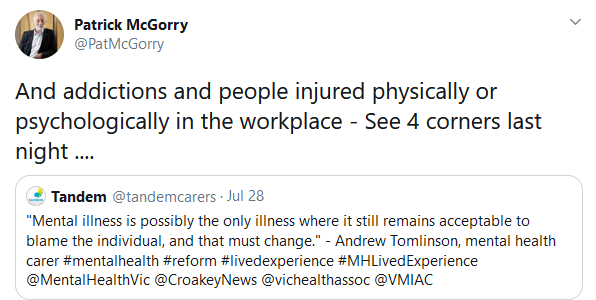 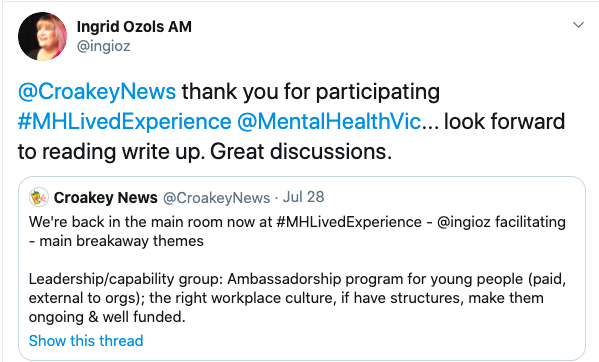 This article was edited after publication and corrected on 11 August 2020.

According to Symplur analytics, 45 Twitter accounts participated in the #MHLivedExperience discussion between 27 July and 2 August, sending 325 tweets, and creating 2.8 million Twitter impressions. 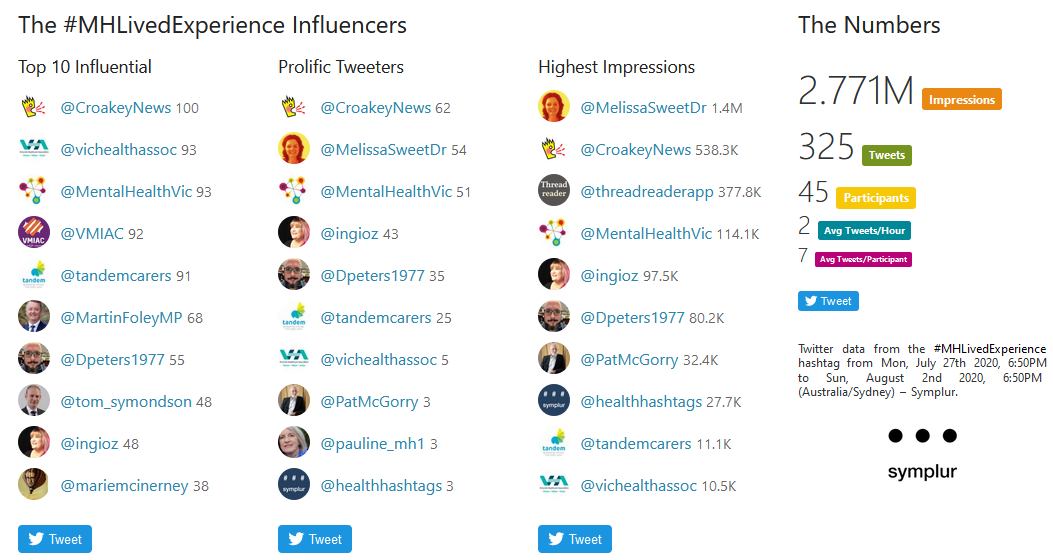