Impact of COVID-19 on childhood neurodevelopmental disorders: the cases of Florence and Boston

This report from Dr Sebastian Rosenberg is the the sixth and final report from a series of e-presentations about the international impact of COVID-19 on mental health.

This e-presentation discussed the responses of two cities – Boston and Florence – to COVID-19, and explored the specific impact of this disease on children with neurodevelopmental disorders, autism and intellectual disability.

The article also includes input from the Coordinator-General of the ACT Office of Mental Health and Wellbeing, Elizabeth Moore, on strategies being used in the ACT to reduce the impact of COVID-19 on people with neurodevelopmental disorders.

Previous webinars in this series considered how COVID-19 had impacted mental health generally. Here, we focused specifically on children with neurodevelopmental disorders, autism and intellectual disability. This followed on from a previous webinar, in which Devora Kestel from the WHO spoke about the significance of this issue.

The presenters in this e-presentation were (L to R below):

Bertelli began first by updating the Italian COVID-19 figures, which as at 20 April indicated that there were 170,000 cases in Italy overall of which 18,000 were health care workers. There have been 21,551 deaths.

Cases were now split evenly between males and females.He explained that Italy had been slow to put in place the necessary protective measures, leaving health workers at high risk of infection.

Bertelli also reiterated the very significant regional differences across Italy, with the north much more affected than the south.  Florence (indicated on map below) and Tuscany, situated in the mid-north of the country, had been quite badly affected but had started later than more northern parts. 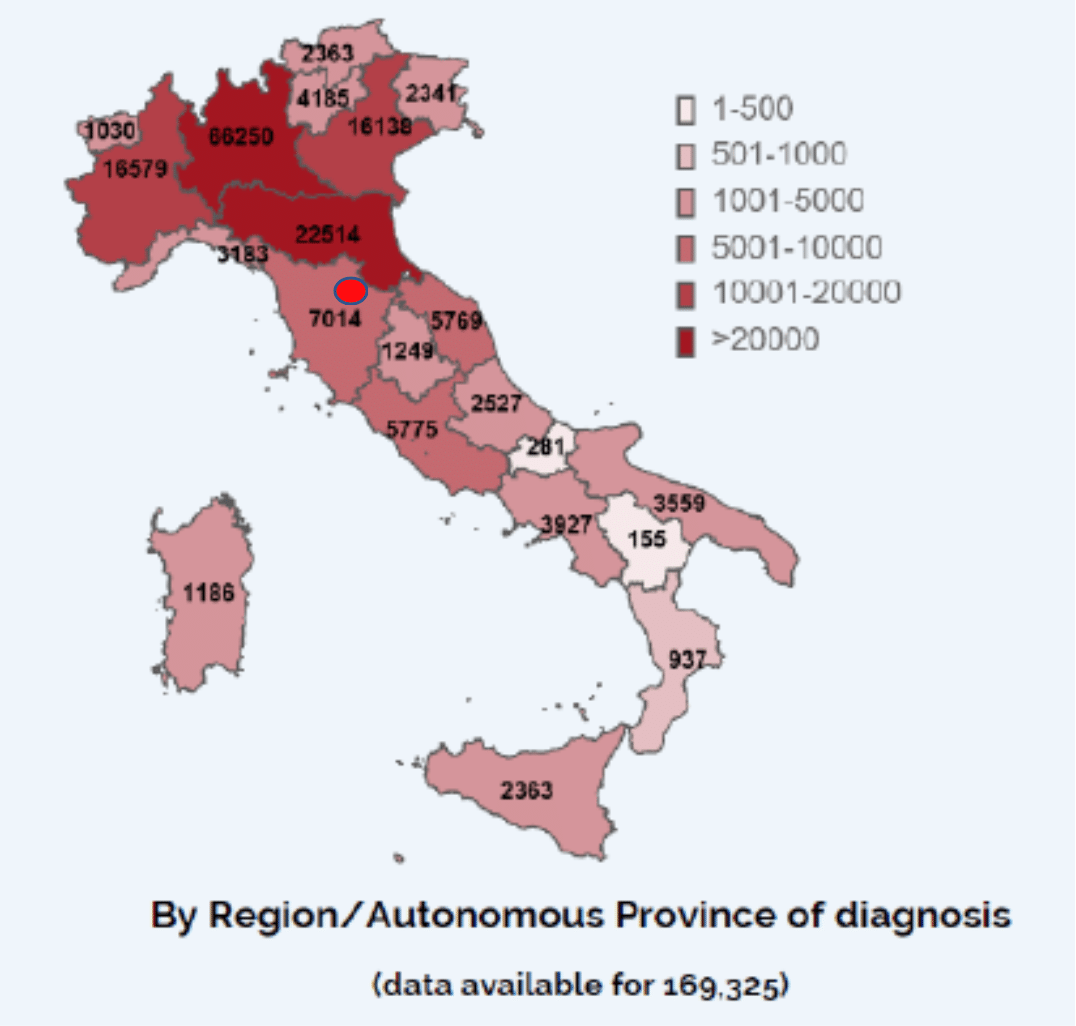 Early data was indicating that by contrast, this rate was between 20 and 50% for kids with neuro developmental disorders (NDD) (also called Intellectual Disabilities ID).

Day care and other services had been closed for some time.

Bertelli suggested several important issues which made kids with NDD more susceptible than others to COVID-19 infection, complications and deaths, including:

It was also suggested that previous experience with SARS and MERS indicated greater susceptibility among people with genetic disorders.

And overall, the incidence of mental illness among people with NDD is much higher, at around 44% than among the general community.

Patterns of medication management had changed, for example extending the times between blood tests for people using Clozapine.

On this basis, Bertelli and his colleagues ran a rapid ‘mini-Delphi’ process designed to develop urgent advice about how best to respond to the needs of kids with NDD during the COVID-19 crisis.

This advice has been developed and now translated in several languages.  The English version can be found here.

Munir stated that a critical moment for his institution was when both the President of Harvard and his wife tested positive for COVID-19.  Data was produced by the Federal Government showing the potentially explosive rates of infection, state by state.

Data have also been produced by the Institute of Health Metrics and Evaluation in Seattle (see example below). 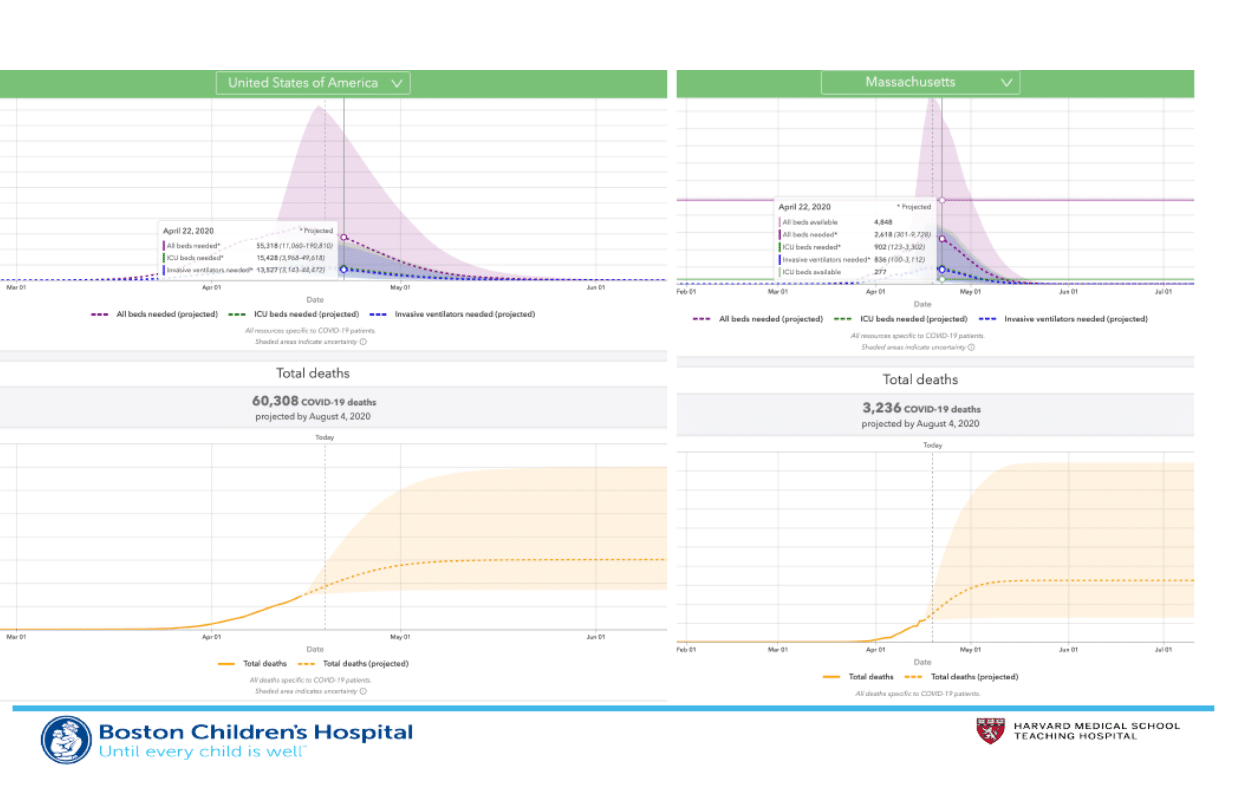 Despite being galvanised to action, early responses were plagued by poor screening, defective testing kits and other problems, especially during February.

It looked like Massachusetts had peaked in terms of cases, on Patriots Day 21 April, the day when the Boston Marathon is traditionally held.  This event has been postponed to September.

Unlike many places across the US, Munir stated that his state had always had access to sufficient ICU and ventilated beds.  The different health system arrangements in Massachusetts combined with the leadership of a responsive (Republican) Governor gave the state some advantages.

Like so many health and mental health services across the world during COVID-19, Boston Children’s Hospital transitioned to virtual visits for non-urgent services.

This had been challenging, requiring resolution of several issues, including the credentialing and privileging of providers, compliance and standards of care and clarifying reimbursement levels and processes.  Overall, the number of visits declined markedly.

However, there were some evident advantages of the new arrangements, including easier access for many clients, new capacity to share online resources, flexibility as well as increasing evidence of efficacy. 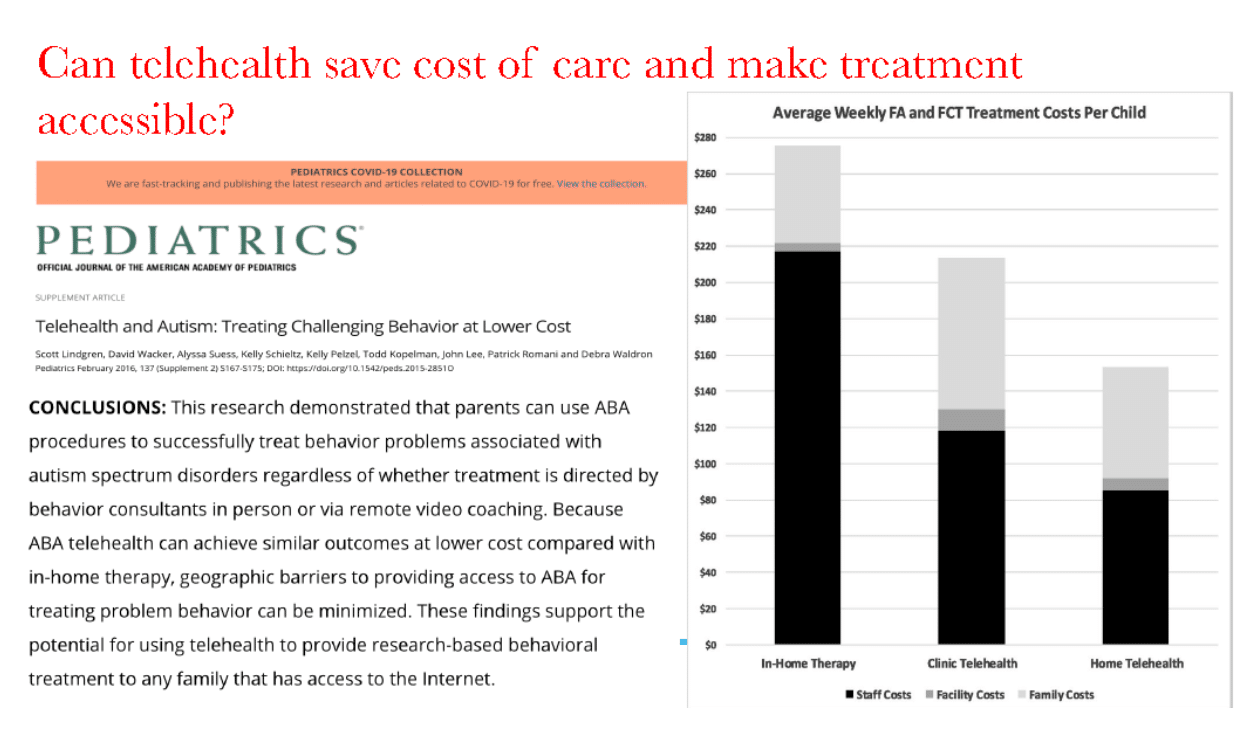 The switch to telehealth

In relation to kids with NDD, the switch to telehealth type services has been profound and will have ramifications for services all over the US.  There was already significant evidence suggesting that telehealth:

One of the keys here was the application of the Early Start Denver method a behavioural therapy for children with autism between the ages of 12-48 months.

Munir said that during this time it was important to provide answers to parents and children about how why changes were being made and how best to maintain care and safety, particularly in the light of the closure of schools and day care facilities. 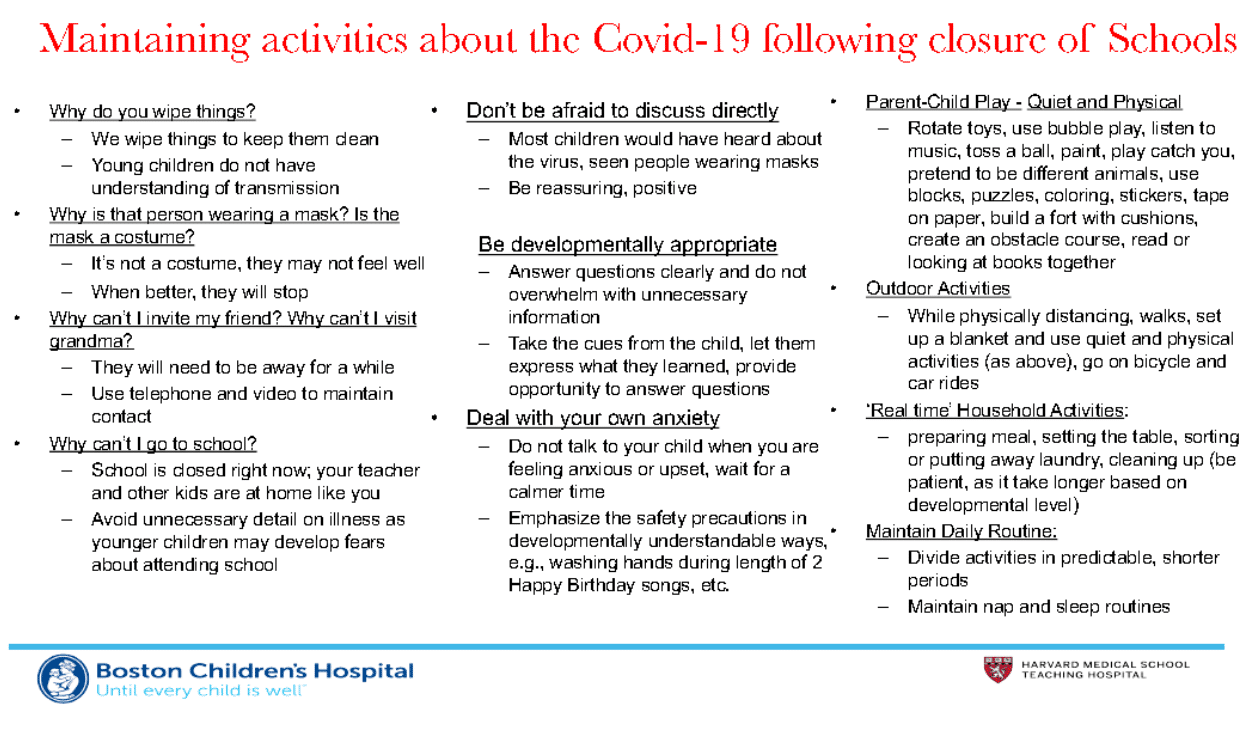 Generally speaking, the impact on older children with NDD was more significant, especially where the child was living in a group home.  COVID-19 meant parents were not able to visit their children and the use of technologies like Zoom was problematic.

By contrast, Bertelli suggested that kids living at home exhibited increased behaviour problems because their routine was more affected than those living in group home situations.

A framework for response

Munir and his colleagues have developed frameworks which permit staff to understand and respond to this situation, for kids of all ages.  These frameworks set out issues concerning developmental and cognitive understanding of change, attachment, loss, separation and death.

Kids of different ages react differently.  Munir gave the example of a 15-year-old boy with autism, fostered, with down syndrome.

Faced with the sudden loss of his mother due to COVID-19 he had regressed in his behaviour due to agitation and grief. The framework provided some assistance in considering how best to respond in these circumstances and devise appropriate supports.

Harvard is of course the home of philosopher Michael Sendel who has raised the question of whether in fact, under COVID-19, we were actually all in this together. Munir stated that it was fortunate that so far, COVID-19 had affected states in the US where discrimination in access to scarce health resources was prohibited.  This was not the case in some states.

Munir concluded by suggesting that for many kids with NDD the issue was about ensuring they had access to multiple supports – tables with more legs can afford to lose some. 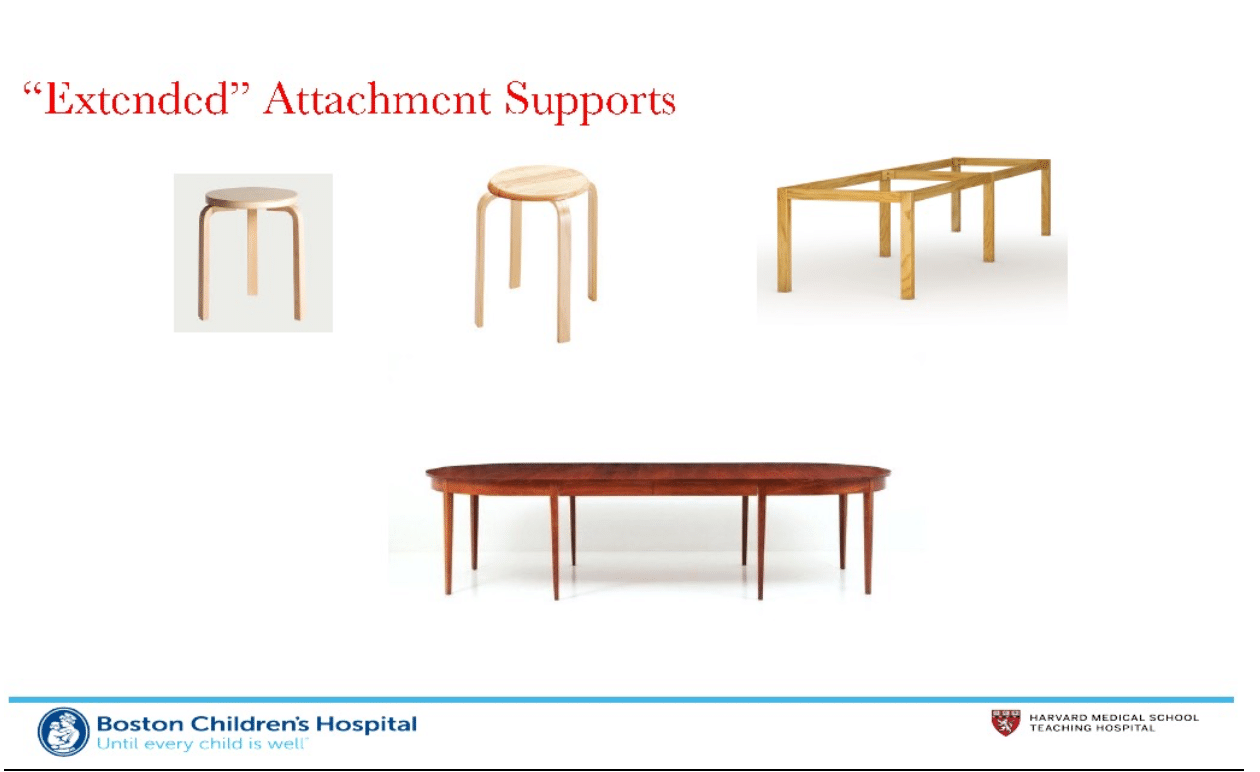 Munir stated that despite the impact of COVID-19 on services in Boston, he was not aware of any leadership council being established to bring together leading providers to articulate the issues and develop a joint response.  The fragmented nature of America’s health system had been reinforced and highlighted by COVID-19.

In the discussion part of this webinar, Kenneth Mort, New York City Mental Hygiene Planning Researcher stated that surveillance data to track the impact of COVID-19 had been very difficult.

Drop in medication use

Medication fills were an important real-time asset, showing that an initial drop in medication use by people with NDD was discernible, but temporary.  Mort emphasised how important it was to get this surveillance data right, married to effective risk modelling.

The Coordinator-General of the ACT Office of Mental Health and Wellbeing, Elizabeth Moore, raised the issue of some parents refusing care for their adult children with NDD because of fear of COVID-19.  She stated that steps were being taken across the ACT, including deployment of the emerging minds website and through distribution of electronic devices to increase connectivity.

Another resource that was referred to was Collaboration for Inclusion

Dr Sebastian Rosenberg was a public servant for 16 years, working in health in state and federal governments. He was Deputy CEO of the Mental Health Council of Australia from 2005-2009. He is Head of the Mental Health Policy Unit at the Centre for Mental Health Research at ANU and holds a position as Senior Lecturer at the Brain and Mind Centre, University of Sydney.

The virtual meeting described above is one of a series of meetings that The Centre for Mental Health Research at the Australian National University and ConNetica Consulting are jointly hosting with mental health leaders around the world to better understand responses to COVID-19.  A recording of the presentations and discussions is available here.

See the previous Croakey articles in this series.