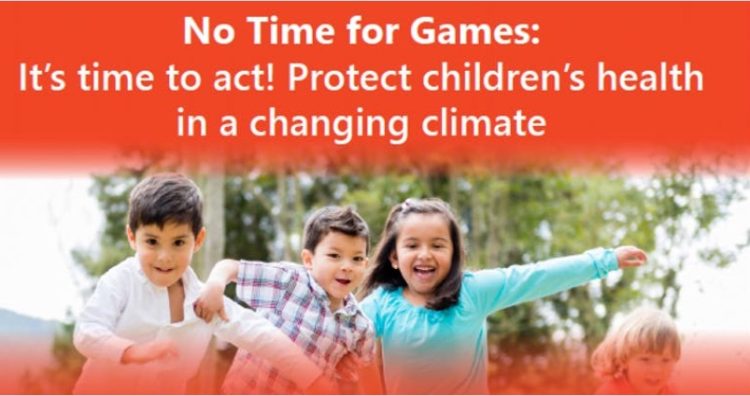 Professor Kingsley Faulkner AM told the conference: "“The profession must use its clout, reputation and influence..."

Impassioned call for doctors to lead on climate change

“We are on the precipice of a real disaster unless we as a nation, as a global community, and certainly as a profession speak up on this issue.”

This was the emphatic message that Professor Kingsley Faulkner AM, chair of Doctors for the Environment Australia, delivered yesterday to the annual scientific meeting of Australian and New Zealand emergency doctors.

In a spirited and gripping session on climate change and health, Faulkner issued an impassioned call to arms to ED doctors on the moral and ethical imperative of climate change, an issue with significant implications for their work.

Meanwhile, the Australasian College for Emergency Medicine (ACEM) announced that the College would divest from fossil fuels.

This was decided at its October board meeting, following calls from members, recent discussions at the Council of Presidents of Medical Colleges and the lead shown by the Australian Medical Students’ Association, said ACEM President Dr Simon Judkins.

In a session devoted to exploring the scope of the problem for emergency medicine and practical steps for individuals and the profession, Judkins said climate change struck at the heart of health as a human right.

“Demands on healthcare and the costs of running a system won’t be sustainable unless we address this issue urgently,” he said.

No time for games

Faulkner, a former surgeon with a long history in the fight for tobacco control, urged ACEM to join Doctors for the Environment’s new No Time for Games pledge, to be launched at Parliament House on November 27. 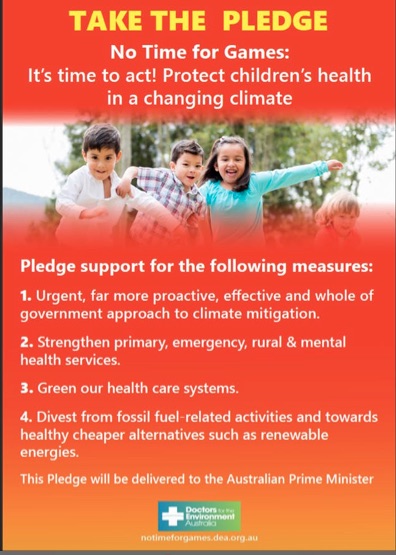 The pledge commits health organisations to do more on climate change, and will be accompanied by the release of a report by the same name, originally published in 2015 and updated for this campaign.

In an interview with Croakey after the panel, Faulkner said:

The profession needs to be more cohesive in its messaging, needs to get its message out more strongly than it has done in the past, and really drive home that this is not only a massive problem, it’s an urgent problem and we cannot delay longer.

It can lead the world, it has led the world. We can do the same in climate change if we’re serious.”

In his talk to delegates, Faulkner said climate change was “not only a moral issue, it’s a major health issue and a significant economic issue”, declaring that if doctors won’t speak up, no one will.

“The profession must use its clout, reputation and influence on this issue – it can make a difference.”

Increased heatwaves, bushfires, floods and storm surges, cyclones and droughts would all bring health impacts that would impact EDs, as the system’s frontline caregivers.

Presentations of heat stroke and heat exhaustion, dehydration, burns and smoke inhalation would increase, along with drownings, injuries, and exacerbations to chronic diseases of the heart, lungs and kidneys.

This was already happening, particularly with heat waves, he said, with deaths due to heat in Australia increasing over the last century, and mass casualty events already on the record books.

The heat wave accompanying the 2009 Black Saturday bushfires in Victoria had claimed more than double the number of lives (384 compared with 173 in the firestorm). During that event, there had been 414 presentations to Victorian EDs over a 72 hour period, Faulkner said.

Food security and nutrition would present a growing issue, and patterns of infectious disease, allergens and venomous creatures would all shift as a result of global warming.

Trauma, mental health and ‘solastalgia’ – a sense of loss of place due to environmental destruction – were less obvious but no less insidious health risks, he said.

The air pollution driving climate shifts was already killing hundreds of thousands of people every year – 3,000 in Australia alone – and would present an ongoing burden to health system, with the coat of burning coal estimated at some $2.6 billion per annum.

John Nairn, leader of the Bureau of Meteorology’s heat program, presented some of the science demonstrating that climate change was already upon us and, even with emissions reductions, warming and drying would continue.

Low intensity heatwaves had increased across every part of Australia – most significantly in Perth – and severe or extreme heat events had risen markedly in Adelaide, Melbourne and Darwin.

Though Australia’s inherent climate variability masked some of the shifts, Nairn said the extremes were becoming more extreme, rains were starting later in the season and falling for shorter periods, the Murray-Darling basin was suffering and ranges for our fauna were increasingly restricted.

Every one degree temperature increase boosted the amount of water in the vapour column by seven percent, with increased rainfall already overwhelming unfit-for-purpose infrastructure in our major cities – an issue that was only going to become more acute.

Health emergencies like thunderstorm asthma, bushfires and heatwaves would become more frequent and more severe, Nairn said, but perhaps more concerning were the as-yet unimaginable consequences of “cascading events” in the new climate.

He said: “You’re going to get surprises.”

Professor Gerry FitzGerald from QUT’s Centre for Disaster and Emergency management cited the findings of the Lancet Commission on Health and Climate Change that the projected course of global warming presented an “unacceptably high and potentially catastrophic risk to human health”; that tackling it could be the greatest global health opportunity of the 21st century; and that the health community had a vital role to play in accelerating progress.

FitzGerald said there would be direct and indirect impacts on health, largely driven by exacerbation of chronic disease, evolution of pathogens and changes to the way allergens were released.

He echoed Faulkner’s sentiments on heat waves, saying they were already the biggest killer in Australia in disaster management terms after pandemics, and were associated with increased mortality, ambulance callouts, and presentations to ED.

He also foreshadowed major social disruption: poverty, displacement and threats to food and water security, as presenting real consequences for doctors and their patients.

Asking ED doctors whether they were content to be “the ambulance at the bottom of the cliff”, FitzGerald said climate change would increase demand on their services, squeeze staffing, supplies and security, as well as direct damage to infrastructure from extreme weather events.

In terms of what they should do, FitzGerald said EDs needed to be prepared for what was coming, in terms of surveillance, planning, equipment and surge capacity.

He said Australian and New Zealand doctors also had an obligation to come to the assistance of our neighbours in the Asia-Pacific, many of whom were far more vulnerable to the effects of warming and less prepared and resourced to respond.

More broadly, he said doctors needed to educate and advocate on behalf of their patients, and speak together, loudly and in concert with other health groups as a credible voice on this issue. 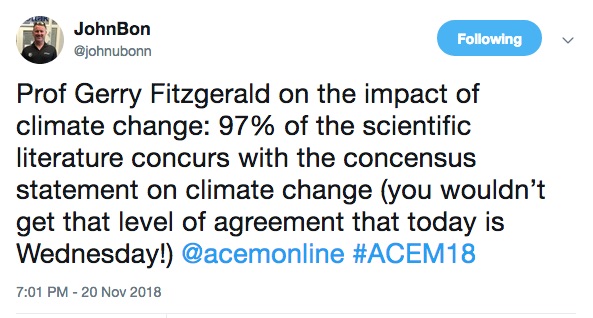 Dr Omar Khorshid, an orthopaedic surgeon and federal councillor with the AMA, echoed these calls.

“This is our space as a profession, and we have a very clear responsibility to act and lead,” said Khorshid, calling for doctors to lead by example, including at their own hospital and health service, and as individuals.

The session debated scores of solutions, ranging from the drafting of an open letter to the government from the College, through to internal environmental awards, greater pressure on suppliers to recycle and reuse, and reducing use of volatile anaesthetic gases that were damaging to the atmosphere. 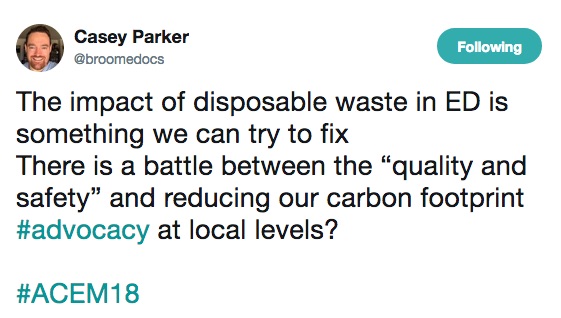 Other solutions discussed included sustainability targets for health services and reduction of unnecessary tests to decrease the burden of petroleum-based pathology plastic and fuel used for transport and analysis.

As a wealthy profession, individual doctors were encouraged to put their money where their mouth was and support groups like the Climate Council, install solar panels and drive electric (or not at all).

Humphrey said doctors should be as comfortable talking with their patients about the impacts of climate change as they were about smoking cessation.

With AMA research suggesting about 30 percent of doctors were climate sceptics, or didn’t think medical groups should take a positions, Humphrey said it was just as important to talk to colleagues about the issue as to lobby politicians. 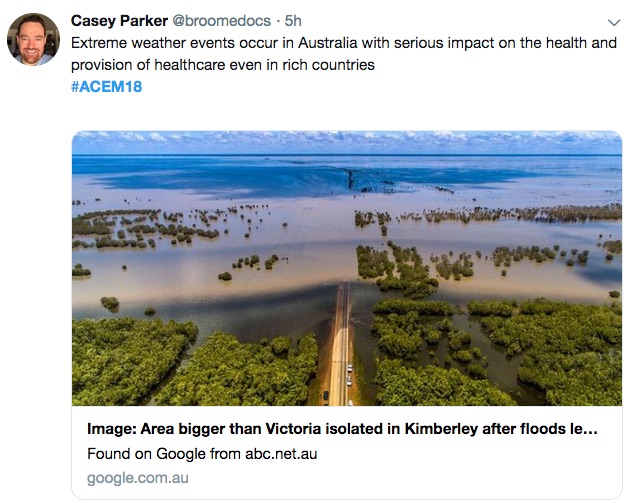 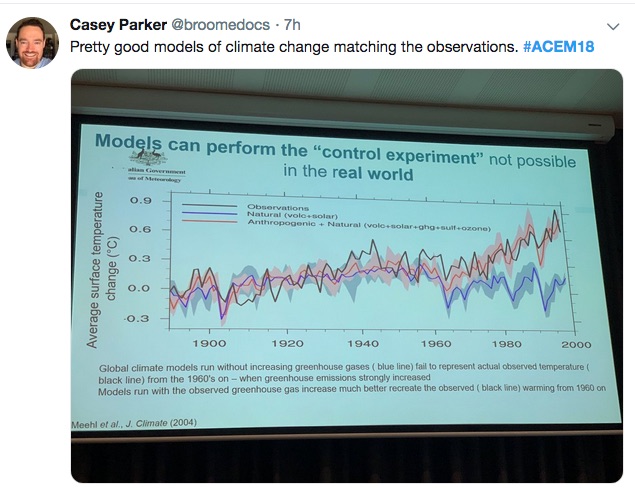 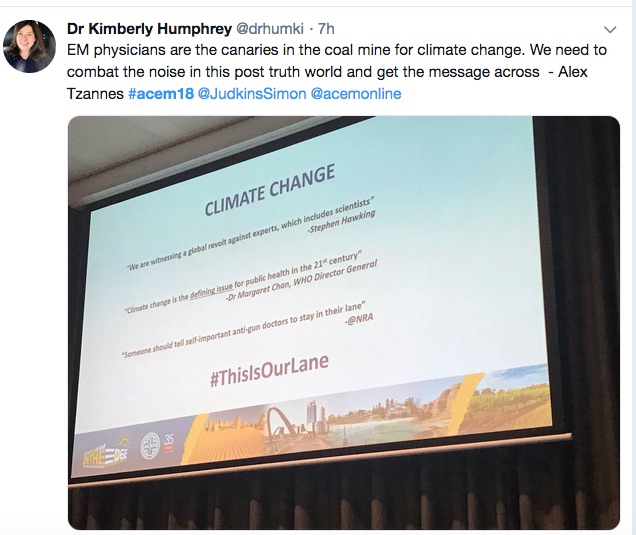 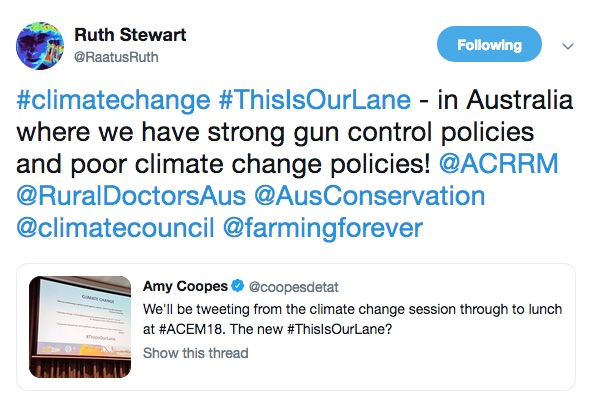 PrevPreviousA declaration on role of culture and self-determination in suicide prevention
NextProfiling health, justice and community concerns ahead of #VicVotesNext