Important for mental health: a fair society and a good start to life

Continuing a Croakey series on mental health reform, this post touches on the importance of policies that support healthy early childhood development and equity.

Professor Helen Keleher, president of The Public Health Association of Australia, has argued that mental health would benefit from a much greater focus on intervention in early childhood, particularly among the 15 to 20 per cent of children who live in poverty, and on supporting parents.

“If we could do anything for mental health, it would be free, early childhood centres. Preschool should be free, and therapeutic interventions like speech therapy, occupational therapy, podiatry and vision, should be free and universally available — which they’re not currently,” she says. “We need to be intervening as early as we can, within a social model of health.”

Meanwhile, many are mourning one of the leading international proponents of the importance of early childhood for lifelong health, Dr Fraser Mustard, who died recently in Canada.

He was well known to many in Australia, particularly for his work as Thinker in Residence in SA in 2007, when he wrote a report stating that “the exponential growth in knowledge in the neurosciences and biological sciences has shown how brain development in the early years can set trajectories that affect health (physical and mental), learning and behaviour for life”.

The recent passing of the Canadian Dr Fraser Mustard may not immediately seem of great interest to Australians.

However, his influence on early childhood programs in Australia is worthy of note.

His seminal reports have laid out the critical importance of investment in quality early childhood programs. He visited Australia in the early 2000s, speaking with Cabinet Ministers and other decision-makers, who were persuaded by his presentations.

Funding for new early childhood programs included ‘Best Start’ in Victoria and ‘Families First’ in NSW, which continue to this day. He was Adelaide Thinker in Residence in 2006-7 producing the report: Investing in the Early Years: Closing the gap between what we know and what we do.

It is timely with his passing, to reflect on how well we are, or are not doing in Australia, with investments in early childhood, particularly those in the more vulnerable families of our society.

There remains a great deal of unmet need for therapeutic and more play-based therapies for vulnerable children to ensure they are given the best opportunity we can provide, for a healthy start to their young lives.

We must continue to advocate for universally available, no-cost high quality pre-school for 3 and 4 yr olds.

We must also advocate for cash transfers to the poorest families to lift children from dire poverty which causes the food insecurity, undernourishment, and lack of stimulation which we now know, is so damaging on the brain development of young children.

Let us always remember the magnificent contributions of Fraser Mustard and continue to work for the health and welfare of all children, to continue his legacy.

An interview with Fraser Mustard

It’s well known that a nation’s inequality leads to poor health for its citizens. That’s why, for example, the US is a very wealthy nation with the health standards of Costa Rica (World Health Organization 2011).

Now there is evidence that inequality has a similar impact on mental health.

Why? It’s not certain, but it may tie in with how people feel about themselves. Poverty brings significant issues, but if everybody is poor, then there’s some comfort in knowing that others are in the same boat, and it may well bring a sense of community. But if some are rich and others are poor, then it’s easy to harbour resentment externally and self-doubt internally. Pressures build, adding to whatever genetic and psychological vulnerabilities already exist. That may seem too straightforward, and perhaps it is, but there’s at least some truth in it.

The same pattern appears if you look at child wellbeing in wealthy countries. The more equal the country, the better off are its children.

The report also includes these tables from The Spirit Level, Why Equality is Better for Everyone. 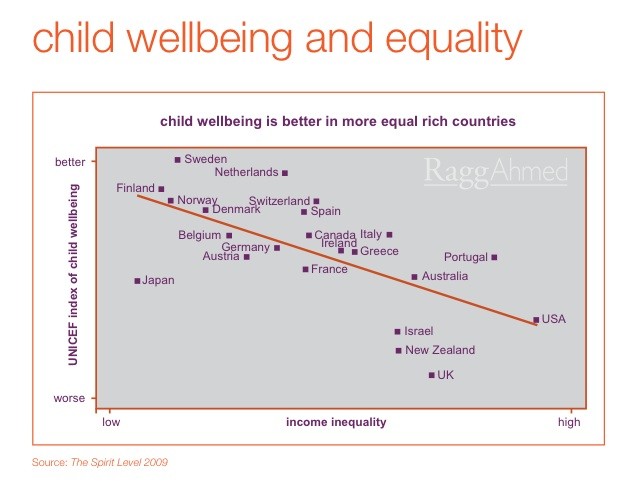 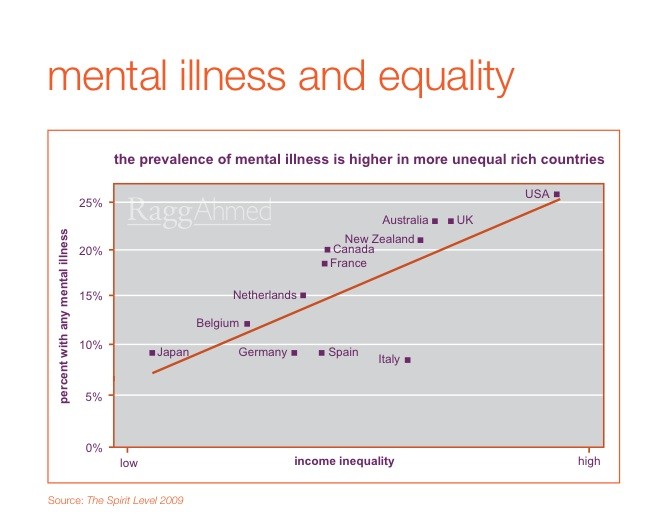 Anne-Lise Prigent, editor in charge of development publications at OECD Publishing, has called for a new policy agenda that “focuses not only on growth but also on openness, fairness and inclusion”. She writes that the trouble with growth is that inequalities tend to rise with it.

“Social cohesion needs to be at the centre of policy making,” she says. “The challenge is to leave no one behind. A cohesive society reduces inequality between groups and ensures that all citizens – the poor, the middle-earners, and the rich – are socially included.”

The OECD Development Centre has published a report looking at how governments can foster social cohesion: Perspectives on Global Development: Social Cohesion in a Shifting World.  It argues that public policies can make a difference. OECD countries with initially high income inequalities manage to redistribute income through taxes and transfers.

Previous posts in this series:

• What matters for people living with psychotic illness