Improving Aboriginal and Torres Strait Islander healthcare: some of the successes and challenges

Continuous quality improvement (CQI) is emerging as a major success factor in improving Indigenous primary health and health care in Australia – but sector leaders say there must be consistent national support as the benefits are not being spread evenly.

Samantha Palmer, first assistant secretary for the Indigenous and rural health division in the Federal Department of Health, told the conference that analysis of national key performance indicators to be released in May will show that CQI is “one of the fundamental factors of difference between services that are doing very well and services that are not doing so well”.

“So CQI has a lot of support in the Commonwealth at the moment,” she said, acknowledging that much of this work is “sector led and sector driven”.

But she agreed with sector concerns that there is “enormous variation in implementation and success on the ground”, not only in the Aboriginal community controlled sector but also across the mainstream sector.

Her comments came in the first session of the 2nd National Conference on Continuous Quality Improvement (CQI) in Aboriginal and Torres Strait Islander Primary Health, which looked at successes and challenges across the country. Indigenous health leaders said CQI required significant resources and can’t be implemented as an “add on”.

Palmer said the department was currently “looking to find ways to expand” one of the first quality improvement initiatives it had funded: the Healthy for Life program that collects data from about 100 Indigenous primary health care sites across Australia on essential health indicators and others relating to organisational structure and care provision.

It was also seeking tenders to analyse and synthesise current CQI activity across Australia, including research and evaluation in Aboriginal community controlled organisations and mainstream services. The aim would be to “identify whether a system or national, local or regional enablers and approaches could be developed into a (national) CQI framework”.

Noting that the department had funded a range of quality improvement initiatives over the past decade, Palmer said:

“I think it’s important to say that the more we’ve done this, the more we’ve recognised the great value of it. Embedding QI driven approaches and collaborative approaches are the key, we think, to improving primary health care and moving to a preventive cycle that is really going to make all the difference across all parts of the system.

We recognise that, because of the great diversity and flexibility of the system, we need to find a way as a department to support that at many levels across the system as well.”

It is the only jurisdiction currently on track to close the life expectancy gap by 2031. The implementation of CQI programs had been “pivotal” to that, said John Paterson, CEO of the Aboriginal Medical Services Alliance Northern Territory (AMSANT).

Paterson said the Territory had benefited from strong CQI leadership across both the government and Aboriginal community controlled sector through the NT Aboriginal Health Forum that had guided the introduction of key performance indicators, the development of a core services approach and an agreed regionalised health service delivery model.

This was a point also reinforced by the tweeting Aaron Hollins in his presentation: 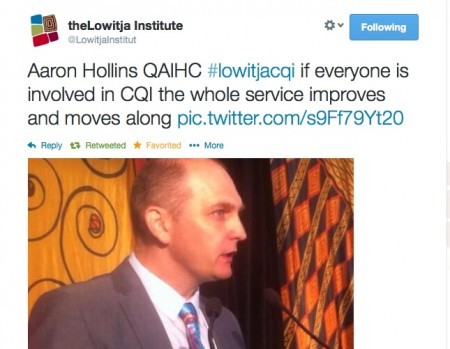 National Aboriginal Community Controlled Health Organisation (NACCHO) CEO Lisa Briggs said those improvements had to be pursued nationally. “We now need to ripple that right across Australia,” she said.

Briggs is calling for a consistent model of service across every Aboriginal community controlled health service. 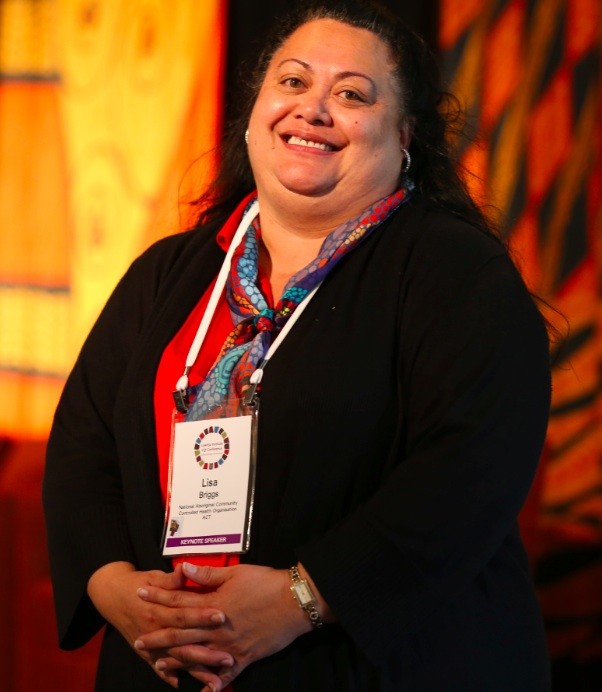 “The only way that’s going to happen is if the government invests at the same level where it has invested in sites in the Northern Territory, and in Queensland that have also showed positive health gains,” she said.

NACCHO would be stepping up its argument on April 2 at the National Press Club, she said, where it will outline the economic value of Aboriginal community controlled services to the wider health system. “You’ll see why we are the most cost-effective, performance outcome and health gain driven model in the country,” she said.

“The NACCHO Healthy for Life Report Card for 2013 clearly shows our services were able to reduce child mortality by 66 per cent, and overall Aboriginal and Torres Strait Islander mortality by 33 per cent. You don’t get these types of health gains unless you’re delivering a good quality service model. But if they want us to reach further targets, they need to invest in cost effective ways.”

Data quality remains a big gap. “We need to scope it, put it strongly within a national framework and make sure there’s consistency across all our services to be able to provide the information in the quality the government needs to invest in our services.”

One of the factors behind better health outcomes may include duration of CQI participation, according to a study of the variation in quality of type 2 diabetes service delivery in Indigenous primary health care conducted by the Menzies School of Health Research.

Veronica Matthews said the study analysed more than 10,000 clinical audit records of patents in 132 community health centres that had participated in the Audit and Best Practice for Chronic Disease (ABCD) project between 2005 and 2012.

Significant factors associated with higher levels of services included longer CQI experience, the remoteness of centres, and regularity of patient attendance, she said.

Meanwhile, reporting from the Twitterverse… 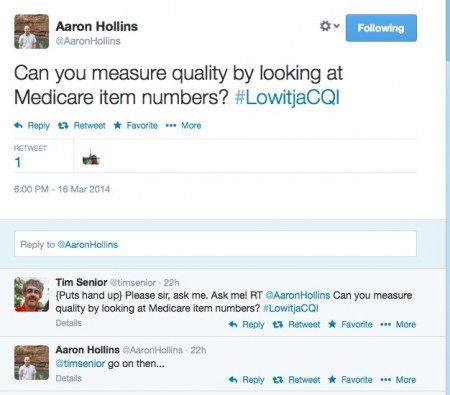 CQI is the star of the show at the two day conference but it was truly overshadowed by opera diva and Yorta Yorta woman Deborah Cheetham and her Short Black Opera colleagues  Shauntai Batzke, John Wayne Parsons, and Tiriki Onus for the official opening of the event.

In an incredible early morning performance, they sang a selection of songs, including the creation song from Cheetham’s Pecan Summer – Australia’s first Indigenous written and performed opera.

Telling the legendary story of the walk off the Cummeragunja mission in Victoria in 1939, it’s sung in part in the language of the Yorta Yorta (and will be staged once more in Adelaide in July). 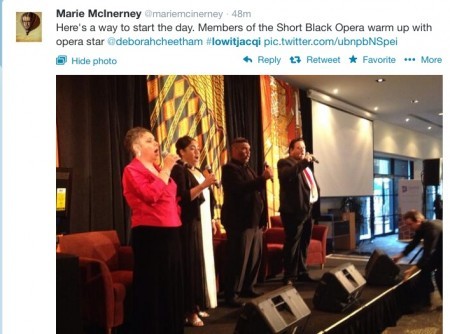 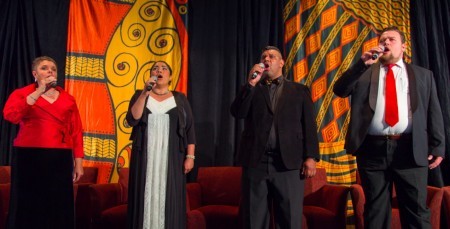 Onus has his own family connections to the Cummeragunja walk-off, which he explored in a one-man show at the recent Melbourne Indigenous Arts Festival.

Cheetham said that she often gets asked by non-Aboriginal people why she found her way to opera, which “doesn’t have anything to do with Indigenous culture”.

“I say: Aboriginal people invented opera. 70,000 year ago we started singing our story.”

And thanks to all the conference tweeters for working so hard! Some conference snaps follow…. 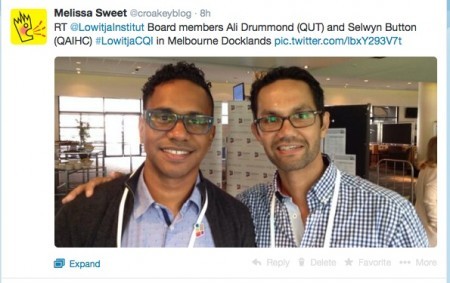 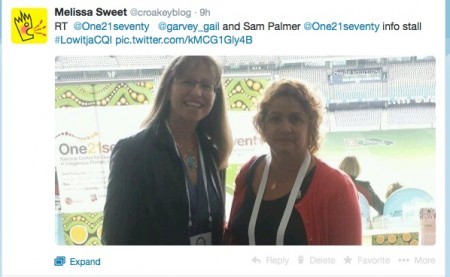 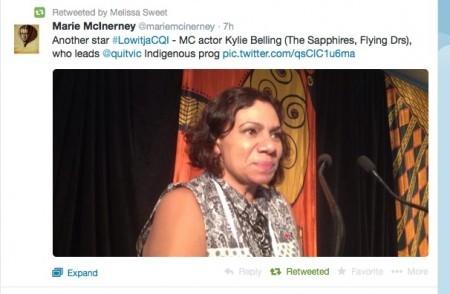 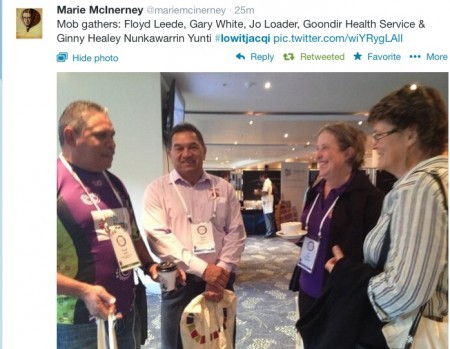 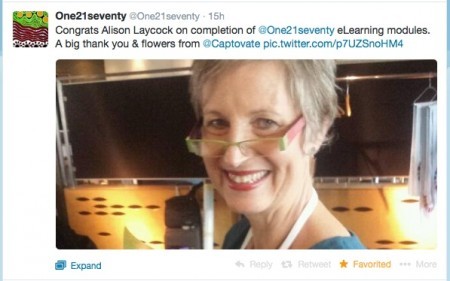 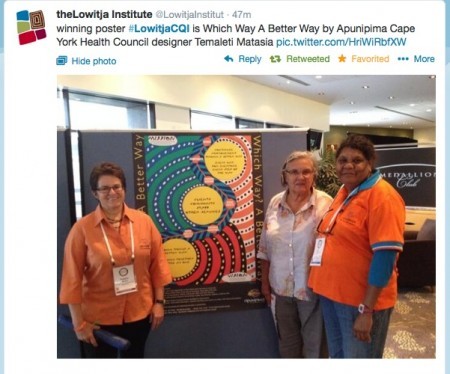 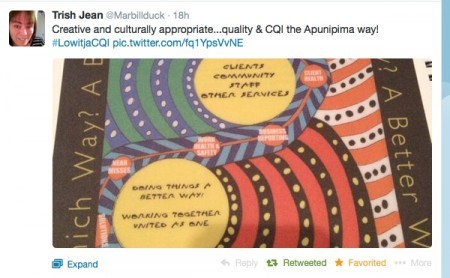 And watch this clip, where Kylie Belling wraps up some of the discussions…

And an interview with Lisa Briggs…