In a time of need, the Lowitja Institute is asking for your support

The Institute’s Chair, Patricia Anderson, writes below that the Institute has a strong record of achievement, and she encourages Croakey readers to support a campaign urging the Federal Government to continue funding to the Institute.

Just over four years have elapsed in the Closing the Gap program that represents the commitment by all Australian governments to improve the lives of Aboriginal and Torres Strait Islander Australians.

Tangible progress is being made and there are positive signs in some health indicators. For example, the reduction of mortality rates for Aboriginal and Torres Strait Islander children under five.

However, this program stretches out to 2031 and much work remains to be done. Now is not the time to pull back on either funding or effort.

Within the space of a week in February this year Prime Minister Julia Gillard made two key parliamentary addresses focused on her Government’s commitment to Aboriginal and Torres Strait Islander people: the fifth annual Closing the Gap Statement, and her debate speech introducing the Act of Recognition into the House of Representatives.

Both speeches were notable for the bipartisan support they attracted from across the political divide, reflecting the building groundswell of national support for improving the lives of Australia’s First Peoples and achieving lasting reconciliation.

How could this be?

The Institute was established in 2009 initially as the host organisation for the CRCATSIH but with the ultimate aim of becoming a permanent facilitator of research into Aboriginal and Torres Strait Islander health when CRC funding expires in June 2014.

And herein lies the dilemma. Under the rules governing the Commonwealth’s CRC program, no CRC can be funded for more than three terms – and so there is no possibility of further allocations to the Lowitja Institute’s hosted CRC.

Knowing this, the Institute also put in place a clear strategy to seek funding for a permanent institute beyond 2014 from the private and philanthropic sectors. However, in 2009 not many foresaw the severity or extent of the international financial calamity of 2008 and the implications this would have for budget bottom lines, and thus for fund-raising.

Despite this, our representations to government to secure ongoing funding continue in earnest and we are confident we will ultimately succeed in establishing a permanent and independent future for the Lowitja Institute.

Over the past 16 years we have provided vital financial and in-kind support to more than 200 research projects focused in areas such as chronic conditions, the social determinants of health and primary health care.

To cite just a few examples, this research effort has led to new ways of treating scabies (a prime causative factor in rheumatic heart disease), new approaches to the provision of mental health care in remote communities and the establishment of a network of more than 200 health centres across Australia using innovative continuous quality improvement tools and techniques.

Our work has contributed to the setting of Closing the Gap health goals, especially in the area of chronic conditions and tobacco consumption. For instance, a Showcase we helped organise at Parliament House in Canberra in 2008 influenced the Federal Government’s subsequent decision to invest $100.6 million in its Tackling Indigenous Smoking strategy.

Most recently, our support has contributed to the establishment of a National Indigenous Cancer Network (NICaN) and a Centre for Research Excellence in Aboriginal and Torres Strait Islander Cancer, and our funded research continues to inform the Closing the Gap program.

The Lowitja Institute is currently funding a range of projects across three program areas, including the clinical trial of a Streptococcus vaccine, a study of Aboriginal child mortality in Victoria, a national appraisal of CQI initiatives in Indigenous primary health care and a review of government efforts to improve funding and governance arrangements for providers of primary health care in Aboriginal and Torres Strait Islander settings.

Just as importantly, our early work on how best to undertake Aboriginal and Torres Strait Islander health research has contributed to improvements in the way research is conducted outside the Lowitja Institute.

Our emphasis on community involvement in the development and approval of research proposals has ensured that our funding is focused on community priorities, and this approach is now used widely.  We believe we have, in partnership with the community controlled sector and other partners, changed the way in which Aboriginal and Torres Strait Islander health research is undertaken in Australia.

We also have a strong commitment to ensuring research findings are translated into practice through knowledge exchange, principally through collaborations with our 14 research partners but also through workshops, roundtables and headline events such as the biennial Congress Lowitja.

Our most recent Congress Lowitja was held at the Melbourne Cricket Ground (MCG) in November last year and was in fact focused on the twin themes of Knowledge Exchange and Translation into Practice. The conference brought together some 250 leading health researchers, practitioners, policy makers, community health representatives and others with an interest in Aboriginal and Torres Strait Islander health to share ideas and research findings. It also provided a forum for a discussion about the future of Aboriginal and Torres Strait Islander health research, and the funding shortfall confronting the Lowitja Institute.

As a result of this discussion, Congress delegates drew up a short statement outlining the key role the Lowitja Institute and its predecessors had played in the Aboriginal and Torres Strait Islander health sector. This ‘MCG Statement’ calls on the Australian Government and all political parties to commit to the ongoing funding of the Institute, noting that just 1 per cent of the National Health and Medical Research Council’s $800 million recurrent budget ‘would double the current funding to the Lowitja Institute’.

‘The Lowitja Institute since its inception has been able to bridge the gap that previously existed between researchers and Aboriginal communities,’ the MCG statement says. ‘It has been a leader in the incorporation of an evidence-based approach to Aboriginal health both in terms of services and programs and policy, [and] its research agenda has helped shape Aboriginal health policy and practice throughout the nation.’

‘Now more than ever we need to build on this success and strengthen, not weaken, the use of research and incorporation of evidence in to practice in Aboriginal health so that the gains that have been made continue.’

We feel confident that our efforts to secure government funding will be honoured, and we can continue our vital work. Our proud history as an Aboriginal and Torres Strait Islander-led health research organisation is too important to forego, and we trust that with the support of our health sector peers we will be able to continue to making a significant contribution to the health and wellbeing of our people.

To read the MCG Statement in full, to see how others view our role in the health sector and to register your support, please click here.

• Patricia Anderson is Chair of the Lowitja Institute 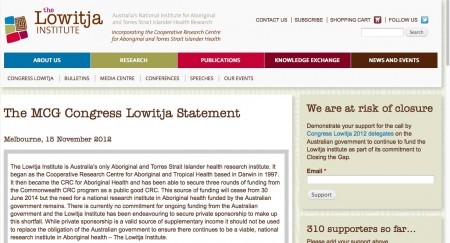