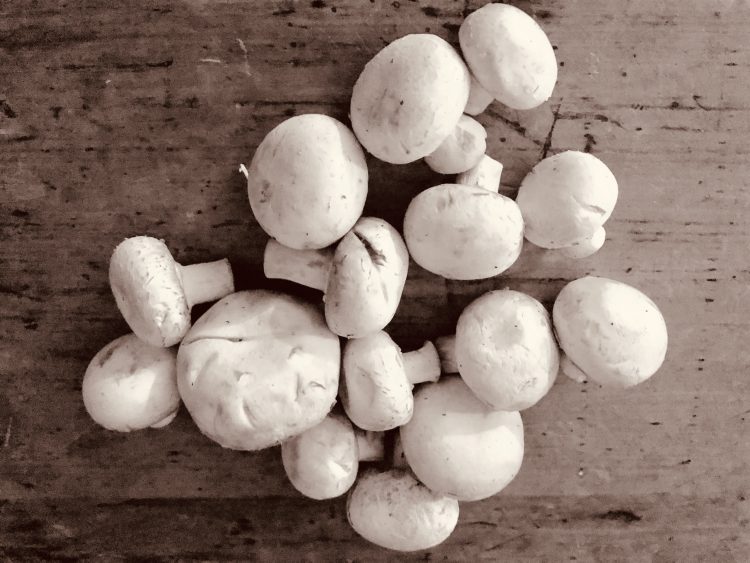 When politicians treat us like mushrooms, what do we need to know?

In the face of health election promises, claims and counterclaims, a survival guide…

Health electioneering is a minefield, with almost limitless possibilities for the public to be misled and bamboozled.

In the #LongRead below, veteran health policy analyst Gordon Gregory gives some tips for making sense of health funding claims and counterclaims, and argues that we need more than a Charter of Budget Honesty to stop the rot.

He says: “Politicians should be required to provide enough detail of their claims about costs and benefits for the facts to be clear to everyone. And the important next step is to have the policy debate about which assumptions or definitions are better for the nation and why.”

In the early days of the federal election campaign, the public suffered a welter of claim and counterclaim from the major parties about dollar figures for intended and unintended cuts, and about the cost and benefit of existing and proposed programs.

Some of the disputes are academic in the sense that they relate to projections for future periods beyond two elections. Others are critical for the next period of government, and evaluation of them should therefore be part of voting decisions made.

One of the main areas of such disputation in the health sector is the funding of public hospitals. A previous piece by Stephen Duckett explains how it is that, given certain assumptions and interpretations of what the word ‘cut’ means, both the Government and the Opposition are ‘right’ about public hospital funding.

Once the ambiguity is explained, the desirable next step is for the public to make a judgement about which position on the matter is better.

What difference to hospital services (waiting lists, quality and safety, patient-centredness etc) do the Labor and LNP funding commitments make (50 and 45 percent of the growth in public health costs respectively)? It is incumbent on both sides to press the claim for the policy that underpins their definition, otherwise it is just another academic dispute.

This dispute about hospital funding is a specific case study of a phenomenon too-much-loved of both sides of politics: using selective language and the complexity of budget processes to keep the public in the dark.

This article examines some of the general budget processes which need illuminating, including those relating to open-ended demand-driven programs that are at the heart of Australia’s health system.

Even more important than the existence and size of ‘budget black holes’ are the policy choices and narratives that lie behind the numbers.

As has been explained elsewhere, conflicting dollar figures about ‘cuts’ can arise simply because of the selection of different things to measure and through the attribution of particular meaning to words like ‘cuts’. The context for different claims is the quite complex system of Federal Budgets, and both sides of politics can benefit from a continuation of the misunderstanding so are not always disposed to clarify matters.

The difficulty for the public in getting to the bottom of dollar figures is not restricted to cuts.

There is also uncertainty about the dollar amounts promised for programs newly announced, especially in an election campaign when promises come thick and fast. It is often impossible to be sure whether new money would be involved or whether there is double counting or reconfiguring or re-branding of existing allocations.

As an example, no-one could object to the notion of extra investment in preventing suicide among young Aboriginal and Torres Strait Islander people. But it is an impossible challenge for all but the public servants and advocates immediately involved to know how much of ‘the $461 million Youth Mental Health and Suicide Prevention package’ would be new and how much would be money shifted around, renamed and re-announced.

Promises concerning new programs like this are, in any case, hypothetical unless and until the promising party is elected to government.

What is meant by ‘Budget cuts’?

There are three main forms of ‘Budget cut’:

This last is important in the health sector. It is properly described as a cut in projected spending growth. 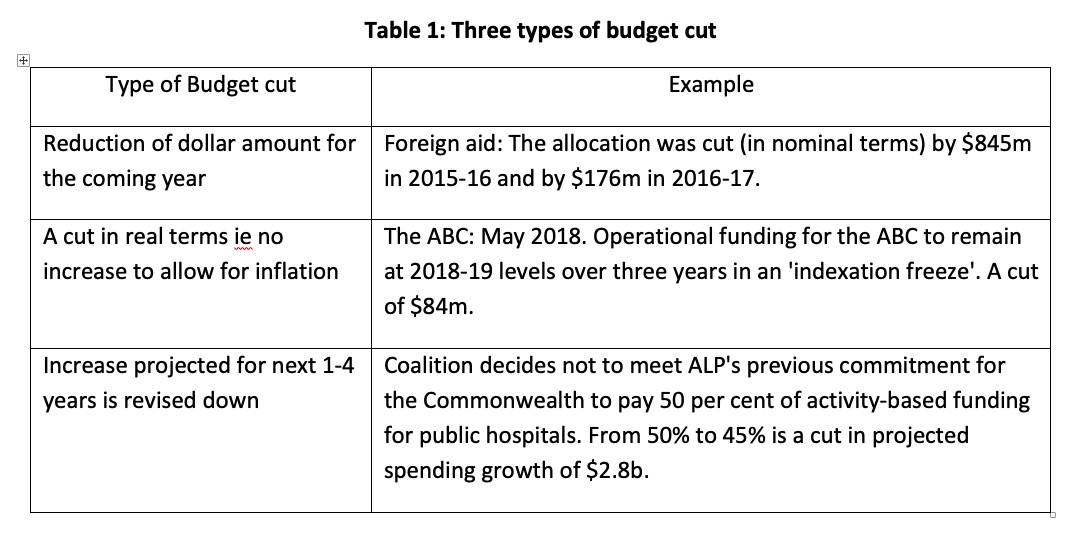 Let us assume that the dollar allocation in the current financial year to a particular purpose is 100 dollar units.

The standard budget structure requires the government to indicate its intentions with respect to the funding of that particular purpose for the next four financial years. If it is anticipated that this ‘particular purpose’ will remain of the same order of priority, the Budget might forecast allocations to it of 103, 106, 109 and 113 units in each of the four coming years (Table 2).

This status quo may be retained, or there may be decisions made which mean that actual allocations in years 1-4 are different from what was proposed at Year 0.

Alternatively, changes to the projected allocations may be driven by external shocks which work in the other direction ­ to increase expenditure.

For instance, it might be a drought support or recovery program. Suppose that in Year 1 there is a shocking and widespread drought. For that year 103 units were originally allocated. The extent of the drought that year demands the allocation of substantial additional money. Cabinet decides to spend 106 in the current year and in that year’s Budget it decides to increase the allocation for Year 2 to 110.

That Budget will also project the allocation for Years 3, 4 and 5. The Government’s approach to drought policy will be tested and illustrated by the forward estimates it makes.

Will it see drought as a natural event for which there should be a range of plans? Will it provide income support and welfare assistance? Will it act to reduce the adjustment pressure on farms affected by the drought? Will it just pray for rain?

These are the critical options that lie behind the budget numbers and which ought to be the subject of serious informed discussion.

The mystery of Budget forecasts 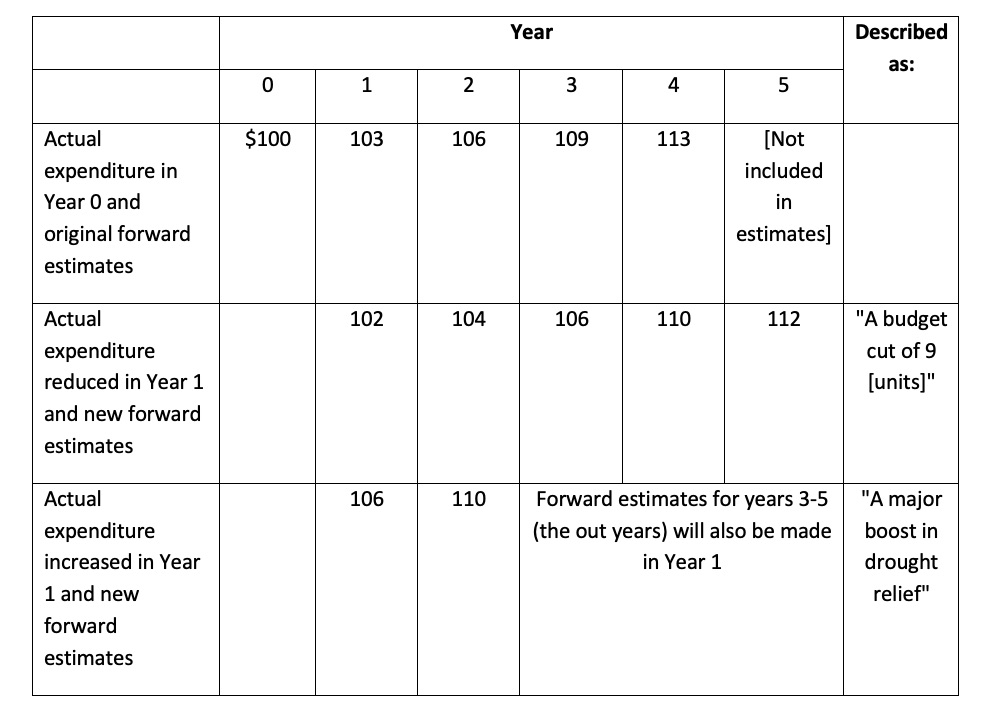 It seems to be accepted that the allocation of public money to drought programs should be decided from time to time as drought occurs, with the consideration being made each time without any agreed overarching policy framework.

The advantages of this approach include ‘flexibility’ – a term which accommodates political opportunity. Its disadvantages include the lack of predictability and certainty which could underpin longer-term national, state, regional and property-level planning for drought.

The flexibility and uncertainty inherent in a program area like drought do not exist in many other areas of major expenditure, including some in the health sector. This is because expenditure in those programs is open-ended and ‘demand-driven’.

Two of the largest programs funded by the Commonwealth in the health sector are of this type. They are the Medicare Benefits Schedule (MBS) and the Pharmaceutical Benefits Scheme (PBS). Decisions about the amount spent through these are less easily managed or altered by the government of the day.

Between them the MBS and PBS cost the Federal Government (2016-17) $45 billion, or 61 percent of its total spend on health. Both are open-ended (ie unlimited) demand-driven programs. Each has a set of regulations through which eligibility for a payment is established as well as the amounts paid in all circumstances that might exist.

Demand-driven programs have momentum (mass x velocity), like a tanker at sea; the Government can alter the course (cost) of these programs slightly through changes to the criteria that apply. But large changes in direction are in effect ruled out because of the foundational principles represented in the programs, and thus by political risks.

Suppose that through the Commonwealth’s due process, a new pharmaceutical is added to the PBS. The Commonwealth becomes liable for providing that pharmaceutical to as many consumers as are prescribed it – perhaps only in certain specified circumstances (for example for one particular clinical condition but not others).

The same general process determines expenditure under the MBS. New activities (‘items’) are added to the Schedule and become eligible for payment and, very occasionally, existing items become ineligible.

(There have been great expectations of the current MBS Review in this latter regard. There are over 5,700 MBS items and the Review Taskforce is charged, among other things, with the identification of items that are obsolete, outdated or potentially unsafe. It has established over 70 Clinical Committees to provide it with expert advice.)

One of the more infamous attempts to re-chart SS Medicare’s course was when Nicola Roxon, armed with information about how the procedure had been transformed (simplified) by technology, tried to halve the schedule fee for cataract surgery.

Eventually the Minister failed in her clear-sighted intention; but the compromise deal agreed in the Senate did include $5 million in a separate fund to offset costs of cataract services for Indigenous and rural patients.

The freeze on rebates for GP services under the MBS, introduced by the Labor Government in 2013 and retained under Abbott, Turnbull and Morrison, was a temporary re-design of the system that has saved the Commonwealth perhaps $2 billion – and increased out-of-pocket costs to patients. The freeze is being removed in stages.

Another demand-driven program currently in the public eye is the National Disability Insurance Scheme (NDIS).

The forward estimates of what it would cost the Commonwealth have not been met due to some mixture of bureaucratic stasis or incompetence, poor management, lack of consultation, over-ambitious expectations and/or secret bloody-mindedness.

The misery caused by the NDIS’s failure to take shape as quickly as anticipated has been given greater public attention than might have been the case because of the underspend’s contribution to a forecast Budget surplus next year (2020-21).

Conflicting claims in election campaigns about one party’s intentions to cut programs or about the cost of promised new initiatives continue to irritate the public. Judgments about ‘budget black holes’ have won and lost elections a number of times.

Progress has been made with the Charter of Budget Honesty, enabling the Departments of Treasury and Finance to cost election commitments during the caretaker period. However, if the costings relate to policy proposals that are mired in uncertainty due to a lack of detail or selective interpretation, the public is still not properly informed.

Politicians should be required to provide enough detail of their claims about costs and benefits for the facts to be clear to everyone. And the important next step is to have the policy debate about which assumptions or definitions are better for the nation and why.

A Charter of Budget Honesty is one thing; the policy choices and narrative behind the numbers are even more important.

PrevPreviousNew review calls for transformation in health; it’s about Western Australia but of wider relevance
NextWhat might Greta Thunberg tell the Australian Parliament?Next