Detail from cover of WHO publication, Best Buys in reducing econoomic impact of NCDs

In the wake of UN meeting, what will it take to step up global action on chronic diseases?

Introduction by Croakey: The much-anticipated United Nations High-Level Meeting on non-communicable diseases (NCDs) has disappointed many health leaders, with concerns raised about a lack of high-level political engagement, as well as a lack of teeth and ambition in the meeting’s declaration.

As previously reported at Croakey, the declaration, adopted in New York on 27 September, has also come under fire for its lack of representation of Indigenous peoples and their needs.

As well as a predictable focus on tobacco, alcohol, mental health and physical activity, the declaration (see p 6) calls for action on environmental determinants of NCDs, including pollution, exposure to chemicals, climate change and extreme weather events, as well as urban planning and sustainable transportation.

Writing in The New York Times, Janvier Kabogo, CEO of Unitia Pharmaceuticals, agreed with civil society and other health advocates who had called the meeting a “ “squandered opportunity” to beat these preventable diseases. He wrote:

It also shows that political leaders still think that health is about expenses, while spending and investing for healthier lives of people actually generates high economic returns on investment.

It is high time for us (public health advocates) to communicate public health issues in an economic and political language that will easily be understood by policy makers and Heads of State. It is definitely a skill that we need to learn.”

The European Chronic Disease Alliance and the European Public Health Alliance issued a joint statement expressing disappointment that less than half of EU Member States were represented at the meeting. The statement says:

… despite some positive elements, the political declaration lacks ambition – and inexplicably fails to make reference to the WHO Best Buys and other recommended interventions which provide evidence on cost-effective actions to tackle the diseases.

We deplore the absence of any reference to taxes and other fiscal measures, which are evidence-based, effective means to address behavioural risk factors as well as the commercial and market determinants of health – which are recognised in the declaration. The declaration does not contain time-bound commitments from countries to deliver measurable advances, including national NCD plans, and to monitor results.”

Michael Bloomberg, reappointed by WHO for a second term as its Global Ambassador for NCDs and injuries, has described a lack of political action and investment in addressing NCDs, and questioned the seven-year wait until the next high-level meeting on NCDs in 2025.

In the article below, Australian experts identify five key themes from the UN meeting that are critical going forward, and argue that the more countries invest in chronic disease prevention, the more their economies benefit.

An issue of such importance should involve world leaders. Although 23 countries sent heads of state, the vast majority didn’t. The big bosses were of course at the General Assembly, and usually show up for major international events focused on trade or defence (the G8, APAC etc.).

But the leading preventable causes of death worldwide haven’t quite made it to the top of the geopolitical priority list. 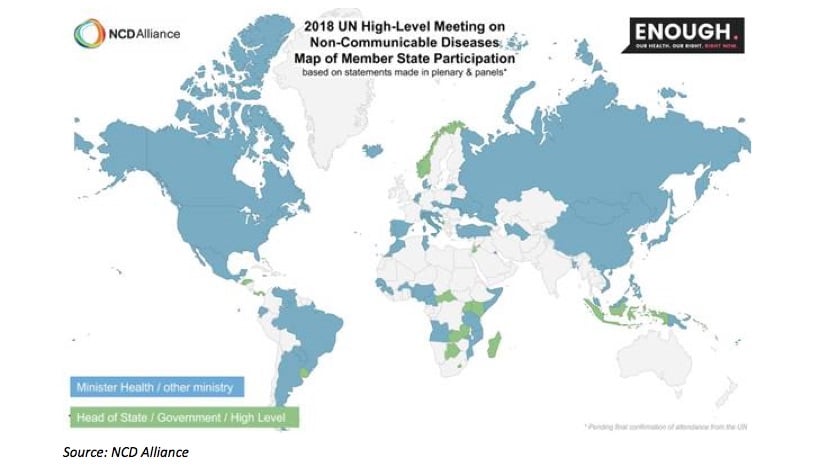 Nonetheless, the meeting was an important step forward. How big a step may depend on what happens next in relation to five key themes that emerged.

1. The human impact of chronic disease

In his opening statement, Dr Tedros Ghebreyesus, Director-General of the World Health Organization (WHO), read out a list of common chronic diseases and asked delegates to stand when they heard a disease that had killed someone they cared about. It didn’t take long before everyone was on their feet.

Of 41 million chronic disease deaths each year, a vast number are from cardiovascular disease, cancer, diabetes and dementia, while kidney disease shoots up the list in step with diabetes, weight gain and hypertension.

Preventing these diseases saves money. But it’s the human cost that is highlighted when we reflect on loved ones lost, often prematurely and unnecessarily.

Across the spectrum, almost 10 million premature deaths could be prevented by applying knowledge we already have. Avoiding smoking, improving diet and physical activity, alcohol control, management of non-fatal precursor conditions – basic interventions can change the statistics.

One in two Australians have a chronic disease, and one in four have at least two conditions. Real numbers, real people; real opportunities for action.

2. Inequities between and within countries

Australia is a global leader in some areas of NCD prevention, such as tobacco control and cervical cancer, which were both highlighted at side events during the UN General Assembly. Australia has an opportunity to all but eliminate cervical cancer within 20 years through screening and HPV immunisation.

At the same time, more than 300,000 people die from HPV-associated cancers each year (predominantly cervical cancer), particularly in lower-income countries. Opportunities to share Australia’s success in screening and immunisation should be pursued.

It’s a pattern reflected in other developed nations. Yet there was no recognition of Indigenous peoples in the political declaration at the meeting. As highlighted in the Indigenous NCDs series, targets must be set and interventions to improve Indigenous health need Indigenous people at the wheel – driving the initiation, design and implementation of solutions.

3. Political will versus industry influence

The political declaration on NCDs was officially endorsed at the meeting, following months of negotiations. While it has its strengths, it has also been criticised for being weak and lacking accountability.

Over 300 civil society groups, including the Australian Chronic Disease Prevention Alliance, signed a global NCD Alliance statement calling on world leaders to go above and beyond the “vague and unambitious commitments” in the political declaration.

A major criticism was the omission of the WHO ‘Best Buys’ – 16 cost-effective interventions to address chronic disease risk factors: tobacco, alcohol, poor nutrition and physical inactivity.

The Best Buys can only work if they reduce consumption of harmful commercial products. This is always met with resistance from the companies that sell those products – and is always a test of government resolve.

While the exclusion of the Best Buys from the declaration is a guide to that resolve, at least the President of the UN General Assembly, María Fernanda Espinosa Garcés, urged governments to adopt them in her closing remarks.

Less than one percent of global health funding is dedicated to chronic disease prevention, despite NCDs causing more than two-thirds of deaths as well as unsustainable healthcare costs. Yet there are blue chip prevention investment opportunities.

According to WHO, around 80 percent of all heart disease, stroke, and type 2 diabetes could be prevented, along with 40 percent of cancers.

The Best Buys are so named because they’re excellent value. Controls on advertising of harmful products are cost-neutral; recommended tax measures, such as tobacco and alcohol excise and a sugar-sweetened beverages levy, deliver net revenue for governments.

The WHO report Saving lives, spending less modelled a $7 return by 2030 for every $1 spent on NCD interventions. In lower-income countries, only US$1.27 per person per year is needed to implement the Best Buys.

The more countries invest, the more their economies benefit.

If the world is serious about chronic disease prevention, we need more than an occasional meeting.

The next High-level Meeting is set for 2025. What happens in the meantime, to hold nations to account?

Countries have agreed to 25 targets to reduce NCD risk factors and mortality by 2025 and the Sustainable Development target 3.4 to cut premature mortality by one-third by 2030.

The NCD Countdown 2030 was released just prior to the meeting to highlight progress. Yet more than half the world’s countries are not on track to meet the targets. 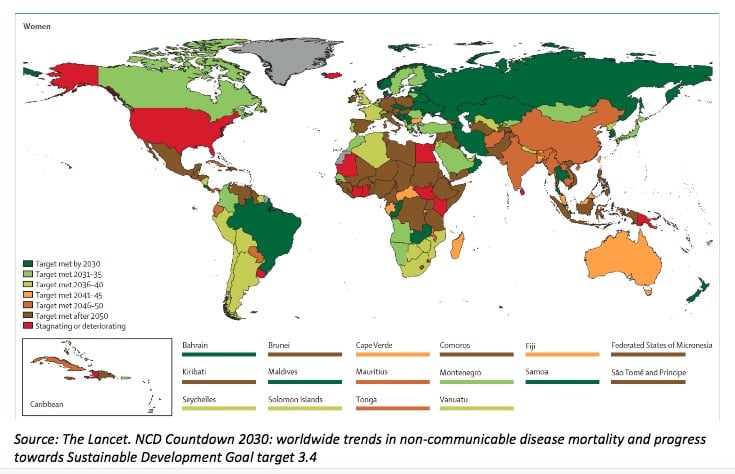 In the interim, world leaders will gather again in 2019 for a UN High-level Meeting on Universal Health Coverage. Names like Trump, Putin and Xi are unlikely to be on the guest list. But hopefully there will be enough genuine leadership to move closer to the targets. It will be up to governments to deliver – and up to civil society to hold governments to account.

In the words of Her Excellency María Fernanda Espinosa Garcés: “Pledges, promises, and a Political Declaration are welcome and important. But even more important is when they are implemented fully, and the impact is felt in the lives of individuals and households as well as in the economy.”

• The Australian Chronic Disease Prevention Alliance (ACDPA) is an alliance of Cancer Council Australia; Diabetes Australia; National Heart Foundation of Australia; Kidney Health Australia; and Stroke Foundation. Members work together in the primary prevention of chronic disease, with emphasis on changes to the food and physical environments.

PrevPreviousWhat do we know about the activities and outcomes of Primary Health Networks?
NextNational summit calls for urgent action on mental health care in emergency departmentsNext