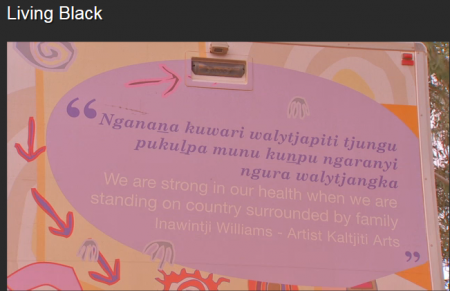 Access to healthy and affordable food and good health care is a big issue for Aboriginal and Torres Strait Islander people, particularly those living in remote communities.

The recent National Rural Health Conference in Darwin has called for a Senate Inquiry into food security for remote communities, while the Ngaanyatjarra, Pitjantjatjara and Yankunytjatjar (NPY) Women’s Council has long campaigned for more dialysis services in remote communities, arguing that having to go such large distances for treatment was “doubly cruel” and “likely to make end stage kidney failure even more distressing and upsetting”.

So don’t miss this beautifully shot and told story by SBS/NITV journalist Hannah Hollis that explores the “high price to pay for staying well” for Aboriginal and Torres Strait Islander people living in remote communities in this week’s Living Black report (see it On Demand or watch tonight at 9pm on NITV  (Ch 34/Ch 144).

Hannah, a proud descendent of the Jawoyn people from the Northern Territory, talks about the story below.

We all hear about the chronic health issues plaguing Aboriginal Australia. The statistics are staggering: Aboriginal people have a life expectancy 10-17 years lower than the rest of the country and are 20 times more likely to suffer from chronic kidney disease, a condition that is almost entirely preventable.

Travelling as a video journalist to some of Australia’s most remote communities, I’ve witnessed what life (the good and the bad) is like for our First Peoples. My most recent assignment took me to the middle of desert. I flew into Alice Springs and drove three hours south on the softest red sand you’ve seen. Across the border into South Australia and, just as the sun was setting, I arrived at Pukatja (Ernabella), one of the eight communities that make up the Anangu Pitjantjatjara Yankunytjatjara (APY) Lands.

I was here to meet up with a woman called Inawintji Williamson. She grew up on the APY Lands and became a highly respected member of the community, a translator and an incredible artist.

Her life changed more than 20 years ago when she was diagnosed with type 2 diabetes. It was too late for insulin tablets to take effect and, despite Ina’s best efforts, her condition deteriorated to renal disease. She needed dialysis.

She made the incredibly hard decision to leave her homelands, family and friends and move to a city in order to survive.

Now, living alone in Adelaide, she has dialysis three times a week, for five hours a day.  Her homelands are a 15-hour commute away so trips to see her family are rare and if she tried to go without support, it would be life-threatening.

Inawinytji’s story is not uncommon.

This year, Ina has secured a seat on the South Australian Country Health Dialysis truck. It’s a mobile unit, with three chairs, that travels around the APY Lands providing treatment to patients like Ina who are desperate to return home.

But the issue for remote communities is not just about treatment, but prevention.

Ina was part of a group that helped set up Mai Wiru (Healthy food), to ensure healthy food is both affordable and clearly identifiable for people who may not speak or read in English. The group now runs the shop in Pukatja – the first aisle is dedicated to diabetes appropriate food options. Healthy food is subsidised to make it cheaper, junk food attracts an excise.

To cater for all languages and literacy, and to promote good choices, there are signs inside the shop above foods that tell the consumers if it’s healthy or not (thumbs up/thumbs down).

They are making great inroads, but there is a long way to go and much pain for those who must leave home, family and country to look after their health.

Born in Darwin, Hannah grew up in Canberra and also spent time in Papua New Guinea before moving to Melbourne. After studying at RMIT in Melbourne, Hannah moved to Sydney and joined SBS as the Indigenous cadet in 2012. She successfully completed that year and is now a member of the Indigenous News and Current Affairs newsroom working on Living Black and NITV news.  She has also worked on SBS World News and NITV News as a reporter.

Hannah is excited to tell the untold stories of people and places around the country, giving a voice to those who don’t have one.

PrevPreviousThe power of data on the nitty-gritty of public health practice
Next#JustJustice: Campaign to save the NSW Custody Notification Service: ‘lifeline’ for Indigenous people in custodyNext