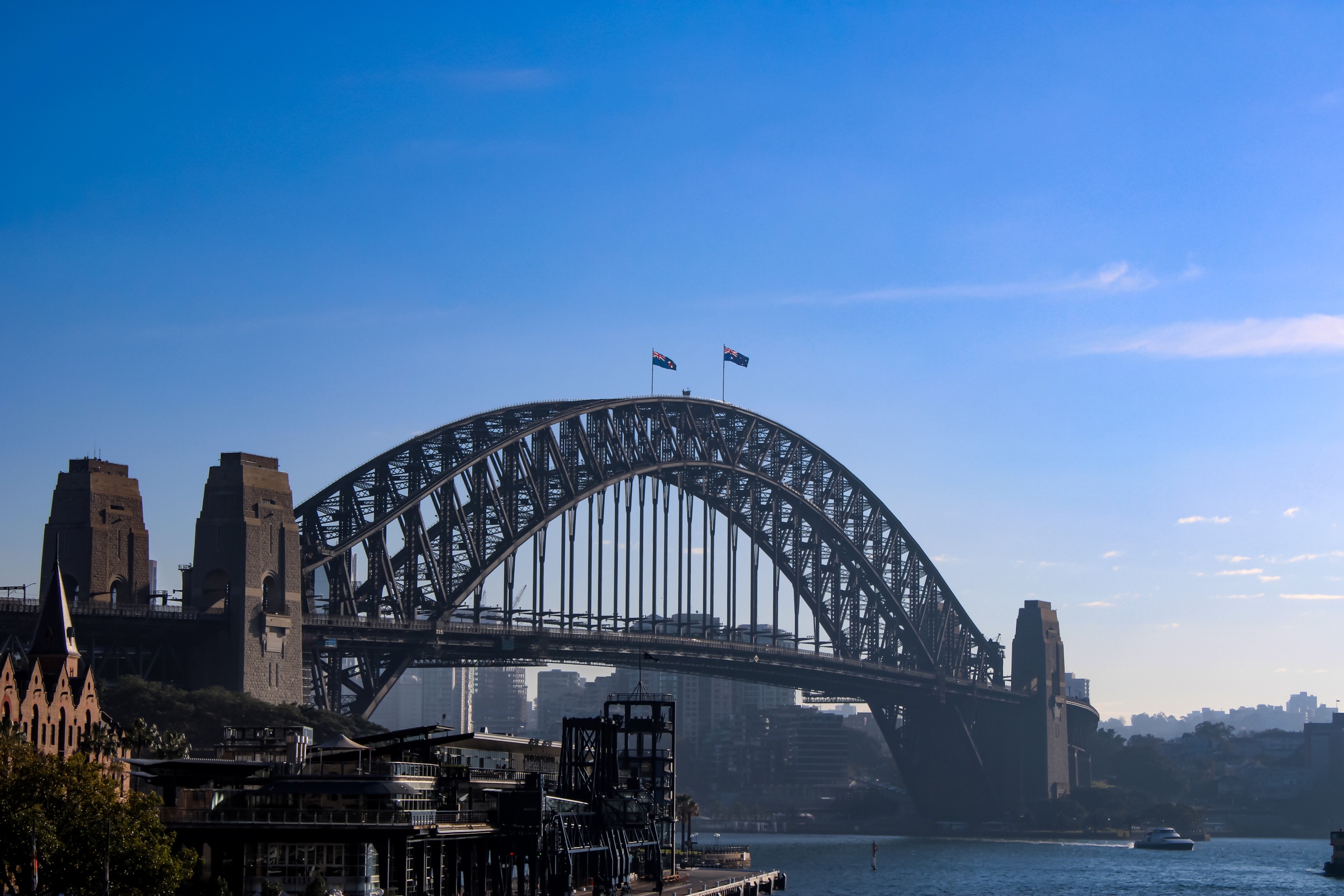 Introduction by Croakey: During the final week of the election campaign, The Royal Australian and New Zealand College of Psychiatrists will hold a congress to discuss climate change, the broader determinants of mental health and updates in the diagnosis and management of mental health.

The mental health and wellbeing of Aboriginal and Torres Strait Islander people is also on the program, with sessions about improving cultural safety and the importance of valuing Indigenous knowledge in psychiatry practice.

‘Stronger Bridges, Safer Harbours’ will be held both online and in-person at the International Convention Centre in Sydney 15 – 19 May.

Dr Amy Coopes, who is covering the hybrid event for the Croakey Conference News Service, previews the #RANZCP2022 discussions below.

Connection, inclusion and the broader determinants of mental health will be in focus at this week’s annual trans-Tasman gathering of psychiatrists in Sydney on the eve of the Federal Election.

The impacts of COVID, climate change, and healthcare worker wellbeing feature prominently on a program of unprecedented scale. Organisers have billed it the largest-ever Congress held by the Royal Australian and New Zealand College of Psychiatrists, with dozens of streams over the four days.

The pandemic and its impacts will be the subject of several sessions and symposia, with the related issue of health care worker burnout also in focus.

As part of the pandemic response, “already incredibly inadequate” mental health services were some of the first to be mothballed and staff redeployed to COVID efforts, said Congress convenor Dr Ralf Ilchef, a consultant liaison psychiatrist at Sydney’s Royal North Shore Hospital.

The impacts of these decisions continue to be felt.

“There’s this shadow pandemic of mental distress that’s actually going to dwarf the impacts of COVID, there’s been a terrifying increase, for example, in the number of emergency presentations by adolescents and young people in the past two years,” Ilchef said.

“We’re going to have to see whether that’s going to be a long-term phenomenon or whether that will settle as the pandemic settles, but I think we’ve got a lot to learn about how to manage this.”

The RANZCP Congress, which starts in Sydney on Monday as a hybrid in-person and virtual event, brings together psychiatrists from across Australia and New Zealand to discuss the latest in mental health diagnosis, management and policy.

This is the first time the specialty has come together in full since the height of the COVID-19 outbreak to discuss several years of research and advances in the field.

Falling in the days before the Federal election, the program also has a focus on the climate emergency and Aboriginal and Torres Strait Islander peoples’ mental health, with keynotes by Tim Flannery and Stan Grant, and connected sessions.

“Ensuring that we make the connection between these social issues and how they impact on people’s health and mental wellbeing and mental illness is so important,” Lakra said. “That connection is becoming more and more apparent as time is progressing.”

Lakra said the College was seeking bipartisan support for ongoing investment into mental health services and clarity around cost-shifting, with the sector mired in complexities straddling state and federal jurisdictions.

He called for a national data collection centre and establishment of registries to log and analyse mental health indicators in a coherent way which drove timely policy decision-making, similar to the Scandinavian model.

Lakra also advocated for bulk billing incentives that addressed affordability of and access to mental health services in rural and other areas of need, including the so-called ‘missing middle’ who were too unwell for private care but not unwell enough for public intervention.

Harmonisation of mental health legislation was also nominated as a priority for the incoming federal government, with inconsistent and fragmented state-based laws meaning patients were treated differently in different jurisdictions. Lakra said his preference would be “one legislation across the country”.

“We are watching with great interest what the outcome of the election is and will continue with our advocacy in this space,” Lakra said.

The Congress is themed Stronger Bridges, Safer Harbours, and was organised around the concepts of connection, inclusion and creativity, with content spanning the tenets of the biopsychosocial model of mental health.

Ilchef said it aimed to capture and cater to the diverse aspects of and interest areas within psychiatry, from the neurobiology of mental illness and its medical management through to talk-based psychotherapy models of care and advocacy for marginalised and vulnerable groups.

The bridge motif symbolised both neural and social connections, the latter which Ilchef said had been “imperilled by digital changes and by COVID, impacting us as individuals and communities”.

Inclusion was also central to session planning, with many marginalised groups also excluded from access to good mental health care, whether refugee, First Nations or LGBTQIA+ populations, or people with a disability.

Though not a marginalised group in the traditional sense, Ilchef said men often also struggled to access appropriate care and “tend to get treated through the forensic system.”

“Inclusion, how to find ways of delivering treatment respectfully and effectively to those groups is an ongoing challenge.”

Sessions will zero in on a broad host of topics, ranging from autoimmune triggers of mental illness, the emerging role of psychedelics and ketamine in mood disorders, attachment and trauma, racism and colonialism, cultural safety, and the 20-30 year mortality gap in mental health.

Echoing Lakra’s thoughts on the need for structural reform, Ilchef said mental health’s model of service was not fit for purpose.

The program also offers some introspection for the College, with sessions focused on trainee experiences of the pandemic and repeated disruptions to exams.

Ilchef said the disruptions caused incredible distress to a cohort of several hundred psychiatrists in training and resulted in “generational argy-bargy” over representation and consideration of trainee perspectives.

“It was very distressing and did the College, both internally and externally, a lot of reputational damage,” he said.

Lakra acknowledged it was “distressing and difficult for many of our trainees and we were really sorry” and there was an internal review underway to determine what could be learned from the events.

The College is poised to unveil a trainee position on its board during Congress and Lakra said a number of other reforms were underway to shift away from exam-driven certification to workplace-based assessment.

Noting this had been a widespread issue for all medical colleges during the pandemic, not just RANZCP, Lakra said the “most important thing is how we get together and solve those problems.”

There will also be discussions around the College’s name, with a growing movement supporting a rebrand to remove ‘Royal’ from its title, due to its colonialist connotations and outdated links to the British monarchy. The College adopted this name in 1977, 14 years after forming as the Australian and New Zealand College of Psychiatrists.

“My personal view is that it’s time to move on,” said Lakra, adding that, as someone of Indian origin he was “well aware of the history”. 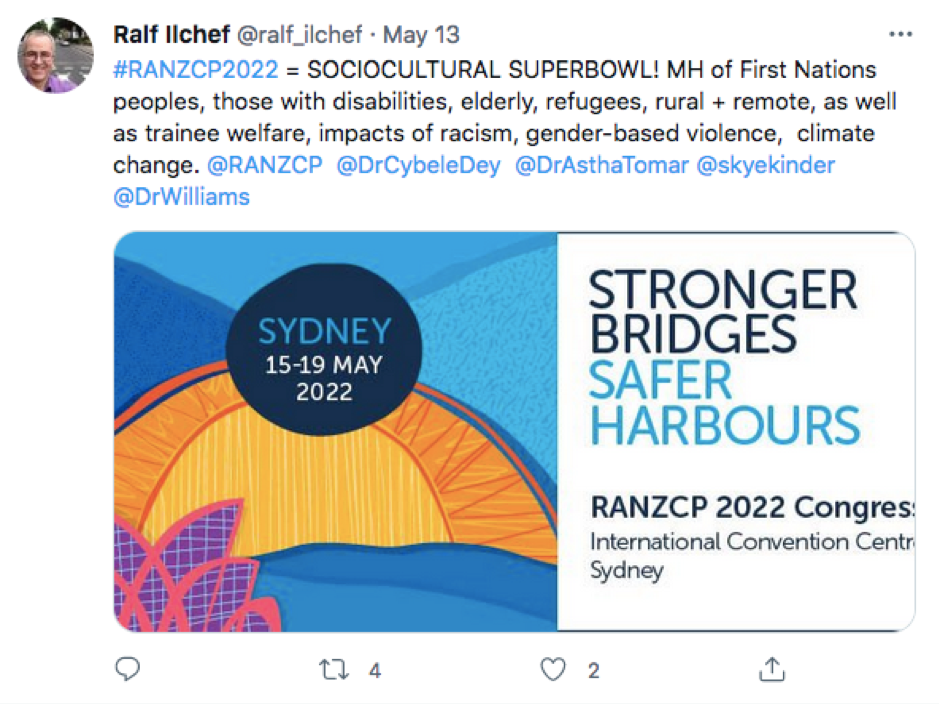 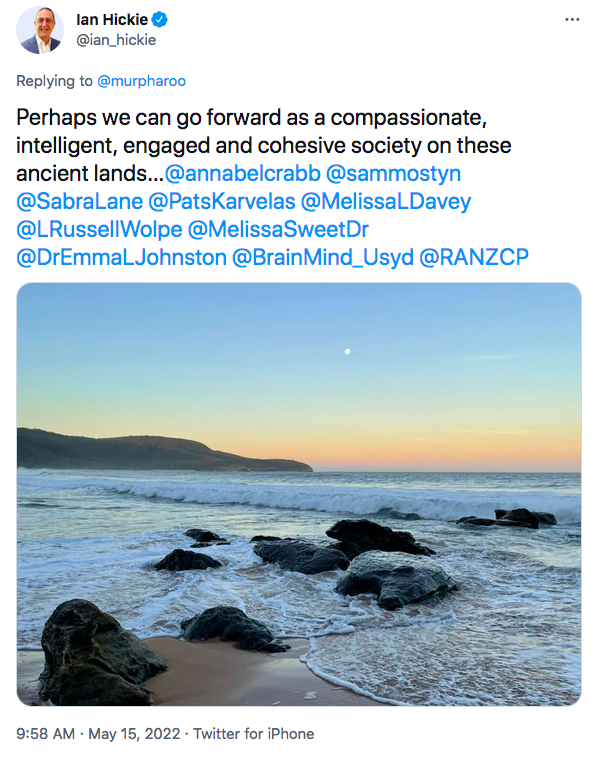 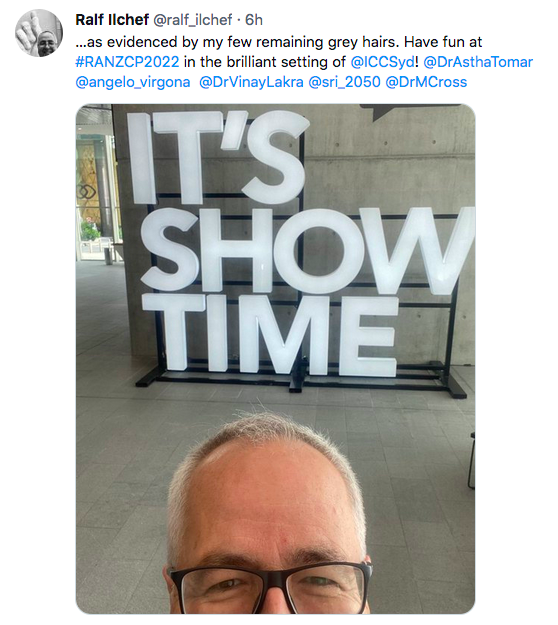 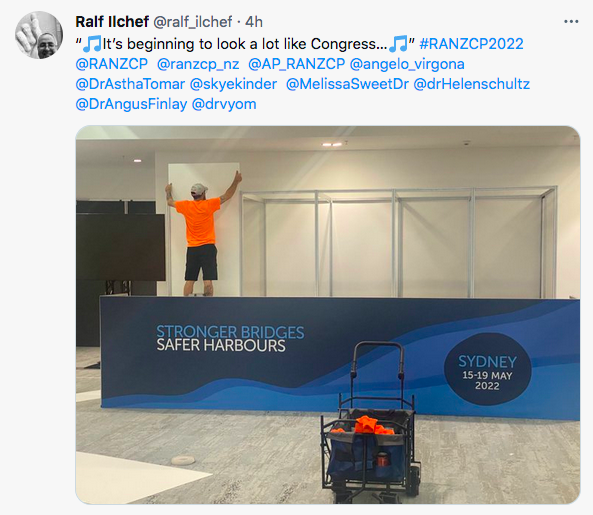 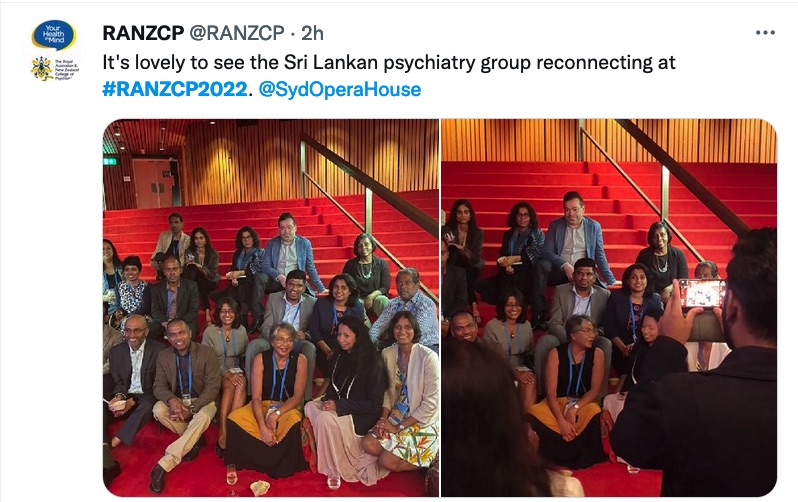 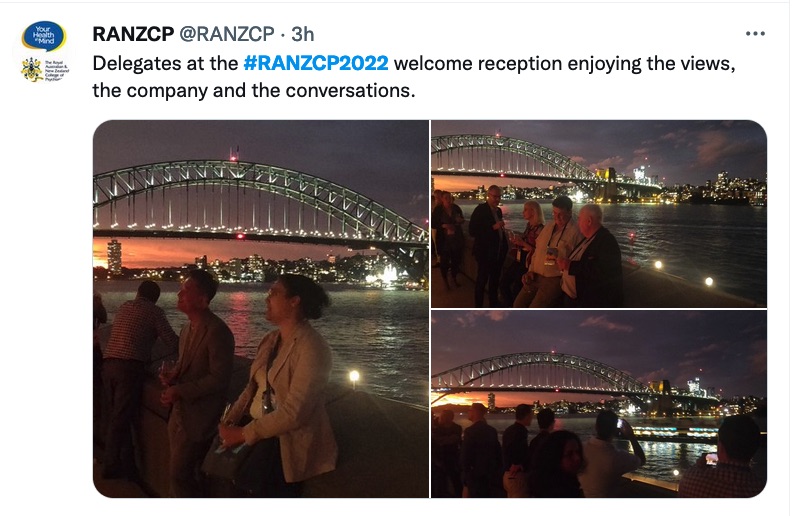 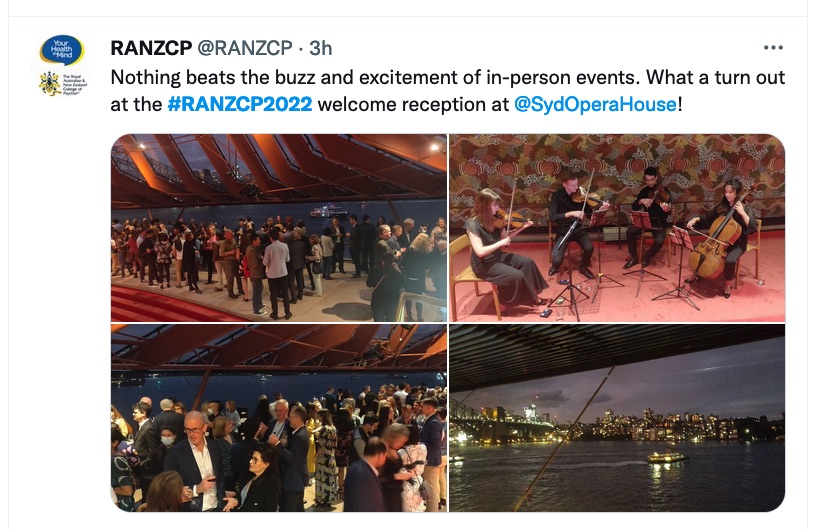 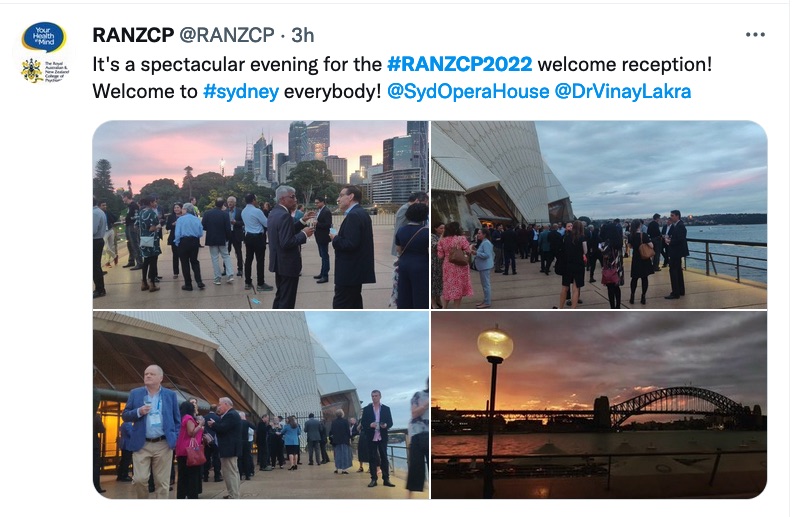 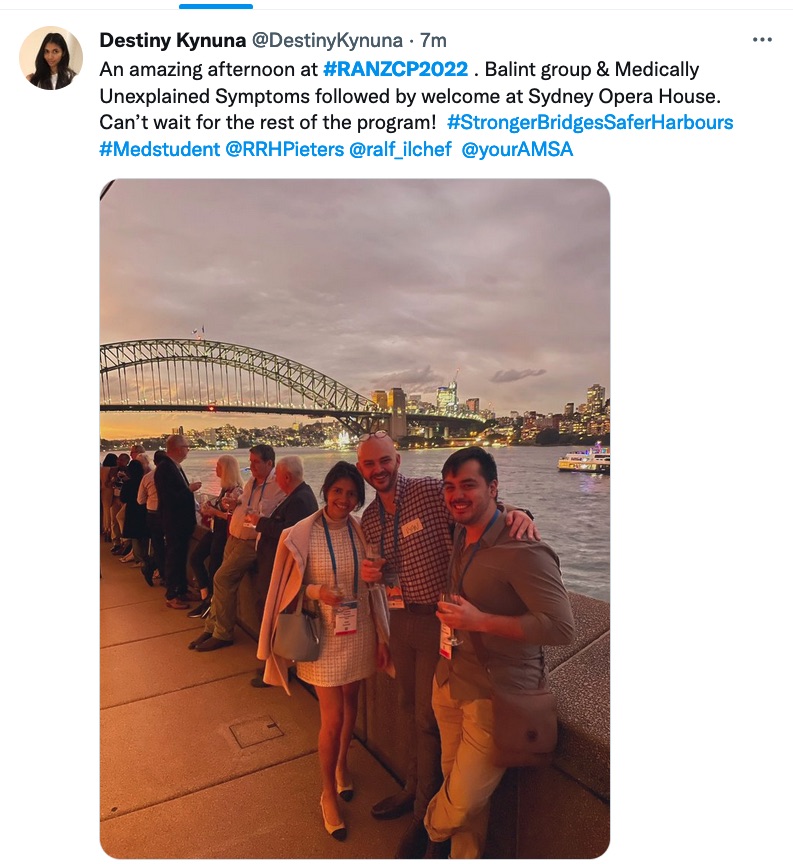 Dr Amy Coopes will be in virtual attendance for the Croakey Conference News Service. Follow her at @coopesdetat, with additional coverage via @croakeynews and @wepublichealth.

The RANZCP Congress runs May 15-19 at the Sydney International Convention Centre.

Click through for the full in-person and virtual programs.

Bookmark this link to see all our conference coverage, and join the conversation at #RANZCP2022.

PrevPreviousIf exercise is such a powerful medicine, then what does this mean for health reform?
Next“Of unsound mind”: the archaic and offensive law blocking equality at the ballot boxNext