It was also an important part of the recent Australian Indigenous Doctors’ Association (AIDA) conference in Melbourne, from the leading role of the Ngangkari traditional healers as keynote speakers through to a poignant performance by legendary musician Archie Roach.

As the conference program noted, 58-year-old Roach has been through tough times in recent years, including a stroke, lung cancer, and the tragic loss of his partner in life and music, Ruby Hunter, aged just 54.

To his audience of Indigenous doctors and medical students, he played powerful songs like Took the Children Away, about the stolen generations, with an oxygen tank behind him on the stage.

Assistant Health Minister Fiona Nash told the conference by video link that the National Aboriginal and Torres Strait Islander Health Plan is to be re-released after having been “reworked” by the Federal Government since its election last year.

She said it was being changed to “ensure it reflects the links between health and the social determinants of education, employment and community safety.” Her office has told Croakey that it would be released “shortly”, although there’s no date to announce yet.

AIDA’s vision is for Aboriginal and Torres Strait Islander people to have equitable health and life outcomes, by:

It declares in its Cultural Safety Position Paper that Aboriginal and Torres Strait Islander culture is a source of strength, resilience, happiness, identity and confidence.

“Each of these factors are inextricably linked to health and wellbeing, making the protection and promotion of culture critical to progressing improvements in Aboriginal and Torres Strait Islander health.”

Below are some of the cultural highlights of the conference, and other important links between culture and health from the presentations. See also the AIDA site for more photos. 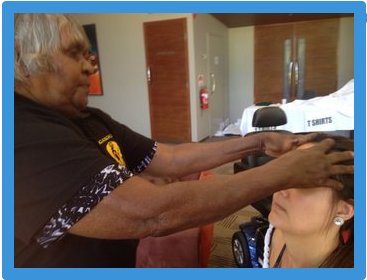 The Ngangkari were clear: the need for more dialysis machines in remote communities is not just critical to the health of growing numbers of Indigenous people with renal disease, but to the communities being fractured by the incapacity to treat them locally.

“Everyone is getting split up,” said Maringka Burton, speaking in her native Pitjantjatjara language through an interpreter Linda Rive. “We have no say in where we get sent when we need dialysis.“

The Ngangkari told the conference their role as traditional healers for 28 communities in the remote Ngaanyatjarra, Pitjantjatjara and Yankunytjatjar (NPY) lands was strong.

Their ranks are growing and they work closely with Western health services, both locally and in Alice Springs, Adelaide and Port Augusta.

But Burton said they were seriously worried about the impact on individual patients, their families and the broader community of being sent to those far off centres for dialysis, for months at a time.

Even if family members could get away from other responsibilities to be with them, they often cannot afford to cover the travel and accommodation costs, she said.

“We as Ngangkari are doing okay, but it’s our family on dialysis – they go to these distant places and it’s like we lose sight of them and they feel very lost,” Burton said.

“We don’t know when or if the government will ever do anything for us to keep our families together, for our families to not have to go thousands of kilometres away to get those services that people in cities get around the corner. Families are fragmented.”

The NPY Women’s Council, which employs the Ngangkari (the only such program in Australia), has long campaigned for more dialysis services in remote communities, arguing that having to go such large distances for treatment was “doubly cruel” and “likely to make end stage kidney failure even more distressing and upsetting”.

Currently there are two mobile dialysis units operating out of Alice Springs, and there are efforts to get a third, but Burton says one is urgently needed in Ernabella. 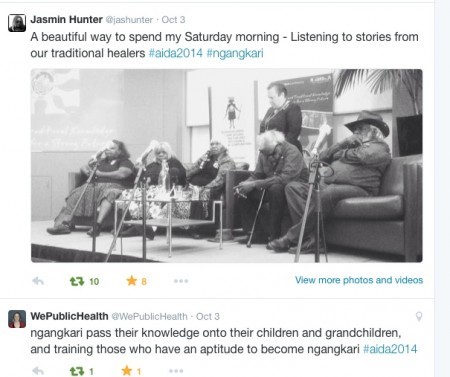 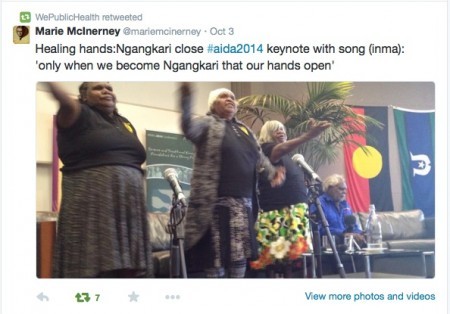 “TJ is a mad bastard, and his estranged 13-year-old son Bullet is on the fast track to becoming one, too.”

This is the opening blurb for Mad Bastards, a movie “about hard men battling to do the right thing by their family” that is set in the Kimberley region, features the music of the Pigram Brothers, and was a hit at the 2011 Sundance Festival.

The film is also part of a men’s health program developed by the Gold Coast based Mibbinbah Ltd, Australia’s only national Indigenous male health promotion charity.

Mibbinbah began as a unique action research project, building on the work of Aboriginal and Torres Strait Islander health leaders Dr Mick Adams and Associate Professor Mark Wenitong and their work to improve men’s health and wellbeing through strengthening connection to culture, identity and family.

Wenitong told the conference the film’s producers were really open to having it used to address health issues.

“They said they would love it to be converted into a resource, they really wanted it to be a movie that changed stuff,” he said.

Mibbinbah CEO Jack Bulman said the Be The Best You Can Be: The Mad Bastards Guide program uses the film as an “ice breaker” to spark group discussion around six core themes:

It’s been run from Cherbourg in Queensland across to the Wandoo Reintegration Facility in Western Australia, with enquiries currently from more than 70 communities across Australia.

“Originally we thought it was just for Aboriginal men’s groups, but then we’ve had so much interest from different communities, not just the fellas, that we’ve started to work with women as well,” Bulman said.

The new format involves two days with men from the local community and two days with the women – creating “safe, no shame” spaces, and then a combined day “when men and women come together to talk about issues and concerns in the community.”

A big part of the program is the follow-up support “because it does open up a lot of wounds, and we didn’t want to leave people high and dry.”

Wenitong also told the conference about other research looking for strategies and practical approaches to encourage Aboriginal and Torres Strait Islander men to look for help and access health services. 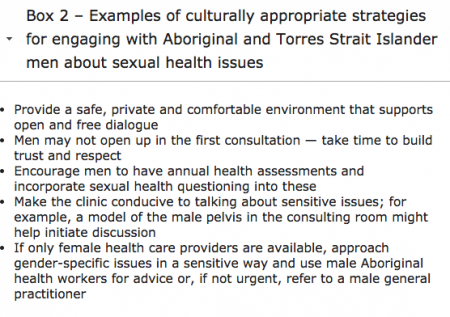 The take-home message, he said, was to build relationships, longer consultations, and engage in their health, social and emotional wellbeing, though he said the context can be “so daunting sometimes”.

Wenitong recounted the story of a young male patient in his 20s who had experienced in a very short period the death of his mother, suicide of a close relative, and attempted suicide by another family member. He had sought treatment because he had been injured while helping to prevent that suicide.

Such traumas were not uncommon in Aboriginal and Torres Strait Islander experiences, and Wenitong said the risk was that they become “normalised”.

“Because it ain’t normal,” he said.

The good thing about the Mad Bastards film, he said, was its positive messages: “A lot of Indigenous films can leave you depressed, this one had a message of hope, a message of culture, it stayed really real.”

Associate Professor Kelvin Kong’s passion for the ear was abundantly clear at the conference.

“I love the ear,” he declared – as Marvin Gaye crooned Sexual Healing in the background to illustrate the power of music – and how it can be too easy for health professionals to think too narrowly about parts of the body that play such an emotional and creative part of our lives.

And it’s this passion that’s led Kong to playing a starring role in these fantastic film clips, aimed particularly at Indigenous children and families but also providing straight and easy information for the broader community to allay fears about the detection, treatment and ramifications of ear disease.

L’il Mike is the brainchild of Kong – an ear, nose and throat specialist, and Australia’s first Indigenous surgeon – and the Awabakal Newcastle Aboriginal Cooperative. It was co-produced by Oscar nominee Steve Palvolsky and animated by Phil Jennings, who has worked on the film Happy Feet. 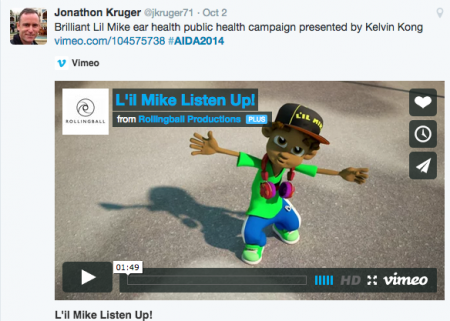 Available at the Awabakal website, it uses culturally appropriate evidence based information to improve understanding of ear health in a package that is fun and interactive.

It includes animations, a screening tool and examples of patient journeys. And it’s cute and funny!

Kong said the problem is by no means confined to Indigenous people but they are ten times more likely to suffer from ear disease and hearing loss than other Australians, and it can have a crippling and cascading effect throughout their lives.

He sketched the story of so many children whose hearing worsens because they struggle to access health services for effective treatment. He said:

“They end up with a chronically discharging ear or chronic perforations. They don’t hear well, so they don’t attend school well, they’re getting infections so their parents are fighting over who has to take the day off work this time. Rather than be that endearing kid, they become the trouble-maker. They don’t get the proper education they need or deserve, miss out on a lot of opportunities, and as a consequence get into a horrible cycle of poverty, unemployment, substance abuse, and poor relationships.

Then they meet someone, have a kid, and the cycle starts again. You can see that’s happened in the history of a lot of our people.”

And it can be seen in one terrible statistic: that 85 per cent of Aboriginal people in prisons had had hearing loss over their lifetime.

Kong said: “I think: what if I had met them when they were six and actually fix their ears then?” 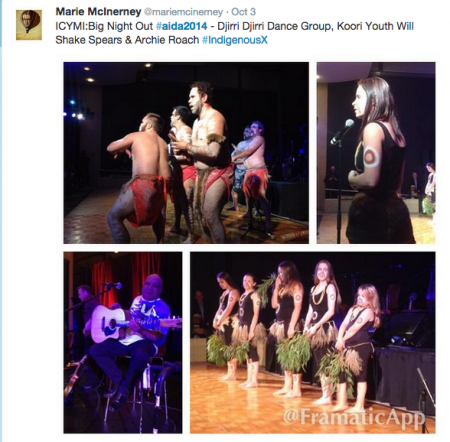 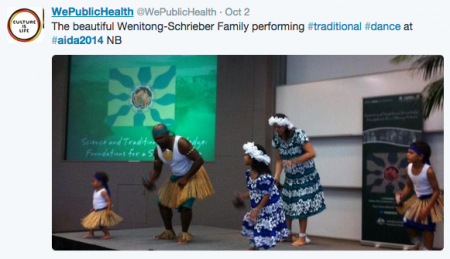 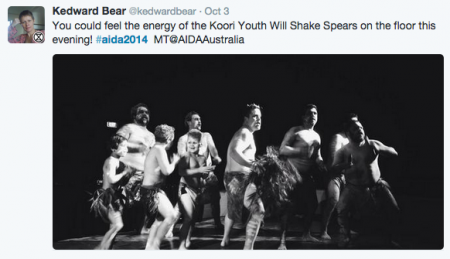 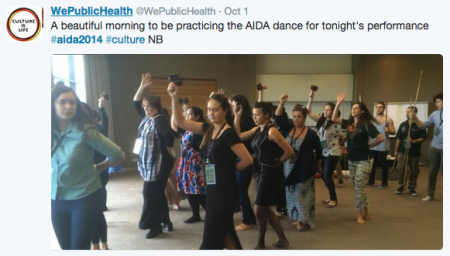 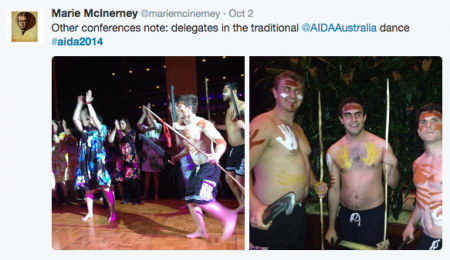 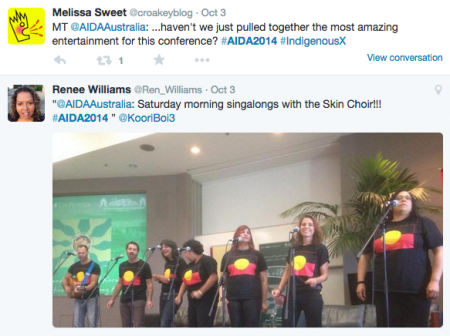 To end on a personal note, a highlight of the conference was receiving this autograph from Archie Roach for my daughter, Ruby, who is named in honour of two Rubys, one of them being Ruby Hunter. 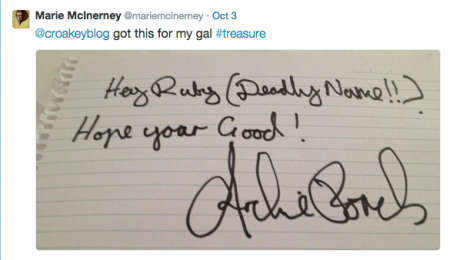 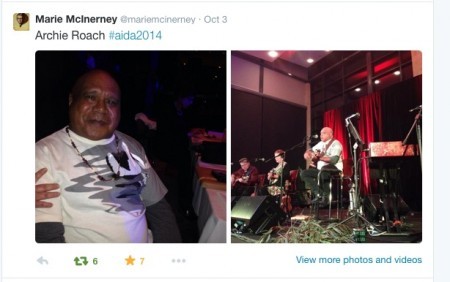 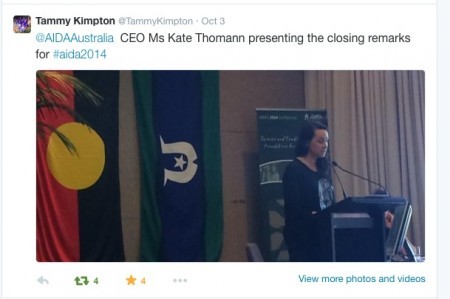 • This is the final Croakey report from the conference – track the coverage here.