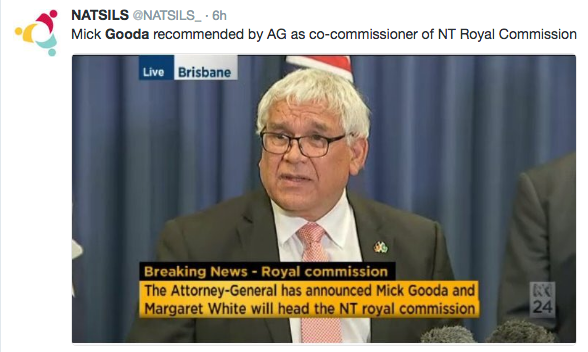 The appointments followed the resignation of former Northern Territory Chief Justice Brian Martin whose appointment last week to head the inquiry was widely criticised for lack of consultation with NT Indigenous groups and concern about his past role.

National Congress of Australia’s First Peoples Co-Chairs  Rod Little and Dr Jackie Huggins said the appointment of Gooda was a “wise choice” that showed the Federal Government was “finally starting to listen to our people”. See their full statement.

“It is also great to see that we have a balance of gender and racial expertise. Hopefully this will help ensure some equity in the investigations and the final report.”

“I see this as the first step taken by this government in resetting the relationship with the First Peoples of Australia. Hopefully, they will continue to listen and together we can work through some of the issues and concerns facing my people.”

The Change the Record (CTR) Coalition, which campaigns to address over-representation of Aboriginal and Torres Strait Islander people in prisons, also welcomed the Federal Government’s “change of heart” on the makeup of the Royal Commission following Martin’s resignation.

It said in a statement that the appointment of Gooda “will likely restore the faith lost in the Royal Commission by many Aboriginal and Torres Strait Islander leaders.”

“Mr Gooda is a well-respected member of the Aboriginal community and his strong experience in health, law and human rights will enable him to put the Royal Commission back on track.”

In a joint statement, Prime Minister Malcolm Turnbull and Attorney General George Brandis said the Federal Government acknowledged the importance of having Indigenous voices on the Commission given the high number of Aboriginal and Torres Strait Islander children incarcerated in the Northern Territory detention system and who are involved in the child protection system. They said:

Over the course of the last week, the Government has been speaking with Indigenous leaders, members of the community and justice advocates.

We have listened, and we have responded.

National Aboriginal and Torres Strait Islander rights advocacy organisation, ANTaR also welcomed Gooda’s appointment, but said it was shocked that the appointment of an Aboriginal Commissioner hadn’t been considered at the outset, particularly given Turnbull’s earlier vow to do things ‘with’ Indigenous people not ‘to’ them. Its statement said:

“The process last week flew in the face of that commitment and the government needs to urgently establish good engagement from the start of its term.”

‘One of Australia’s most highly regarded Indigenous leaders’

Gooda is a Gangulu man from Central Queensland who was appointed as Social Justice Commissioner in 2010, and is a current member of the Referendum Council  on Constitutional Recognition of Aboriginal and Torres Strait Islander peoples. He was previously chief executive officer of the Cooperative Research Centre for Aboriginal Health and a senior consultant to the Aboriginal Legal Service of Western Australia.

Brandis said Gooda is well known as one of Australia’s most highly regarded Indigenous leaders.

He has the respect of both sides of politics, as is evident from the fact he was appointed as the Aboriginal and Torres Strait Island Social Justice Commissioner by a Labor Government and reappointed by the Coalition Government.

With Huggins, Gooda has led the Close the Gap campaign to raise the health and life expectancy of Aboriginal and Torres Strait Islander people to that of the non-Indigenous population by 2030.

He is also a passionate advocate on Indigenous justice issues and vowed to make the over-incarceration of Aboriginal and Torres Strait Islander peoples a priority issue for the remainder of his term as Social Justice Commissioner. He has been a generous supporter of Croakey’s #JustJustice campaign, describing Indigenous over-incarceration as a “public health catastrophe”.

You can also see his initial response as Social Justice Commissioner to the brutal treatment of children detained in the Northern Territory criminal justice system, aired in the ABC Four Corners program last Monday 25 July, which sparked the Royal Commission.

#JustJustice team member, public health practitioner and Yorta Yorta woman Summer May Finlay said Gooda was a “fantastic choice” as Royal Commissioner and a strong advocate in the justice space whose appointment “is a sign the Government has paid attention to Aboriginal people”.

Brandis told journalists White is long practiced in the conduct of forensic proceedings, including commission proceedings.

Change the Record Co-Chair Antoinette Braybrook said the group still had concerns over the involvement of the NT Government in creating the terms of reference for the Royal Commission into the Child Protection and Youth Detention Systems of the Northern Territory, and their involvement going forward.

However, she hoped the Royal Commission created the necessary conditions for positive change and that its recommendations were fully implemented.

“We also hope that the Federal Government recognises that the Royal Commission provides an important opportunity for Federal and State/Territory Governments to take action on underlying factors driving the over-imprisonment of Aboriginal and Torres Strait Islander people nationally.

The creation of closing the gap targets on both incarceration and community safety through COAG, and investment in early intervention, prevention and diversion programs designed and implemented by Aboriginal and Torres Strait Islander communities,  would lead to the necessary mechanisms to address this national crisis.

As previously reported at Croakey, there were widespread concerns that a lack of proper process, and particularly a lack of proper consultation with Indigenous groups, would undermine the effectiveness of the Royal Commission, with bitter disappointment about both its terms of reference and composition.

Ahead of the new appointments today, NT Aboriginal peak organisations had welcomed the news that Commissioner Martin was stepping down and thanked him for a”courageous and difficult decision”. Spokesperson John Paterson said:

“We appreciate these past few days must have been a stressful time for him and his family and we commend his action in the face of the controversy that has surrounded the issue.

“We welcome his acknowledgement that his decision has been made foremost in the best interests of our children who are the subject of this inquiry.

“We wish to make it clear that his stepping down in no way reflects on his standing or capacity and we acknowledge his distinguished legal career.

The peak group, APO NT – Aboriginal Peak Organisations Northern Territory, called on the Federal Government to consult with them on any further appointments, which they said must include strong Aboriginal Co-Commissioners and come from outside of the NT justice system.

Croakey will update this post with their and further responses to the new appointments.

The Commission has no doubt Justice White and Mr Gooda will bring much needed perspective and experience to the Royal Commission.

“Mick is a great Indigenous leader who brings a powerful voice to those who need it most.” 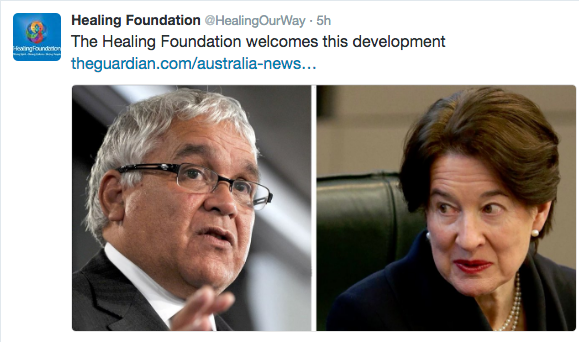