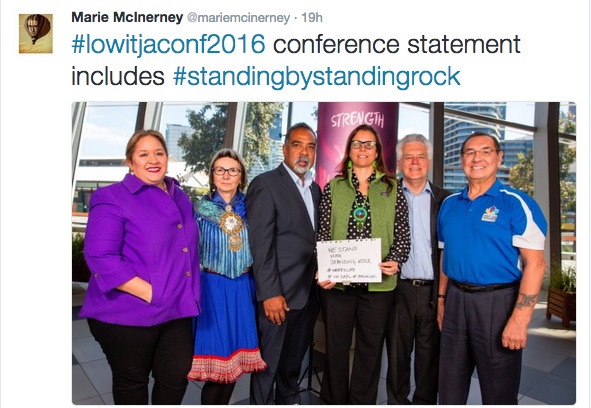 Delegates expressed shock at Trump’s election and concern over his past racist remarks and financial investment in the pipeline being fought by around 200 American Indian tribes through the #StandingRock protests.

“I’m praying and hoping there will be no damage but I’m not really confident,” Choctaw health leader Professor Karina Walters told Croakey after delivering a keynote speech on historical trauma at the Lowitja Institute International Indigenous Health and Wellbeing Conference 2016 in Melbourne.

“It’s so complicated,” she said. “We have Indigenous people who voted for Trump…I honestly don’t understand because it works against our best interests,” she said.

Walters is an enrolled member of the Choctaw nation of Oklohoma who directs the University of Washington’s Indigenous Wellness Research Institute.

She said there were concerns about Trump’s investment in Energy Transfer Partners, the company behind the Dakota Access Pipeline that about 200 American Indian tribes have come together to oppose as “water protectors” to stop it crossing the Missouri River.

“I don’t know how we are going to undo some of the problems around issues of our sacred rights and land title and water title with this presidency,” she said.

As it closed on Thursday, the Lowitja Institute conference, attended by delegates from Brazil to Norway, issued a statement calling for greater respect worldwide for Indigenous rights (as reported at Croakey) and declaring solidarity with the #StandingRock protests.

“Furthermore, the Conference stands by, and with, Standing Rock Sioux in its opposition to the Dakota Access Pipeline in the United States of America.”

Walters told delegates at the conference she had hoped to open her keynote with talk about the power of women, with the expectation that Hilary Clinton would win.

“Clearly we have a long ways to go, babies,” she said. “I’m in mourning at the moment.”

Walters said he had also made other “very derogatory comments…saying to other communities that they ‘don’t look Indian’ as if he’s the expert”.

“That kind of language is damaging, not just because it comes from a leader (who has been elected President). Those kind of comments really serve a purpose, they’re not accidental, they serve a purpose to maintain the status quo,” she said.

Walters said Trump may appoint an advisory panel to inform him on Indigenous issues, but she was “not convinced he understands, based on his prior comments, what the federal trust responsibility is, what our treaty rights truly are and what his responsibility is as president of the United States, what his obligations are to Indigenous people.

“I don’t know how we are going to undo some of the problems around issues of our sacred rights and land title and water title with this presidency,” she said.

Hawaiian delegate Kaiulani Odom from the Kokua Kalihi Valley in Honolulu said Trump had expressed “really no interest” in the Indigenous people of Hawaii and had been “pretty sexist and racist” in his remarks.

“It’s quite a shock to all of us that he is there,” she said.

She expected his policies to be “detrimental to all of us”, including on climate change, “but we have within our knowledge and foundation ways to persevere,” she said.

“We’ve faced adversity before and we will again,” she said.