Australia’s Health Ministers have agreed to the development of an Indigenous-led National Aboriginal and Torres  Strait  Islander Health and Medical Workforce Plan after a “landmark” meeting last week with Indigenous health leaders in Alice Springs.

Hunt said the plan, which he expected to be developed by year end, would make a huge difference to employment and career opportunities for Aboriginal and Torres Strait Islander people and “an even bigger difference to health outcomes”. It would, he said, in decades to come, be seen “as a fundamental moment not in Indigenous health, but in Indigenous employment and empowerment”.

“Under-spending on critical primary health care lies at the heart of widening mortality and life expectancy gaps,” she told the Roundtable. “It is hard to see how the mortality gaps will narrow until this is turned around”. More below.

The Workforce Plan was one of a number of commitments to emerge from the Indigenous Roundtable event held in Alice Springs on Wednesday on the eve of the latest Council of Australian Governments (COAG) Health Council meeting of federal, state and territory Health Ministers.

Indigenous health leaders from across Australia were invited to attend and speak directly about their issues of concern to the Ministers, in the first such meeting under COAG.

Hunt later said it led to “the most important COAG Health meeting I’ve had the privilege of attending…because at a level never achieved before, all states and territories, the Commonwealth, all ministers have agreed to greater focus on Indigenous health outcomes”.

Mohamed, who is CEO of the Congress of Aboriginal and Torres Strait Islander Nurses and Midwives (CATSINaM) and chair of the National Indigenous Health Leadership Forum, was invited to deliver the keynote address at the Roundtable.

In it she urged the Ministers to “practise deep listening”, which she said meant “being  willing to stay engaged, even when you may be hearing things  you do not want to hear, hearing things that challenge your world views or that make you feel uncomfortable”.

There could be no more glaring example of a failure to listen than the Federal Government’s lack of engagement with the Uluru Statement from the Heart, she said.

Citing cases like the poor treatment of the late Gurrumul Yunupingu and the death in custody of Ms Dhu, Mohamed also urged Ministers to show the same bravery and passion they had with introducing plain tobacco packaging to addressing institutional barriers for Indigenous people like racism in the health system.

“It is not acceptable that Aboriginal people who present to our hospitals with chest pain do not get the same level of treatment as other Australians,” she said.

She later told Croakey she was very encouraged by the Roundtable itself and the commitments and values expressed in the Indigenous Roundtable Communique (issued alongside the overall COAG Health Council Communique).

See below for the summary themes listed from the discussions in the communique.

Mohamed said the Roundtable had “laid significant groundwork” for a greater national effort on the cultural and social determinants of health affecting Indigenous people, including access to health care, housing, education and justice.

She welcomed the strong focus on cultural safety and acknowledgement of the need to eliminate racism in all health settings and services in the communique. She said:

“I don’t think I’ve ever seen a COAG communique that’s had racism named in it. That is huge, I think.”

Wyatt described the meeting as a “landmark” event, and told journalists that hearing from Indigenous leaders in Alice Springs “has had a profound impact on all of the Australian health ministers and they have given a very strong undertaking now that Aboriginal health will be a key item on their agenda”.

He and Hunt made a number of other Indigenous health funding announcements over three days in Alice Springs: $2 million to provide Aboriginal and Torres Strait Islander people with easier access to affordable prescription glasses, and $23 million through the National Health and Medical Research Council (NHMRC) for 28 new research projects.

But the key to all commitments will be in future funding of Indigenous health, which Mohamed warned was “now facing what amounts to a freeze on federal funding and very few new initiatives”.

In her speech, which she made available to Croakey, she said experts had estimated total government expenditure on Indigenous health across all jurisdictions “is about 60 per cent of the needs based requirements”.

See this recent Croakey story from University of Wollongong Professor Ian Ring on the “myths and market failures” in Indigenous health funding, which was published in the lead up to the COAG meeting.

“Preventable admissions and deaths are three times as high in Aboriginal and Torres Strait Islander people and we know primary health care services and prevention are the most important remedy,” Mohamed said.

“But we are only spending about half as much on the MBS (Medicare Benefits Scheme) for Aboriginal and Torres Strait Islander clients as we should be, based upon need.”

“Even worse, PBS (Pharmaceutical Benefits Scheme) expenditure is about one third of the needs based requirements,” she said.

Mohamed said these gaps in funding and services are exacerbated by the growing burden of out of pocket expenses — which are a huge barrier to care for Aboriginal and Torres Strait Islander people and many other Australians.

“The COAG Health Council should prioritise efforts to identify and fill the service gaps.  These gaps should be filled with satellite and outreach ACCHS services – which the evidence shows outperform mainstream services in identifying and managing health risk.”

Mohamed had also argued the “urgent need for a dedicated strategy for growing and supporting the Indigenous health workforce”.

While she said there was something to celebrate in having more than 3,000 Aboriginal and Torres Strait Islander nurses and midwives – “our largest single health profession” – Australia needed another 5,500 Indigenous nurses and midwives just to reach population parity. Factoring in the burden of disease would take that figure to 17,000,she said.

“If we can recruit and retain more Indigenous health professionals, then we are not only increasing the chances that Aboriginal and Torres Strait Islander clients will receive culturally safe care but we are also transforming the lives of these health professionals and their families through employment, role modelling, economic security and health literacy”.

Mohamed congratulated the Australian Commission on Safety and Quality in Health Care, and all those involved in developing the 2nd edition of the National Safety and Quality Health Service Standards and the accompanying User Guide for Aboriginal and Torres Strait Islander Health.

“These should go a long way to improving the cultural safety of the Australian health system -– to ensuring that when my family and I walk in to a hospital or a clinic, we are not automatically in fight or flight mode — but experience a sense of belonging, wellbeing and security.

“We now need to put at least as much effort into implementing these new standards –as we did in developing them.”

This was the list of summary themes issued in the COAG Health Council’s Indigenous Roundtable communique: 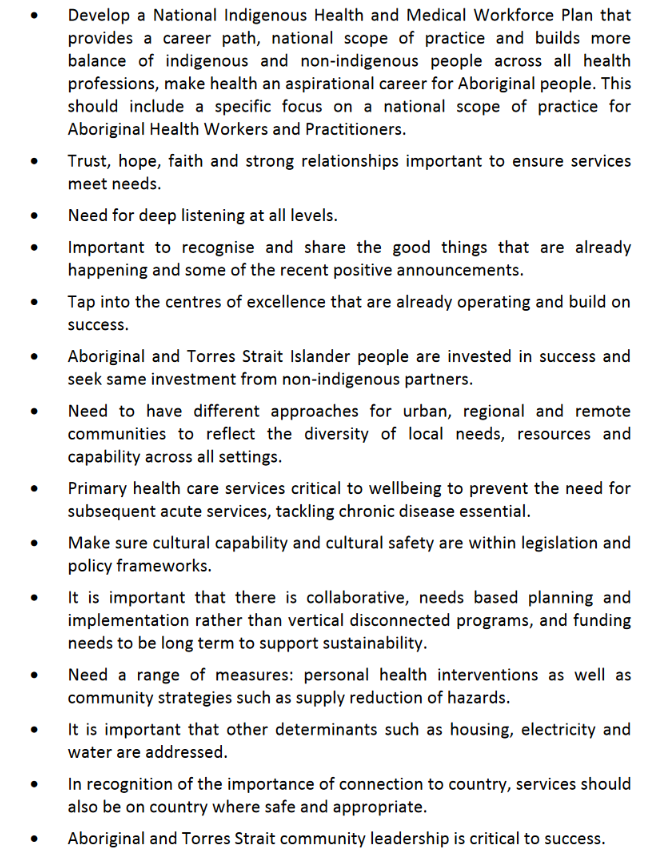 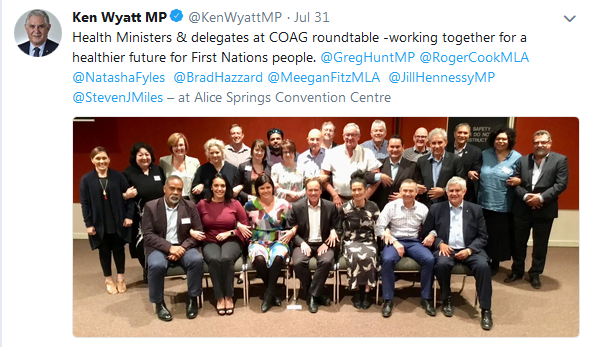 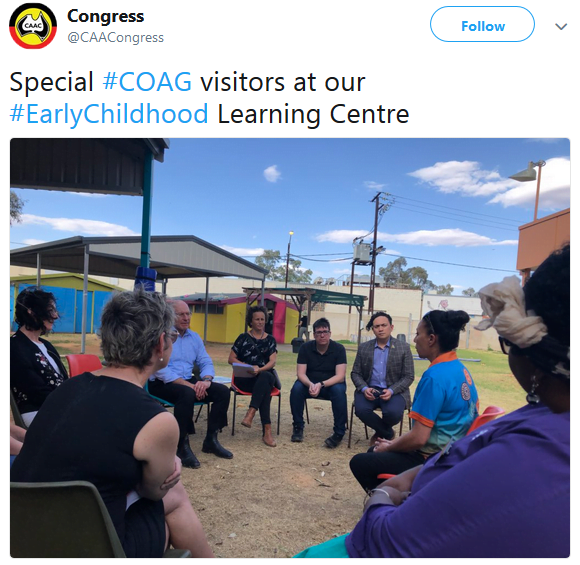 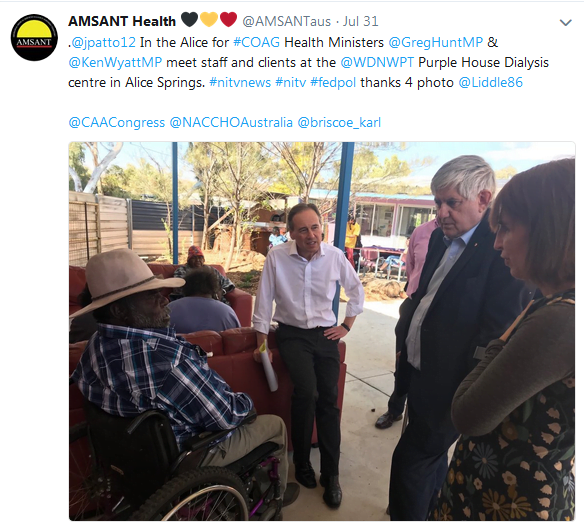 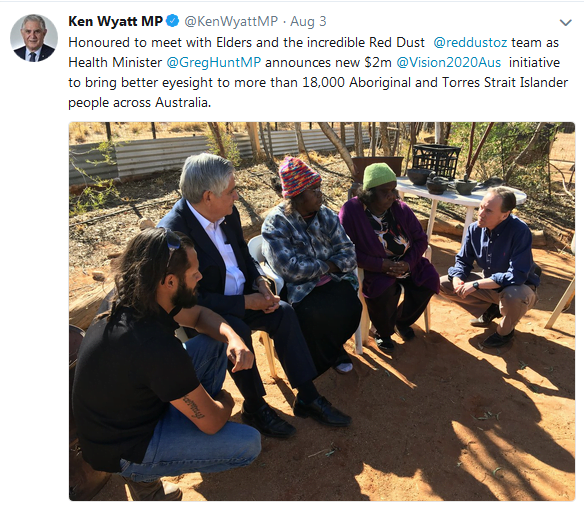 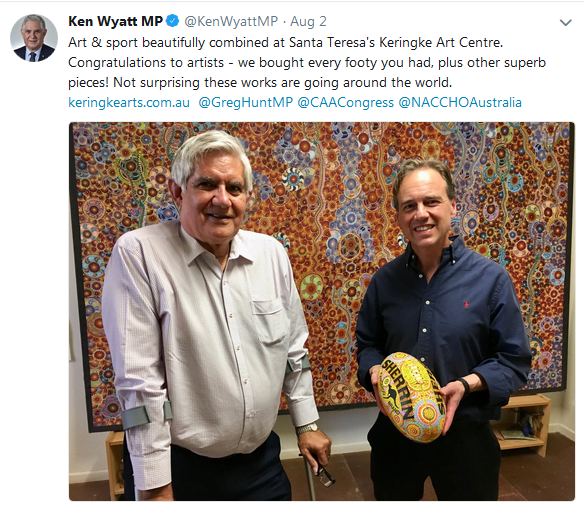 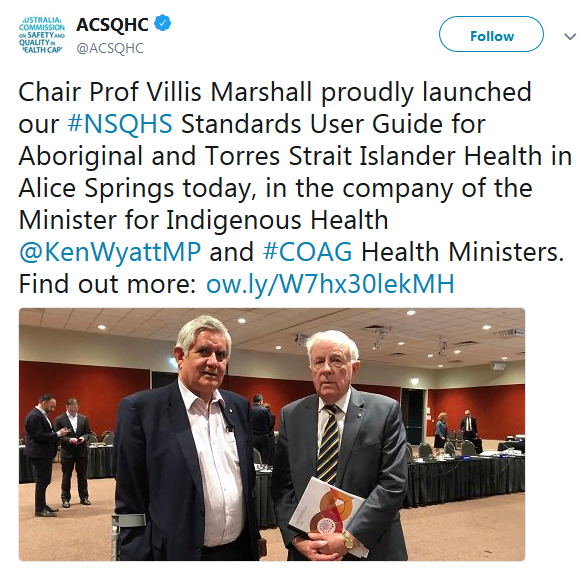 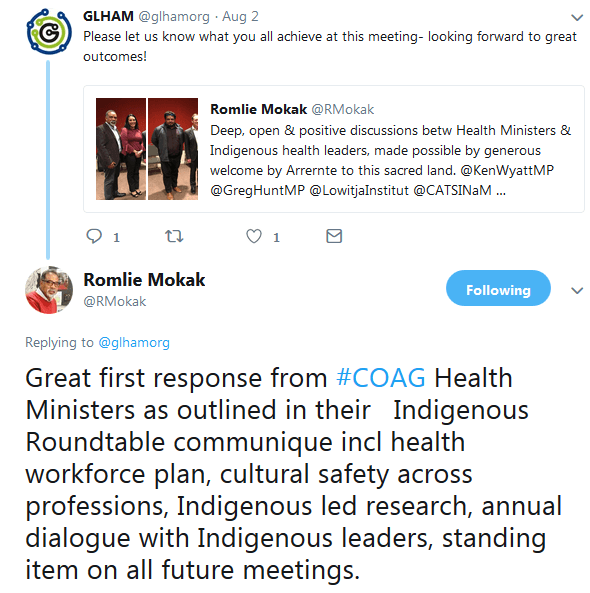 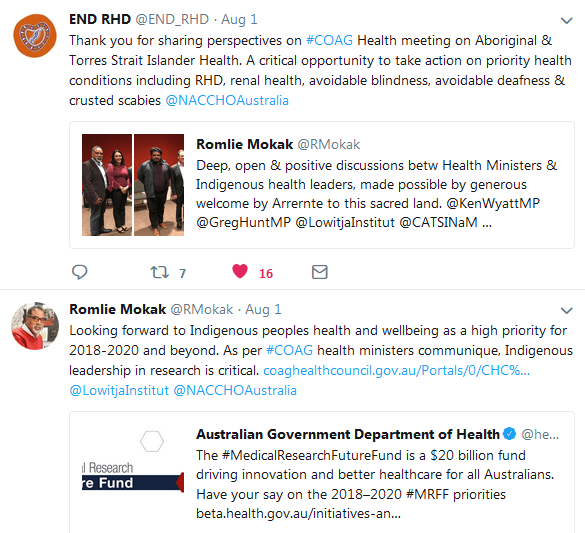 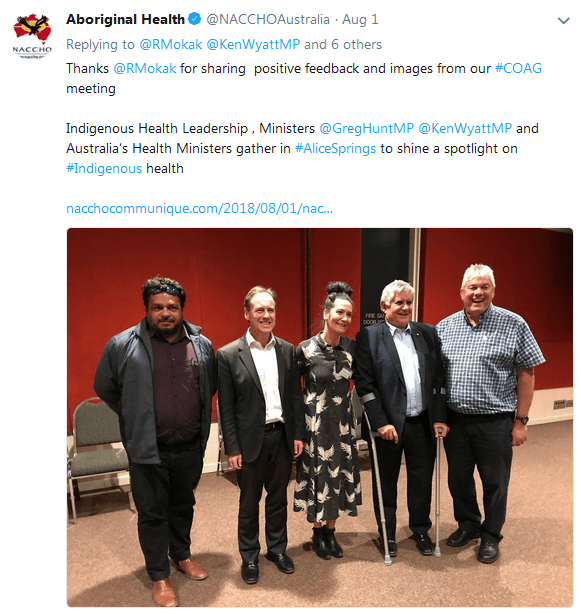 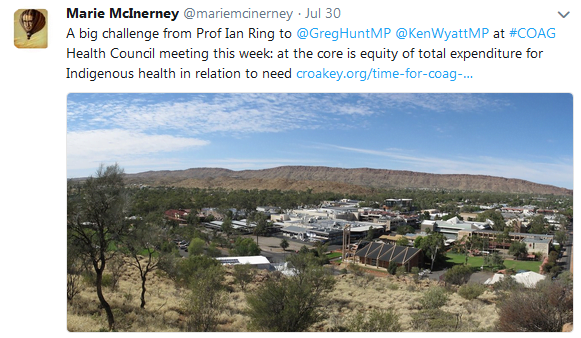 PrevPreviousSo now we have a National Sports Plan. But what does it really offer our health?
NextBacklash in Public HealthNext