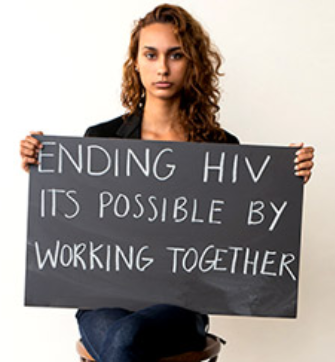 Elders and young people may hold the key to beating stigma and discrimination about HIV and AIDS and to promoting better prevention in Indigenous communities.

Eleven Aboriginal and Torres Strait Islander Elders from across Australia were special guests at the  International Indigenous Pre-Conference on HIV and AIDS, held in the lead-up to the 20th annual International AIDS Conference.

They sat in on presentations, and particularly joined in special yarning sessions where people who are most at risk from HIV – gay men, injecting drug users, brotherboys and sistergirls (transgender men and women), and women – told their stories. Delegates later said how important it was to have their presence and acceptance.

It turned out the Elders had plenty of their own stories to tell too. See below for their feedback.

The conference also launched ANTHYM, the Aboriginal Nations Torres Strait Islander HIV Youth Mob. Steered by James Saunders (who was put by Buzzfeed at the top of its list of 20 Inspiring Indigenous Australians), the aim is  to build a youth network to promote safe sex messages, health sexual relationships, HIV prevention and address stigma and discrimination for Indigenous people living with HIV and or hepatitis.

Its co-chair is well-known tweep Todd Fernando, who hosted @IndigenousX through the conferences, and it will have formal links with the Native Youth Sexual Health Network (NYSHN) that works on sexual and reproductive health, rights and justice in the US and Canada.

Saunders says it will be up the ANTHYM mob what they want to do, whether to be primarily a prevention/advocacy group or to move also into service provision, such as online peer to peer support to try to address high rates of STIs in many  Aboriginal communities.

Check out their website here, and below, some fabulous photos that they’ve been taking at AIDS 2014 and some very moving stories from the ANTHYM members. 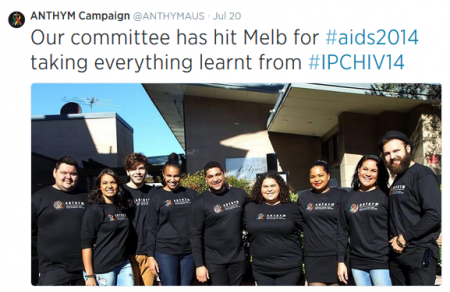 The news was out across the school. Everyone knew I was gay, even my teacher, which made me feel awkward in class. Boys begun refusing to sit next to me, have me on their team or in their group whenever we were in class. Making their reason obvious in front of the teacher, who remained closed lipped.

Lunch and recess were horrible and I actually dreaded the free time I had. Food and profanities were thrown across the schoolyard– most of which I will not mention for the comfort of your own ears and mind. Teachers, grade leaders and the principal despite my numerous complaints of having sandwiches, yoghurt, fruit, and other food thrown at me, threats of physical violence and insults, took no actions. I could not take it anymore and my only option was to stop going to school, I did not feel safe and I was not comfortable…..

The first day back at school came around quicker than I expected and I was so nervous I felt like being sick. I walked across the yard to the foyer for my grade and was greeted with “HOLY SHIT, THE FAGGOTS BACK! COVER YOUR ARSEHOLES BOYS”. I smiled and walked in, waiting for the classroom doors to open. I will admit it hurt and dampened my spirits, but I reassured myself I would get through this and make up for a missed year. I found friends fast – I was the gay best friend every girl wished they had and this began to keep me safe as the girls threatened to break up with their boyfriends if they kept carrying on.

It was hard but with perseverance, I got there and year nine was completed, it was the holidays and I could relax. I had settled back into high school with my newfound attitude and had a solid friend base that made me feel safe and happy. Of course, there were still some idiots but I liked smiling at them more than allowing it to hurt. I was confident year ten was mine and with that attitude, I took the year by the horns and rode it until the end, graduating in 2011.

High school years were most certainly the years where I faced the most discrimination. After leaving and beginning college, life became easier and was a lot more ‘me’ than high school.

Today though I want to share my ideas on how I think us, as leaders, advocates, community workers and the government can make our communities and schools safer for LGBTIQ people.

I believe whole-heartedly if there was ever a time in which we could end discrimination against LGBTIQ people in our communities and schools to make them feel safer, IT IS NOW. This generation more than any other is willing to make a change but there are a number of factors that contribute to stopping us. The marriage act as it stands right now, the lack of education and knowledge on sexuality and gender identity all empower homophobia and it needs to change. This gap between LGBTIQ people and the mainstream community further divides and segregates us from what Australians consider the norm.

Going down to the media conference for the International  Indigenous Pre-Conference in Sydney was an eye opener for me as a young gay male living in a remote part of Australia, to be in the city of Sydney was not only a culture shock but it felt like a weight lifted off my shoulders.

Yes I love my home town but I love the feeling of being with the ANTHYM crew here in Sydney made me realise that on our own, our voices are quiet, but together we can communicate our messages in a positive and safe environment.

Prior to coming to Sydney I had no knowledge of anything to do with HIV and AIDS, or the effects it has on Indigenous people. My knowledge is more on STIs and youth suicide.

On Thursday I got to engage and yarn with some of the youth from Redfern in a youth meet up. Watching the reactions of some of the kids and how they reacted to the reality of sexual health and activism for Indigenous people was truly amazing.

Elders in the room 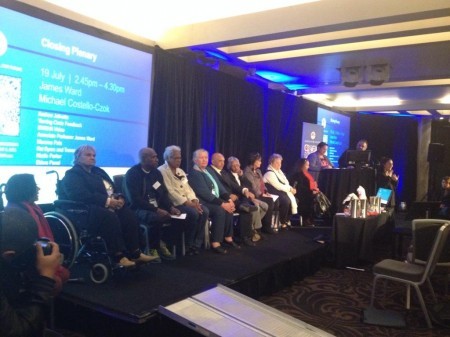 The 11 Elders officially closed the conference, relating and responding to stories they had heard and sharing some of their own. For privacy reasons, we only name one whose story has been publicly told.

One told how she had lost her son to HIV, admitting how fearful she had been of the disease in the early days but declaring: “God blessed me when he gave me Rodney”. She read from his writing, when he had been asked what advice her could offer other people with HIV:

“You must always know your past to have any understanding of your future. As Aboriginal people, we all have culture; it may not be the way it was but we all come from a unique past and future.”

Well-known performer Vic Simms told how his introduction to HIV and AIDS had been through international singer Peter Allen, who he toured with and who had interceded on his behalf when Uncle Vic had been thrown out of the Moree swimming pool in the 1960s for being black.

Another talked about going on a school trip to the cinema, when she was a teenager, and hearing the usher telling her teacher that she would have to wait until the film started before she could come in, because she was Aboriginal.

It taught her to stand up for herself, but she said discrimination was not just about colour: “We ourselves do discriminate against our own mob.”
The group of Elders recommended that a national group of Elders be formed to attend HIV conferences and be an ongoing part of the conversation into the future.

Another said “all this gay and transgender stuff is not new to me”, saying her husband had come out as a gay man after 15 years of being with her, and later died of AIDS.

She said for too long these issues had been taboo in Aboriginal communities, with people banished from their family and communities. “That can’t happen anymore,” she said.  “I talk about decolonising the white man. I’m thinking, am I decolonising our people too!”

“You reckon talking to white man is a challenge,” she laughed. “You try talking to your own people.”

Pre-conference co-organiser Michael Costello-Czok said the Eelders and young people will be two very important groups in the future to fight HIV and AIDS in Indigenous communities: “The strength and wisdom of Elders combined with energy and innovation, surely it has to work.” 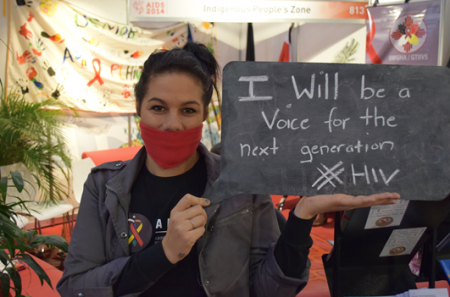 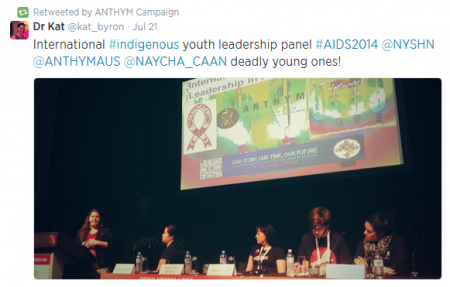 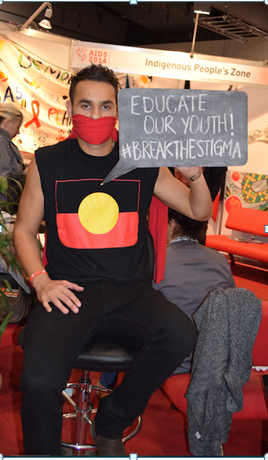 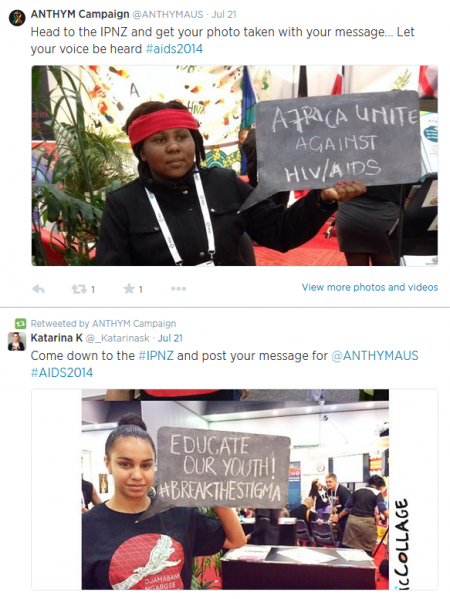