IndigenousNCDs: a call for States to include Indigenous peoples in non-communicable disease Declaration

Introduction by Croakey: Last Thursday (August 9) was gazetted as the International Day of the World’s Indigenous Peoples – according to a related United Nations webpage, that’s about 370 million people, living in 90 countries across the world.

On this annual observance, let us commit to fully realizing the United Nations Declaration on the Rights of Indigenous Peoples, including the rights to self-determination and to traditional lands, territories and resources.”

The 2011 United Nations Political Declaration on NCD Prevention and Control acknowledged the disproportionate impact of non-communicable diseases (NCDs) on Indigenous populations, and made a commitment to implement “culturally relevant policies and programmes for NCDs that involve indigenous people”.

Soon after, a paper from the NCD Alliance (a global network of more than 2,000 NGOs, scientific and professional associations, academic and research institutions, private sector entities and individuals with an interest in NCDs), provided a detailed analysis of health inequalities, and excess rates of NCDs such as diabetes, cardiovascular disease and respiratory disease in Indigenous populations worldwide. Amongst other things, the authors called for:

Yet progress in this regard to this aspect of self-determination appears to be slow.

The next UN High Level Meeting on NCDs will take place late next month in New York. A new Declaration will be ratified, but the current draft does not mention Indigenous people.

The post below is the first of a short series that Croakey will publish in the lead-up to the meeting, examining the implications for Indigenous peoples of the upcoming UN Political Declaration on Noncommunicable Diseases.

In response to the lack of inclusion of Indigenous perspectives and priorities in the draft, Summer May Finlay and Dr Kate Armstrong are co-chairing a movement that seeks to promote the voices and experiences of Indigenous peoples within the global NCDs discourse, #IndigenousNCDs.

Indigenous peoples are often not specifically mentioned in United Nations documents. When they are, they are often relegated to little more than a footnote under “vulnerable” groups.

The term vulnerable, in and of itself, is problematic because it denies the strengths within Indigenous communities. It perpetuates the notion that Indigenous peoples cannot drive solutions to issues facing them. 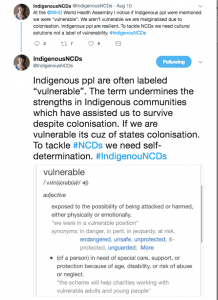 The lack of inclusion of Indigenous peoples in the Zero Draft Declaration ahead of the third UN High Level Meeting (HLM3) on non-communicable disease (NCDs) is the current status quo.

The Declaration is due to be finalised, and presented for ratification, at HLM3, which will be held in New York on the 27th of September 2018. Member states are currently in the process of amending the document. More information about the meetings can be found on the NCD Alliance website.

This situation has remained largely unchanged since the first UN HLM on NCDs in 2011. Involvement of Indigenous organisations and communities in global NCDs processes and consultations has been almost completely absent.

A new movement is seeking to change this situation.

#IndigenousNCDs is seeking to promote the voices and experiences of Indigenous peoples within the global NCDs discourse. The movement has a dual focus on raising awareness and advocating for inclusive language in the final UNHLM Declaration, and is committed to the principles of Indigenous control and Indigenous led solutions.

So why is it important that Indigenous people are specifically mentioned in the HLM3 Declaration? Why do we need Indigenous specific solutions?

As is the case in many countries, Indigenous people in Australia, New Zealand, United States of America and Canada are disproportionately affected by NCDs.

Diabetes, cardiovascular disease, cancer,  smoking related lung disease and mental health conditions are the five main NCDs identified by the World Health Organisation (WHO), and these are almost uniformly experienced by Indigenous peoples at higher rates than other people. 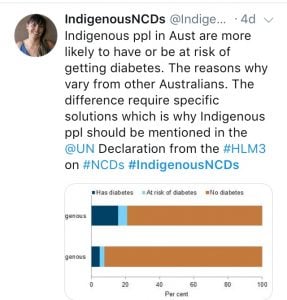 These numbers are not improving, despite national rates of smoking decreasing, and increased social marketing aimed at reducing sugar consumption and increasing physical activity.

Mainstream solutions do little to reduce the burden of NCDs for Indigenous populations. The broader social determinants of health have a huge role to play, and until these are addressed in a meaningful way, Indigenous peoples will continue to experience an inequitable burden.

What is required is not more state based solutions but Indigenous led solutions.

The right to self determination demands Indigenous led solutions

Indigenous led solutions, align with the principles with the UN Declaration on the Rights of Indigenous peoples described as self-determination. Articles 18 and 20 of the Declaration actually go further and state Indigenous People have the right to choose who will be actively involved in the decision making that affects them.

Indigenous peoples have the right to participate in decision-making in matters which would affect their rights, through representatives chosen by themselves in accordance with their own procedures, as well as to maintain and develop their own indigenous decision- making institutions.

Indigenous peoples have the right to determine and develop priorities and strategies for exercising their right to development. In particular, indigenous peoples have the right to be actively involved in developing and determining health, housing and other economic and social programmes affecting them and, as far as possible, to administer such programmes through their own institutions. 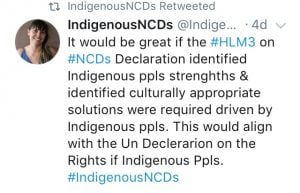 For many States, we imagine the enormous inequities experienced by Indigenous peoples is a source of great shame. If it’s not, it should be. And perhaps this shame may be one of the reasons why there is so little dialogue on Indigenous issues in the draft Declaration and other UN documentation relating to NCDs.

Any reluctance by Member States to include Indigenous peoples in the UN high level documents on NCDs demonstrates a lack of understanding that Indigenous led solutions are the absolute key to addressing existing health disparities. 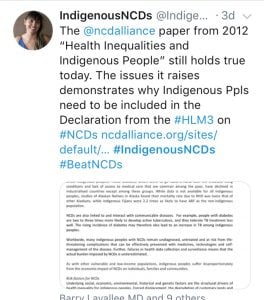 We call on civil society to step up and work in partnership and solidarity with the #IndigenousNCDs movement to advocate for States to include Indigenous people in the Final Declaration that will be launched at the third High Level Meeting on non-communicable diseases in New York on 27 September 2018.

We welcome Indigenous organisations and non-Indigenous allies to join us. Please join our efforts to call on all Member States to amend the current draft to include Indigenous people and seek a commitment to developing Indigenous targets for NCDs.

Together, we can make a difference.

Summer May Finlay is a Yorta Yorta woman who grew up in Lake Macquarie near Newcastle. She is currently undertaking a PhD with the University of South Australia, and is a Croakey contributing editor. She is convener of the Aboriginal & Torres Strait Islander Special Interest Group of the Public Health Association of Australia, co-vice chair of the Indigenous Working Group for the World Federation of Public Health Associations, and a co-chair of the #IndigenousNCD movement.

Dr Kate Armstrong is a public health physician, and the founder & president of CLAN (Caring & Living As Neighbours), an Australian-based NGO that is committed to a rights-based, community development approach to improving health outcomes for children who are living with chronic health conditions in resource-poor countries. At the UN Interactive Hearing on NCDs in July 2018, CLAN tendered a briefing paper, Non-communicable diseases in Indigenous populations – Raising the voices of Indigenous Peoples and Communities within the global NCD discourse. Kate is a co-chair of the #IndigenousNCD movement and founding chair of NCD Child 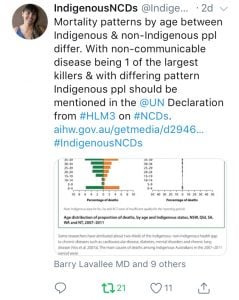 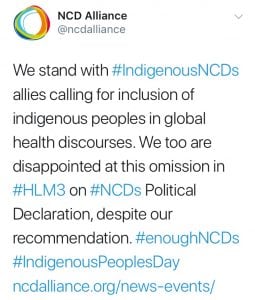 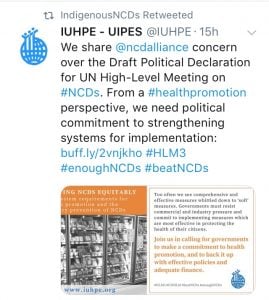 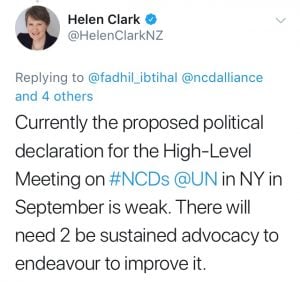 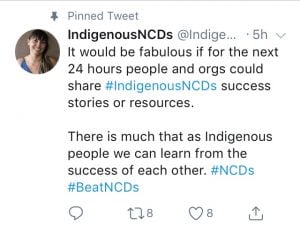 PrevPreviousUnpicking the history and the politics of drought policy in Australia
NextNew report: a call for action to address long-lasting traumas of Stolen Generations policiesNext