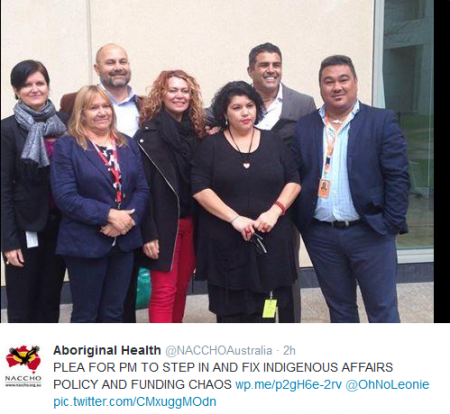 Updated to include statement below from the Victorian Aboriginal Community Controlled Health Organisation (VACCHO) on concerns about discriminatory changes to the way some Aboriginal organisations will be required to incorporate, and from the Close the Gap Steering Committee on cuts to anti-smoking programs.

National Aboriginal and Torres Strait Islander community leaders have called on Prime Minister Tony Abbott to personally step in to address the federal Indigenous Affairs policy and funding environment, which they say is “descending into chaos”.

The group issued a statement saying that, despite Government assurances to the contrary, Budget cuts to Indigenous Affairs were impairing the ability of community-controlled organisations to deliver frontline services in critical areas such as legal assistance, family violence, children, youth and women, drug and alcohol misuse, and health. It said:

“This threatens long term damage to outcomes for Aboriginal and Torres Strait Islander peoples and prospects for a reconciled nation.”

“There is virtually no evidence of coordination between government agencies responsible for funding Aboriginal and Torres Strait Islander organisations and programs. Buck-passing appears to be the norm.

“This environment is one of confusion and this is causing instability, anxiety and uncertainty. Despite requests for information from many of our organisations, there are few answers. We’re simply told to ‘put it in writing’. Then, when we do, we get no response.

The group said there was a disconnect between the Government’s stated narrowly-focused priorities of jobs, school attendance, and community safety and its actions.

It said that under the new Indigenous Affairs arrangements:

“How is community safety advanced when important building blocks such as crucial support for women and children experiencing family violence, and access to legal representation, are stepped away from?” the statement said.

The group has called for:

“We call on the Government to start talking to the leadership that is backed by our communities, to stop the confusion, instability and chaos, and to provide much needed clarity and certainty,” the group said.

The Victorian Aboriginal Community Controlled Health Organisation (VACCHO) today released a statement on behalf of members expressing concern that discrimination against Aboriginal organisations will jeopardise the capacity of the Aboriginal community controlled sector to deliver services to vulnerable and disadvantaged people across the country. VACCHO CEO Jill Gallagher said:

The Department of Prime Minister and Cabinet (PM&C) has announced that Aboriginal organisations receiving over $500,000 per year from the Indigenous Advancement Strategy (IAS) will be required to incorporate under the Office of the Registrar for Indigenous Corporations (ORIC), the federal body administering the Corporations (Aboriginal and Torres Strait Islander) Act (CATSI Act). Any non-Aboriginal organisation will be required to move their registration to Australian Securities and Investment Commission (ASIC).

ORIC has substantially more powers than ASIC to intervene in the governance and business of a registered organisation. ASIC is the nationally recognised registrar for corporations. Despite this, PM&C is refusing to allow eligible Aboriginal Organisations the choice to register with ASIC.

This is a discriminatory process. It flies in the face of Government commitments to respect and promote the rights of Aboriginal and Torres Strait Islander people as it takes away the right to self-determination.

We are not being treated as equals by the government. There is simply no evidence that a move to an Aboriginal specific legislation will improve health outcomes, or contribute to the Close the Gap targets.

VACCHO is concerned that the federal government’s decision will see a significant amount of funding redirected from critically needed, limited funding sources for front-line service delivery as hundreds of organisations are forced to make this move in order to receive funding from PM&C.

VACCHO has received an estimate of up to $42,500 for organisational legal costs to move to ORIC – we and our members are opposed to re-directing this amount of funding away from front-line service delivery!

The news comes as a blow to VACCHO as it is in direct contradiction of the commitment by the Prime Minister to consult with the Aboriginal Community on key policies that will affect them. This policy could create problems that the PM&C appears not to have considered.

The overall impact of these costs will have a significant impact on delivering services to the most disadvantaged people across Australia.

The Close the Gap Steering Committee has also urged a re-think on Federal Budget cuts to Aboriginal and Torres Strait Islander anti-smoking programs, saying research published in the Medical Journal of Australia shows they are likely to be detrimental in closing the gap in health inequality and financially counter-productive.