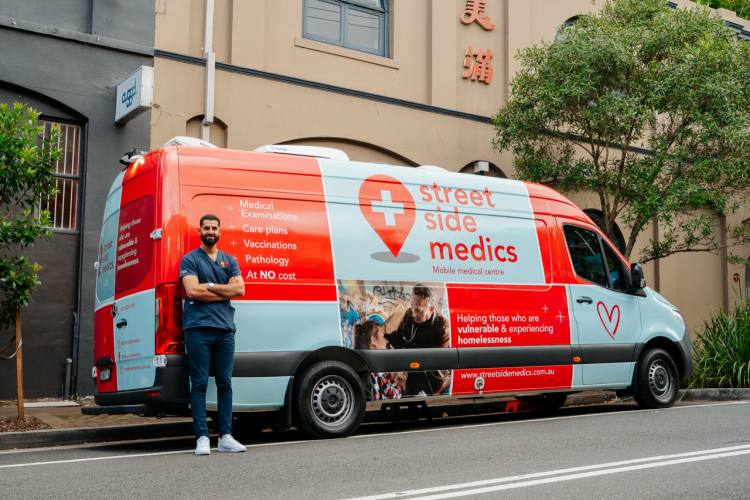 On the road . . . Dr Daniel Nour and volunteers take healthcare to the streets for vulnerable people. Photo courtesy of James Cook University .

Introduction by Croakey: A chance emergency medical intervention with a homeless man in London inspired an Australian medical student to start a mobile clinic in Sydney to take primary healthcare to people experiencing homelessness.

Dr Daniel Nour is now the Young Australian of the Year and training to be a cardiologist. He first set out with his band of volunteers in the Street Side Medics van in July 2020 and the charity now has 250 volunteers and two mobile vans.

In this interview below, first published by the James Cook University College of Medicine and Dentistry, Nour explains the genesis of Street Side Medics and its commitment to social accountability.

Below his article are some tweets from after his award was announced.

The idea of Street Side Medics started while I was on my final-year James Cook University medical school elective in London at the Imperial College. I had finished a shift and was walking to my university accommodation, and a man was having a seizure at Waterloo train station. It was quite a big crowd around him and there were no medical respondents, so I did my ABCs – made sure he wasn’t causing any harm to himself until his seizures stopped and made sure he stayed stable until paramedics arrived.

There were about four or five people surrounding him, all of whom were homeless. They were his friends and I was speaking to this one lady in particular, who said he was having multiple seizures over the last few months. She made a point that he didn’t take any drugs or drink alcohol but had continued to have the seizures. I remember asking, “Why has he not gone and seen a doctor or GP or been taken to hospital?” Her exact words, which I don’t often say, were, “Mate, the NHS barely gives a s*** about you, let alone us.”

What she was really trying to say, when I continued to explore that, was she felt like if they went to the emergency department or to a GP, they would just be labelled as homeless people who could be drug seeking or have behavioural concerns, especially if there was a past of that, and they wouldn’t be taken seriously. So they didn’t even bother going. She seriously had the sense that the healthcare system cared less for her than for the average person in society. That really slapped me in the face.

I’d been volunteering for a food service, which was part of my church at Woolloomooloo, on all of my university holidays back in Sydney. I was very familiar with the homeless population and the common judgements or preconceived ideas that society might have. I was aware that wasn’t always reality for them, sometimes things just went wrong and that led to people being in a tough spot. That knowledge, combined with an overwhelming sense that this lady and this community really believed that they didn’t matter to the healthcare system, made me do quite a bit of research.

After I finished my placement, I came back to Sydney and realised that whilst we had services for people who were experiencing homelessness, there were a number of significant barriers that limited access to healthcare: a lack of awareness of the services available, the costs involved, a lack of transportation, the documentation required, stigma and embarrassment, the structured appointment system. When I looked at all the different challenges, the solution I thought of was instead of expecting them to come and seek the service, taking the service to them, removing as many barriers as we can.

A GP-led, truly medical service was the model we went for: a van with a GP inside with a range of medical equipment. A common denominator amongst all people experiencing homelessness is the need for food, so we join with the food services. People are there to get food, they’re not there to see doctors. We have a range of volunteers inside the van who approach them and build a relationship. They offer them the service, which is free of charge, without the need for Medicare or any ID.

On top of that, it’s not just the medical service – we can actually do a lot in the van. We have all of your vitals machines: blood pressure, heart rate, oxygen, respiration rate. We have a small pharmacy in the van so if they need diabetic medication, aspirin, a statin or some other sort of medication, we can give it to them. We have the ability to take their blood, but we also have point-of-care testing so we can get their blood test results within a few minutes from within the van. We’ve got an ECG, an ultrasound, a spirometer. We can do small incisions and sutures, which is something I was comfortable with due to going rural quite a lot at JCU.

I got the idea in London in June 2019, the organisation was registered in February of 2020, and we had a van on the road in July of 2020, so it was one year from idea to conception. I put the vast majority of my personal money into it. I managed to get some help from some people who heard about the idea and wanted to support it in the early days. I leveraged all my contacts and everyone I knew. I think my young naivete helped a lot. I would walk into a law firm like Clayton Utz, which is the biggest law firm in Sydney, and I’d pitch them this idea.

I think being young but passionate and having a good pitch helped so I managed to get quite a lot of large corporates on board. I had some amazing mentors and supporters. One of them is Professor Ravinay Bhindi, who’s the head of cardiology at Royal North Shore Hospital. When I was having doubts or wondering why I was doing this to myself, he would give me guidance or help motivate me. I also just really read a lot. I read all the RACGP documents on setting up a general practice and all the different clinical governance documents required, corporate governance, how to set up a charity. It was a labour of love, but it was very fortunate timing that I started in my last year of medical school when I had the time and committed myself to it then through all of my internship.

It really is a team effort, a volunteer-run organisation. There are some amazing people who helped push it along. Every clinic has to have a GP, so they’re the core volunteer, but we have everyone: doctors, speech therapists, physiotherapists, occupational therapists, social workers, pharmacists and non-medical volunteers.

We’ve been going out to four clinics and actively expanding so we have a clinic in Woolloomooloo, Parramatta, Manly and Brookvale with the one van. We’ve seen hundreds of patients, most of whom haven’t seen doctors in many years or have health issues that have gone neglected for years. We’ve picked up quite a lot of chronic health conditions like diabetes, chronic kidney disease and thyroid dysfunction. Quite literally, the service has saved people’s lives both from medical issues but also mental health concerns. We’ve linked them in with other medical services and stakeholders to support them outside of our service. We’re only there for three hours a week so collaboration is essential.

The sense of achievement for patients when they come into the van – they have an issue, we can do something about it here and now, they can leave better than when they came in – really resonates with them. We’ve helped a number of people – I could count them on one or two hands – back into society. We’ve got them temporary or permanent accommodation, helped them to get a job and then now they’ve broken the cycle. More than anything, that’s provided hope, especially in a dark time.

I was born and raised in Sydney and chose to come to James Cook University because I had a few friends that were a few years my senior who were studying at JCU and thoroughly enjoyed it. When I looked at all the different medical degrees, JCU was unique in the fact that it had that focus on rural and remote medicine as well as Aboriginal and Torres Strait Islander healthcare.

My six years at JCU included a couple of rural stints, the most memorable being a term in Mossman in my final year of medical school. It was three months and I loved every minute of it. The regional and remote placements made me very confident coming out of JCU. I had the clinical skills as well as some of the procedural skills to be able to utilise at Street Side Medics. Through JCU, I learned of the impact of community health initiatives but also about socially diverse cultures and communities and how we need to be culturally appropriate and socially accountable.

I’m doing my Basic Physician Training (BPT) in 2022 at Royal North Shore Hospital with a goal of getting into cardiology. I have always been keen on cardiology, and during my fourth, fifth and sixth year of uni, I was doing a lot of research at Royal North Shore Hospital. The head of cardiology there managed to help me get the London placement with Dr Rasha Al-Lamee, Professor Darrel Francis and Dr Justin Davies, who are some of the biggest names in the field.

We’ve got 220 volunteers with Street Side Medics at the moment. The second van is being finalised and I’ve hired a CEO, who has just started. Managing it along with work has been a huge challenge and coming into BPT, my priority is to pass my exams. Getting a CEO on board means they can commit full-time energy to it, but more than that, grow Street Side Medics into a national organisation. The biggest cry for help has come from Melbourne. We’re hoping to send the second van interstate and continue to grow from there.

Dr Daniel Nour is the founder of Street Side Medics and a junior medical officer at Royal North Shore Hospital in Sydney. 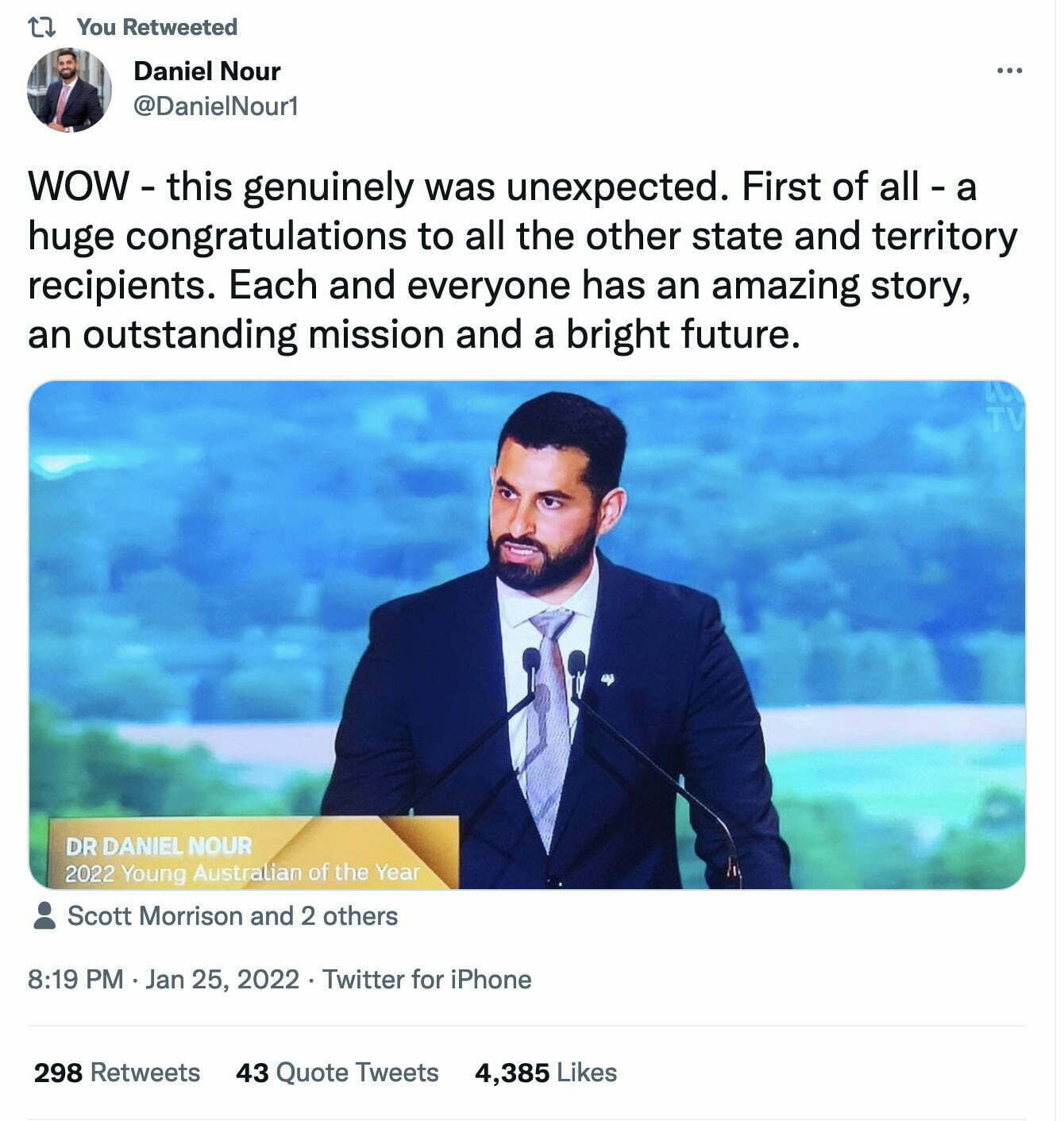 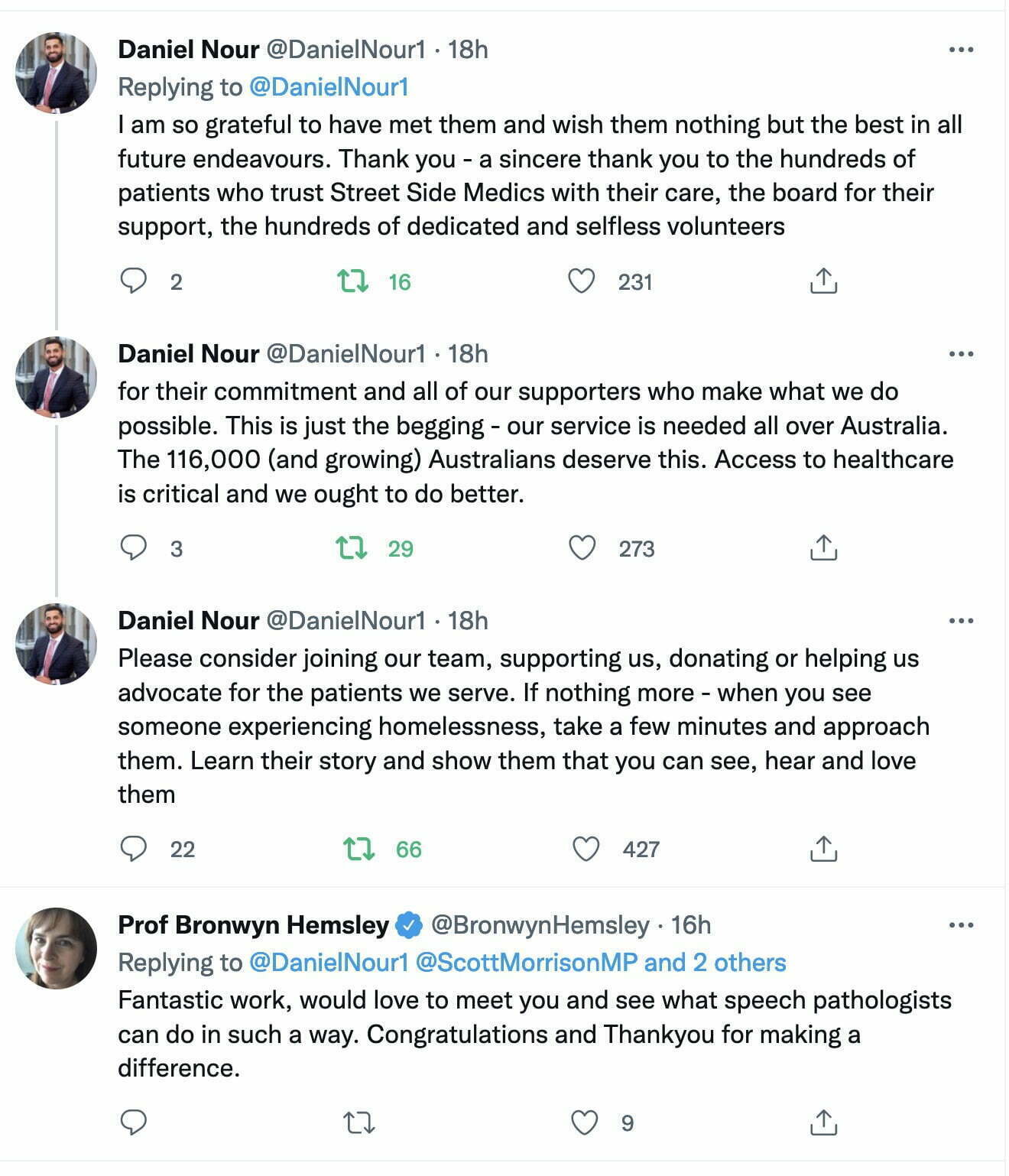 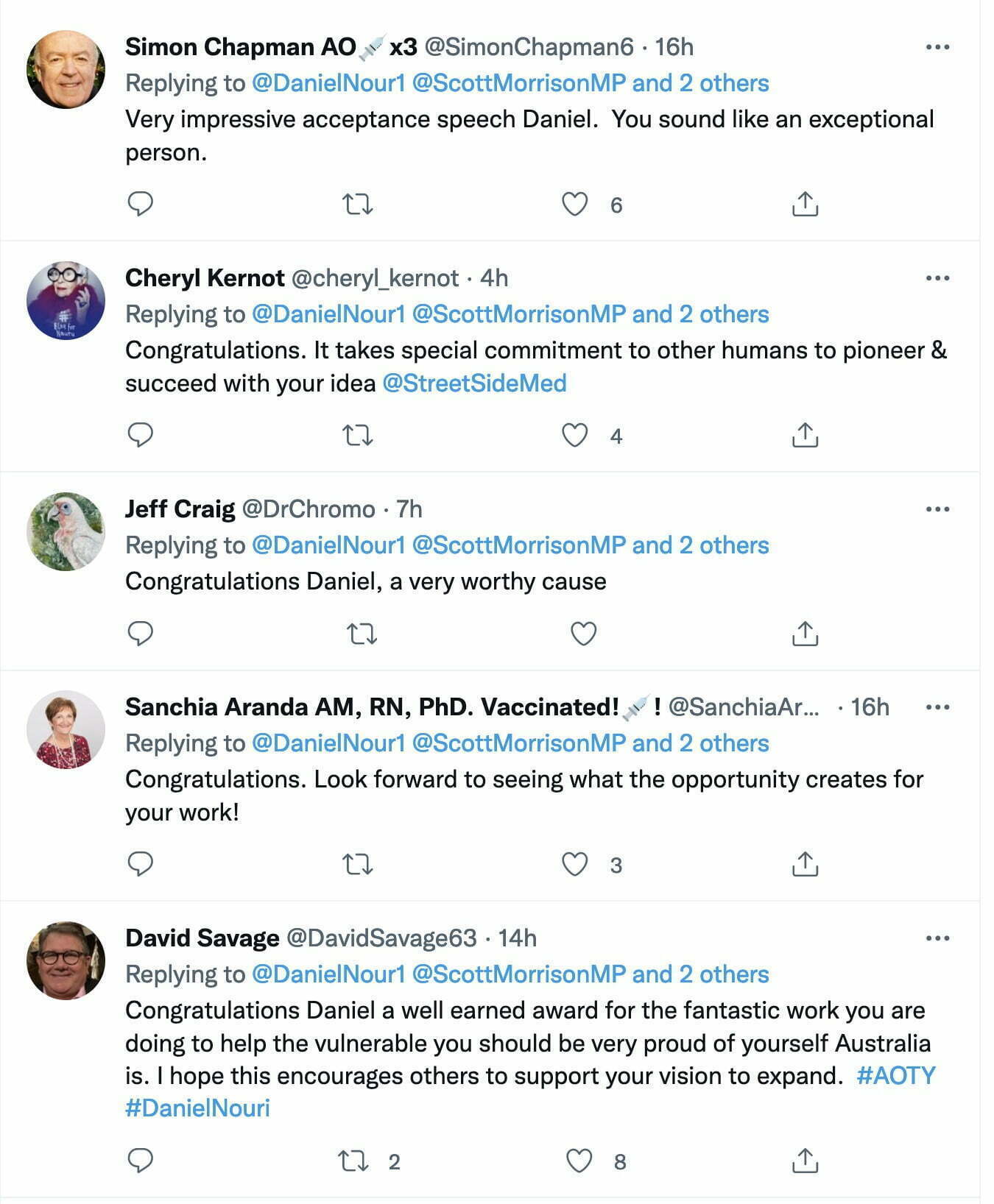 See Croakey’s archive of stories on housing and health.