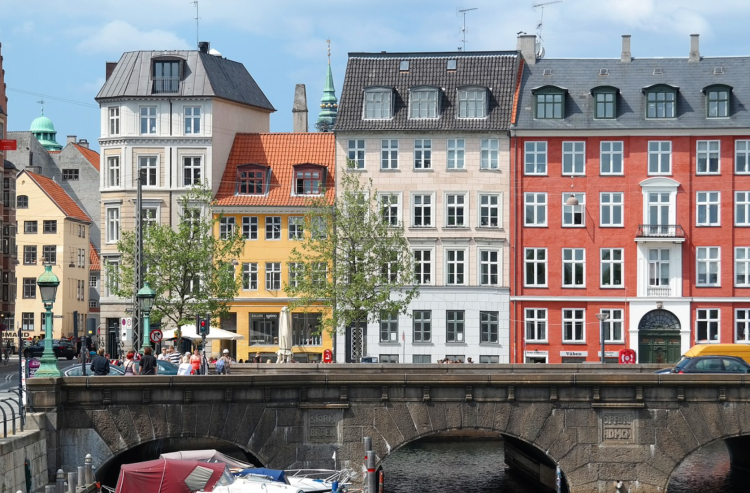 Inequity in health – we can’t handle the truth…

If we want to improve health equity in Australia we need to look critically at the ways in which we collect, analyse, interpret and publish data.

Below she draws on her professional and personal experience in several northern European countries to analyse the ways that different societies approach health equity and suggest why Australia is not making enough progress in this area.

If Australia wishes to improve our performance on health equity we need to be able to collect, crunch, interpret and publish (the right) information.

The governance architecture of our nation does not allow for the objective, truth-seeking and constructive view required to achieve this.

This is particularly true for politically contentious areas, such as income and poverty, Indigenous incarceration, health inequities, child abuse and family violence.

It also applies to how we engage with global issues, including emissions targets, our role in international conflict and unfettered industry engagement in (inter)planetary resource destruction.

My recent involvement in writing a report on measurement of health equity in the context of poverty prompted me to reflect on how we, in Australia, collect, crunch, interpret and publish (the right) information – and how we don’t.

All welfare states are equal, but some are more equal…

The Nordic welfare state model is often held up as an example that Australia should follow if we are to address our sliding rankings on the Sustainable Development Goals (where we definitely punch far below our weight at #35) or climate change action (wooden spoon).

Having lived in a number of northern European countries, I can vouch for the greater transparency, accountability and solidarity in these socio-political systems.

However, I would also offer some cautions to those who think Australia can easily emulate such models.

My experience has taught me that it is virtually impossible to change “The System” overnight – or even at all. The success of Nordic and Bismarckian welfare states has not been the result of a conscious (autocratic or democratic) decision but rather the result of centuries of relatively close-knit joining of forces.

One reason for the sense of togetherness, solidarity, social coherence and trust in public authority in countries like Sweden, Finland and Denmark is the threats they face from natural forces – water in The Netherlands and dark, cold winters in the Nordic nations.

Australians face similar environmental threats. Drought, heat, fire and isolation are an explanation for the great senses of solidarity, social and ecological justice, and community in Aboriginal communities.

Unfortunately our welfare state has not been shaped by these values. Instead we collectively follow a different model, one described as “ultra-liberalism” by the father of welfare state typologies, Gøsta Esping-Andersen. This is also the model followed by the USA and the UK.

This is not a deliberately designed model – it is an almost immutable template for some specific statehoods. It is only determined to a very limited extent by the political proclivities of the day.

For instance, the Swedish welfare state has persisted during periods when the social democrats are not in government, or are governing in coalition with parties from different ideological backgrounds.

The Nordic welfare state is more of a social paradigm than a political choice.

This paradigm dictates key planning responsibilities and the assumed role of communities. They include priorities in data collection and processing.

What is considered progressive in ultraliberal social paradigms will be considered stale and conservative in others: Australian Labor, in the eyes of a Norwegian social democrat, is decidedly right of centre neoliberal.

This has consequences for what we want to know and how we know it.

The Netherlands, Denmark and the London tube

In the 1980s, The Netherlands started to get concerned with unconscionable differences in health, quality of life, suffering and disability, inspired by social epidemiology from the UK.

A high level commission, chaired by a conservative former minister of social affairs, Wil Albeda, was convened. It was very well resourced, and deliberately framed as a joint national concern across sectors and stakeholders.

Its first report (1989) presented evidence for the existence of ‘socio-economic health inequities’ (social-economische gezondheidsverschillen, or SEGV). This was a wake-up call to most Dutch people who thought they lived in welfare heaven.

The report found that health inequities were significant (up to 12 years difference in life expectancy between different neighbourhoods in the same city) and systemic. It clearly demonstrated that these inequities were a consequence of the structural design of the state.

A second report (1995) outlined ways of framing and implementing interventions. This led to a more transparent, accessible, and on-going package of policies, parliamentary focus, and accountability.

They include a front-end website hosted by the National Institute of Public Health RIVM with readily accessible maps across thousands of indicators showing health threats and opportunities. With a few clicks anyone can correlate a vast range of statistics on social and political determinants of health with a vast range of health and disease measures. 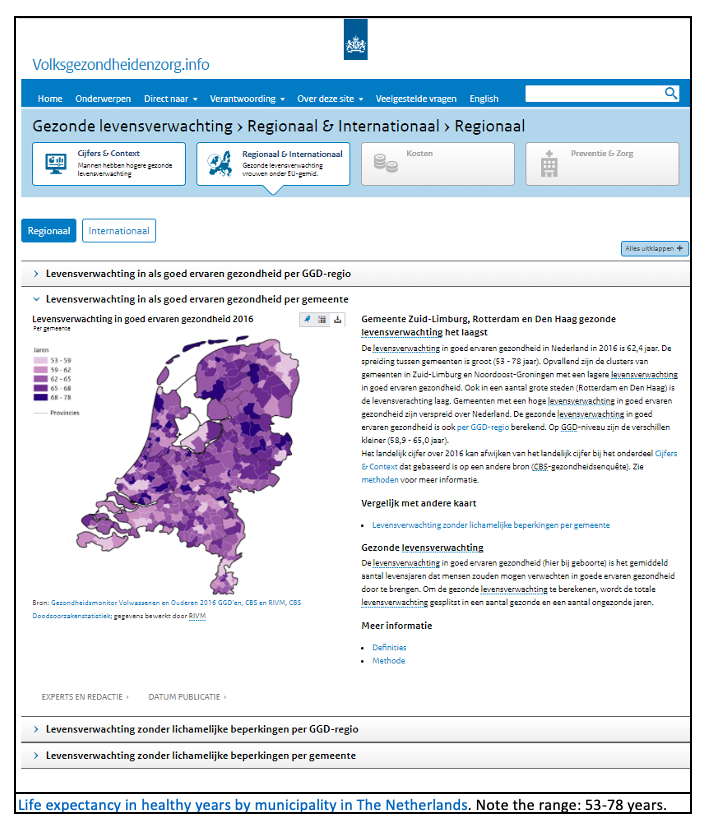 The public accountability and rapid access of information is matched by an increasingly sophisticated package of institutional and legislative arrangements that require local governments, at neighbourhood level, to shape health interventions that deliberately aim to reduce health inequities.

Progress is slow, but deliberate.

When I moved to Denmark I noticed that its policy systems architecture also allows for the collection of data, all the time, at high resolution, on virtually everything. For an epidemiologist in Denmark the question is not ‘how do I collect my data’ but ‘how do I access the data repository that I need’.

The Danish Health Board (Sundhedsstyrelsen) has a longstanding interest in health equity and generates an almost overwhelming amount of data. Equally overwhelming was the realisation that, based on a similar (and possibly more data rich) foundation, the Danes come to different policy and intervention conclusions.

The Dutch government continues to see systems factors in addition to lifestyle interventions as a way of getting out of the persistent and unacceptable, avoidable and unfair, differences in health, disease, disability and longevity.

The Danes base themselves in different traditions: for them, the key to reducing health inequities is earlier, more comprehensive, and more inclusive, education that continues throughout the lifecourse. Investment, early on, in individual and collective capability is integral to the Danish welfare paradigm.

This needs to be complemented by four national programmes of evidence generation and dissemination: epidemiological; sociological; intervention; and implementation research and integration.

Both countries rely on publicly accessible, accountable, real-time data on the health of individuals and the community as a precondition for credible and effective policy making.

One famous example of health data in action is life expectancies mapped onto the London tube map. 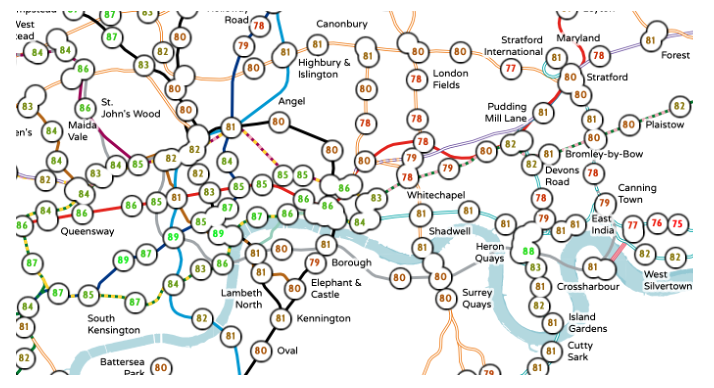 Many public health experts, such as Professor Fran Baum, would emphasise the importance of ‘upstream’, ‘distal’ or systems interventions in the social, commercial and political determinants of health. I tend to agree, as the overall architecture of a system drives the ways people and communities, and their institutions, are enabled to resolve social and health issues.

In this respect, the Danish behavioural/educational approach may be interpreted as less than comprehensive, and perhaps not in line with the Nordic welfare model. But while it can easily be accused of suffering from ‘lifestyle drift’, there is good evidence that it works.

A Nordic equity centre in a sunburnt country

At CHETRE (the Centre for Health Equity Training, Research and Evaluation) we embrace this public, systemic view of health and the factors that cause and threaten it.

We were very happy, then, to join in with the ACOSS-UNSW Poverty and Inequality Partnership to write a report on Health Equity in Australia.

Our plan was to use PHIDU (Public Health Information Development Unit) insights to ‘do a Marmot’. That is, to generate high resolution maps that would correlate a number of dimensions of the social gradient (including social and cultural determinants of health, geospatial parameters, and access factors) against health and resilience indices (like sense of coherence, social capital, DALYs and years of life lived in full health, engagement in social processes, etc).

This approach is based on a more complex understanding of health equity than colloquial definitions of health and inequality.

Everyone involved with our project agreed that Australia needs to take a long hard look at its abysmally unfair track record for health equity.

But unfortunately we felt that our sophisticated approach to the topic was hard to swallow and much of what we wanted to say was modified in the production process.

The end result is a report with an overly simplistic message (that your income level correlates with your disease level) which does not express the outrage we feel about the unacceptable social and health chasms in this country.

For example, the median age of death (a slightly different statistic from life expectancy) in the West Arnhem LGA among men is 51 years (and that median is probably elevated because of a few white folk with greater longevity than some black males).

This means that half of male West Arnhem-landers cannot expect to live beyond their 52nd birthday, a staggering 37 years less than women in Ku-ring-gai (in North Sydney) and similar to the life expectancy in the Central African Republic).

Our (local, state/territory, federal) governments time and again claim pride in being the wealthiest and luckiest, and even among the healthiest, countries in the world.

They refuse to face the truth – we are also one of the most unequal and inequitable nations.

I believe that one reason for this is that the systems architecture of our nation, its institutions and beliefs, does not allow for the transparency and graphic elegance that is required to communicate complex social narratives. It ought to be up to advocacy groups like ACOSS, activist scholars like CHETRE and its partners, engaged community groups from around the nation, and others that do share the belief in ‘a fair go’ to stand up and change the belief systems that drive our existence.

See our extensive archive of stories about health data

PrevPrevious‘Art is our voice’: call to support Indigenous arts, not just sport, in pandemic
NextPutting the priorities in health and health care for young people on the agendaNext