From the Deaths in Custody Watch Committee Facebook page

**WARNING: Aboriginal and Torres Strait Islander readers are warned that this article contains an image of a deceased person **

The long-awaited and damning findings into the 2014 death in custody of Yamatji woman Ms Dhu raise serious issues not just for governments and police, but also for health and medical systems and practice in Australia.

Fogliani said both police and hospital staff were influenced by “underlying preconceptions” about Aboriginal people.

She said that led them to believe Ms Dhu was exaggerating or feigning symptoms of being unwell when in fact she had suffered “a catastrophic deterioration in her health” while she was in custody, that could have been prevented with antibiotics treatment.

See below for her summary and recommendations – or you can read the full findings. Croakey will also update this post with Twitter coverage and responses to the decision. You can follow the hashtags #Dhuinquest and #MsDhu on Twitter.

The Coroner said she did not find that any HHC staff or police were motivated by “conscious deliberations of racism” in their treatment of Ms Dhu, but said it would be naiive to deny the existence of “societal patterns that lead to assumptions” about Aboriginal people. She said:

“This is not a matter only for HHC, or its staff or  the  police. It is a community wide issue and until there is  a seismic shift in the understanding that is extended towards the plight of Aboriginal persons, the risk of unfounded assumptions being made without conscious deliberation continues, with the attendant risk of errors.”

Ms Dhu, whose first name is not published for cultural reasons, died from staphylococcal septicaemia and pneumonia stemming from injuries related to family violence. She had been imprisoned for$3622 in unpaid fines.

At the urging of her family, who have long campaigned for justice in the shocking case, Fogliani agreed to release CCTV footage of her last hours in custody, minus the final moments before her death. This report from The Age includes the distressing footage, which shows Ms Dhu being dragged along the floor of the police lockup while gravely ill. 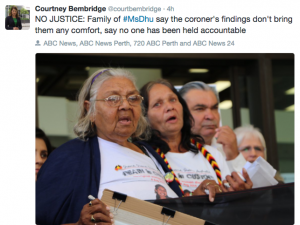 Media reported Ms Dhu’s family as saying they were unhappy with the Coroner’s findings because nobody was being held accountable. Some on Twitter shared their frustration, as did the National Congress of Australia’s First Persons, which said in a statement:

“Whilst Congress cautiously welcomes the recommendations from Coroner Fogliani, we strongly believe that the findings fall short and should recommend prosecution for those whose negligence and racism (whether unconscious or conscious) resulted in the death of a young Yamatji Nanda/Bunjima woman.

“It is unacceptable that in 2016, our people die in custody because they are let down by both the health care system and the justice system.”

In her 165-page findings, Fogliani notes that it is not her role “to assess the evidence for civil or criminal liability”.

However her findings and recommendations put pressure on police and health authorities to hold individuals and their systems to account and for major justice reform from the Western Australian Government. The Coroner has recommended:

She also urged mandatory, comprehensive and ongoing cultural competency training for police, but although she examines and critiques the role of health professionals involved in Ms Dhu’s treatment, she does not make similar recommendations on cultural safety in health care.

The Coroner found that:

Regrettably the actions of some of the clinicians at HHC were affected by premature diagnostic closure, and errors were made. Ms Dhu’s suffering as she lay close to death at the Lock-Up was compounded by the unprofessional and inhumane actions of some of the police officers there. All of the persons involved were affected, to differing degrees, by underlying preconceptions about Ms Dhu that were ultimately reflected, not in what they said about her, but in how they treated her.

Inquest into the Death of Ms DHU: Coronial findings

I recommend that at every police station where detainees are held, there must be a dedicated lock-up keeper. Alternatively that a minimum of two officers are rostered for custodial care duties at any time.

I recommend that a mandatory training course on the roles and responsibilities of lock-up keeper/supervisor be developed and introduced across Western Australia and that a component of the training be undertaken face-to-face. Successful completion of the course ought to be mandatory before an officer can be assigned lock-up keeper/supervisor duties.

Recommendation No. 3 & 4 : In connection with police improvements on cultural training the State Coroner made the following recommendations:

I recommend that the Western Australia Police Service develops its cross-cultural diversity training to address the following:

I recommend that the Western Australia Police Service develops its training for police officers who are transferred to a new police station to address the following:

Recommendation No. 5 : In connection with medical information provided by medical staff to police on the health of detainees the State Coroner made the following recommendation:

I recommend that Parliament consider whether legislative change is required in order to allow medical clinicians to provide the Western Australia Police Service with sufficient medical information to manage a detainee’s care whilst in police custody. Allied to this is a consideration of the safeguards concerning that information.

Recommendation No. 6 & 7 : In connection with sentencing reforms for low level offending the State Coroner made the following recommendations:

I recommend that the Fines, Penalties and Infringement Notices Enforcement Act (WA) (section 53) be amended so that a warrant of commitment authorising imprisonment is not an option for enforcing payment of fines.

Alternatively, that the Fines, Penalties and Infringement Notices Enforcement Act (WA) (section 53) be amended to provide that where imprisonment is an option, the imprisonment must be subject to a hearing in the Magistrates Court and determined by a Magistrate who should be authorised to make orders other than imprisonment if he or she deems it appropriate.

I recommend that the pending reforms outlined by the Justice Ministers’ Working Group concerning the following measures be given a high priority for consideration by Parliament, with a view to providing alternatives to incarceration through legislative reform:

Recommendation No. 8 : In connection with detainees being transported to the nearest prison the State Coroner made the following recommendation:

I recommend that fine defaulters, if incarcerated pursuant to a Warrant of Commitment, should be transported to the nearest prison within four to eight hours of their arrest, where the transport time does not exceed the detention period.

Recommendation No. 9 : In connection with the Aboriginal Visitors Scheme the State Coroner made the following recommendation:

Recommendation No. 10 : In connection with the consideration of the introduction of a Custody Notification Service to operate alongside the Aboriginal Visitors Scheme the State Coroner made the following recommendation:

I recommend that the State Government gives consideration as to whether a state-wide 24 hours per day, seven days per week Custody Notification Service based upon the New South Wales model ought to be established in Western Australia, to operate alongside and complement the Aboriginal Visitors Scheme.

Recommendation No. 11 : In connection with better recognising risk factors for persons in custody, including Aboriginal persons the State Coroner made the following recommendation:

I recommend that the lock-up procedure manual be amended to make reference to the following in relation to the care of detainees:

Summary : The deceased was arrested on a number of Warrants of Commitment for unpaid fines and taken to the South Hedland Police Lock-up. She died less than 48 hours after being taken into custody. The provisions of The Coroner’s Act 1996 require the death of a person while in police custody be examined by way of inquest, and the supervision, treatment and care of the deceased while in custody be commented upon.

On 2 August 2014 the deceased was processed and detained in a cell at the lock-up. Later that evening the deceased complained of being unwell and was taken by police van to the Hedland Health Campus for assessment. The deceased was assessed and medical staff provided police with a signed fit to be held in custody form. The deceased returned to the police lock-up where she remained for the rest of the night.

On the following afternoon, 3 August 2014 the deceased again complained of being unwell and police transported her to the Hedland Health Campus for a second assessment. The deceased was seen and treated by medical staff and police were provided with a further fit to be held in police custody form.  The deceased returned to the lock up in the evening.

On the morning of 4 August 2014 the deceased was still complaining of being unwell. Police thought she was feigning her symptoms.  After midday police made the decision that the deceased required further medical assessment and arrangements were made to transport the deceased to the Hedland Health Campus.  Upon presentation at the Emergency Department medical staff became alert to the deceased’s serious medical condition and resuscitation attempts were made.  Despite their efforts the deceased could not be revived.

The State Coroner found that the deceased died on 4 August 2014 from staphylococcal septicaemia and pneumonia in a woman with osteomyelitis complicating a previous rib fracture and that death occurred by way of natural causes. The State Coroner was critical of a number of actions of clinicians and police officers.

Responses to the findings

Representing the 14 Family Violence Prevention Legal Services (FVPLSs) across Australia, the forum said the CCTV of Ms Dhu’s death “is a graphic representation of the consequences of lack of
appropriate services and poor police responses to Aboriginal and Torres Strait Islander victims of family violence.”
See the full statement

“Whilst Congress cautiously welcomes the recommendations from Coroner Fogliani, we strongly believe that the findings fall short and should recommend prosecution for those whose negligence and racism (whether unconscious or conscious) resulted in the death of a young Yamatji Nanda/Bunjima woman” Congress Co-Chair Dr Jackie Huggins stated.

“It is unacceptable that in 2016, our people die in custody because they are let down by both the health care system and the justice system. A simple dose of antibiotics could have prevented this tragedy. Congress echoes the Coroner’s call for the establishment of a Custody Notification Service (CNS) based on the successful NSW model”.

Congress Co-chair Rod Little added, “Congress is deeply saddened by this tragedy and stands in solidarity with the family and communities of Ms. Dhu. We will continue to advocate for accountability and a shift towards a preventative measures within the justice system. In addition to the full implementation of the recommendations put forth by the WA Coroner, we call on the judiciary and Governments to remember the 339 recommendations of the Royal Commission into Aboriginal Deaths in Custody”.

Ruth Barson, Director of Legal Advocacy, said that while the recommendations were welcome Ms Dhu should have never been subjected to the types of punitive laws that continue to exist in Western Australia.

“While the Coroner made strong and important findings that need to be implemented, this injustice can never be remedied. Ms Dhu should never have been in custody and she should have never been treated so cruelly. This case shows just how deep the failures in Western Australia’s criminal justice system are,” said Ms Barson.

This year is the 25th anniversary of the Royal Commission into Aboriginal Deaths in Custody. Western Australia continues to have the highest Aboriginal imprisonment rates in Australia.

“The Western Australian Government, and indeed all governments across Australia, have largely failed to follow the road map provided 25 years ago by the Royal Commission into Aboriginal Deaths in Custody both on how to prevent these types of tragic deaths and also, really importantly, how to reduce Aboriginal and Torres Strait Islander people’s over-imprisonment. It’s profoundly upsetting that this is a death in custody that was entirely avoidable,” said Ms Barson. 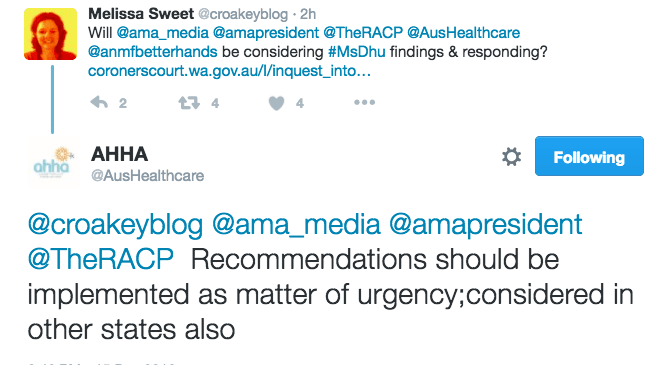 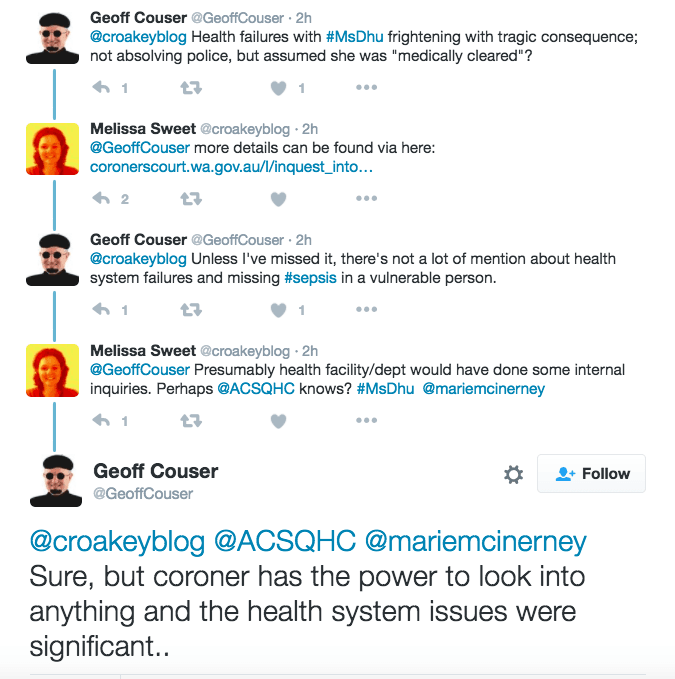