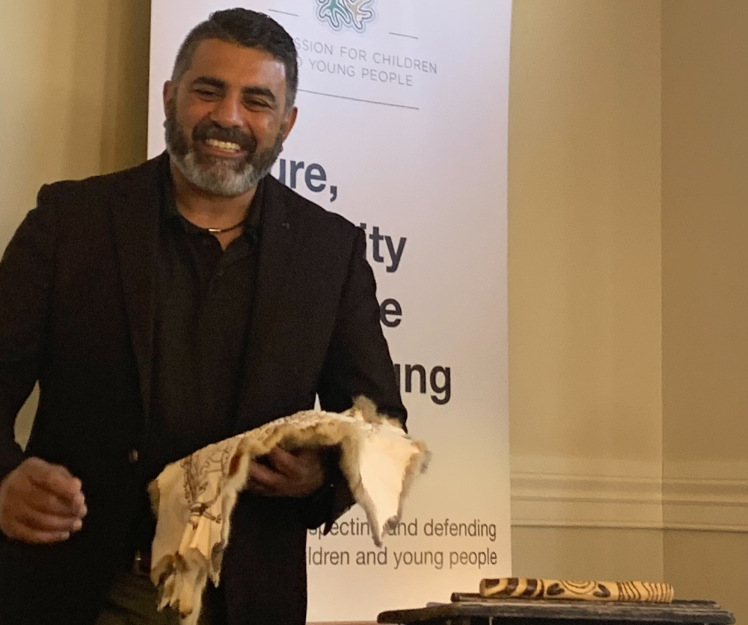 Image: Commission for Children and Young People, Victoria. See details in story below

Injustice risks health and wellbeing for Aboriginal children on remand

Introduction by Croakey: The ACT Labor-Greens government last week said it would prioritise raising the age of criminal responsibility to 14 in the next parliamentary term – the first jurisdiction to act on urging by justice and health advocates across Australia to change laws that currently allow children as young as 10 to be locked-up.

Earlier this year, as we reported at Croakey, Australia’s Attorneys General drew widespread condemnation for their failure to act on advice to raise the age — a decision the Public Health Association of Australia and others described as an example of racial discrimination, as it disproportionately harms Aboriginal and Torres Strait Islander children.

In the article below, Victoria’s Commissioner for Aboriginal Children and Young People, Justin Mohamed, writes that there are multiple challenges in the justice system to the mental and physical health of Aboriginal children and young people — not least the disturbing and growing use of remand in Victoria.

As NAIDOC Week 2020 celebrations get underway across Australia, he says that remand takes children from their culture, communities and families, and warns that it is an “unacceptable injustice” if any child is remanded not because of the inherent risk presented by their offending, but because of our inability to provide the supports they need to grow strong and succeed”.

Caption: Commissioner Mohamed is shown, in the feature image above, with a possum skin that will be made into a cloak featuring the stories of young people gathered through statewide youth justice consultations last year.

The cloak will be tabled in the Victorian Parliament with the Commission’s ‘Our youth, our way’ report in early 2021. Using traditional symbols, the cloak highlights resilience, connection to culture and the need for young people to be heard, feel protected and to move forward.

We thank the Commission for permission to use the photo.

If the warnings were not already clear enough, a recent report from the Sentencing Advisory Council Victoria further details the multiple system challenges to the mental and physical health of Aboriginal children and young people.

Released in late September, Children held on remand in Victoria charts not only a disturbing growth in the use of remand – more than doubling from 42 to 90 children in the eight years to June 2019 – it shows around 66 per cent of remanded children do not go on to receive a custodial sentence.

At the same time, Aboriginal children comprise 15 per cent of remanded children, but only 1 per cent of the broader population in Victoria, further compounding their stark over-representation in youth justice, and in the child protection and out-of-home care systems that previous work by the Council shows feed into what can be lifetime justice involvement.

Advocates talk with strong justification of diverting children from the justice system, and of raising the age of criminal responsibility to at least 14 years-of-age to reflect international human rights expectations. However, we might also talk about what Aboriginal children are diverted from when they are diverted into remand that sees them held in custody even when, in the strong majority of cases, their offending is later held not to justify a custodial sentence.

In the context of unacceptable under-performance in closing the gap in health outcomes for Aboriginal people, remand takes children from their culture, communities and families, diverting them from the supports we know vitally contribute to their wellbeing.

Strengthening these supports as an alternative to incarceration wherever possible is a compelling argument on any level – from the wellbeing of the children themselves, the broader safety of the community, and the economic cost of incarceration.

In contrast, diversion into the justice system, including through remand, removes children from these supports. We know from previous work of Victoria’s Commission for Children and Young People with the Victorian Equal Opportunity and Human Rights Commission that Victoria’s youth justice system remains a place where Aboriginal cultural connection is at risk.

We also know through the Commission’s Our youth, our way inquiry, which will be tabled in the Victorian Parliament early next year, that interventions to divert children to non-custodial options can have life-changing impacts.

Getting the services and agencies that matter around the table might seem like a simple thing, but its impact is undeniable, as time and again, through last year’s statewide consultations, I saw the profound difference it can make.

Remand constitutes one of the earliest points at which such interventions can be achieved, so the steps the Council proposes to reduce its unnecessary use must be heeded by the Victorian Government if we are to hope for better outcomes, and indeed for justice for Aboriginal children.

Key recommendations include establishing a fully resourced, Victoria-wide, 24-hour bail system specifically for children; expanding the specialised Children’s Court to headquarter courts across Victoria; and ensuring that specialist services and programs are designed both with and for Aboriginal and Torres Strait Islander children.

The Council’s report shows that 80 per cent of remand decisions are made outside of business hours, when it’s less likely children can be connected to the services that might instead keep them safely in the community – services including accommodation, mental health and drug and alcohol supports.

As the report notes, as well as their over-representation in youth justice, child protection and out-of-home care, children on remand in Victoria are over-represented among those with substance issues, who have been abused, or have mental health or cognitive functioning issues. We must not countenance a system that criminalises the concentration of disadvantage.

More broadly, it is an unacceptable injustice if any child is remanded not because of the inherent risk presented by their offending, but because of our inability to provide the supports they need to grow strong and succeed.

If we know that the supports that can divert children from youth justice remain wanting, we also know that youth justice detention is perhaps the last place we might choose as a setting for the services that can change a child’s life.

The uncertainty of remand, and the disruption of a crowded and pressured youth justice system render the provision of programs to children especially problematic. Violence and an over-reliance on lockdowns can compound past trauma at the same time as they undermine the rehabilitation that reduces re-offending.

The last thing we want is to amplify over-representation of Aboriginal children rather than tackling it, when we know that previously detained children are nearly four times more likely to receive a later custodial sentence – and while the over-representation of Aboriginal people continues into the adult justice system, where the unacceptable tragedy of Black deaths in custody remains an unresolved disgrace.

As we emerge from the COVID–19 pandemic, 2021 offers the promise of building a better society. It is also a year when Victoria will launch a new Aboriginal youth justice strategy, and develop new youth justice legislation.

It is vital that, together with the voices of Aboriginal people, we build the evidence from research into a better system that holds the future of too many Aboriginal children in its hands.