Dr Amy Coopes, who will cover the conference on 3 August for the Croakey Conference News Service, previews the #16nrhc discussions below.

A crisis in rural healthcare – driven by funding and training models that are no longer fit for purpose and driven to breaking point by a looming exodus of medical professionals amid the pressures of the COVID-19 pandemic – will take centre stage this week at the National Rural Health Conference in Brisbane.

The three-day event, which is convened by the National Rural Health Alliance, will be the first such meeting since early 2019 – with some 700 delegates expected to attend – and comes at a pivotal time for rural, regional and remote health.

Some seven million Australians, roughly one-third of the populace, live in rural and remote areas, and they experience higher rates of hospitalisation, injury and early mortality compared to their urban counterparts, according to the Australian Institute of Health and Welfare.

They are typically a younger population with lower levels of educational attainment and employment, poorer income and higher costs of living, and less frequent use of and access to GP services. This demographic is more likely to smoke, drink alcohol and suffer chronic conditions such as diabetes, arthritis and asthma.

The total burden of disease is 1.4 times higher in rural and remote areas than in metropolitan areas, the average life expectancy is reduced by up to three years and rural residents experience lower  rates of health screening.

Rural and remote areas have the lowest five-year survival rates for cancer, and the highest incidence of uterine, cervical, liver and head and neck cancers, as well as malignancies of unknown primary.

While spared the worst in the pandemic’s first few years by virtue of geographic isolation – with the exception of very remote areas, where the AIHW says a high proportion of residents were affected – rural and regional health services are now under significant strain.

The combined burdens of resignation and burnout, an influx of deferred and delayed treatment back into the health system, and resurgent Omicron, influenza and other infections as public health measures are rolled back, are all taking a toll.

Ramping, bed block, and staffing woes are being seen across Australia, but being felt more acutely outside of metropolitan centres, because many rural services were already underserviced long before the global outbreak of SARS-CoV-2, explained NRHA CEO Gabrielle O’Kane.

“All we are hearing now is much more about exhaustion, in the general sense,” said O’Kane. “It’s not necessarily even about the (COVID) numbers, it is just that there is not people to take up the slack.”

Compounding these pressures are the rolling impacts of climate crisis-driven fire and flooding disasters on Australia’s rural communities, who now increasingly find themselves on the frontlines of the climate crisis, and without adequate readiness or time to cover.

“How are we preparing for and responding to natural disasters?” O’Kane told Croakey in an interview. “How are we adapting to things like heat stress, smoke inhalation? What preparations are we making in the health system to deal with all of these things? And what can we do in terms of mitigation and health infrastructure?”

The climate emergency will be a key focus for the National Rural Health Conference, with an afternoon plenary on its second day featuring keynotes from Professor Mark Howden, who is director of the Institute for Climate, Energy and Disaster Solutions at the Australian National University, and Roland Sapsford, who is the new head of the Climate and Health Alliance.

Workforce issues, including what new Federal Health and Aged Care Minister Mark Butler recently described as a “crisis” in Australian primary care, will feature prominently, as will models of care, with the NRHA lobbying the new Albanese Labor government to fund a trial of its RACCHO initiative.

Rural Area Community Controlled Health Organisations, or RACCHOs, are inspired by and based on the world-leading and renowned ACCHO model in Aboriginal and Torres Strait Islander health and comprise “place-based health and wellbeing networks” owned and controlled by local communities.

“We know that the NACCHO model with wraparound services is a good one, and we know that it is supported by this block funding that allows them to be sustainable over time, and to remain flexible to local need, because no two towns are the same,” explained O’Kane.

Indigenous health, cultural safety, and innovative solutions in this space will be highlighted, with a much-anticipated keynote by high profile Wiradjuri and Kamilaroi journalist Stan Grant to kick off the summit’s second day.

Grant, who was recently appointed host of the ABC’s flagship Q and A program, delivered an acclaimed address on racism and health at this year’s annual congress of the Royal Australasian College of Psychiatrists. You can read our coverage here.

The Federal Government will hold a roundtable on Aboriginal and Torres Strait Islander health in September in Alice Springs, with a focus on workforce and social determinants including housing, justice, education and social services.

The need for urgent structural reform has been cast into sharp relief in recent weeks, with the Rural Doctors Association of Australia sounding the alarm on a mass exodus of overseas-trained doctors from rural areas following changes to the Distribution Priority Area (DPA) scheme.

Under these changes, large regional towns and outer metropolitan areas will now be considered priority areas for the purposes of recruiting doctors, alongside the more rural and remote zones already covered by the scheme. The DPA allows international medical graduates to work in Australia on the proviso they practise in a defined area of workforce shortage.

RDAA President Dr Megan Belot said the expansion of the DPA to include anywhere classified as Modified Monash Model 2 or above – a policy of the previous LNP government but waved through by the new ALP administration – would “wreak havoc in the bush”.

Though it “wasn’t a perfect system”, Belot said many rural and remote towns relied on the DPA to attract staff and “it did make a difference to the care of many rural patients”. Practices across the country were already reporting resignations and withdrawn job applications since the changes, which came into effect this month.

“We are already desperately short of rural doctors, and the DPA expansion will pull the rug out from under many rural medical practices,” said Belot.

Rural medical workforce concerns were also on the agenda of the AMA’s National Conference over the weekend. 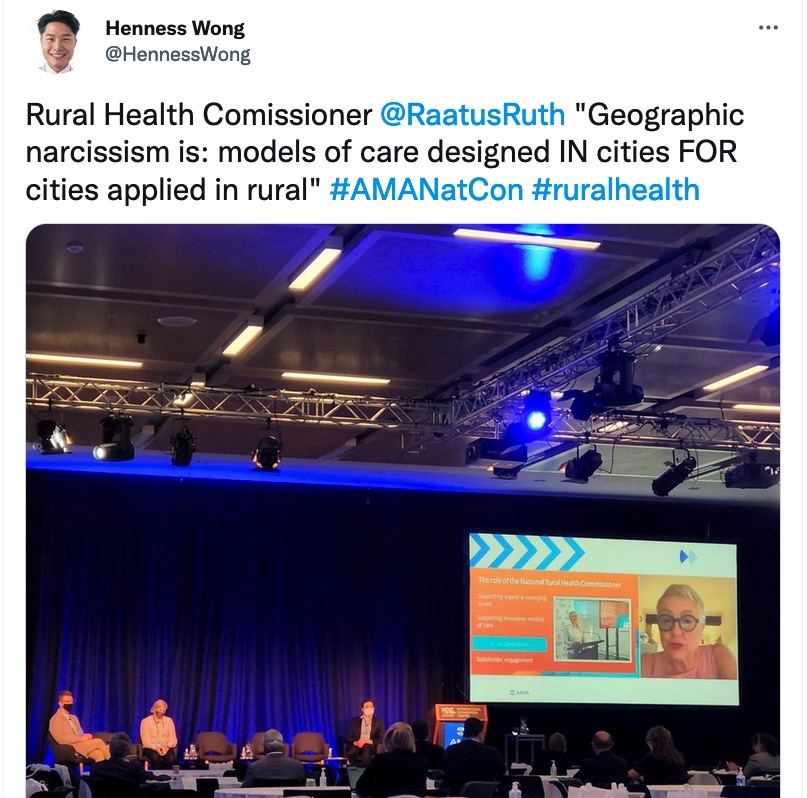 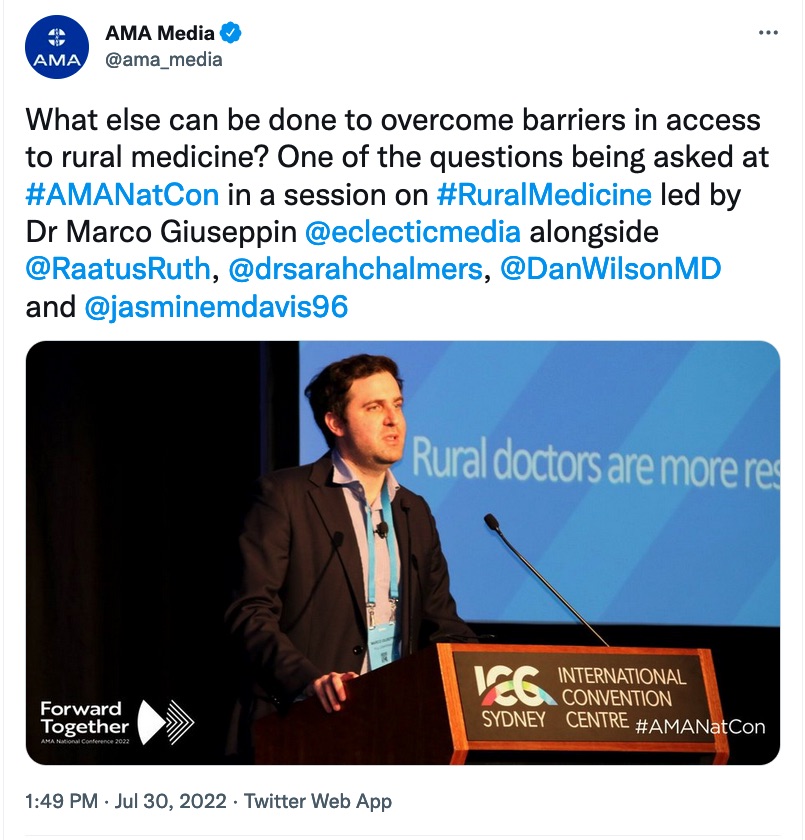 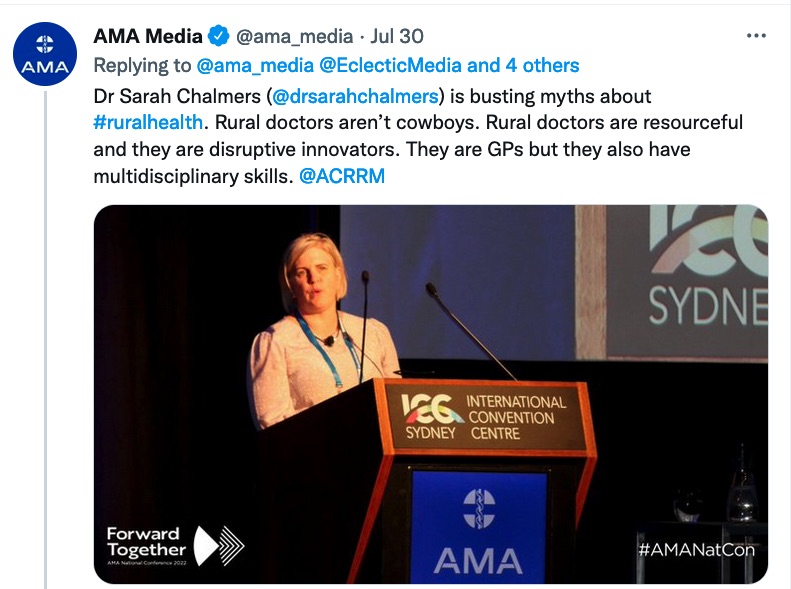 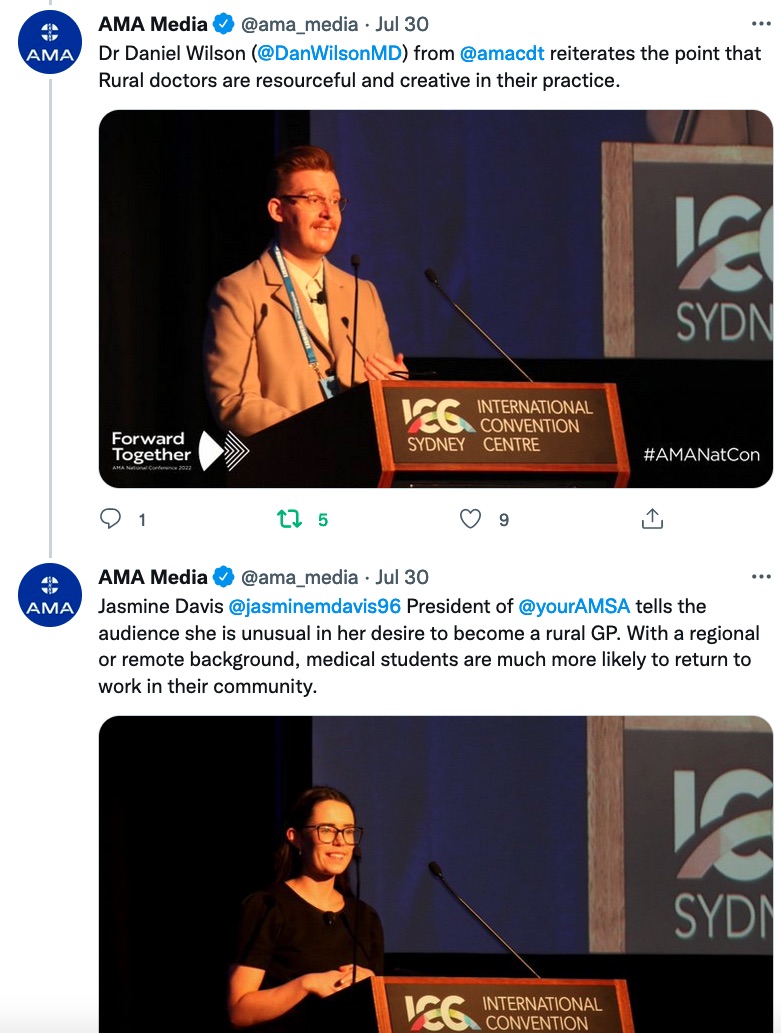 Townsville-based Dr Michael Clements, who is rural chair of the Royal Australian College of General Practitioners, said without additional incentives to draw or retain doctors remotely, or measures that made it easier for foreign medical graduates to get visas, rural practices would be forced to shut their doors.

“I certainly feel that unless we do something dramatic and new, we are going to see more rural practice closures, because people just won’t be able to recruit,” he said.

Belot agreed urgent action was needed to address the “immediate drain of doctors from the bush”, including expedited rollout of the National Rural Generalist Pathway and recognition of Rural Generalism as a discrete and essential medical specialty.

More broadly, Belot said there needed to be systemic reform to encourage, support, incentivise and train doctors to work rurally.

This was echoed by O’Kane, who said workforce remained a perennially wicked problem in rural health, driven to a large extent by metro-centric training models, and the chronic underfunding of the MBS.

“If you’ve gone from having 50 percent of your graduates that used to go on and do general practice to now 15 percent, what does that tell you straight away? You’re then having to look at a pool of 15 percent across the country, and you have got to get a portion of them to go rural. What are your chances?”

Instead of basing medical training in the cities, with short rotations to rural sites, O’Kane said training time should be mandated to at least 50:50, and there should be greater emphasis on drawing early career doctors away from metropolitan sites for their pre-vocational years.

Allowing junior doctors to carry over their pay and conditions including leave and loading from the hospital system into primary care – underwritten by block government funding – would also make a material difference to the recruitment of graduates into general practice. This needed to be accompanied by a rethink of the fee-for-service model rurally, she added.

“I think we just have to do a lot of this differently,” O’Kane said.

The Federal Government recently announced the appointment of a Strengthening Medicare Taskforce to address stresses on the hospital system, with priorities to include after-hours access to health care, affordability, and chronic disease management.

The NRHA conference, which is themed ‘Bridging social distance: rural health innovating & collaborating’, is pushing a focus on solutions, with delegates being asked to consider three key questions:

• Dr Amy Coopes will report on the National Rural Health Conference for the Croakey Conference News Service on 3 August. You can follow her on Twitter @coopesdetat, along with @CroakeyNews and @WePublicHealth, which will be curated this week by the NRHA from Brisbane. You can join the conversation on the hashtags #16nrhc #ruralhealthconf. Bookmark this link for our stories and follow the #16nrhc Twitter list. 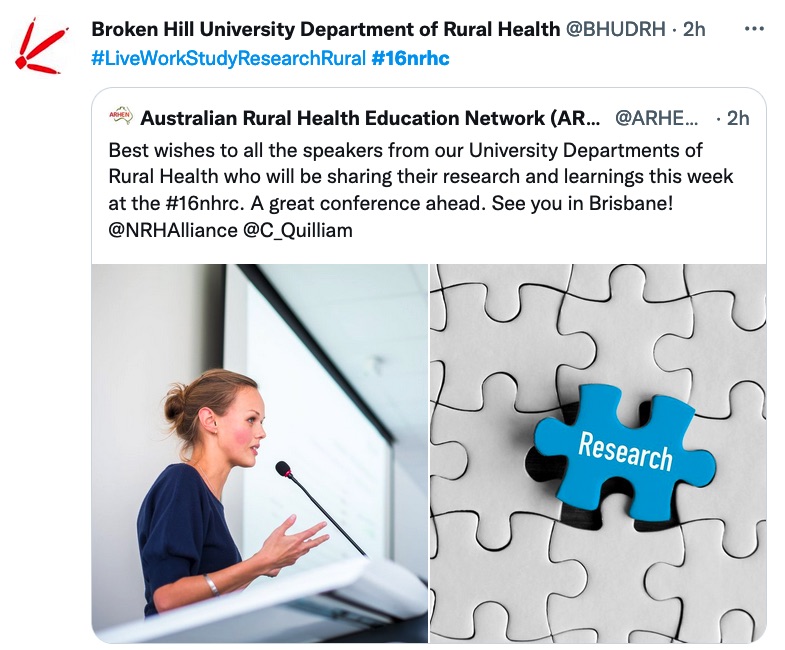 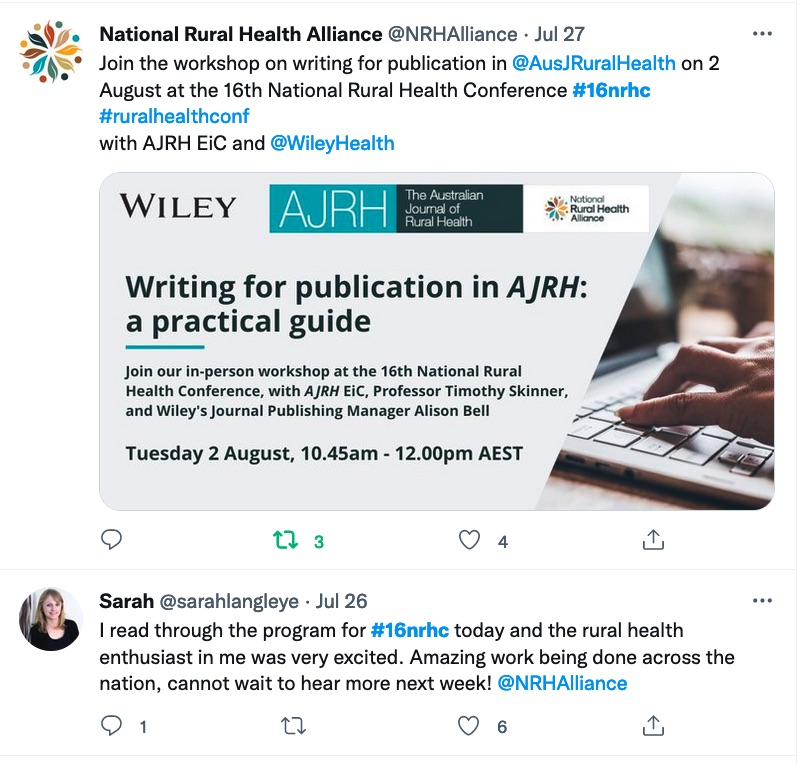 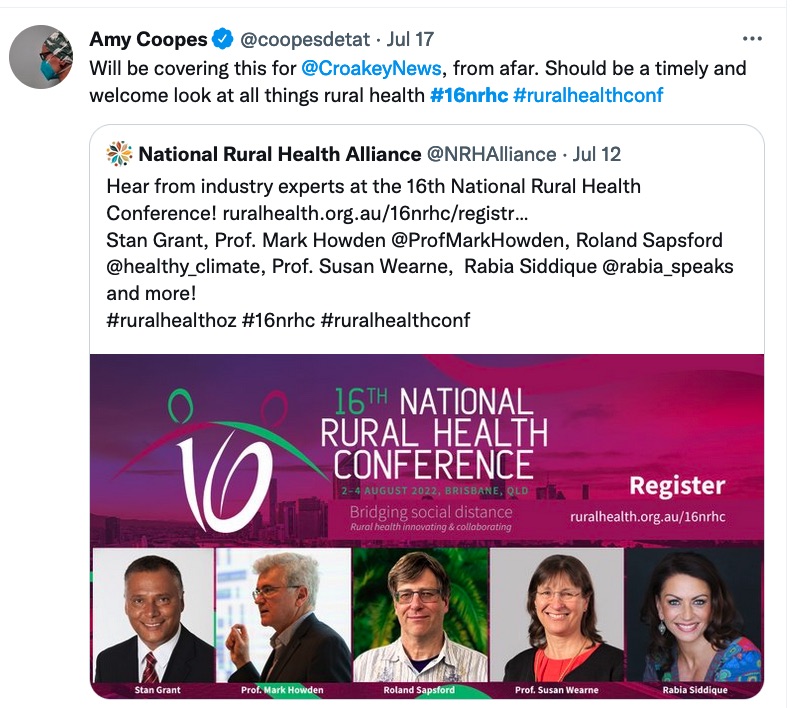 PrevPreviousWill 2022 be the year primary healthcare takes a step up?
NextDeveloping transformative visions for planetary health equity and healthier futuresNext