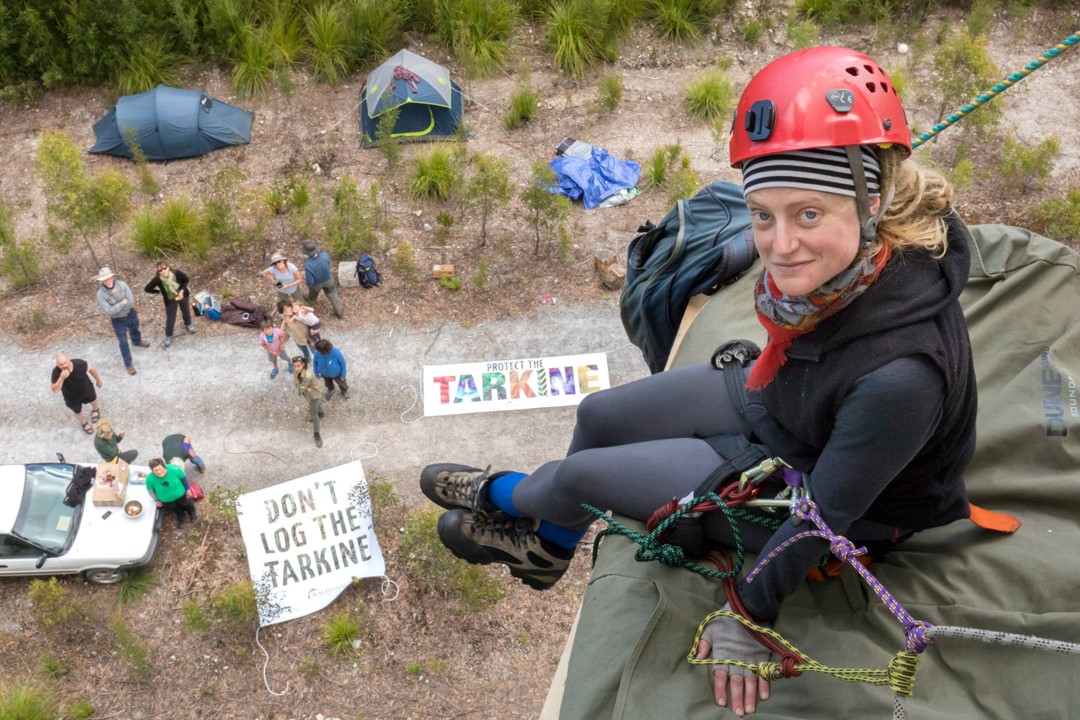 Inspiration from on high: the doctor who became a “serial tree-sitter”

Introduction by Croakey: With health groups describing the COP 25 climate talks as “a failure of leadership of historical proportions”, where can we turn for hope and inspiration?

In his recent address to the annual summit of Australian and New Zealand emergency doctors, former Greens leader Bob Brown urged a new era of defiance in the face of a worsening climate emergency, calling for mass demonstrations and direct action against mining and deforestation.

Searle, who also deploys on humanitarian missions with Médecins Sans Frontières, is one of four doctors among the 22 tree-sitters in the Sumac blockade, and Brown said the world would be “cataclysmically unsafe” without people like her.

In this piece for Croakey, Searle explains why she tree-sits.

I would love to say that I have always been an environmentalist; that even as a child I was aware of the threats to the natural world and wanted to protect them.

But for me, the realisation that our planet, all the species we share it with, and all the peoples of the world were in need of help came later in life.

The defining moment for me was a visit to the Upper Florentine valley in Southern Tasmania in 2007, where a group of passionate and committed individuals had been camped for a couple of years, blockading the road and defending the ancient forests.

I was awed and humbled that people would do such a thing, so selflessly putting their bodies and their lives on the line to stand up for the voiceless forests and species that could not speak for themselves.

I fell instantly in love; with these courageous people and with these forests, and I wanted to do the same, to do whatever I could to help protect the Upper Florentine and places like it.

I started spending more time there, making connections with people, learning to climb, and getting involved with various groups who were planning and executing regular actions and blockading ancient forests.

Now 12 years since that first visit to the Upper Florentine blockade, I was recently called a ‘serial tree-sitter’ by a prominent Tasmanian newspaper, a title I feel quite proud of. 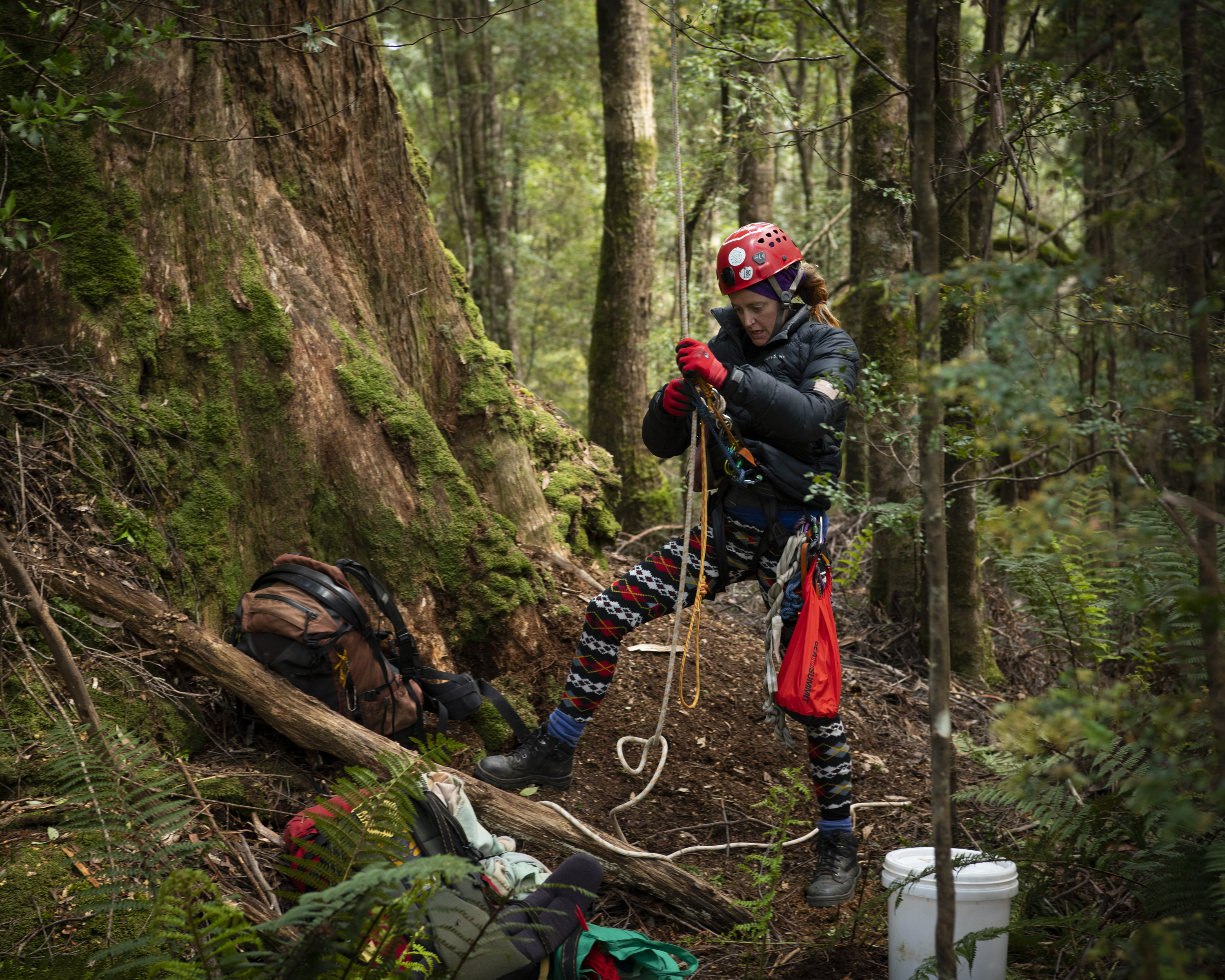 In the company of giants

I have spent countless nights in the canopy of tall trees in the Tasmanian wilderness. Always in threatened forests; always in trees that the forces of evil have earmarked for logging, sometimes going so far as to mark these trees with tape or spray paint to indicate that they will be the first to go.

The trees I climb are ancient; guardians of the forest; hundreds of years old. I imagine sometimes all the stories they could tell if they could speak. It is so powerful and humbling to spend days or weeks high up in these giants of the forest and to experience the forest around me.

I listen to the sounds of the forest and I imagine the screech of chainsaws and the roar of bulldozers echoing through the landscape and drowning out all other noise, as I have seen happen first-hand in so many forests that I have fallen in love with.

Each time I am in these threatened forests, I hope with all my heart that our presence will be enough and that we are strong enough to stop the machines coming in and destroying this place.

I am often asked how I can keep fighting and how I can stay positive having seen so much destruction, lost so many battles, been faced with so much hatred, and lost so many places that have been dear to my heart.

I definitely have moments of weakness; moments where I find myself standing in a new clear-fell, a place that was a thriving ecosystem last time I stood there and now has been reduced to piles of twisted and crushed wood left on the ground.

In these moments I look around and can’t believe that we are still stupid enough to be doing this and to think it’s OK. Tears fill my eyes and I feel unbelievably angry that this happened.

And in these moments, I focus my energy and channel my anger and resolve to do more next time, to fight harder, to make more noise, and to win the next battle.

There is nothing sustainable about logging native forests.

Climate change is one of the biggest threats humankind has ever faced; and we are on a path to destroying not only ourselves but also so many other species who we share this planet with.

Deforestation is one of the biggest driving forces behind climate change, and we have to stop cutting down trees. Now. Yesterday. The hour is already too late. Every hectare lost is another species pushed to the brink of extinction; an incremental increase in the planet’s temperature; and an ecosystem lost forever.

Part of a global battle

The fight for Tasmania’s forests is part of a global battle; one that we cannot afford to lose.

Civil disobedience is one of the most powerful strategies we can use in the fight to save these forests and the planet. In the absence of policy-makers who care and who are willing to act on this; direct action is the only way to stop the destruction.

We all have a responsibility to stand up for the voiceless. We cannot accept the ongoing destruction of the planet. Our lives and the lives of countless other species depend on the actions we take today.

The battle to end deforestation and slow climate change is at a crucial point right now and we have to act.

I believe that we can do this. I believe we have the power to change, to do what is right, to stand together and in support of the natural world, the forests, the Indigenous peoples, the non-human and human animals. 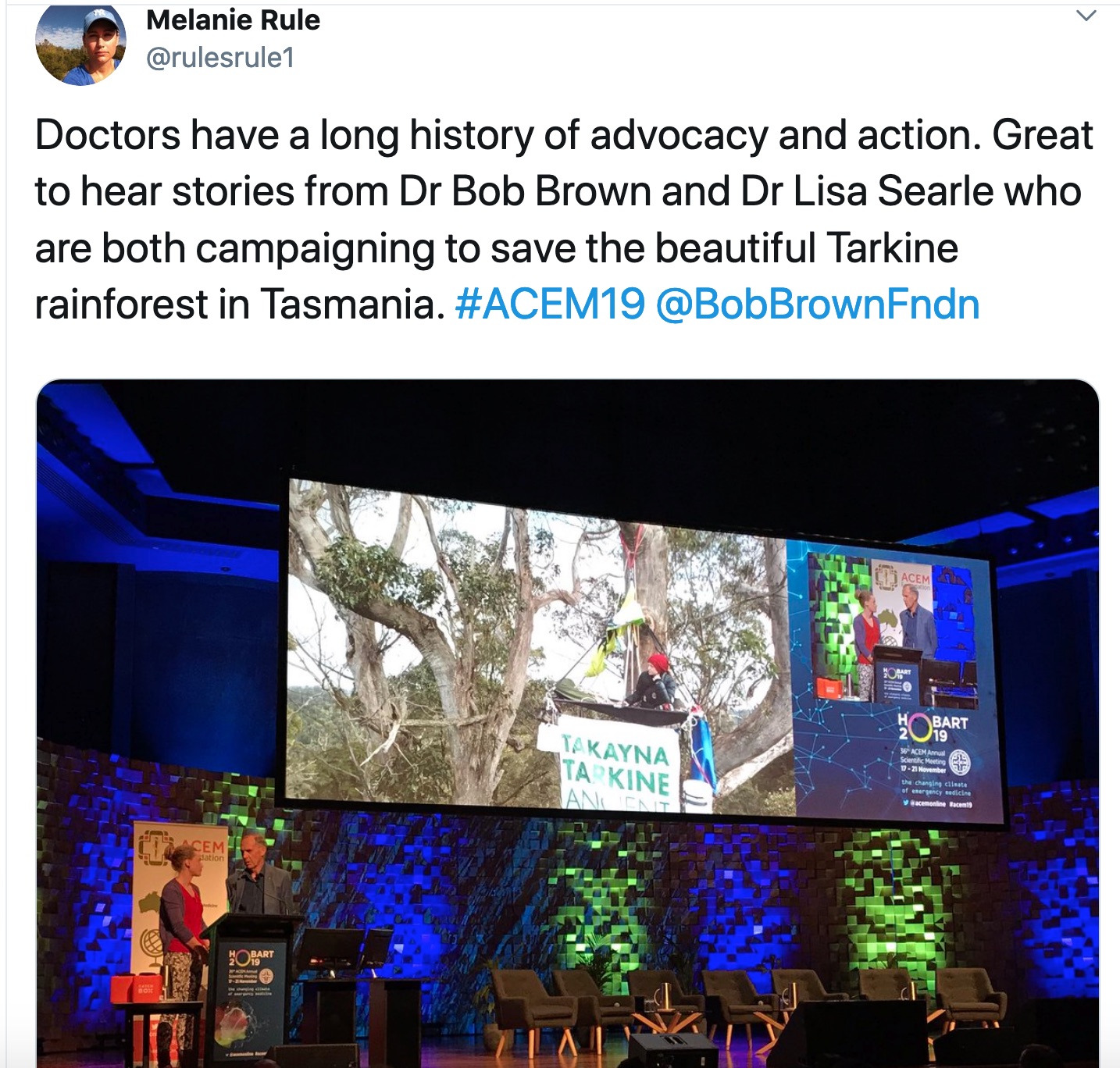 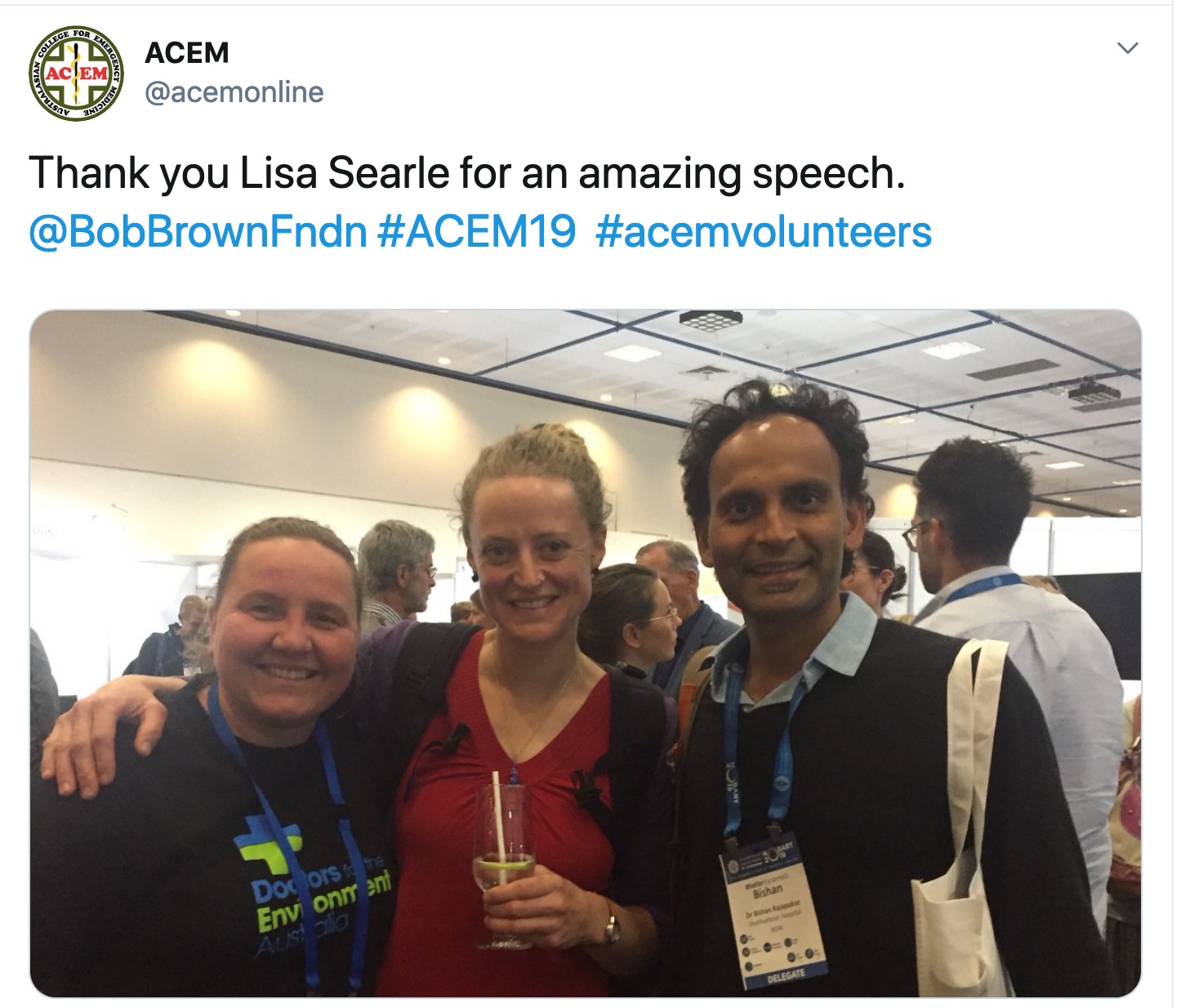 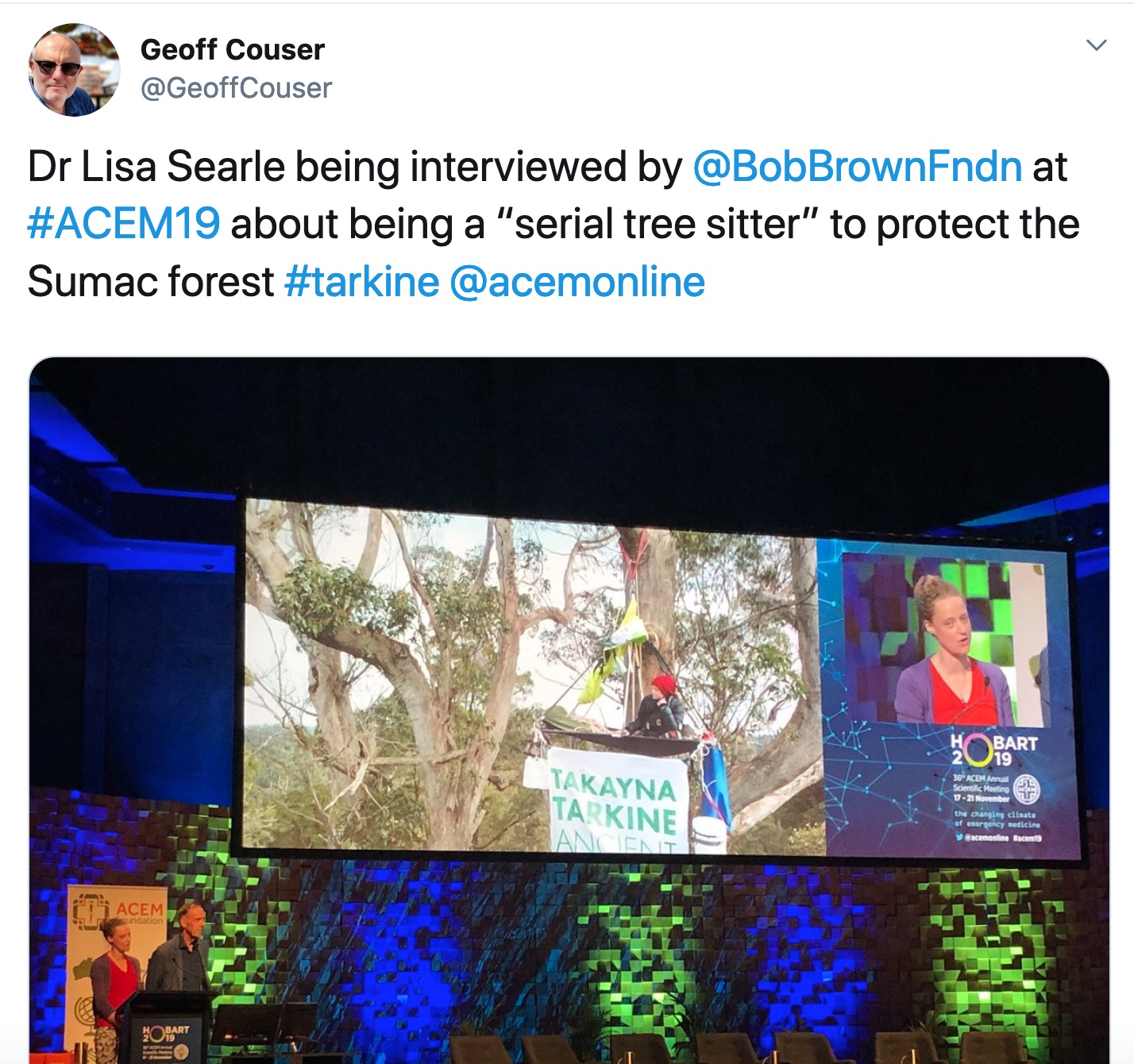