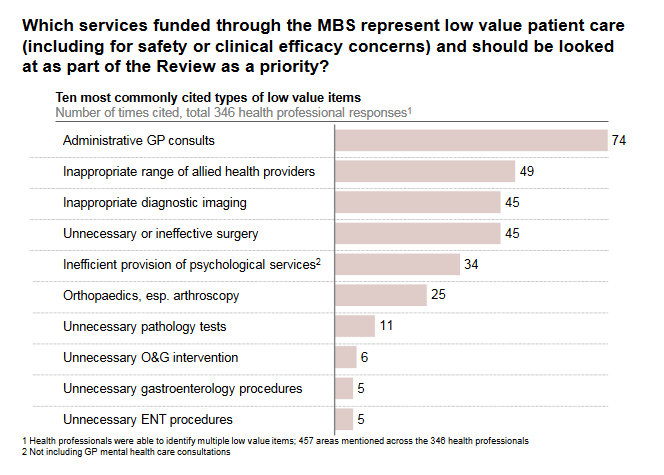 *Updated with further responses to the interim report*

Health Minister Sussan Ley has released the interim report of Medicare Benefits Schedule (MBS) Review Taskforce that is charged with reviewing more than 5,700 items for potential removal or rule changes.

The review is being led by Professor Bruce Robinson, former Dean of Sydney Medical School and chair of the National Health and Medical Research Council (NHMRC).

The major Taskforce recommendations for changes to individual MBS items will come later this year and next year, but the interim report describes the process of consultations, preliminary outcomes and some important discussions and caveats, not least around the potentially obsolete items identified so far.

It’s again raised concerns, particularly from the Australian Medical Association, that the process will be used as a cost cutting exercise (perhaps to fund the lifting of the GP rebate freeze) while the Federal Government continues to avoid looking at issues like private health insurance funding to find health care savings.

But the review continues to be strongly welcomed by organisations like the Consumer Health Forum, which says identification of ‘low value’ Medicare services should free up expenditure for use in areas of need, like Health Care Homes for chronic care. It maintains the review is “the most important, wide-ranging examination of Medicare since its establishment 32 years ago” although it is concerned there is insufficient consumer participation (see more from its statement at the bottom of the post).

For more on the context of the review, see this earlier article at Croakey on the tension around  both the government’s motivation (particularly in the wake of the successful ‘Mediscare’ campaign ahead of the July election) as it looks to cuts costs and self-interested political plays within the health sector that both risk blowing an important opportunity for meaningful reform.

Minister Ley said in a statement that the interim results supported the Government’s intention that the review was “not just about removing low-value or outdated items from the MBS altogether, but equally ensuring the rules around a common item’s usage reflected best clinical practice targeted at the appropriate patient cohorts”. She quoted the report’s finding:

“Reported ‘low-value services’ were very rarely inappropriate for all patient groups; more commonly the complaint concerned the provision of services in circumstances where for that particular type of patient the benefits did not outweigh the risk or costs.”

Nonetheless the public focus so far has been on the review’s identification of Medicare items being used for “low-value purposes” – particularly for repeat prescriptions and sick certificates.

As Sean Parnell writes in The Australian, the report has also highlighted unnecessary diagnostic imaging as a concern, and provided rare but politically juicy claims of misuse of Medicare rebates, including yoga classes billed as group therapy sessions.

Interestingly the interim report says that over half of the instances of reportedly unnecessary GP attendances related to mental healthcare, particularly to the review of a mental healthcare plan so that the patient could receive an additional four sessions with a psychologist. But it also noted that this also reflected the large proportion of consumers of mental health services who responded to the survey.

Chronic disease management items were also frequently cited as low-value services, though the report quoted one stakeholder as warning:

‘Yes, [there are] problems with these items but please don’t throw the baby out with bathwater. These items are critical to support team-based multi-disciplinary care. Re-engineer the items – don’t disregard them. 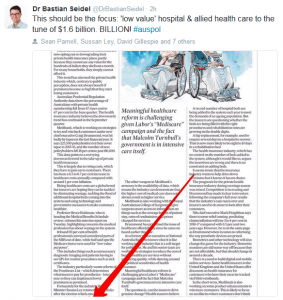 The president elect of the Royal Australian College of GPs Dr Bastian Seidel has supported freeing GPs of routine, time-wasting administrative tasks like sick certificates, though also pointed on Twitter to this article in the Australian Financial Review on calls from the private health insurance industry for reform of the Prostheses List, which says:

Insurers estimate that 20 to 30 per cent of total costs are “low value”. This includes things such as expensive interventions and knee arthroscopies. About 2-3 per cent of Medibank’s total customer base accounts for more than 30 per cent, or around $1.6 billion, of total claims.

Medibank says it will return every dollar of savings from reforming the Prostheses List, where the price varies significantly in public hospitals versus private. Medibank says this area alone costs the industry around $800 million and reform would lead to a 2 to 4 per cent reduction in premiums.

Pharmacists have been quick to say they are “ready to ease the burden on GPs‘, not only with providing sick certificates but with other routine services.

AMA President Dr Michael Gannon said there was no question that there’s a massive burden of red tape that falls on GPs, but he said each GP visit represents a health promotion opportunity.

When it comes to sickness certificates, there’s scope for many employers to say, ‘You don’t need a certificate for less than two days off work’. We know that nurses and pharmacists can sign plenty of those. But if you’re in a situation where you’re having your fourth run of sick days off in a winter, well there’s an opportunity there to look at your general health, to talk about preventative issues like vaccination, to really get to the bottom of why you might be getting sick so often.

And he warned against the review being simply a cost-cutting exercise, saying general practice is “simply not the problem”.

It represents only 6 per cent of the cost of the health system.

The Royal Australian  College of General Practitioners (RACGP) said the interim report “vastly overstates the waste and inefficiency in general practice and is yet another example of the Federal Government seemingly unfairly targeting GPs”.

See more from its statement below, and from the Rural Doctors Association of Australia which says a seemingly ‘low value’ consultation can be a lifesaving one.

Croakey hopes to publish analysis of the interim report in coming weeks, and further responses.

The Consumer Health Forum says the Medicare Review interim report underlines the need for reform of Medicare and for there to be strong input from consumers as well as health professionals. CEO Leanne Wells said:

“This review is the most important, wide-ranging examination of Medicare since its establishment 32 years ago.  The taskforce report released today makes the case for change clear if we are to have a public health insurance scheme that results in the provision of high value care to patients and meets contemporary realities, like the rise in chronic illness.”

“The Consumers Health Forum has urged the Government to review Medicare to ensure Australia is getting best value from the health services.  The identification by the review of ‘low value’ Medicare services should free up expenditure for use in areas of need, using new ways of paying for clinical care such as Health Care Homes provision of integrated care for those with chronic and complex conditions.

It said the CHF has been pleased to be engaged by the review to provide advice on the best way to engage consumers but is concerned there is currently inadequate input from consumers.

“Now that the review has commenced a rolling program of clinical committees to examine all Medicare items, there needs to be effective and systemic ways for consumers – those with most at stake – to provide meaningful input adding to those from clinician representatives.

“The evidence is strong that we get better health outcomes when patients and consumers are engaged in decisions about health services.  This goes beyond a single consumer representative on a committee to strategies such as those recommended by CHF, including:

“The report states that the potential value of MBS data and other information to consumers is ‘not being fully exploited’. Better access to data may assist consumers both in accessing care in the first instance, and also making decisions about their subsequent care. In particular, the Taskforce notes that there is support for improving information to patients about fees charged by healthcare providers,” Ms Wells said.

“We welcome the directions the review has said it will take in areas such as:

The Rural Doctors Association of Australia (RDAA) has warned the Federal Government that care must be taken with any reform of the Medicare Benefits Schedule (MBS) to ensure that doctors retain the ability to ee patients for whatever level of medical care they need, even if the initial reason for their consultation may be considered ‘low value’ or ‘routine in terms of MBS expenditure.

The Association has also urged that doctors must retain the ultimate ability under the MBS to decide if a consultation is required — rather than be constrained by a blanket requirement that ‘low value’ consults like providing sick certificates and repeat prescriptions only be undertaken by other health professionals. RDAA President, Dr Ewen McPhee said:

“While health policy-makers might argue that a so-called ‘low value’ or ‘routine’ consult – like getting a repeat prescription — is not something that the MBS should cover a doctor to provide , in reality this is often the only chance a doctor has to follow up on the overall health of a patient…and it can often show the need for more intensive medical investigations and essential medical care” .

“Additionally, a repeat script visit is often very important in its own right, as many drugs require medical monitoring and review.

“We should be questioning the very definition of ‘low value’ —a ‘low value’ consultation for one patient may end up being a life-saving consultation for another. Sometimes a routine consult provides an open door for a patient in discussing more pressing and complex medical issues or mental health issues —so to deny them the opportunity to see the doctor for this can lead to a serious gap in their care.

“Every consultation is an opportunity to provide immediate and/or preventative care — that’s the power of primary care, particularly in the bush.

McPhee said the RDAA was fully supportive of the MBS Review process, and agreed completely that funding through the MBS must be as cost-effective as possible but that it must be “a genuine process that considers quality outcomes for patients —not budget savings —to be the most important aim.”

“The Federal Government is running an inequitable campaign against general practice and GPs, which is not based on best evidence.” d.

“This is not a report about general practice waste, it’s about waste in the entire healthcare system, including unnecessary or low-value procedures delivered in hospitals, testing, healthcare variation, and other healthcare services – involving allied health professionals, nurses, general practitioners, and other specialists. In other words, everyone.”

Jones said the report uses very limited anecdotal evidence collected during the consultation and submission process and assumptions and conclusions are made without an independent evidence based assessment.

“Leaking highly selective topics to the general media only makes the whole debate problematic: every part of the health system can make cost efficiencies and we as GPs will take ownership and governance within our specialty: however inefficiencies in general practice pale into insignificance when compared to the rest of the health system: targeting general practice alone is totally illogical.”

“Can we do things better? Absolutely. But let’s stick to the facts, not the obvious exaggeration.”

GPs are the gatekeepers to cost-efficient health care and prevent the unnecessary escalation of care and coordinate patient management, at a fraction of the cost of hospital and other specialist services.

“The best way to combat waste is to have a regular GP who is across your healthcare, including the tests you’ve had, and the specialists you’ve seen.

“The best way to achieve improved efficiencies is to implement the Patient Centred Medical Home concept championed by the RACGP, supported by adequate funding and a swift end to the extended Medicare freeze.”

PrevPreviousHistory made with 45th Parliament as Linda Burney & Patrick Dodson share language, stories, trauma and hope
NextCall for submissions to AHPRA review on use of chaperones to protect patientsNext