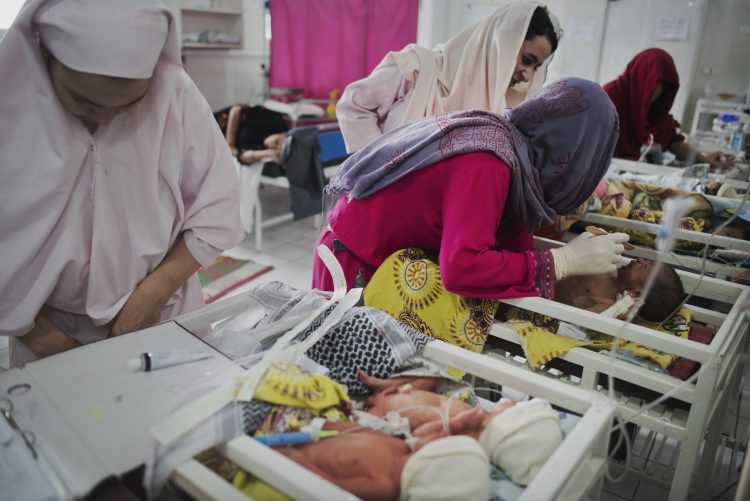 A newborn is examined by Pediatric Nurse Isabelle Arnould and midwives in the neonatal ward of the MSF Maternity Hospital in Khost, Afghanistan. 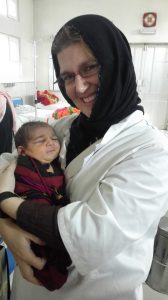 To help mark International Women’s Day 2017, Médecins Sans Frontières’ Dr Claire Fotheringham – who has long celebrated her May 8 birthday by attending IWD marches, including when they were still illegal in Queensland – describes her work as a consultant in obstetrics & gynaecology in Afghanistan, one of the most dangerous places in the world in which to give birth.

It’s a timely post: In one of his first steps, US President Trump reinstated the ‘global gag rule’, which bans US federal funding for any international health organisations or NGOs around the world that counsel women on family planning options that include access to safe abortion. Women’s and health groups warn it will reduce resources not just for reproductive health information, but access to birth control, sex education, and HIV testing.

In a short statement for Croakey, MSF Australia called on the Australian Government to “explore whatever means they can” to ensure that the known negative impacts of the global gag rule – which include more unwanted pregnancies, more unsafe abortions and death, and higher rates of sexually transmitted diseases, such as HIV – are mitigated.

Fairfax reported last week that Australia had turned up “empty handed” to a major international conference which has pledged more than a quarter of a billion of dollars for women affected by the rule, as part of the #SheDecides movement in response to Trump’s decision.

We thank MSF for providing the photos for this post. You can also watch a video below featuring an Afghan midwife, Aqila.

March 8 has always been a special day for my family and I – not only is it International Women’s Day (IWD), it’s also my birthday. My parents were activists and my mother always tells a story that one of the women who came to visit her the day after I was born had just been bailed out of the watch house for participating in an IWD march (at the time it was illegal to protest in Queensland).

Throughout my childhood it became tradition that we celebrated my birthday by attending IWD events. Perhaps that spirit of advocating on behalf of women influenced my career choice as an obstetrician, ensuring that women are able to give birth safely.

Why are Afghan women so much more likely to die during pregnancy and childbirth than women here is Australia?

During my field placement at Médecins Sans Frontières’ maternity hospital in Khost, Afghanistan, I met many women who shed some light on the complex answers to this question.

In Afghanistan, two out of every three deliveries occur at home, without any skilled birth attendant. In Khost we frequently saw women who had attempted to deliver at home before coming into the hospital with a complication, such as post-partum haemorrhage. I remember one woman who had delivered at home and then started bleeding profusely. She had been able to access a small amount of care at home, but because it was night time she was unable to travel safely to the hospital. By the time she arrived the next morning she was completely unresponsive, with a very weak pulse. And despite immediate medical attention she unfortunately passed away.

Many women now prefer to come to the hospital to deliver, but it can still be very difficult to access. They often have to travel long distances, and road travel can be extremely dangerous. There was a case not long before I arrived where a woman had delivered a baby and was travelling home when a roadside bomb went off, not targeting her, but she and her newborn baby were killed.

‘Too early, too late, too many and too close together’

In many parts of Afghanistan there’s very little availability of preventive healthcare and antenatal healthcare, so women and their carers don’t always understand the danger signs of pregnancy and when they should seek assistance. Another issue is that the women themselves are not usually the decision makers. So even if they think they need medical care, in the end that decision is usually made by their husband and mother-in-law. Plus, women may need a male caretaker to accompany them to hospital and to consent to any surgery or family planning method.

In obstetrics, we have a mantra for the risk factors for maternal deaths: ‘too early, too late, too many and too close together’. Sadly all these elements apply in Afghanistan.

Afghan women tend to get married and have children early in life, and because they are expected to have a lot of children, they often continue having babies into their 40s. Complications often occur at these two extremes of the age spectrum so our facilities see a lot of women having their first child, and a lot of women who are older, having their ninth or tenth child.

On top of that, women often don’t have the capacity to space out their births because they can’t access family planning, and because they are not in control of decisions around their fertility. Pregnancies that are too close together are risky for mother and baby because the woman’s body may not have time to recover – for instance to replace nutrients such as iron, calcium and folate – that are depleted during pregnancy.

Although the risks are unacceptably high for women giving birth in Afghanistan, we are still able to make an impact. 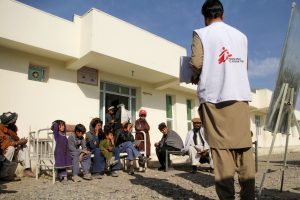 In places like Khost where there is such a huge need for maternal services, our presence is changing attitudes around where women give birth, and the importance of having a skilled birth attendant. During my placement we held a jirga, a meeting with community leaders, where we discussed the idea that to be an honourable man it’s important to bring your wife to hospital to ensure she has a safe delivery. In 2016 we strengthened our health promotion activities to improve recognition of complications throughout the community, including through radio messaging. We’ve also worked with private clinics to ensure that women with complications are swiftly referred to our hospital

In all our projects we emphasise teaching and training local doctors and midwives, which is incredibly important because international staff come and go but the local staff stay on. Historically, lack of education of women meant there were few female doctors and midwives to look after women in labour, however culturally many families only seek care from a woman. Training local female staff means that we’re leaving something positive behind. And as well as training within our facilities, we’ve also trained midwives in local health centres to improve care of normal deliveries.

Just the sheer numbers of babies we deliver in our four maternity services across Afghanistan makes a huge impact. In 2016, more than 66,000 babies were delivered by our teams in Afghanistan – that’s more than 180 babies every day.

In this MSF video, Afghan mother and midwife Aqila’, from Bamiyan Province, talks about the importance of education and of building a strong health workforce for women and children in her country. She says:

It’s not easy to for a girl to become a midwife, you know, if we see around Kabul it’s OK but we have a lot of provinces where the security is not good, the women are not allowed to go outside the home. It’s not easy to go to get an education as a midwife, in midwifery. But we need more midwives.

PrevPreviousHealth advocacy: for starters, don’t expect an hour with the Minister
NextCalls for greater transparency on specialists fees & on whether failure to do so should result in sanctionsNext