Introducing new column: “I am The Koori Woman and you will hear my truth” 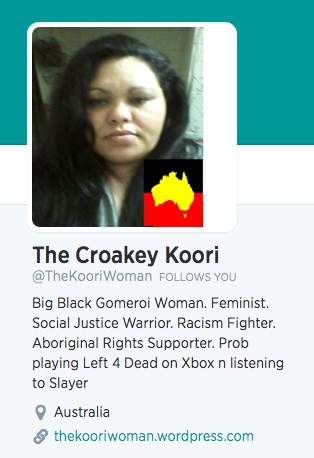 My name is Kelly Briggs. I tweet and blog under the moniker of The Koori Woman. My blog  recently won The Australian Writers Centres Commentary Blog of the Year.

I have been named one of the top 20 women shaking things up on Twitter, by the online publication The Shake and am a very active participant of the online IndigenousX movement.

This is the first of 7 guest columns I will be writing for Croakey Blog. To explain a little about what I will be writing about for Croakey, and how this amazing opportunity came to fruition, Melissa Sweet, who is the editor of Croakey, approached me and asked if I could write some articles from an Aboriginal woman’s viewpoint, on navigating health services from an Aboriginal perspective.

We put together a Start Some Good project, along with IndigenousX who have an excellent working relationship with the people behind the Start Some Good venture, and we raised enough money for me to write some columns and be paid for them via crowd sourced funding. Funding from people who are concerned about Aboriginal health, who want to know about how ‘Close the Gap’ has become ‘Widening the Gap’. Funding from people who care about the abominable health statistics this country has when it comes to its First People. I thank these people, who give me hope that this country is not sliding back to 1935.

Some might call it poetic justice, or others just a matter of timing, but after my crowd sourced funding had been approved, I began to face some health issues that at first seemed quite innocuous, then became increasingly worrying. Luckily they are benign, although surgeries will be carried out. I can now honestly speak about my brushes with the health system, and will do so at length at some point.

For readers to fully understand my health journey, I live rurally. This is a very important element to my narrative, as is the factor of my Aboriginality. I will be delving into this quite frequently in my later pieces.

A brief example is I was referred for an ultrasound. I called the only imaging clinic in town and was told the earliest appointment was almost four weeks away. No, I thought, that can’t be right. My heart was thumping so hard in my chest because I knew, deep down in my stomach I knew, there was something wrong and I could NOT wait four weeks.

I had to go back to my doctor and demand he get me an earlier appointment. Which he thankfully did. I can only imagine what people who live remotely must have to bear. Because in the days between being referred for a scan and undergoing the scan I was a shivering nervous wreck.

Initially I envisioned writing pieces tearing Abbott’s ignorance of the Closing the Gap initiative to shreds, going after the ridiculousness of the co payment and what this means to an average Aboriginal family, the media’s blind spot concerning Aboriginal youth suicide, Aboriginal suicide and the racism that still exists within the health system itself. After the last six weeks I have been through, I am wholeheartedly committed to doing just that.

In each column, I will write a piece that will shine a big fucking spot light on the state of this country’s health system from an Aboriginal consumer’s perspective.

I am not affiliated with any group, be it health, government or non-profit organisation. I am The Koori Woman and you will hear my truth.

© Kelly Briggs, 2014. This article is not available for republication without permission • To read more of Kelly’s work, see her blog.
FacebookTwitterLinkedINWhatsappPinterestEmail