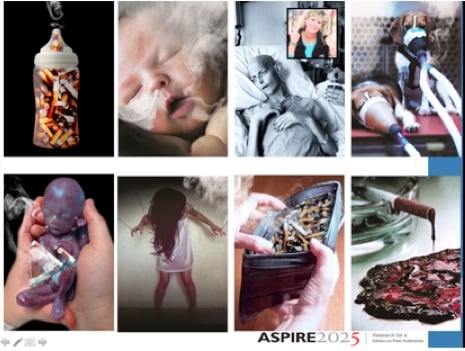 Do you think plain packaging of cigarettes with graphic photos showing tongue cancer or gangrene is enough to deter smokers?

What about filter tips that look like vomit, slime, scum or poo? Or a cigarette stick that marks the minutes of life lost as you suck on it?

And what about the images above? These were tested on young people as part of ASPIRE 2025, a research consortium comprising New Zealand’s leading tobacco control researchers working towards a smoke-free New Zealand by 2025.

“But we should always be looking to go beyond what has already been done,” she said.

Pacific Island tobacco control experts made a range of interesting presentations, including about a Cook Islands smoke-free household initiative that offered free immunisation and rat poison treatment for those who persisted. 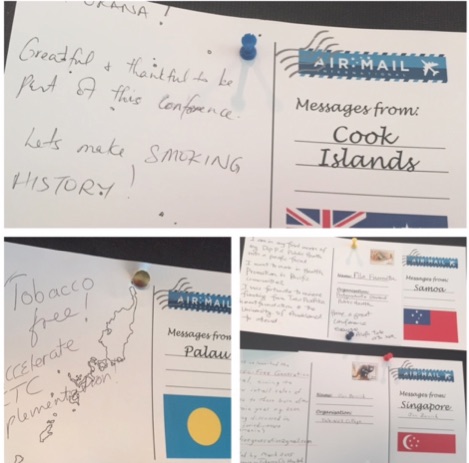 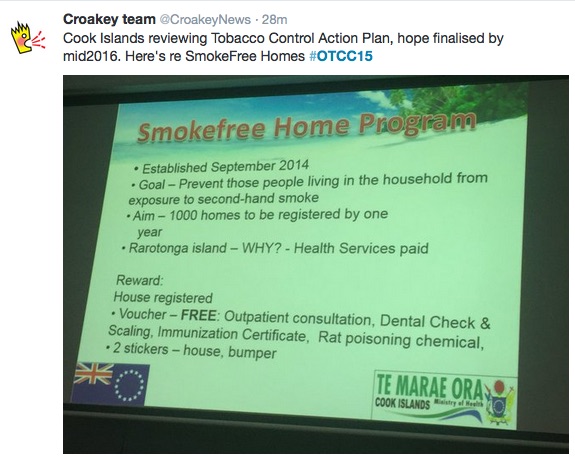 It would have been good to have a big picture plenary session looking at prevalence rates in each represented nation, and successes and challenges in their tobacco control efforts – particularly given the terrible overall prognosis outlined by Professor Alan Lopez and the reminder that developing nations are being targeted now by tobacco companies.

For many countries, there’s a bit of ‘watch and see’ what happens to the tobacco industry’s challenges to Australia’s plain packaging laws, as this Croakey interview with New Zealand Public Health Professor Richard Edwards canvases.

Or read this article by Edwards and Hoek calling for action on plain packaging.

The conference heard that some Sydney households have as many as 181 different tobacco retail outlets within under two kilometres, and that it’s as easy to buy cigarettes as bread, milk or postage stamps.

Kylie Kindoorff from Cancer Council Victoria asked what if we focused attention on supply as much as we have demand, and learned some lessons from France’s highly regulated (though also very anti tobacco control tobacco retailers.

Les buralistes must undergo mandatory training, can operate only one outlet, have to publicly report monthly sales figures and nominate minimum prices each month, she said.

In Australia, 5 out of 8 states have some form of retailer licensing but none with the explicit aim of reducing the number of retailers or controlling who can sell tobacco and where or when.

Conceding any action would not come overnight, she said it was time to start a dialogue with government and the community on the issue of supply, with suggestions like:

The move, researcher Katarzyna Bochynksa explained, was in response to changing media consumption, where many viewers now avoid the ad breaks in TV shows.

Viewers found the tobacco control storylines introduced to both programs quite engaging, she said, with high rates of viewers reporting that they had made them stop and think, felt motivated to quit smoking, and had taken quit related action as a consequence.

But she said there were challenges too, including limited control of the message and content, particularly as shows were produced by contracted production houses. The early sense was that “health lifestyle reality shows might be more effective sites for embedded content than drama”.

The advertisement talks about the long-term impact on family due to smoking related illness. See the full evaluation of the campaign.

• Thanks very much to the #OTCC15 organisers, particularly Lorena Chapman from Cancer Council Western Australia, and to the many presenters and speakers who helped with stories and interviews, particularly Marita Hefler from the Menzies School of Health Research.

Thanks also to those who contributed to the Twitter coverage. 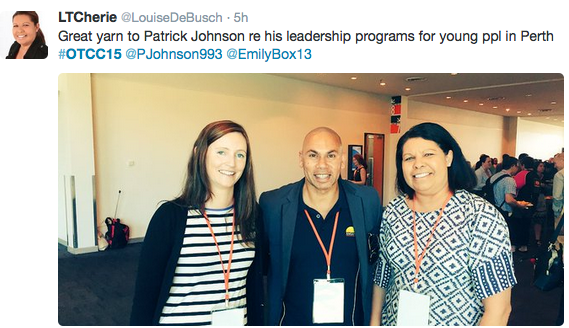 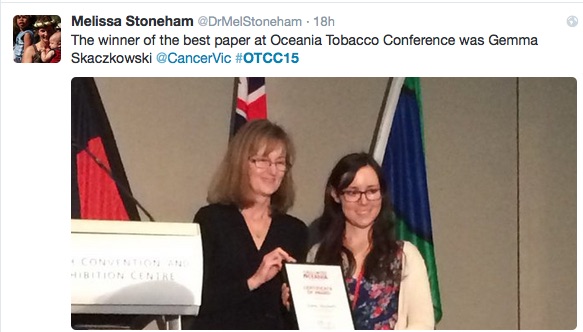 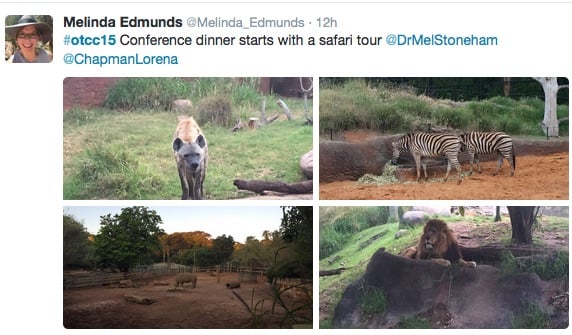 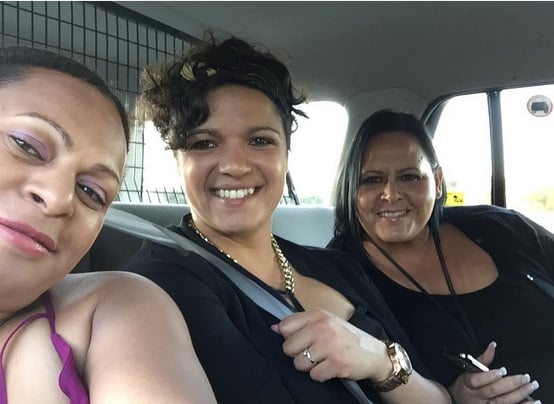 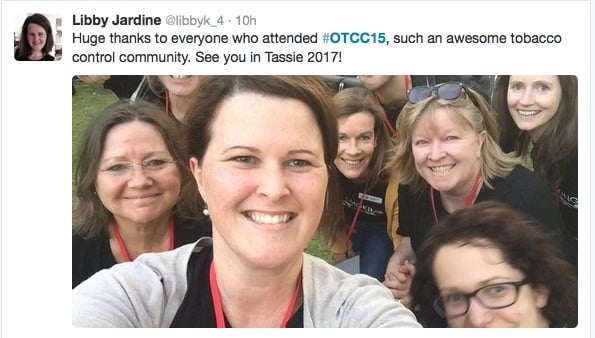 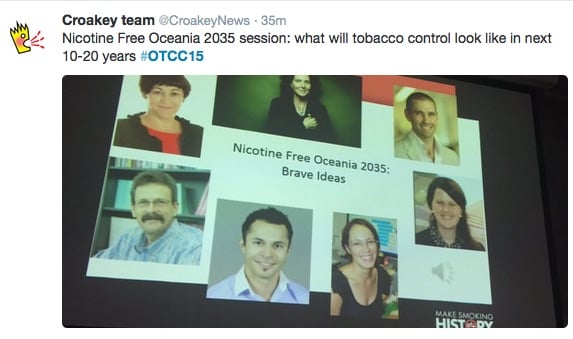 • The Twitter transcript for #OTCC15 is here, and the analytics from 12 Oct to 4 Nov are below, showing more than 11 million Twitter impressions and 578 participants. 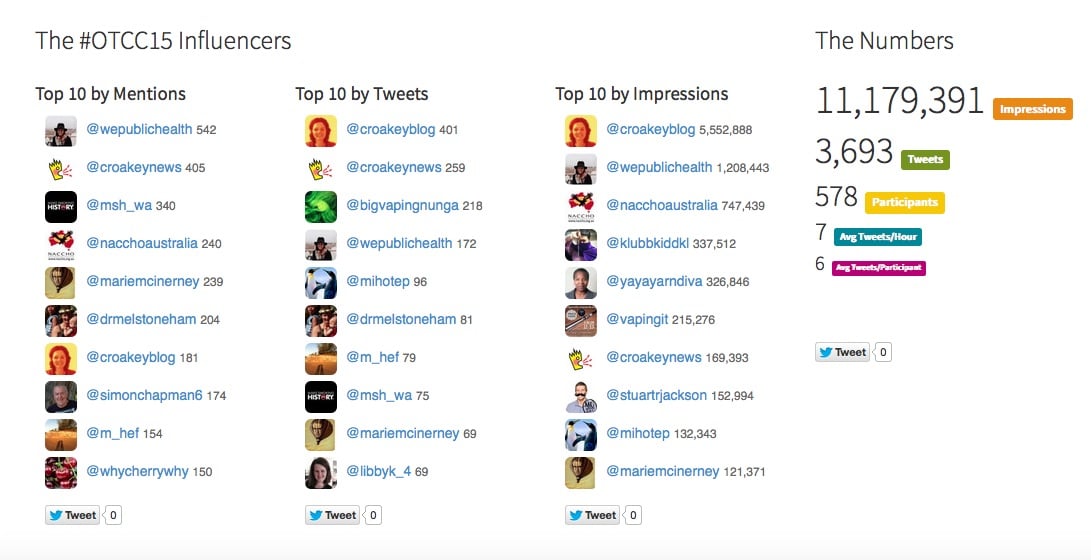