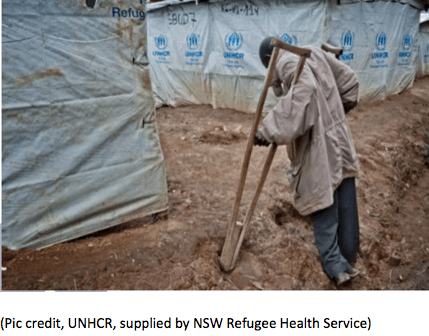 Investigating the unmet needs of children and refugees with disabilities

If life as an asylum seeker or refugee is hard, what can it be like for someone with a disability?

And what level of support can they expect or hope for in Australia?

Cathy Preston-Thomas from the New South Wales Refugee Health Service painted a graphic picture of the often grim intersection between displacement and disability at last week’s Population Health Congress in her presentation, ‘Wheelchairs at the arrival gate: working with people with a disability from a refugee background’.

It has been rare, since the Nazis, to see people persecuted because of a disability, but a disability can make someone an easier target, she said, referring to forced marches in history, including by the Khmer Rouge, where those who lagged behind were shot.

Exposure to war and conflict also makes people more susceptible to disability, including greater vulnerability to diseases like the recent outbreak of polio in Syria. The breakdown of services and medical supplies in conflict and flight from war-torn areas was also more keenly felt by people with disabilities, she said.

When people with disabilities enter refugee camps, they are often the last people to get food or medical care and the first to contract infectious diseases. There is little planning for their needs, including access to schools, medical supports and bathing and camp health services tend to focus more on lifesaving medicine and stopping the spread of disease than on long-term therapy, she said.

And their resettlement options are “chronically limited”, which is where Australia’s level of care and support comes in.

In fact, until recently, people with a serious disability and their families were screened-out of Australia’s resettlement program, until the Gillard Government lifted the health requirement in late 2012. In the meantime, some asylum seekers took measures into their own hands, including coming to Australia by boat.

At the end of 2014, Preston-Thomas said, there were 268 asylum seekers with disability living in Australian detention facilities, including 49 children: 114 were detained in our offshore facilities at Nauru or Manus Island, including five children.

According to the Immigration Department, their disabilities include hearing or vision impairment, multiple sclerosis, cognitive and developmental disabilities, and amputation. The numbers do not include people who are disabled by mental illness, she said.

Earlier this year disability organisations from across Australia called on the Government to release people living with a disability from onshore and offshore detention centres.

But services have also struggled to meet the needs of refugees with serious disabilities within the Australian community.

Preston-Thomas said the changes to disability screening in Australia’s resettlement program had seen about 50 refugees with disability arriving each year in New South Wales.

The majority are Iraqis who had fled to Syria and had now fled again, and they arrive with a range of disabilities, including Down syndrome, autism, cerebral palsy and catastrophic brain injury.

Almost all, she said, arrived with a carer (usually a parent or sibling), most had multiple disabilities and some had other members of their family also with disabilities.

Unlike those who arrive under the settlement program, asylum seekers living in the community on bridging visas or those refugees given temporary visas have limited support and are unlikely to be eligible for specialist disability services.

It has been, she said, a big challenge for support groups like the NSW Refugee Health Service, where few refugee specialists in health or settlement had experience working with people with a disability. “It was unchartered, complex territory using a language of social disability rather than medicine,” she said. 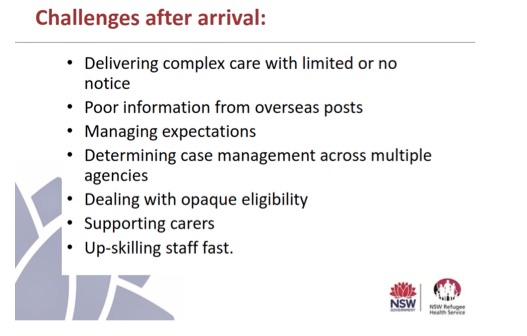 There were also few lessons from other states, she said, with very little Australian research that intersects both disability and refugee populations, and with international research largely focused on health care in countries of first asylum.

And the costs are high in not meeting needs: treatment is delayed, conditions can be exacerbated, and delays impact on the individual, services, and carers who face social isolation without support.

“The main issue was this group (of refugees) did not fit easily into the system,” she said. Disability services were not set up for people arriving out of the blue, such as needing to give assessments of adults with intellectual disabilities, and refugee services were not set up for addressing issues like access to schools for children with disabilities.

The National Disability Insurance Scheme is likely to shake up the policy context some more, but there are with lessons that can be learned from its implementation in trial areas, she said.

Diversitat’s report into the trial in Barwin suggested those clients with limited understanding of the disability sector will need a lot of support, amid concern that only 2 per cent of people given NDIS plans were from CALD backgrounds. “It does not bode well for a group that is already socially isolated,” she said.

But she said the NDIS does at least offer an opportunity to ensure that their needs are included in planning through CALD reference Groups, through champions at health and disability service organisations. “We need to continue to try to make health providers and planners aware of their needs.”

Other presentations also focused on disability issues – and were a welcomed inclusion to the program.

Kavanagh said children with borderline intellectual functioning – who may not traditionally have been considered to have a disability but may have troubles with learning across a range of domains – are often overlooked in research or policy.

She said her study, based on data on the Longitudinal Study of Australian Children, provides the first population-based prevalence estimates of school-based physical and social bullying in disabled and non-disabled children and between children with and without borderline intellectual functioning.

Another presentation from the Gender and Women’s Health Unit said there was international evidence that people with disabilities are more likely to experience interpersonal violence than people without disabilities, but that little is known about the situation in Australia.

Based on experiences reported from the age of 15 years, it found:

“This is a serious human rights and public health issue that requires urgent attention,” Kavanagh said.

Job quality for people with disabilities

The conference also heard there was growing policy interest in disability employment, particularly with the financial viability of the National Disability Insurance Scheme (NDIS) premised on it narrowing the employment gap between people with and without disability. That had prompted a study that looked at the quality of jobs on offer for people with disabilities as a potential influence on uptake.

It found that those working with any disability showed roughly 25 per cent higher odds of reporting one or more adversity at work – which was consistent across impairment types with the exception of intellectual/developmental disability.