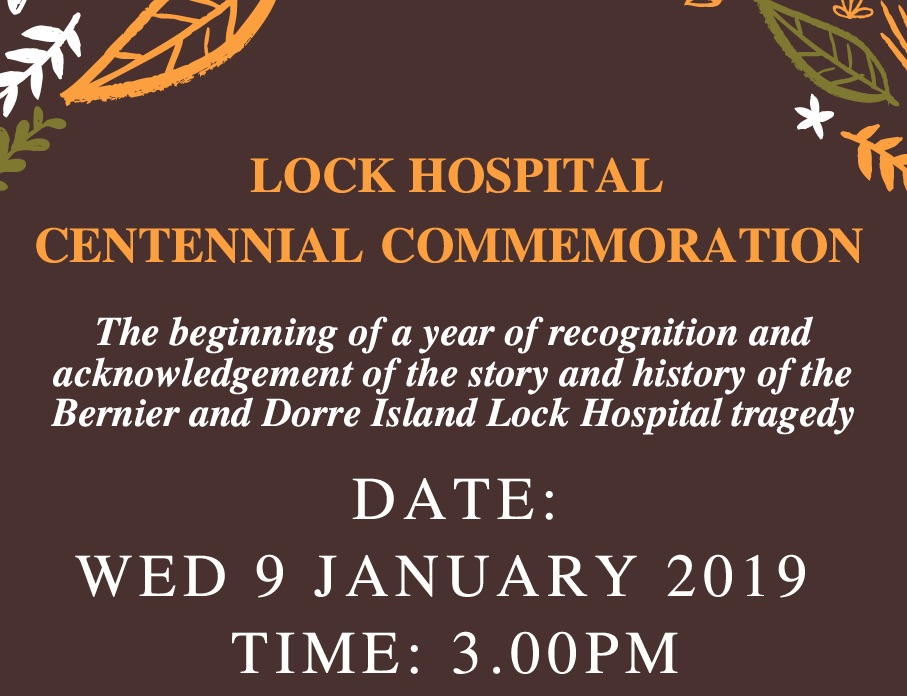 Invitation: Join a healing ceremony as part of #LockHospitals2019 year of acknowledgement

As foreshadowed in a recent article, Historical truth telling as a healing intervention: an invitation to the health sector to engage, members of the Croakey team will head to Carnarvon in Western Australia in January to participate in events acknowledging the traumatic history of the lock hospitals of Bernier and Dorre Islands.

We invite Croakey readers to join us; if you can’t be there in person, please follow at #LockHospitals2019 in the week of January 7.

The statement below is from the Lock Hospitals Working Group, auspiced by the Shire of Carnarvon.

Aboriginal people whose ancestors were subject to medical incarceration have invited the Australian community to join them in a healing ceremony in the Western Australian town of Carnarvon on 9 January 2019.

The ceremony will pay respects to the several hundred people who were taken from their families and Country across Western Australia, to be incarcerated in lock hospitals on remote Bernier and Dorre Islands, via Carnarvon, between 1908 and 1919.

On the day of the ceremony, the ninth of January, it will be 100 years to the day, since the last of those prisoner-patients were brought back to the mainland.

The history of the lock hospitals has not been widely told or acknowledged, and the ceremony will launch a year of activities in Carnarvon to ensure wider acknowledgement of this traumatic history.

Kathleen Musulin, a Malgana/Yawuru woman, whose great-grandmother was taken from the Broome area to the lock hospitals, said the ceremony would be an important milestone in enabling healing.

She said: “I’d love everybody to come to the memorial ceremony because it will unite us all in moving forward together.”

“Some of us don’t realise the trauma we carry with us. I’ve experienced it myself through this whole process because I’m hurting. I’m hurting for my great grandmother, and all of those other Aboriginal people who lived through that horrible time.”

Mr Bob Dorey, an Yinggarda/Malgana Elder, said it was vital the history was shared more widely, and he hoped the ceremony would mark the beginning of “healing time”.

“It is our story, it has to be told, of what our old people had to go through, which has been covered up for too long,” he said. “To start the healing without acknowledgement, there is no healing. The pain and trauma are still felt today.”

Dr Robin Barrington, a Badimia Yamatji woman from the Murchison region and lecturer at the Centre for Aboriginal Studies at Curtin University in Perth, said the lock hospitals were established under the WA government’s Aborigines Act 1905, which also gave licence for the forceful removal of Aboriginal children from their families, and the surveillance and detention of Aboriginal parents, grandparents and other family members on reserves.

“By the time the Aboriginal prisoner patients arrived at the port of Carnarvon they had already been transported, many in chains, hundreds, sometimes thousands of kilometres from their Country,” Dr Barrington said.

“They then faced a dangerous and torturous sea voyage of some 50 kilometres. Some women were pregnant and gave birth in exile on a strange isolated island away from their mother and aunties, many others were very old and in a very poor state of health.

“It was an inhumane government project intended to “cure” Aboriginal people suspected of having venereal disease, one that failed, and caused untold deaths and misery.”

The Shire of Carnarvon is also a strong supporter of the Project and participant in the Lock Hospital Working Group.  “This is a very sad history with much hurt and sorrow for the people at the time and the generations who have followed. It is time this is told, and the hurt acknowledged,” Shire President, Karl Brandenburg, said.

The ceremony will be attended by Aboriginal health leaders from across Australia, including a visiting delegation from Palm Island. On 10 January, a yarning circle will be held at 10am at the Carnarvon Library.

If you are unable to join the ceremony, you can participate via Twitter by following the hashtag #LockHospitals2019.

The Carnarvon group brings together community members, Shire Councillors and staff, and researchers with a shared purpose of ensuring proper acknowledgement and respect is paid to those ancestors and their families whose lives were upended by the traumatic policies of medical incarceration. Research has shown the lock hospital histories inflicted physical, mental, social, emotional, cultural and spiritual trauma across multiple generations, and has also documented the resilience, resistance and survival of Aboriginal people.

Acknowledgement: Healing from the history of medical incarceration of Aboriginal and Torres Strait Islander people

A story published this week by ABC: The ugly past…slowly revealed

Acknowledge the brutal history of Indigenous healthcare for healing

What do the newspapers really tell us about the lock hospital histories?

Walking for acknowledgement, healing and remembrance: #CroakeyGO in Carnarvon

This video was produced to support fundraising efforts.