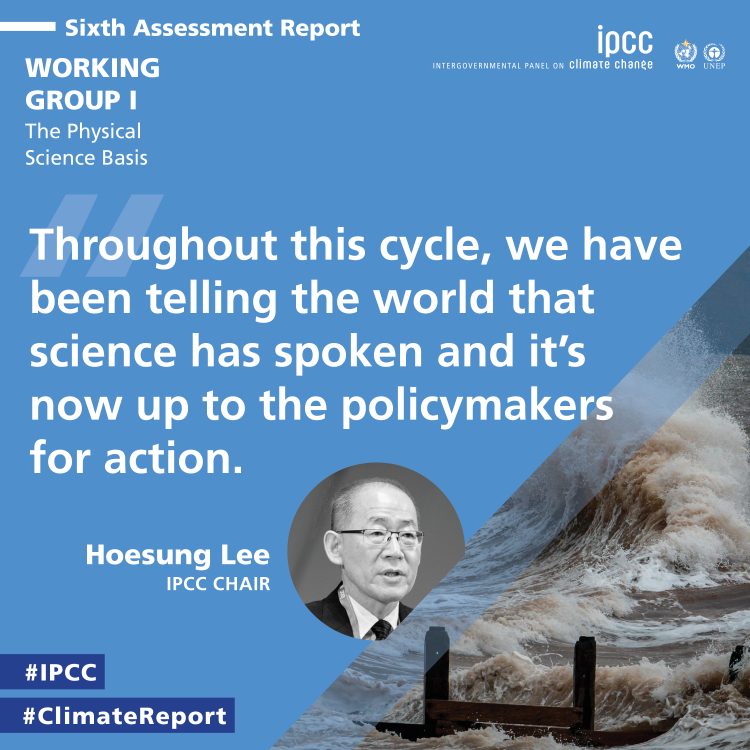 The Sixth Assessment report from the IPCC is a call to action ahead of November's COP26 climate talks in Glasgow. Source: IPCC

Introduction by Croakey: Australian doctors expressed alarm and frustration at the dire warnings of the latest global state-of-the-climate report issued by the Intergovernmental Panel on Climate Change, saying it must be the catalyst for dramatic action on fossil fuels in the mining-captive nation.

The first volume of the IPCC’s Sixth Assessment Report was published overnight, delivering a stark and irrefutable account of anthropogenic climate change that would accelerate beyond a catastrophic tipping point within the next decade without decisive and substantive consensus action on emissions.

UN Secretary-General Antonio Guterres said the report was a “code red” for humanity and “must sound a death knell for coal and fossil fuels, before they destroy our planet”.

Australia has consistently dragged its heels on climate action, reflecting the political power of the fossil fuels industry and the dominance of the Murdoch media.

Minister for Emissions Reduction Angus Taylor issued a token statement in response to the report, describing climate action as a “shared responsbility” in which Australia was playing its part, talking up achievements in solar and wind energy and refusing to commit to decarbonisation.

Protesters from Extinction Rebellion Australia took their message direct to Parliament House and the Prime Minister’s Canberra residence on Tuesday morning, spraying the message ‘CLIMATE DUTY OF CARE’ across their facades.

“We intentionally damage this building in retaliation against the government which causes intentional damage to our entire world, and to current and future generations,” said one of the protesters.

“We take responsibility for our actions and are willing to face the consequences, unlike our politicians who won’t even acknowledge they have a duty of care to the children of this country.”

WE DEMAND A DUTY OF CARE.

“We take responsibility for our actions and are willing to face the consequences, unlike our politicians who won’t even acknowledge they have a duty of care to the children of this country,” says grandmother rebel Lesley pic.twitter.com/MYww66tXaS

“Climate change is a health emergency and as we have seen with the COVID emergency, the best way to deal with it is to listen to the science and act on the evidence and advice of the experts.”

Khorshid said Australia’s doctors were “frustrated by the slow pace of the Australia Government’s response to climate change” and its reluctance to embrace climate science, which he said stood in stark contrast to its evidence-based approach to the pandemic.

He pointed to a host of recent and ongoing environmental disasters including extreme heat and fire emergencies in California and Greece, which he said were all too reminiscent of the unprecedented Australian bushfire crisis of 2019-20 which saw “tragic deaths, injuries, respiratory problems, increased stress and anxiety”.

“Heat exhaustion also leads to a range of health problems doctors are seeing increasingly frequently in their practices,” Khorshid said.

“Climate change is causing increases in extreme weather, which can lead to death, food insecurity, and mental ill-health. Floods like those we saw in Germany and Belgium just weeks ago also carry the risk of water-borne and infectious diseases.”

Climate change is affecting every region of the planet, but strong and sustained reductions in greenhouse gases can limit the damage in the decades ahead, with immediate benefits for air quality.

There’s no time left to lose. Further delays on driving down emissions will have a negative impact on the health of Australians.”

In this piece for Croakey, Dr Beau Frigault from Doctors for the Environment Australia echoes the AMA’s calls, arguing that Australia can and must lead the way on urgent climate reform.

It’s said that the road to progress is often a long and winding one, filled with many small advances instead of big leaps. This has certainly proven true about our understanding of climate change and our global response to address it.

The Intergovernmental Panel on Climate Change (IPCC) has for decades been instrumental in providing the most current, authoritative  and factual evidence to guide decision makers in addressing the climate crisis.

Their latest report, released this week, provides an update from the 2013 iteration.

The report details what many of us had been expecting: the earth is still warming at an accelerated rate, resulting in more severe and frequent weather events, and is showing signs of potentially irreversible ecosystem damage.

This trend will continue unless significant action is taken.

The message from the IPCC, authored by 234 of the world’s leading scientists who evaluated 14,000 climate change research papers, is clear:

The associated bushfire smoke alone was responsible for 417 unexpected deaths, 1,124 hospitalisations for cardiovascular problems and 2,027 for respiratory problems, as well as 1,305 presentations to emergency departments with asthma.

As doctors, we see the lethal impacts in surgeries and hospitals – directly through extreme events such as heatwaves, floods, bushfires, and indirectly via worsening air quality, changes in the patterns of infectious diseases, threats to food and water supplies, and effects on mental health.

Those health impacts affect all of us, but our children, pregnant women, those with chronic illnesses, outdoor workers, and First Nations peoples are most at risk.

Australia is one of the most vulnerable nations in the world to climate change, yet our federal and state governments do not reflect this in their policies.

Furthermore, Australia has been ranked last for climate action out of nearly 200 countries in a UN report assessing progress towards global sustainable development goals.

Australia is tone-deaf to the global push for action on climate change and risks being left behind.

Rising to the challenge

While the Federal Government set a weak emissions reduction target of 26-28 percent below 2005 levels by 2030 six years ago, and has been refusing to increase this, other countries have set new targets to address the need.

The United States has almost doubled its 2030 commitment to at least 50 percent reduction by 2030. Canada, a major fossil fuel exporter like Australia, has increased a 30 percent commitment to 40- 45 percent cut by 2030.

Nonetheless, there is still time for Australia to rise to the occasion. The solution is simple – we must reduce our emissions drastically this decade. This means no new coal, gas and oil and a plan for an orderly transition to renewables, while ensuring workers and communities dependent on the fossil fuel sector are supported into new, secure jobs and are not left behind.

If any country can achieve this, it is Australia. With our ample sun and wind, we can reduce climate pollution.

Every fraction of a degree of warming we can mitigate by changing our actions now can literally save lives. A shift to renewables would also boost the economy, grow jobs, and provide cheaper electricity.

We just have to demand that our Government steps up. No more waiting Australia. The time is now.

PrevPreviousThe Health Wrap: from the arts to the Olympics, some deep diving
NextTorres Strait Islanders face more than their fair share of health impacts from climate changeNext