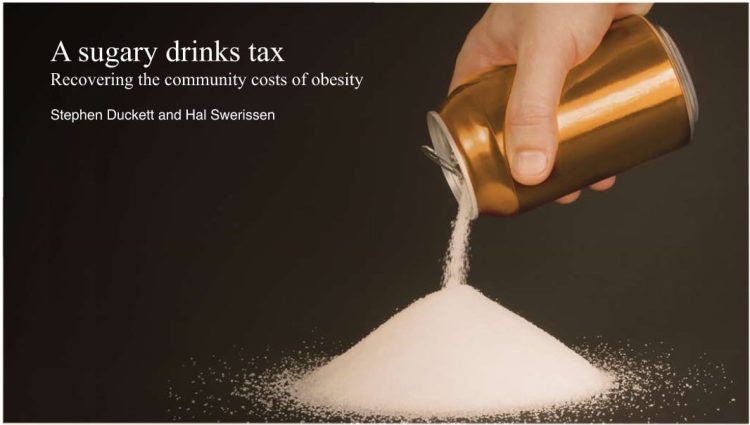 Is a tax on sugary drinks “bonkers”?

A new report recommending a tax on sugary drinks drew fire from a fairly predictable range of critics. In the article below, the report’s authors, Professor Hal Swerissen and Professor Stephen Duckett from the Grattan Institute, address some of the criticisms.

We recently launched a report: A sugary drinks tax: recovering the community costs of obesity, arguing that there should be a 40 cent per 100 grams of sugar excise tax on sugary drinks.

The report has drawn comment from those who are opposed to government intervention to recover the third party costs caused by sugary drinks, including the Deputy Prime Minister.

Are we ‘bonkers’, as Barnaby Joyce suggests? Should people who want to stay slim or lose weight just ‘push back from the table’ and exercise self control? If government tries to suggest what we should and shouldn’t eat won’t we just end up living in a nanny state being told what we can and can’t do?

Nick Cater from the Menzies Research Centre and Henry Ergas, in The Australian, have put the case for taking individual responsibility for your weight and keeping government out of personal decisions about what we eat.

To justify their position they have suggested obesity doesn’t cause health problems, that consumption of sugary drinks has decreased and hasn’t caused obesity, that we have double counted the costs of obesity, that there is little support internationally for a tax on sugary drinks and that introducing a tax won’t reduce obesity.

Are they right or wrong?

Let’s have a look at the evidence in our report. First it’s clear from a range of experimental and prospective cohort studies (where people are followed over time) that being overweight or obese results in a higher rate of diabetes, cancer, cardiovascular disease, asthma, musculoskeletal disease and gall bladder disease.

Overall, as our report points out about 5.5 percent of the total burden of disease from all causes is attributable to being overweight or obese. So, wrong on the first count.

Second, by international standards Australia consumes a lot of soft drink per person. About 87 litres per year on average.

Although there has been some decline more recently, this is a still a dramatic increase for both adults and children since the late 1960s when we consumed about half that amount. We now get 4 per cent of our total calories from these drinks. So, wrong on the second count.

Third, as we say in our report, a range of factors cause obesity. Sugary drinks are part but not all of the picture. They contribute about 10 per cent of the problem. This is significant, and the important point is that these drinks have little nutritional value. So, misrepresented on the third count.

Fourth, we estimate that obesity costs the community $5.3 billion each year. About $500 million of this is attributable to soft drinks.

We used standard costing methodologies and did not, as Ergas claims, double count by adding the marginal excess burden to raise the tax. People could easily switch to non sugary drinks and we estimate that about 15 percent will do so in our costings.

We point out that no tax is perfect and that some non obese people will pay more for sugary drinks if they don’t swap to other drinks, but overall there is a net benefit to the community. So, wrong on the fourth count.

Fifth, it is not just the World Health Organization arguing for sugary drinks taxes. There is in fact strong support internationally. As our report points out, a range of countries and regions have now introduced these taxes. So, wrong on the fifth count.

Sixth, we accept that the evidence on the impact of sugary drinks taxes on obesity rates is still limited. But there is evidence that it reduces consumption and we estimate a decline of about 2 per cent in obesity if the tax is introduced. So, misrepresented on the sixth count.

While setting the record straight on these criticisms is important, the real issue is: when is it ever reasonable for government to constrain our personal behaviour through initiatives like a sugar tax?

Essentially, commentators like Cater and Ergas are ideologically committed to reducing the role of government as far as possible. For them, it’s up to individuals whether or not they make bad decisions. If that leads to health risks and inequality so be it. These risks are worth the price of their freedom and autonomy. They accept that others should not have to bear the costs for bad decisions, but they would argue, that if there are third party costs (e.g. higher health costs), individuals, not government, should pay these themselves (e.g. through higher health insurance).

In practice, the community has accepted that markets sometimes fail, some goods and services are more efficiently provided by government and government has a major role in reducing inequalities in access to basic goods like health, education, housing and income. The alternative is a loss of social solidarity.

Similarly, we accept that consumers do not always have the skills, knowledge and capacity to make fully informed decisions. This is particularly true for children.

When there are significant risks to our wellbeing, governments regulate and influence our decisions and the behaviour of service providers and producers to make sure we stay safe and don’t significantly harm our wellbeing.

Government also regulates our actions to protect other people from the costs of our behaviour. We still have choices about what we will do, but within an environment that we can reasonably expect to be relatively safe and harm free.

Governments can and sometimes do over reach and constrain our choices unreasonably where risks to social solidarity and harm are small. Whether or not we intervene should be based on an assessment and a discussion of the evidence and the risks. Interventions should also be proportional to the risks. For example, coercion should only be used when the risks of harm to wellbeing and social solidarity are great.

We have taken the trouble to debate the criticism of our report because the evidence is that currently there are significant harms and costs associated with the consumption of sugary drinks, both to those who are obese and the community more generally.

The sugar tax we propose is a proportional response to these costs. It recovers about the same amount as the contribution sugary drinks make to the costs of obesity. It provides a clear signal to producers and consumers for reformulating products and swapping consumption to non sugary drinks.

Ideally, obesity will reduce, but even if it did not, it is reasonable for government to make sure that the price of sugary drinks properly reflects the costs to the community by introducing a sugary drinks tax.