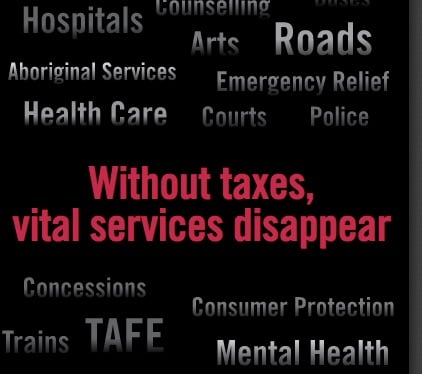 Is it time for a new public health campaign? Paying tax is good for our health

Paying tax is good for us; it contributes to a healthier society and healthier people.

If that doesn’t sound much like any catchy slogan that you’ve heard lately, then it’s well past time such a public health campaign was mounted.

With the recent federal budget highlighting taxation policy as a “new” battleground for public health, it’s timely to examine the health implications of moving further away from a progressive taxation system.

In the article below, health equity advocates Professors Fran Baum and Sharon Friel urge the public health community to see advocacy for tax as an important aspect of their work.

“For the future we need a strong concerted campaign from a coalition of non-government organisations concerned with health and welfare to argue for a progressive taxation system that enables our governments to invest in those activities that evidence tells us will promote health,” they say.

Much of the debate stemming from Scott Morrison’s budget has focused on the tax system and how much tax different people and organisations pay. The Government has flagged it plans to install a flat tax rate. That would eventually see a worker earning $41,000 paying the same tax rate as someone earning $200,000. The government has also proposed to reduce company tax rate from 30 percent to 25 percent.

On the face of it, cutting taxes seems sensible. Who wants to pay more tax? But, thinking a little more deeply about this, we see how it will have at least three significant negative effects on the welfare of society, including public health.

Income inequality is a health concern

Income inequality matters for health. It creates barriers of status between people and reduces trust, self-worth, sympathy and community within societies, which give rise to social exclusion, insecurity, stress and can lead to decreased life expectancy (see – Berkman and Kawachi, Marmot, Wilkinson and Pickett, Friel and Denniss).

In their book, The Spirit Level, Wilkinson and Pickett show levels of health and social indicators in high income countries are more closely related to income inequality than income levels per se.

A fair and healthy taxation system should be progressive so that people on a higher income pay a higher percentage of their income than those lower down the scale.

It is noteworthy that, in Australia under the conservative Menzies Government in the 1950s, the marginal tax rate on the top incomes was kept at 66 percent for six years and then at 60 percent for the rest of its term in government.

Since that time this rate has been reduced by successive governments (Labor and Liberal). Taxes as a percentage of GDP have been declining in Australia since 2000 and our current political leaders on both sides of politics seem determined to keep it that way.

Second, the issue of taxation and equity has implications for the whole community. As we learnt with the release of the Panama papers, corporate tax evasion and avoidance has become a major issue.

Estimates suggest that Tax havens deprive the EU of the equivalent of a fifth of the corporate tax revenue it currently collects. In 2014 Australia was estimated to have lost $4.8 billion from the tax avoidance activities of 15 large companies.

The 2014 G20 meeting in Sydney included on its agenda ways of instituting measures to ensure corporations pay their fair share of taxes.

The French economist Thomas Piketty, who pointed out the extent to which inequities were growing internationally, argues that a progressive global tax on capital coupled with a very high level of international financial transparency is required “to avoid an endless inegalitarian spiral and to control the worrisome dynamics of global capital concentration”.

The third negative effect is that reduced taxes mean less government revenue and scope for investment in all the public good assets that make up a flourishing and healthy society.

This point was well-recognised some time ago when Rob Moodie, former Chief Executive of VicHealth, noted in relation to paying his local rates:

I really appreciate paying my rates. This may sound a little odd but not when you consider the huge demands and responsibilities of local councils. Whether it’s parklands, street lighting, planning for new buildings, community festivals or strengthening links between different groups in the community, all these elements impact on our health and well-being and they are all the responsibility of councils.”

The same case can be made for paying national taxes. Frank Crean, Treasurer in the Whitlam Government, was fond of paraphrasing the American jurist Oliver Wendell Holmes: ‘With taxes we buy civilisation’.

An important part of keeping Australia healthy is ensuring that we have sufficient public revenue from taxes that we are able to ensure that the social determinants of health are working for as many people as possible.

This means the public health community needs to see advocacy for tax as an important aspects of its work.

The path has been already been forged by the SA Council of Social Services (SACOSS) who ran a campaign in the 2014 State election with the slogan Without taxes, vital services disappear.

The campaign highlighted the problem of South Australia’s declining tax base and falling revenues. SACOSS saw this affecting the ability of governments (of any persuasion) to fund the infrastructure, policies and programs that are needed to support socially disadvantaged people. They argued that unless a fair and sustainable revenue base was secured services would continue to be cut.

For the future we need a strong concerted campaign from a coalition of non-government organisations concerned with health and welfare to argue for a progressive taxation system that enables our governments to invest in those activities that evidence tells us will promote health.

These activities include education across the life cycle, health services including disease prevention and promotion, public transport infrastructures, opportunities for meaningful employment and a strong social security system to protect people in times of need.

• Fran Baum AO is a Matthew Flinders Distinguished Professor of Public Health and Director of the Southgate Institute of Health, Society and Equity at Flinders University.
On Twitter: @baumfran

• Sharon Friel is Director, School of Regulation and Global Governance (RegNet) at ANU and Professor of Health Equity.
On Twitter: @SharonFrielOz