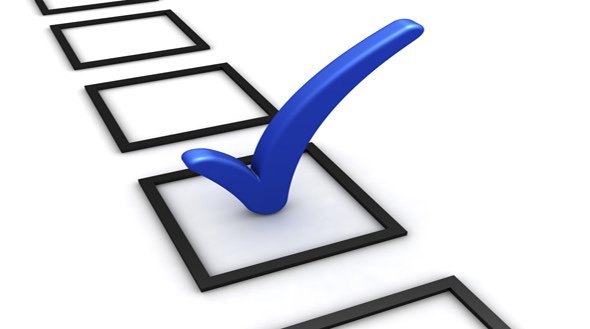 Is it time for a plebiscite on abortion in Australia?

The result of an Irish referendum held last weekend, which provided overwhelming support for liberalising the country’s abortion laws, has given Australians something to think about.

The laws here vary from state to state, and political ambivalence gives licence to an ongoing situation of uncertain access, high costs and harassment of women attending abortion clinics.

In the post below, Associate Professor Suzanne Belton, Chairperson of Family Planning Welfare Association NT asks if we shouldn’t take a leaf from Ireland’s book and put the case for nationally consistent, humane legislation to the general population.

Ireland has voted by referendum to repeal the 1983 Eighth Amendment in constitutional law which prohibited access to safe, legal abortions. It is now apparent that two out of three Irish people believe that abortion should be safe and legally accessible part of health care.

The landslide majority means that the Irish government has a mandate to make appropriate legislation recognising women’s human rights, and that Irish women can stop traveling to the UK for their abortions or obtaining medications in the post without suitable local health care supports.

In Australia women’s human rights remain incompletely recognised. In parts of Australia access to safe and legal abortion is terribly difficult and women travel to end their pregnancies. Australian women cross state borders to receive the care they need. They are often alone and are made to feel ashamed. In parts of Australia women are harassed and intimidated by people who are anti-abortion and believe that they have a God given right to interfere in women’s wombs. In most of Australia no data is collected to help understand the health system need for abortion services, and women pay large out-of-pocket fees that are not covered by private health insurance or Medicare. In parts of Australia the laws regulating access to abortion are so old they predate women’s right to vote.  Are we the Irish of the antipodes?

What would happen if we offered a ballot to Australians? What if we asked men and women to repeal all legislation in every jurisdiction that criminalises and inhibits access to abortion care? What if we asked for support to provide real access to public health services? Tasmania and Northern Territory recently reformed legislation due to grass roots campaigns. New South Wales is in the reform process now as is Queensland – and South Australian law needs a make-over too. There is a lot of work to be done, yet politicians find it so very difficult to do anything.

Australians have mixed feelings about referenda. They rarely succeed. However, tedious, painful and expensive the national survey on gay marriage was, it demonstrated that direct democracy works. People made an effort to vote and overwhelmingly sent a message to Canberra to get on with reforming marriage law in favour of same sex couples. For those conservative politicians who for reasons of ideology, fear or bigotry would not act to represent the will of the majority of Australians, the plebiscite sent a clear political message.

The results of the votes in Ireland show that most young people support legal access to abortion. Young men and women are directly affected by state control of their fertility preferences. In Ireland this resulted in the untimely death of Savita Halappanavar, a 31 year old woman who died from the complications of her miscarriage and the reluctance of health staff to provide a therapeutic abortion.

As fertility decreases and the direct impact of an unwanted pregnancy becomes theoretical as it is for older people and men, the support of reform wanes. There is less skin in the game. This is also likely true in Australia. 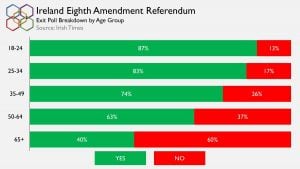 Australian abortion laws are made at the state level, not the federal level of government.  There is nothing in our constitution about abortion or the right to life. We have a jumble of laws that confuse patients and scare health care providers. We have a lack of policy directive and robust data with ridiculous waiting lists in public hospitals and an over reliance on privatised health care. Perhaps a ‘Yes’ vote would spur a response from leaders responsible to deliver law, policy and services to Australian taxpayers.

A politician and advocate for reform, Ms Corcoran Kennedy, was quoted in an article reporting the voting patterns in the Irish times , saying she believed the large majority indicated in the poll should ensure legislation is passed quickly.

“The fact that it looks like the result is so resounding means that those who chose to filibuster, chose to delay legislation, chose to behave irresponsibly and recklessly in the chamber, will be thumbing their nose at the will of the Irish people and I don’t think that that will be tolerated.”

Would a plebiscite succeed in Australia? I believe it would. There is ample evidence that the majority of Australians prefer to decide the timing and size of their family. Although the need for abortion services is falling due to better contraceptive technology, unwanted and mistimed pregnancies continue to occur. Socially conservative and timid politicians need to beware of frustration of the younger generation who will not tolerate women being treated as second class citizens or the stigmatisation of sexual and reproductive health. Beware the moral high ground. It will not win votes.