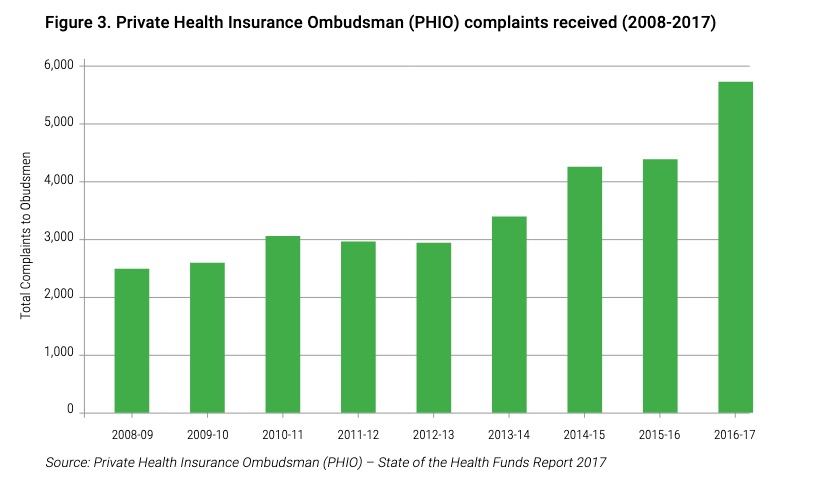 Is it time to ditch the private health insurance rebate? It’s a question Labor can’t ignore

Introduction by Croakey: Whatever their political stripes, the next Federal Government must commit to reforming “the dead cat” of the private health insurance system, according to health policy expert Professor Stephen Duckett.

“Over recent decades we have learnt that propping up industries in the face of consumers turning away from their products is not a long-term proposition,” he writes in the article below first published at The Conversation.

Croakey suggests any such examination should also centre an explicit investigation of the impact upon health inequities of public subsidies of private health insurance (see further responses via Twitter beneath the article).

This election campaign, Labor’s health focus is expected to be on Medicare, which it regards as one of its defining achievements. But with almost half the population covered by private health insurance, Labor needs to tread carefully on this vexed topic.

Government subsidies for private health insurance premiums cost over A$6 billion a year. Is it time to scrap the rebate and redirect these funds elsewhere in the health system?

If Labor sees private health insurance as a system that provides unnecessary extravagances that Medicare won’t cover, it can’t justify this type of subsidy.

But picking a fight with the private health insurance industry would be politically foolhardy. And families have factored the subsidies into their budgets, so cutting or eliminating the subsidies would put further pressure on family finances at a time of wage stagnation.

Read more: Do you really need private health insurance? Here’s what you need to know before deciding

How did we get here?

Private health insurance has been a contested policy zone for more than 50 years.

Gough Whitlam prompted a bitter debate over whether government health insurance should be for everyone (universal) or just for the poor (residual), when in 1968 he committed Labor to a universal scheme to replace the then residual model. The new universal model eventually became Medibank in 1975, then Medicare in 1984.

It wasn’t until the 1996 election that then opposition leader John Howard formally conceded defeat on this issue, acknowledging that Medicare should be for all. However, Liberal governments keep returning to “residual” rhetoric, arguing wealthy people should pay directly for health care rather than use the universal scheme, Medicare.

After winning the 1996 election, Howard opened a second front in the health-care war by reinstituting government subsidies for private health insurance.

The cost of the first subsidy scheme – known as the Private Health Insurance Incentive Scheme – was estimated at A$600 million a year. Two decades later, the private health insurance subsidy has increased ten-fold to more than A$6 billion a year.

Liberal governments offer carrots to encourage people to take out insurance – subsidies for premiums – but also use two sticks to penalise people for not taking out insurance. The sticks have proved to be more effective than the carrots in increasing insurance enrolment.

This stick takes the form of a Medicare Levy surcharge, starting at 1% of income to be paid by singles who earn more than A$90,000 a year, or families on more than A$180,000 a year. People who have private health insurance are exempt from the surcharge.

The second stick penalises people who do not take out private health insurance before turning 31. They have to pay higher premiums if they join later in life. When introduced in 2000 this scheme – known as Lifetime Healthcover – increased coverage from about 30% to around 45% of the population.

What is private health for?

Neither side of politics has confronted the fundamental question: what is the role of private health care and private health insurance, given we have universal health coverage?

Labor approaches private health insurance a bit like one might approach a dead cat on the table – as an issue that has to be dealt with, but that everybody wishes would just go away.

But private health insurance won’t go away. If Labor sees it solely as a complement, providing unnecessary extravagances not covered by Medicare, then the argument for any public subsidy is weak.

But if Labor sees private care primarily as a substitute, then the A$6 billion of subsidy to private care through the rebate may be better value for money than further support for public hospitals. If that is the case, Labor will have to confront the issue of whether to continue some combination of carrots and sticks, and what can be done to make the industry more efficient. 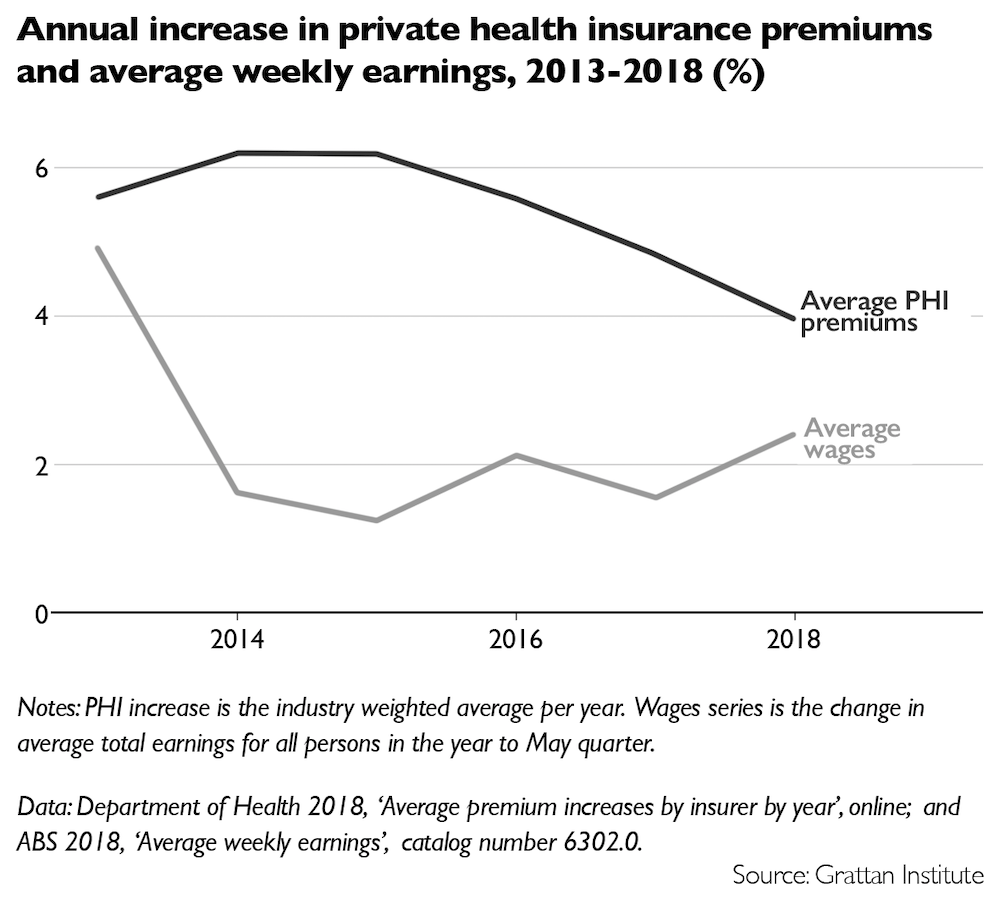 Labor is seeking to exploit public outrage at high private health insurance premiums by promising to establish a Productivity Commission review into the sector.

In the meantime, Labor would freeze private health insurance premium increases – in effect, kicking the policy can two years down the road.

Whichever party wins the election, it ought to revisit our nation’s history with failing industries. Over recent decades we have learnt that propping up industries in the face of consumers turning away from their products is not a long-term proposition.

Private health insurance is no car industry, but it’s not a sunrise industry either. Yet it receives a greater subsidy than manufacturing at its subsidised peak at the end of the 1960s.

The government has to decide why it’s subsidising the private health care industry. If it decides it doesn’t want to in future, it needs a carefully managed transition.

Even if private care is seen primarily as a substitute for the public sector – and a way to take some demand off – subsidies for private care may be counter-productive.

Doctors earn more for each hour worked in the private sector, which makes it harder for public hospitals to attract staff. So subsidies may end up undermining access to care in the public system.

Australians feel pressured to take out private health insurance because of the sticks, but the product is only sustainable with its current level of coverage because of the carrots: the hefty public subsidies. Without the carrots and sticks, coverage would probably return to the pre-1996 levels of around one-third of the population.

The incoming government should look at the effectiveness and efficiency of the carrots and sticks, whether consumers and taxpayers get value for money from private health insurance, and how to address rising out-of-pocket costs.

• Professor Stephen Duckett is Director of the Health Program at the Grattan Institute. Follow on Twitter: @stephenjduckett 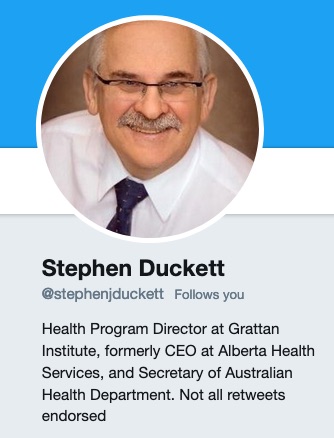 The feature image is sourced from the Australian Medical Association’s Private Health Insurance Report Card 2018, as is the image below. 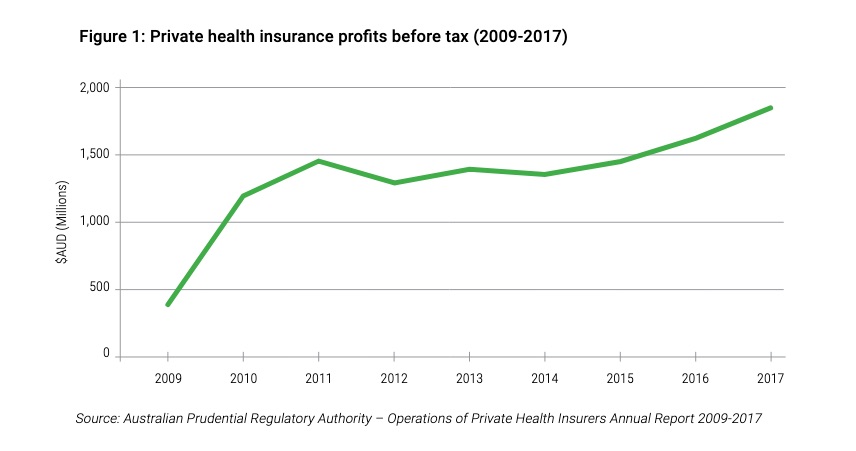 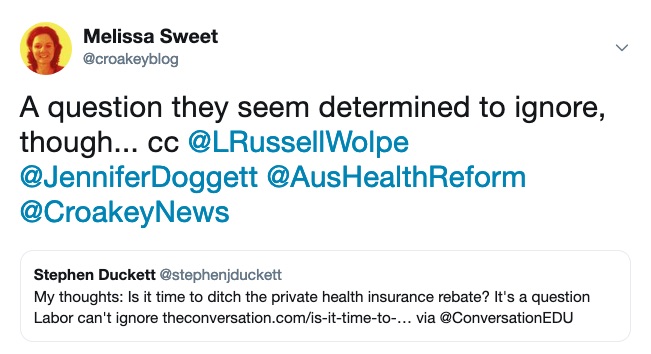 PrevPrevious“Get on with building a health system that is simpler, fairer and more affordable for all”
NextWhat would real reform to tackle out-of-pocket health care costs look like?Next