Is the Dietitians Association of Australia in the pocket of Big Food?

Public health lawyer, author and blogger Michele Simon has been investigating conflicts of interest and the Dietitians Association of Australia.

Simon, president of Eat Drink Politics, a corporate watchdog consulting firm in the US, has released an Australian edition of “And Now A Word From Our Sponsors”, detailing close links between the food industry and DAA.

(Some similar concerns have been raised previously at the Croakey Register of Influencers in Public Health).

Below, Croakey cross-publishes Simon’s report from her blog (including corrections that were made to the initial post, and DAA responses to both Croakey and Simon).

Her report is timely in light of a new report in the US that challenges powerful food industry interests, stating that a diet higher in plant-based foods and lower in calories and animal-based foods is more health promoting and is associated with less environmental impact than is the current US diet.

(For more about the Scientific Report of the 2015 Dietary Guidelines Advisory Committee, see this article by Professor Marion Nestle describing the report as “courageous”. For example, it suggests limiting the marketing of unhealthy foods to children, and notes the potential benefits of higher taxes on sugar-sweetened drinks).

Follow @WePublicHealth on Twitter this week to discuss related issues further with guest tweeter @MicheleRSimon. (Update: please join us for a Twitter interview at 1130am (NSW time) on Tuesday February 24, when it will be 6.30pm on Monday in California. Use the hashtag #wepublichealth).

Just as most western nations do, Australia suffers significantly from diet-related chronic diseases. Heart disease is the leading cause of death, killing one Australian every 12 minutes. Diabetes is also a serious health concern, with rising rates in recent years, according to the government.

The 2013 report, “And Now a Word from Our Sponsors,” also from Eat Drink Politics, found that the Academy of Nutrition and Dietetics in the United States has a serious credibility problem due to its myriad conflicts with the junk food industry.

Among the most troubling findings of the new report from Eat Drink Politics:

Lucy Taylor is a dietitian specializing in plant-based diets practising in Melbourne. She is not happy with her chosen profession’s leadership:

“As a dietitian, I feel like I’m forced to be a mouthpiece for a the food industry. I object to being fed masses of industry-funded ‘research updates’ with messages that I am supposed to work into my practice such as, eat red meat 3 times a week from Meat and Livestock Australia, or consume 3 servings of dairy per day from Dairy Australia. The worst is from the food companies themselves, like Coca Cola telling me how wonderful their calorie-controlled smaller cans are.”

Melanie Voevodin is the dietitian whose name is being tarnished on the DAA website, she says because she dared to speak out. She plainly sees how such conflicts damage the entire profession:

“Each individual dietitian bears the public scrutiny of the actions of the DAA and their continued financial relationships with the food industry and their front groups despite the evidence of a conflict of interest. That conflict exists whether real or perceived, whether denied, acknowledged or managed. As long as DAA maintains these financial relationships, every individual dietitian will bear the public scrutiny. It is therefore reasonable to suggest DAA is now the single greatest barrier to the credibility of the profession.”

What is the role of the Dietitians Association of Australia—the nation’s largest organisation of nutrition professionals—in preventing or at least stemming the tide of diet-related health problems?

It’s high time for this organisation to look inward. The health of all Australians depends upon the independence of the nutrition profession and its leadership’s ability to be the nutrition leaders they claim to be, free from sponsorship money.

In the aftermath of my report on the U.S. Academy of Nutrition and Dietetics, a group of RDs formed “Dietitians for Professional Integrity” to protest AND’s sponsorship conflicts, and continues to maintain a Facebook page with 11,000 likes.

Perhaps it’s time for an international coalition to protest professional conflicts in Australia and globally.

* Corrections: The report mistakenly refers to these two dietitians as DAA spokespeople when instead DAA features them on its website under “In the Spotlight“. I have also reworded parts of this post to reflect DAA’s position regarding Melanie Voevodin.

Update: DAA’s CEO Claire Hewat wrote this letter in response. Other than the above correction, I stand by the report. The letter ignores the main critique: that conflicted sponsorships tarnish the profession and harm public health. 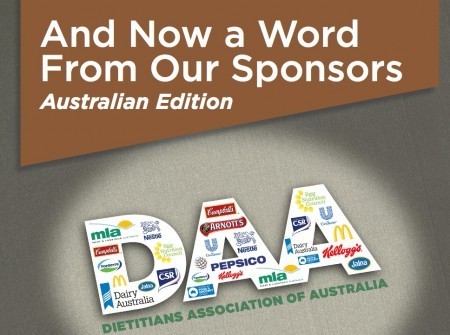 DAA were contacted for comment and provided the following comments from Claire Hewat DAA’s CEO:

“Michele Simon’s report states that a DAA member was ‘stripped of her credentials’ and suggests that this was because she ‘dared to speak out’ about DAA’s Corporate Partnerships. To us, this infers that DAA is gagging our members about discussing this issue. This is not the case.

The former member mentioned in the post was not stripped of her credentials by the Association. A complaint was made against her by another member of the profession, regarding professional behaviour, through DAA’s formal complaints process. This person chose not to renew her DAA membership and Accredited Practising Dietitian (APD) status, thereby leaving the complaint unaddressed. At any time, this person may choose to address the complaint against her, and renew her DAA membership and apply to be reinstated to the APD credential.

DAA is a professional member organisation. Our top priority is supporting our members – the country’s nutrition and dietetic professionals.

DAA recognises that Australians eat from the entire food supply – and due to this, we believe we need to work with groups from all sectors, including the food industry. This is a considered decision. We are committed to successful partnerships through careful management and policies, being transparent and maintaining independent views.

DAA’s Guiding Principles for engaging with DAA Partners and Sponsors is available on the DAA website. These outline the current DAA processes specifically related to sponsorships, corporate partnerships and endorsements, and the rigorous evaluation and risk assessment process that DAA uses.”