Is the media juggernaut sidelining good policy in Indigenous affairs?

Two comments have always stuck in my mind when it comes to the role of the media and the public’s health. One is from Dr Alex Wodak, law reform advocate, social justice champion and drug and alcohol physician, who once said: “The media has more impact on health than all the stethoscopes in the world.”

The other is from a former senior health bureaucrat from NSW:

“In ministers’ offices, health departments and CEO offices, the first action each morning is not to check on the status of patients or the health system under their supervision but to check the headlines or radio comments and consider how to respond immediately.”

But of course it’s not only in the health field that the media’s coverage has a profound impact.

Two researchers involved in the Australian News Media and Indigenous Policymaking 1988–2008 Discovery Project have described the impact of the media upon Indigenous policy making in an essay at Inside Story, Managing the Optics of the Intervention, that is well worth reading.

Kerry McCallum, Associate Professor of Communication and Media Studies at the University of Canberra, and Lisa Waller, a former print journalist now doing a PhD at the University of Canberra, say that media logic – defined as “involving a range of skills and tools to monitor, pre-empt and react to news media representation of their policy field” – has permeated the practices of Indigenous affairs policy professionals at every level, from minister to junior bureaucrat.

McCallum and Waller say that “managing the optics” narrows the range of policy options available for improving the health and wellbeing of Indigenous people.

One senior federal bureaucrat said Australia had adopted a “done- to” model of Indigenous affairs policy: “I’ll do health ‘to you’ rather than the self-determination model which will give you the skills and empower you to do it for yourself… if you look at the Cape York Welfare Reform trial and if you look at the Intervention, then that was really the big culmination of ‘you can’t do it for yourselves.’ We’re going in now with a big stick and we’re going to do it for you.”

(Meanwhile, Aboriginal leaders have today said they will declare a day of mourning when legislation to extend the Northern Territory intervention in remote Indigenous communities for another decade passes parliament.)

In the article below, a GP working in Aboriginal health, Dr Tim Senior, urges politicians and policy makers, journalists and the media industry to reflect upon how they might work differently. Indigenous people are the ones who suffer, he says, when politicians and public servants focus on avoiding a blow from the press, rather than effective policy.

“Managing the Optics of the Intervention” – A Real Eye-Opener

Here’s your homework. You all have to read this Inside Story article, “Managing the Optics of the Intervention.” 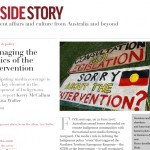 I’m intrigued to hear what you think. It’s a wonderful bit of research, with some disarming honesty from the people developing public policy in Indigenous health. It sets out clearly how the main driver for policy in Indigenous affairs has been media representation of this field.

For me, discovering this has been a bit like finding your parents having sex – everyone always said it happened, but you didn’t really want to believe it. It turns out if happens much more regularly than you thought, and are experts in the field!

I’m afraid my reaction confirms me as a naive idealist. My training as a doctor doesn’t include training in policy, lobbying or how the media works.

My main work is in seeing people who might be unwell and working with them to become more healthy. There is good evidence that to be effective at this you need to enable people to take decisions for themselves, rather than just tell them what to do.

And, as a doctor, it fairly quickly becomes apparent that people’s health and their ability to make decisions about themselves depends on all sorts of things outside the consultation. This would be things like the price of apples compared to Big Macs. Having somewhere to live. Having the skills to apply for and get a job. Having transport to get to a job interview. Having money to afford medications. Knowing you will be treated with respect on arriving at hospital. Many Croakey readers will be able to recite lists like this in their sleep.

As a doctor you have two choices at this point. You can erect a very large “Too-Hard-Basket” and reach for a very large prescription pad. Or you can start having a go at advocating for policy changes, which is what I have done, in the belief that those making policy might listen – and most importantly will develop policy in partnership (real partnership) with Aboriginal and Torres Strait Islander communities. And in fact the Close the Gap coalition have had real success in this, being led by a strong group of indigenous organisations.

So to be confronted by confirmation that much policy is made by people with good intentions, aware of what good policy might be, and yet be so hooked up to the media ramifications of any decisions made that things just get pushed off course. It’s like good policy is a small motorbike pushed off the road by a media juggernaut.

The main focus of the Inside Story piece is the Northern Territory Intervention, in 2006, and that “Media logic operated at all levels of the policy process, from development, through announcement, to implementation.”

So this gives us an opportunity to see the effect of making policy in this way. As you might expect with any complex intervention in a complex problem, there have been some people who have welcomed the outcomes, particularly improved personal safety from measures that result in reduced alcohol consumption.

However, the Australian Indigenous Doctor’s Association review of health outcomes in 2010 showed it could lead to profound long term damage – both in health outcomes and in the trust Aboriginal people have in government agencies and policies.

And, now that we know the policy announcements are being decided by the “optics”, how far do we trust the official government reports?

The study finished in 2008, so things might have changed – indeed, the government are using better terminology now about consultation and partnership. But for Aboriginal and Torres Strait Islander people there have been changes of government and policy before, and they are able to see a single line of history stretching through from invasion, to “soothing a dying people,” to the Stolen Generation, to suspension of the Human Rights Act and an army occupation.

What can change this pattern?

This is where I get stuck. I can see that policy-makers will feel the grief from politicians who get a bad press. I can see that politicians will see their re-election prospects disappear with ongoing adverse reports in the news media. And so these groups both feel personally more angst at what gets reported than they do at the experience of people whose lives are affected by their policies.

I can also imagine the difficulties of journalists – under pressure to write interesting stories. “People living slightly longer” and “2 groups with different points of view sit down together to nut out a solution” won’t get many front pages held.

I’m also a bit worried about the future. What sort of policies will be made with one eye on a newspaper sector owned by mining magnates? Will policies to protect native title over mining rights get a fair hearing? What about policies that might reduce inequality to improve health and social outcomes? How much pressure will there be then?

So I see no easy way forward, short of all wearing these T-shirts. It will take some courage from our political and public service leaders to make policy that might not be easy to sell, but at least has the benefit of being likely to work. It will take courage from journalists and media organisations to realise the power they hold in influencing policy, and to use this responsibly.

Ultimately, I have two advantages as a clinician. The first is our Hippocratic imperative to do no harm. A similar approach in policy, a Prime Directive if you will, would serve us well.

The second advantage is that I see the effects on people of the policies implemented. Each time a politician or public servant avoids a blow from the press, it lands on a real person in a community somewhere.

I think we can do better, and I’d like to hear suggestions from those less naive than me.

• Declaration: Tim Senior has represented the RACGP at the Close the Gap Steering Committee. These opinions are his and do not reflect those of the RACGP or Tharawal Aboriginal Corporation, both of whom employ him.

Declaration from Croakey: I write for Inside Story and have been interviewed by Kerry McCallum for her research.

• Why do I work in Aboriginal health?

PrevPreviousCan bloggers help to change our drinking culture? Is alcohol your best friend? And a few other questions still to be answered…
NextWhy aren’t more academics making their own apps and getting digitally savvy?Next