Is the post-budget “class warfare” discussion helpful for public health?

Have the Coalition’s Tony Abbott and Joe Hockey done public health a favour (even if unintentionally) by putting the issue of class on the table for debate?

Health economist Professor Gavin Mooney suggests in the article below that those with a concern for population health and health inequalities should not shy away from a class-based discussion.

(And, by the way, Mooney’s new book, The Health of Nations: towards a new political economy, was launched this week – see bottom of the post for more details on its analysis of how the exercise of power, in health care systems and society more generally, affects health).

Class warfare, inequality and the social determinants of health

It seems that Tony Abbott wants us to recoil in horror that the Prime Minister is waging what he calls a class war. How dreadful of Julia Gillard! Or maybe he seeks to make Gillard seem silly in raising the issue of class in this egalitarian, fair-go society? We are all Australians. We all have the vote. Whether we are called Clive,  Gina or Twiggy or Tom, Dick or Harriett doesn’t matter.  As the song says “We are one, but we are many”. To suggest anything else is un-Australian and reeks of envy.

According to Abbott, the Labor government’s budget plays a class war card. This is because it did not follow through on the previously declared commitment to cut company tax from 30% top 29%. Instead the budget redistributes money to the poor.

How dastardly of Gillard and Swan – especially as (according to Abbott) Australia has been largely free of the class struggles seen elsewhere. He told Parliament: “The fundamental problem with this budget is that it deliberately, coldly, calculatedly plays the class war card”.

He went on: “It cancels previous commitments to company tax cuts and replaces them with means-tested payments because a drowning government has decided to portray the political contest in this country as billionaires versus battlers”.

This attempt at a very minor redistribution from rich to poor (after years of movements in the opposite direction) is “war”? Wars kill people. This “war” by reducing inequality can be expected to save lives – which makes it a funny old war!

And we need to be wary about Abbott’s concerns about companies paying over the top in terms of tax. As Jo-anne Schofield from Catalyst Australia reports:

Abbott’s contribution to avoiding a class war is to propose abolishing the mining tax.

So the class of Clive, Gina and Twiggy would be having to do battle – again – against the battlers. (They battled before and brought down the original mining tax, the “RSPT”.)

But Abbott is not alone. His Shadow Treasurer, Joe Hockey indicated:

Inequality in Australia is growing. The work of Wilkinson and Pickett and others indicates that countries which are more unequal are less healthy.

What is particularly interesting in the context of the issue of a class war in Australia is the debate in the literature on how best to interpret the relationship between inequalities in income and health.

Important here is whether inequality at an aggregate societal level (i.e. the nation state) and population health are related. There may or may not be relations between such inequalities at other more micro levels, but the social stratification issue or class issue is the point of interest here.

The only study that I have been able to identify that looks at this question specifically is that by Wilkinson and Pickett. They conclude:

“Our interpretation of 168 analyses of the relationship between inequality and health is that income distribution is related to health where it serves as a measure of the scale of social class differences in a society … In small areas, where income inequality is unlikely to reflect the degree of social stratification in the wider society, it is [as the authors show] less likely to be related to health. The overwhelmingly positive evidence for studies of larger areas suggests that this interpretation is correct. The fact that social stratification is such a fundamental feature of social organisation explains why there are so many socioeconomic factors correlated with inequality” (emphasis added).

Navarro shows that the growth of inequalities in most OECD countries in the last few decades is due to tax policies that favour the rich, the attack on trade unions, the erosion of the welfare state and “economic policies that gave priority to the reduction of inflation via monetarist policies that reduced the rate of economic growth and increased unemployment”. And Navarro also focuses on class as the driving force in relating health to inequalities.

While Abbott’s use of the phrase “class warfare” is rather strong language – at least the warfare bit – the debate and in turn policies around inequality of income as a major social determinant of ill-health are, in my view, best seen in class terms. As indicated, the doyens of the inequality and ill-health hypothesis – such as Wilkinson and Pickett and Navarro – see that phenomenon in terms of class.

This allows a recognition that the issue here is about power rather than income per se. The class of Clive, Gina and Twiggy are in a position to use their power to influence the ways in which society operates – and often as well to influence how governments operate, most explicitly with the earlier version of the mining tax, the RSPT.

For that class to use their power and spend $20 million to bring down the earlier mining tax (the RSPT), a tax that would have reaped $10 billion in government revenue, this was a pretty good investment for their class. They have the power to do such things.

The rest of us – the 99% – are in the powerless class and suffer as our supposedly democratic government kowtow to the Clive/Gina/Twiggy class. We then miss out on the health and other services that that $10 billion might have brought us.

Of course these are class issues! Of course Abbott and Hockey want to deny that class is an issue. If the 99% were to recognise that it is a class issue, the chances of the Coalition being elected next election would be seriously dented.

But those interested in improving population health need to embrace the notion and language of class in our thinking and in our analyses. To couch this in terms of waging war would be counterproductive.

However, to use class and the question of who wields power over whom in furthering inequality and to look at the impact of that on population health is the way to go.

It is not a war – but we do have a fight on our hands in promoting the social determinants of health to get the issue of inequality, in class terms, across to the public and policy makers.

So, Messrs Abbott and Hockey, thank you for putting the issue of class back on to the political agenda in Australia.

Those of us concerned with addressing inequality as a major social determinant of ill health can now use your concerns about ‘class warfare’ to focus not just on lessening income inequality – although that does matter – but on addressing the class divide.

• On related matters, this post-budget analysis at Inside Story, by Peter Whiteford, is worth a read: Social welfare and class warfare: the give and take of budget balancing. 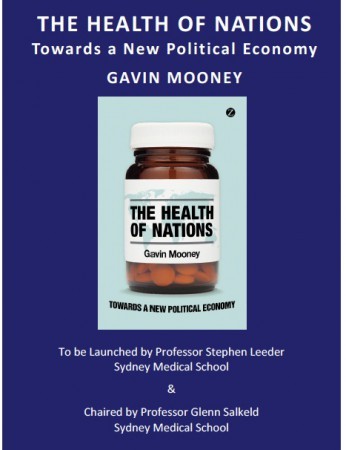 ‘Inequality, whether of wealth or power, undermines our best efforts to provide effective support to communities in their quest for better health. Mooney challenges neoliberal assumptions and through elegant case studies demonstrates how we can improve what we do through real community involvement in making decisions about health according to the values that matter.’

‘In this most original and highly readable book, Gavin Mooney makes a compelling case that we can do far more to improve people’s health in both developed and developing countries. He ably documents current shortcomings, concluding that most of the problems lie in ‘neoliberal’ policies – that is, those that sacrifice public decision-making to that of the marketplace, which in turn is controlled by corporate interests. Rather than just posing the problem, he comes up with thought-provoking solutions, showing, for example, that local citizenry are fully capable of coming up with sophisticated organizational and distributional policy aimed at improving the health of the community. This book aims high and achieves.’

‘This is a biting and insightful book on what is wrong with the political economy of the world today that so much goes wrong with our health systems. Sharply written and informative in the best Zed tradition!’

‘This is Mooney at his ‘no-holds-barred’ best, laying bare the power relationships affecting health. Unless health economists start paying attention to the political economy of health, progress in solving the health challenges facing us will be painfully slow. This book is setting us on that path.’

PrevPreviousA local council takes on fast food: is this the future for improving public health?
NextIntroducing a wealth of ideas for new online health-related publicationsNext