Is this “cappuccino-style” health reform? Marking an anniversary…

Tomorrow marks the 2nd anniversary of the release of the National Health and Hospitals Reform Commission’s final report, A healthier future for all Australians.

For those whose memories have suffered under the subsequent onslaught of related documents, the report told us that there was a “compelling” case for reform, and that this should have three goals:

2. redesigning our health system so that it is better positioned to respond to emerging challenges; and

3. creating an agile and self-improving health system for long-term sustainability.

Professor Philip Davies, professor of health systems and policy at the University of Queensland, weighs up what progress has been made with health reform.

Has health reform been more than froth and bubble?

A former colleague once outlined to me the concept of ‘cappuccino-style’ health reform.  It was, he explained, an approach to reform which focused on the milky froth of health sector institutions while leaving the underlying, thick, rich espresso of health care delivery largely untouched.

Two years on from the launch of the National Health and Hospitals Reform Commission’s final report, by then Prime Minister Kevin Rudd, it is timely to assess the extent to which Australia’s current health reform efforts exhibit cappuccino-like characteristics. 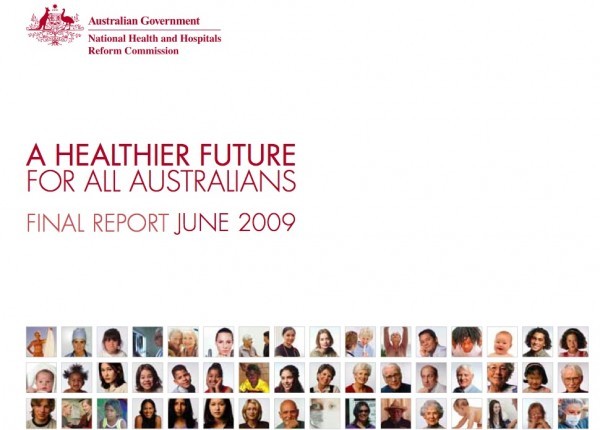 We have seen a great deal of effort devoted to establishing new institutions.

Local Hospital Networks and Medicare Locals are front and centre in the reform program.  While they might well be viewed as new organisations set up to oversee business as usual—mere froth on the cappuccino of reform—they could in fact impact significantly on the espresso of the health sector and change how health care is delivered.

The original vision for how Local Hospital Networks should be funded has now been diluted almost beyond recognition but the moves to activity-based funding (for larger hospitals at least) and stronger local governance have survived largely unscathed.

Those might appear to be aspects of reform that are far removed from the day-to-day decisions made by patients, clinicians and managers.  In reality though, stronger oversight coupled with greater transparency, incentives for higher productivity and pressures to control costs may eventually lead to significant behavioural change and the adoption of new approaches to service delivery.

Medicare Locals are undoubtedly viewed by many as inherently ‘frothy’ and unlikely to have much real operational impact.   Speaking at the AMA National Conference in May this year, AMA Victoria President Dr Harry Hemley characterised them as a “bureaucratic white elephant” while in the eyes of Shadow Minister for Health and Ageing Peter Dutton they are “yet another layer of bureaucracy in health”.

Such criticisms are understandable but potentially misguided.  They suggest that the establishment of Medicare Locals is merely an institutional reform that will do little to affect the day-to-day business of service delivery.

Indeed, at this stage it is difficult to see what a Medicare Local might accomplish that a well-performing Division of General Practice could not equally well have achieved.  Medicare Locals will, on average, be larger than predecessor Divisions; they will be expected to have greater diversity on their Boards; and they will need to work with a wider range of primary health care providers.  None of those changes required the establishment of an entirely new class of organisations; and none seems likely to impact immediately on primary care service delivery.

But Medicare Locals can be more than simply re-badged Divisions.  The key to their success will rest with their ability to see the principal constituency they serve as users, rather than providers, of primary care; to become a force that shapes local services around community needs; fosters collaboration among disparate professions; and can overcome issues of parochialism and patch-protection if they stand in the way of more effective care.  It remains to be seen whether they have the power, resources and capability to do so.

A prime candidate to be recognised as part of the froth in the health reform cappuccino is the new National Health Performance Authority.  Victoria’s Health Minister, David Davies, has described its formation as a move that “increases the number of bureaucrats but does nothing to increase health services”; archetypically frothy in other words.

Furthermore the Parliamentary Library, in its analysis of the legislation underpinning the Authority’s establishment, notes that “it is unreasonable to expect that a … national performance and accountability framework will be able to directly change practice on the ground level” and observes that other bodies such as the COAG Reform Council, the Australian Institute of Health and Welfare, the Australian Bureau of Statistics, and the Australian Commission on Safety and Quality in Health Care already operate national performance monitoring mechanisms.

On the other hand, the Minister for Health and Ageing Nicola Roxon noted in her Second Reading speech to the House of Representatives that the new Authority would inter alia “allow for the identification of high-performing parts of the health system so those successes can be transferred to other areas; identify areas of the health system that require improvement so that action can be taken; and improve the health choices of Australians in making key decisions about their own healthcare needs.”

Those goals, if achieved, will shift the National Health Performance Authority from froth to espresso.  If it is merely another body that passively collects and reports routine data, then it will most definitely contribute little to real change in health care delivery but if, as Minister Roxon obviously anticipates, it provides the stimulus for recognising and sharing best practices, for tackling performance weaknesses and for genuinely empowering patients then the Authority may indeed come to impact on what happens at the bedside and in the consulting room.

Of course, there are some aspects of the reforms that seem fated to remain as froth—institutional tinkering that will deliver to few, if any, real changes.

It is difficult to see how the National Preventive Health Agency will achieve much other than business as usual at the coalface of (curative or preventive) health services. Three-quarters of its $133 million budget in the first four years is to be allocated to social marketing campaigns and more than half the remainder is earmarked for “agency functions”. Given that the Department of Health & Ageing has previously proved itself to be very adept at social marketing, any changes stemming from the establishment of a new organisation will surely be at best marginal.

Another group of candidates that might widely be viewed as institutional froth are the growing ranks of GP SuperClinics. Some of them, doubtless, are addressing previously unmet needs or developing new approaches to service delivery but was it really necessary to embark on an elaborate consultation and “invitation to apply” process in order to set up new organisations?

It seems there are already plentiful examples of established GP practices that have adopted innovative models of care and doubts continue to be expressed about the logic underlying the SuperClinics’ location.

Arguably it is the constraints implicit in Medicare funding rather than the size or location of practices that underpins access problems in primary care. Rather than investing in the froth of new physical and institutional infrastructure interventions aimed more directly at the espresso of primary care funding and delivery might be a more effective approach to reform.

So, did the National Health and Hospitals Reform Commission focus entirely on tinkering with the institutional froth of the health sector while failing to address the underlying espresso of service delivery?

Not so. Several of the Commission’s recommendations had the potential to effect real and rapid change:-

When he launched the Commission’s report at the ANU’s John Curtin School of Medical Research on 27 July 2009, Kevin Rudd claimed it reflected a view that “fundamental reforms are now needed, rather than just tinkering at the edges”.  Thus far we have seen more reform of institutions rather than services.

To date, the Government’s reform efforts appear to have done little that will impact directly on the underlying espresso of our health system.  That espresso comprises the millions of decisions made every day by health care consumers and providers.   Collectively those decisions shape individuals’ use and experience of care, drive the costs of our health system, and determine the health outcomes it achieves.  Few aspects of the reforms seek to influence those decisions via new or changed incentives on patients and health professionals.

It’s become something of a cliché to argue that form should follow function in architecture and design.  The same is often said to apply to organisational structures.

The Government’s approach to health reform could be viewed as running counter to that principle, with its focus of form and a hope that changes in function will follow.

Perhaps it’s time to penetrate beneath the froth of form and start to look again at some of the Commission’s bolder recommendations aimed at the functional espresso of our health system.

PrevPreviousA creative approach to engaging young people in discussions about organ donation
NextMore reflections on health reform: so much more is neededNext