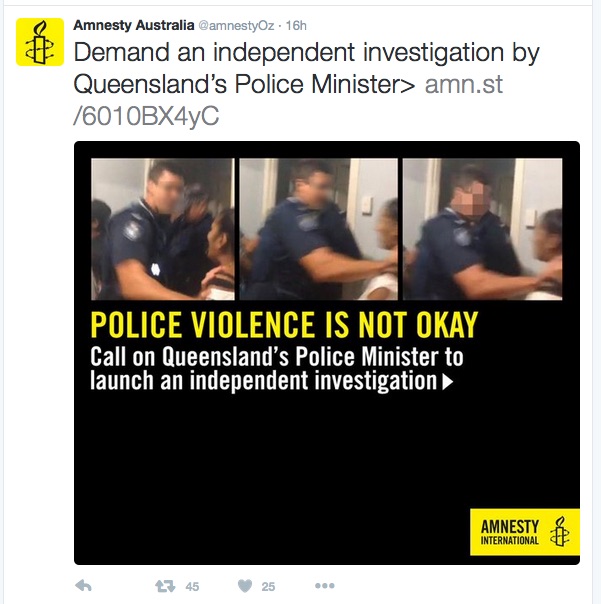 As Amnesty International calls for an independent investigation into police violence against an Aboriginal woman in Queensland, the award-winning Kelly Briggs writes for the #JustJustice series about “the talk” that Aboriginal parents need to have with their children about police.

I am a parent of two Aboriginal boys. When they were 12 or so I sat them down and had the talk with them. Not the birds and the bees talk, the interacting with police talk. I am probably not the only parent of black children to have this talk with their children, and nor will I be the last.

This talk consisted of how to behave, not to let the police antagonise them into anger, to call me immediately if they were taken by the police and above all else, not to talk to them without me present.

If you are reading this, you may be assuming the police would only be speaking to my children if they have done something wrong. This couldn’t be further from the truth.

Because of racial profiling (refers to the discriminatory practice by law enforcement officials of targeting individuals for suspicion of crime based on the individual’s race, ethnicity, religion or national origin), my children everyday become targets for police.

I am not over reacting; the statistics of Aboriginal imprisonment rates are a major factor in me telling my children to use the utmost caution around the police. Below are the statistics of young people in prison 2013 – 2014. 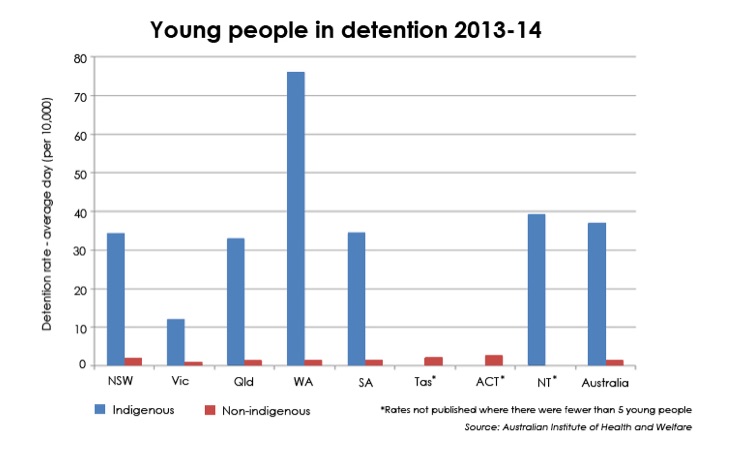 It is incredibly hard to look at these charts and not infer racial profiling from the results.

Mick Gooda, the Aboriginal and Torres Strait Islander Social Justice Commissioner, who wrote the foreword on Aboriginal justice issues for an Amnesty International Report has said: “We’ve got cases where a kid in WA got charged with receiving a stolen chocolate frog. Would that happen to a white kid? Probably not.”

He goes on to say:

“We have high rates of unresolved intergenerational trauma, which has led to disability, alcohol-related disability, brain injury and mental health issues. It makes a mockery of our justice system if we incarcerate children who have some sort of cognitive impairment, which we increasingly think is the case.”

He is right. We need to shift the conversation to why such seemingly mild infractions are treated as criminal, and not for what they are, inter generational trauma being played out on a basic scale. As a country we must begin a conversation about justice reinvestment, where prison is treated as a last resort and not the first.

Is it any wonder that Aboriginals do not trust the police after looking at the facts? In 1987 there was an inquiry into Aboriginal deaths in custody. Ninety-nine cases were examined and not one out of those 99 deaths was ruled as the police’s fault. 99.

The commission did, however, hand down 330 recommendations, of which not even a handful have been instituted. One of them is the Custody Notification Service, which is only implemented in NSW and Canberra.

It ensures that Aboriginal people have an opportunity to call for legal advice. This service is seriously underfunded and at times relies on assistance from the public.

So before you judge me for instilling distrust in the police, now that you have read my reasons, can you honestly say you would not have the same talk with your children if they were Aboriginal?

• Kelly Briggs was the winner of Social commentary blog of the year 2014 by the Australian Writers Centre for her blog. Read her previous Croakey articles here, and follow on Twitter at @TheKooriWoman 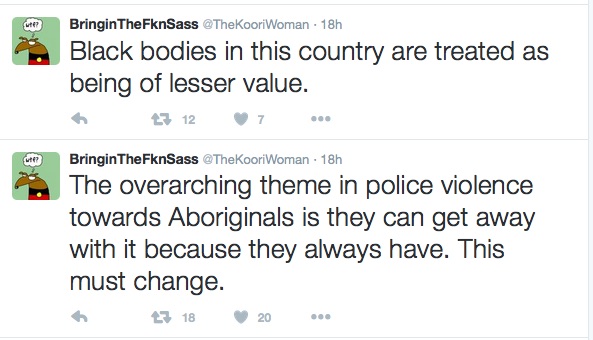