Is this the future for Medicare Locals? (With musical references)

Health policy buff Professor Philip Davies no doubt has many claims to fame. Today, however, he stakes a claim as the first Croakey contributor to quote Leonard Cohen and David Byrne in a single post.

More than that, he also has a vision to share for the future of Medicare Locals – although, as he points out, there are some rather formidable barriers to achieving it in Australia.

“An Aladdin’s cave” of useful data for patients, practices and policy makers

US journalist Lincoln Steffens returned from the post-revolutionary USSR in 1919 to claim “I have seen the future and it works”.

After visiting what was obviously a none-too-impressive Italian hotel Former Talking Head David Byrne blogged that “I have seen the future and it is broken”.  And in his song ‘Future’ Leonard Cohen asserts that “I’ve seen the future, brother: it is murder.”

Anyone who has followed recent debates on Medicare Locals will have encountered similarly varied views on their prospects.  Opinions seem to range from Steffensian optimism to Byrne-like gloom (but thankfully don’t yet appear to have sunk to Cohenesque levels of despair).

Anyone who is looking for a truly tantalising vision of where Medicare Locals might, one day, be heading should take a look at the newly-published National General Practice Profiles on the English Public Health Observatories’ web-site.

Therein lies a veritable treasure trove of information on primary care practices: the populations they serve, the health issues they face, the outcomes they deliver, and the levels of patient satisfaction they achieve.

More than 150 separate data items are presented for individual GP practices and aggregated to the level of the Primary Care Trust (which, it could be argued, is equivalent in some respects to an Australian Medicare Local).  Regional and national averages are also provided for comparative purposes.

A GP colleague described the site as “like walking into an Aladdin’s cave”.  It certainly provides a valuable resource for policymakers (who can use the data to locate exemplars of best practice and identify ‘hot-spots’ where additional support or other interventions might be needed) and for practitioners (as an aid to benchmarking their practice against its peers).

The site is also potentially invaluable, and empowering, for patients who might want to assess the performance of their local practice.

And contrary to a myth one often hears peddled in Australia, NHS patients are at liberty to choose and change their GP; a right that is enshrined in the NHS Constitution’s commitment that “You have the right to choose your GP practice, and to be accepted by that practice unless there are reasonable grounds to refuse, in which case you will be informed of those reasons.”

Sure, the data need to be treated with care, and there are ample caveats to that effect in the accompanying ‘User guide’.

Some data are missing for some practices, but overall coverage is excellent.  And the Observatories’ web-site offers some very powerful tools to present, compare and analyse figures from different practices and/or areas.

Could we see the same thing here?

In the case of Medicare Locals the answer may well be ‘yes’.

Medicare Locals will be expected to identify health needs and service gaps, to plan services, and to provide information about those that are available in their local area.  A National Health Performance and Accountability Framework is being developed to define performance indicators for Medicare Locals.

The National Health Performance Authority is tasked with producing Health Communities reports which are expected to details Medicare Locals’ achievements in the context of the Framework. It may not be unduly optimistic, therefore, to anticipate something akin to the Observatories’ powerful resource emerging as a component of the Medicare Locals’ accountability and monitoring regime.

Sadly, however, Australia will struggle to match England’s practice-level reporting.  The absence of any formal and enduring affiliation between patients and practices in our system makes it impossible to identify the characteristics of a practice’s population with any degree of accuracy.  And without knowing whom each practice serves, many of the measures quoted on the Observatories’ site simply cannot be derived.

To take just two of the Observatories’ measures, for example, it is impossible for us to work out what proportion of a practice’s patients is satisfied with its opening hours, or has had its total cholesterol measured in the previous 12 months, without knowing how many patients that practice serves.

Our inability to link patients with practices with any degree of certainty, and the so-called ‘denominator problem’ that creates, seems likely to remain as the Achilles’ heel of practice-level monitoring for the foreseeable future.  Unless and until we are able definitively to associate patients with practices it will fall to Medicare Locals to take responsibility for population health outcomes.  Tools such as those developed by the English Public Health Observatories should play a key part in assessing the extent to which they succeed in that task.

If the English Public Health Observatories’ web-site represents the future of Medicare Locals then it is, indeed, a future that works.   And hopefully one that proves ultimately to be more sustainable than that foreseen by Lincoln Steffens.

• Philip Davies, Professor of Health Systems and Policy in the School of Population Health at the University of Queensland

The snapshot below shows the results for one general practice in Yorkshire, and how it compares on various measures of patient satisfaction. 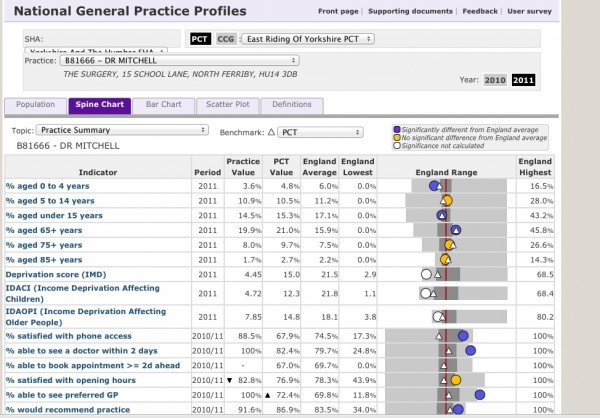 PrevPreviousWhat is the future of scientific publishing?
NextThe Ministerial reshuffle and health: plus analysis of Roxon’s tenure and advice to PlibersekNext