Home Healthcare and health reform allied health care It’s about the wellbeing of all of us, not just doctors: concerns re AMA copayment deal

It’s about the wellbeing of all of us, not just doctors: concerns re AMA copayment deal 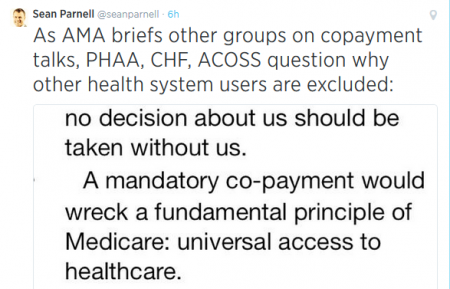 “When it comes to health costs, no decision about us should be taken without us.”

The national peak community and health consumer groups – the Australian Council of Social Service (ACOSS), Consumers Health Forum, and Public Health Association of Australia, have called on the Parliament to reject any deal struck by the Health Minister and the Australian Medical Association (AMA) on the proposed Medicare co-payment.

The “AMA model“, finally released today after weeks of talks with the Federal Government by AMA President Brian Owler, was hailed on its website (see pic below) as serving to “protect vulnerable people” but widely seen by public health advocates as protecting doctors’ own business interests and further eroding the principle and practice of universal health care in this country. Here’s the transcript of the media conference announcing the proposal. 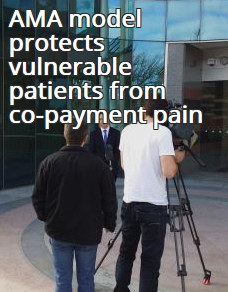 The AMA proposes a minimum $6.15 co-payment (versus the Federal Government’s $7), but requires the government to pay the co-payment for concession card holders and patients under 16 years of age.

“The AMA has long supported well-designed and well-intentioned co-payments, and that is what we are releasing today.

“Co-payments already exist. About 20 per cent of GP visits currently attract a co-payment. 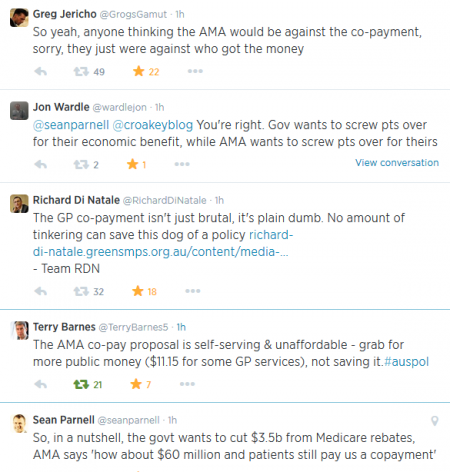 There is major concern in the health and social sectors about the AMA – an organisation that exists to promote interests of doctors – not patients, the public or public health – having a privileged position in negotiations with the Federal Government over the co-payment. The Australian Healthcare and Hospitals Association had earlier this week expressed its concerns about narrow alternatives to the government’s co-payment proposal “that arise from back room deals with the AMA, however commendable they may be.”

“We are pleased that the Government now appears willing to accept that their co-payment policy is flawed and will disadvantage those who most need assistance to access affordable health services. However, holding discussions on possible alternatives only with the AMA will deliver a narrow view on the issues and potential solutions.”

“While general practice is a critical part of an effective primary care service, it is just one part of a complex system, which includes government, non-government and private providers of primary care, community care, acute, sub-acute and aged care services delivered in a range of settings. Consumers also must have a voice in how our health system is shaped and funded.”

Aboriginal health services are also concerned about the ” dealing apparently going on behind closed doors without input from the Aboriginal health sector”, with the National Aboriginal Community Controlled Health Organisation (NACCHO) saying  exemptions from the GP co-payment for particular groups would only go part of the way to addressing the issues.

“Although we applaud the AMA’s efforts to work with the Federal Government to resolve the impact of a GP co-payment on vulnerable Australians, an exemption for Aboriginal Medical Services is not the silver bullet.

“The majority of our Services would have waived the co-payment for their patients, which would effectively have meant a cut in their funding, so in this regard it would be of benefit for our Services.”

“However, many Aboriginal people do not have access to Aboriginal Community Controlled Health Services because of where they live.

Here’s the statement from ACOSS, the Consumers Health Forum and PHAA

“Health and illness concerns us all and Health Minister Peter Dutton should be listening to voices in the community and groups representing all users of the health system,” said Dr Cassandra Goldie, CEO of the Australian Council of Social Service.

“We know that imposing a fee to see a doctor will lead to people putting off visits than can lead to early treatment which is the best health outcome, both for them and the community because later interventions are always more costly.

“It would hit poor and chronically ill people hardest, and exemptions would not go far enough. Many people would remain exposed and people on the lowest incomes will still face cost barriers,” Dr Goldie said.

Consumers Health Forum CEO, Adam Stankevicius said: “The Government suggests the Medicare co-payment is a price signal for consumers. Price signals work for discretionary items. Health care is not discretionary!”
“It is unacceptable that consumers have been left in the dark. Why is the minister restricting his negotiations with doctors, what about the people who will have to pay?

“At a CHF meeting this week, health system experts suggested several ways Australia could make the health system more effective and save billions of dollars a year. We should be considering these options before slugging consumers with a $7 price hike.”

The CEO of the Public Health Association of Australia, Michael Moore, said: “At a time when so many countries across the world are working to achieve universal health care it is appalling that the Australian government is working to undermine the very same thing.

“it is not free – it’s called Medicare. And it works pretty well. Suggestions that health spending is unsustainable are not borne out by the figures. Australia spends almost half as much as United States on healthcare (10% of our GDP) but have higher health outcomes. So why would we want to down the US road?” Mr Moore said.

In conclusion, the three organisations made the following points:

The verdict from the Twittersphere on the AMA’s proposal 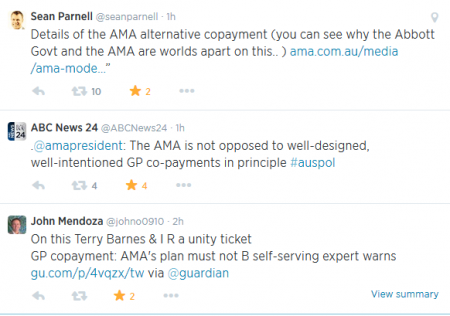 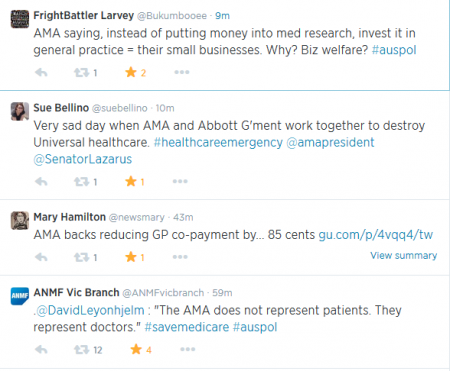