It’s all just a social media and medicine storm in a teacup, says one surgical Tweeter

Online debate about doctors’ use of social media has been running hot in the wake of new guidance from the General Medical Council in the UK.

In the article below, Sydney surgeon Dr Henry Woo (@drhwoo) suggests that many of the concerns amount to a “storm in a teacup”.

“The vast majority of doctors have nothing to fear”

On 25 March 2013, the General Medical Council in the United Kingdom, uploaded to their website their updated core guidance document entitled Good Medical Practice.

It comes into effect on 22 April 2013.  Whilst this document does not specifically outline details on how doctors should manage their behaviour on social media, the explanatory document entitled Doctors’ use of social media puts forward new guidance that has been controversial and divisive.

The response to this document has seen emotions running high and the overall impression from blogs and tweets on the subject is that the worst can be feared or anticipated.

I think that the vast majority of doctors really could not care less but most of these are those are probably not participating in social media in any form. Even those who do agree, are tending to be diplomatic or maintaining a low profile on the matter.

The devil is always in the detail and it is clear from much of the discussion on social media, that many have not actually read the background material that has lead to this controversy.

The petition against the guidance does not provide sufficient information to allow would be ‘endorsers’ to make an informed decisions about ‘signing’ and it is also important to recognize that it encourages anybody, not just doctors to ‘sign’ it.

The total numbers of those who have signed this petition cannot be used as numbers of doctors who are opposed.  Even if they were all doctors, the numbers are a miniscule percentage of the overall number of doctors registered with the GMC.

The actual wording of the contentious guidance is as follows:- 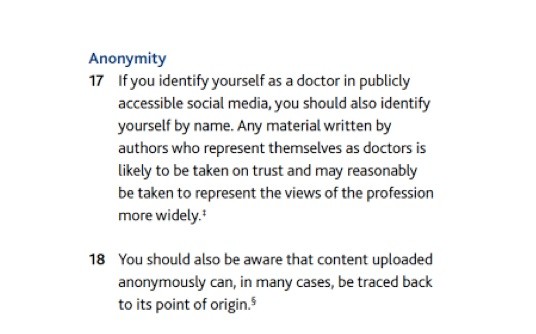 It is interesting to see how the debate has those in opposition discussing the policy as if the word “should” is “must”.

There appears to be some paranoia that the ‘should’ could become a ‘must’ over time but my own thoughts are that the GMC are unlikely to be bothered nor would ever have the resources to police such a rule.  They would however, have to investigate if a specific complaint were lodged.

If doctors do behave themselves professionally on social media and provided there are no regular reports of unprofessional behaviour on the front pages of newspapers, it is unlikely that the ‘should’ would ever become a ‘must’.

The debate has become quite emotive.  It was implied to me that I was being hypocritical in my views and sending mixed messages on the basis that my avatar on twitter has an image of me wearing loupes and a headlight and therefore obscuring my face.

I totally disagreed in that the picture perfectly reflects what I do in my work and that my name and details in my bio are totally unambiguous as to who I am and what I do and where my interests lie.  Additionally, pictures of me without the ‘theatre armour’ are easily found on a simple Google image search.

Some of the arguments I have seen include:-

Doctors will disappear off Twitter and interaction will be lost

One argument put forward is that without the anonymity option, doctors will disappear off social media and interaction will be lost. A handful of doctors have departed from social media either in protest or because they have such strong philosophical views on the subject but I otherwise totally disagree.

Doctor interaction on social media, particularly on Twitter, is alive and well and showing no sign of abating.  We only have to look at conference tweeting – at the recent 2013 Social Media and Acute Care Conference (SMACC), over 1200 users contributed to the hashtag for the meeting and the substantial majority were using their real name or at least had a link that would identify who they were.

The interaction was outstanding and the camaraderie and the excitement with tweetups was palpable for anybody following the hashtag.  This data does not suggest that doctors on Twitter are going to disappear.  Those not using their real name probably would have felt that they were missing out on something.

Those who have ‘come out’ and started using their real name on social media have in fact found the process quite liberating. 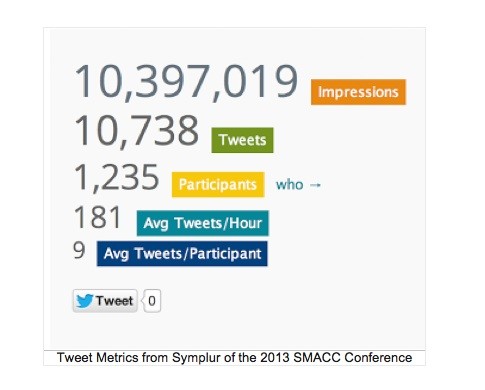 A similar interactivity was seen with the 2013 European Association of Urology Congress – again, almost all users being identifiable.

Additionally, we only have to look at weekly Twitter discussions where doctors are significantly involved and again the substantial majority are using real names – good examples are #hcsm, #hcsmanz, #meded.

More recently, a highly interactive Twitter journal club has been in operation and this has been a perfect example of doctors interacting and again, this is not likely to go away – incidentally, all doctors involved in the #urojc are using real names.

What about doctors interacting with patients and other health professionals? This will continue and a great example of this is with #hcsmanz and #healthychat.

Can doctors be trusted to exercise professionalism online?

Largely yes. But, sadly, we need regulations to ensure that doctors understand what constitutes unprofessional behaviour.

Doctors could easily argue that we do not need to have a regulatory body to tell them not to have a sexual relationship with their patients – whilst having such regulations does not always work, I have little doubt it has made many doctors think twice before embarking upon such a path.

Doctors can be trusted but a guidance on appropriate behaviour can make a difference to those wavering on taking a wrong path.  That said, remember that the guidance says ‘should’ and not ‘must’.

That doctor anonymity will help protect identification of patient cases being discussed.

I don’t really want to say a great deal about this given that patient histories should not be discussed in a public forum FULLSTOP. There are plenty of other avenues (including online) to discuss patient histories amongst colleagues, and twitter and Facebook are in my opinion inappropriate.

Suggestions have been made to run two accounts – if one account is anonymous and the other under a real name, then the user is bound to get them mixed up

Why, when patient safety is not an issue?

As recently as last week, I have seen anonymous doctors on Twitter giving personal medical advice without so much of a less than 140 character history and without even cursory view of imaging.

These lowest common denominator factors provide some explanation why there is a need for professional guidance documents.

That doctors should have the right to be anonymous in their social media activities just like any other profession.

Doctors are NOT just like any other profession.  There is a level of personal trust and privilege and power imbalance in the relationships that doctors have with their patients that is consistently like no other profession.

Doctors CAN engage on social media anonymously – this right is NOT being taken away.  It is however, stated that doctors who want to say that they are doctors SHOULD (not MUST) identify themselves.

Doctors can therefore continue to tweet and blog anonymously but should not make representation to themselves being a doctor.

There may be exceptions as to why a doctor needs to be anonymous and these could be stated in the bio or a link to explain why a nom de plume is being used – I think that this would be the fair and transparent thing to do.

I think that the public has a right to know why a doctor feels the need to be anonymous given the special status that the profession holds within the community.

Doctors will feel unable to comment on medicine and medical politics

Other professionals such as biochemists, scientists, those in the pharmaceutical or medical device industry often know a great deal about medicine without having to be doctors and are happy to comment on medicine.

If one feels a need to state that they are doctor because they want the credibility that comes with that, then they ‘should’ use their real name.

There are valid reasons to be anonymous

This is something I do agree with.  In particular, this might include whistle blowing and possibly doctors working in very small communities.

Other circumstances might include a desire to actively debate controversial emotive topics that can truly put ones safety in danger such as abortion and religious issues is another valid reason.  These doctors have good reason to not comply with ‘should’ and could make good argument to the case.

Well, nobody is actually saying this but the discussion is being carried out as though this was the case.

To quote the actual GMC guidance:-

The above quoted sentences are the 5th dot point in the section entitled “Professionalism in Action” and are in the main GMC “Good Medical Practice” document.  The 6th and final dot point states as follows:-

To maintain your licence to practise, you must demonstrate, through the revalidation process, that you work in line with the principles and values set out in this guidance. Serious or persistent failure to follow this guidance will put your registration at risk.

It is the last sentence of this 6th point that has detractors placing fear into those who will listen.  This last sentence is also used without full explanation of the definitions of ‘You must’.

For most this will end up being just a storm in a teacup.

Several commentators are propagating the argument that 1+1=3.  The suggestion that doctors who say that they are doctors ‘should’ (not MUST) use their real name is my opinion perfectly reasonable.

As per the “Doctors’ use of social media” document, it to me is totally fair to suggest that “Any material written by authors who represent themselves as doctors is likely to be taken on trust and may reasonable be taken to represent the views of the profession more widely.”

The vast majority of doctors have nothing to fear.  Guidance documents in my opinion are always to cater for the lowest common denominator level of behaviour in our profession.

• Henry Woo (@drhwoo) is an Associate Professor of Surgery at the Sydney Medical School of the University of Sydney and a urological surgeon. In the past he has worked in the NHS and been fully registered with the GMC. The opinions in this article are his own, and not of his employer.

• For more related reading, Alex Talbott, a digital communications consultant and social media consultant working with the NHS, has compared the GMC guidelines with those from the RCGP in the UK.

PrevPreviousWhat does it take to address the social and economic determinants of health in rural and remote Australia?
NextAt a time of uncertainty about the future of Indigenous health funding, the case for a greater spend in the community controlled sectorNext