It’s been a long struggle, like pushing a big rock up a steep hill, but advanced care planning is now here to stay

After more than two decades of struggle, Advance Care Directives are finally gaining acceptance within the health system.

That’s according to Colleen Cartwright, Foundation Professor of Aged Services and Director of the ASLaRC Aged Services Unit at Southern Cross University.

At the 12th Australian Palliative Care Conference in Canberra this week, Professor Cartwright will talk about Advance Care Directives, as well as the views of palliative care physicians on withholding and withdrawing life-sustaining treatment from adults who lack capacity.

Women have helped push changes to end-of-life care, she says. “I’ve noticed that it’s often the women who fought for women’s reproductive health rights in the 1970s who are now fighting for their right to determine their end of life care.”

Jennifer Doggett will report on the conference this week for Croakey, and you will be able to track all the coverage here.

For 22 years, Professor Colleen Cartwright has felt like Sisyphus as she struggled to promote the importance of advanced care planning to doctors, hospitals, other health care workers and the general community.

However, she now feels that she has pushed her metaphorical rock up to the top of the hill, and that the forces of momentum will carry it down the other side.

When she started working on end-of-life issues 22 years ago, Professor Cartwright says recognition of the role of advanced care planning among health professionals and the general community was very low.

In her work with older people she found that many were fearful about the end of their lives, not so much about death itself, but about their quality of life before death.  They were worried about losing their dignity, losing control of their minds and of being a burden on their families.

In the health system she saw people whose wishes for a peaceful death were being ignored by medical professionals who insisted on providing invasive and ultimately futile treatments.

Today, Professor Cartwright feels the situation has significantly improved, particularly in relation to the legal status of Advance Care Directives.

All States and Territories, apart from NSW and Tasmania, now have statutes that recognise Advance Care Directives and in both NSW and Tasmania their validity under common law is recognised.

Indeed, Professor Cartwright has been instrumental in changing the legislation in some of these jurisdictions, including the introduction of the Powers of Attorney Act 1998 in Queensland.  This legislation has been important in giving consumers and their families a greater say in what treatment they receive at the end of their lives.

Professor Cartwright sees these legal changes as reflecting a broader global movement towards patient autonomy, driven by generational change in the age group facing these issues in their own lives.

“I’ve noticed that it’s often the women who fought for women’s reproductive health rights in the 1970s who are now fighting for their right to determine their end of life care,” she says.

However, she feels that greater representation from non-medical palliative care experts and consumers on this group may have resulted in more workable recommendations.

She says that one of the most significant indications that the importance of end-of-life planning is gaining recognition at a national level was the recent announcement by Health Minister Tanya Plibersek of $800k to incorporate advanced care plans into Personally Controlled Electronic Health Records (PCEHRs).

“Even today,” she says, “there are still doctors who see death as a failure, instead of as a normal and natural part of life.”

For palliative care to be seen as an automatic and integral part of all end of life care, she says we first need to allocate greater resources to this area so that a palliative care team can be involved from when people are first diagnosed with a terminal illness.

Another challenge is for the palliative care sector and the health system more generally to deal with the increasing community acceptance of euthanasia for people who are terminally ill.

Her research has found that there is greater support for euthanasia among young people, although it is difficult to determine whether this view will change as this cohort grows older.

She also stresses the need to recognise the limits to palliative care. “It’s important to acknowledge that there are people who still have poor quality of life, even with the best quality of palliative care,” she says.

“This is why in many of the European countries where euthanasia is legal, the strongest advocates for euthanasia are palliative care specialists. What is critical is that high quality palliative care is always offered first and that end-of-life decisions are driven by what is in the best interests of the consumer.”

She expects that a key future driver of change in end-of-life care will be the increasing role of patient advocates who will push for better quality palliative care for their clients and for recognition of Advance Care Directives.  She also warns that a hospital or doctor may need to be sued for not following an ACD before some parts of the health system will recognise their validity.

However, Professor Cartwright is generally optimistic about the future of Advance Care Directives.  “Now the momentum is there, nothing will stop this process becoming an integral part of the way we care for people at the end of their lives,” she says.

She will present at the 12th Australian Palliative Care Conference on Wednesday about the human rights abuses involved in denying people who are dying adequate pain relief and will give a plenary session on Thursday on palliative care physicians’ knowledge, attitudes and practice relating to the law on withholding and withdrawing life-sustaining treatment from adults who lack capacity. She is also part of the panel for the closing plenary session on Friday.

The impending roll-out of a Palliative Approach Toolkit for Residential Aged Care Facilities project is generating some interest at the conference.

The project aims to strengthen the capacity of residential aged care staff to deliver high quality, evidence-based care for residents.

The new resources – which are expected to be available from October – will support the introduction of a framework of care based upon advance care planning, palliative care case conferencing, and end of life care pathways. 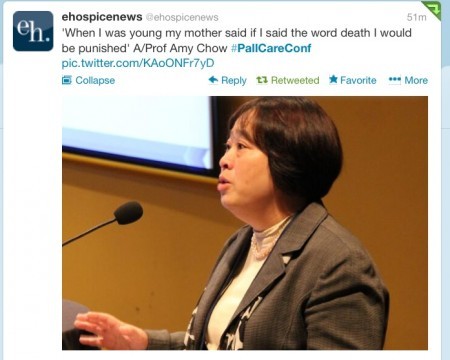 Caring for the carers

As well as Croakey’s coverage, you can stay in touch with the conference news at the online publication ehospice, which has reported on the importance of self-care for palliative care volunteers in the face of “death anxiety”.

Associate Professor Amy Chow, from the Department of Social Work and Social Administration at the University of Hong Kong, spoke today about Project Enable, a three-day training course that helps potential volunteers to confront their own issues with death.

These ‘Enablers’ are recruited from staff at existing health and elderly care units as well as healthcare professionals in hospitals. Through a ‘train the trainer’ approach, they then deliver life and death education workshops for terminally ill patients, elderly and their family members.

Associate Professor Chow will present again on Wednesday afternoon and Friday morning at the conference.

• What it takes to make palliative care everyone’s business
• A long and dreamy read about “letting go into death”
• Jean Kittson on laughing, dying and the importance of palliative care

The Election Wrap: focus on accountability and why the next Health Minister has a long to-do list