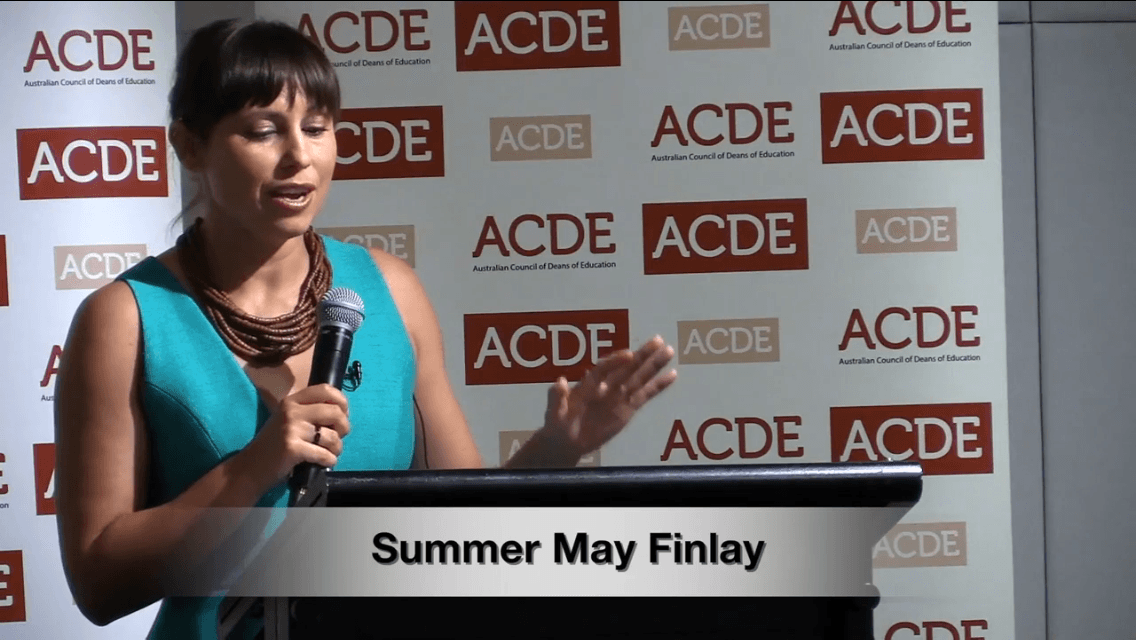 It’s not me, it’s you: Universities must do better for Indigenous people

Last week, Summer May Finlay, a Yorta Yorta woman, Croakey contributor, public health practitioner and PhD candidate, spoke at the Annual dinner of the Australian Council of Deans of Education, on the topic of Decolonising Universities. She didn’t pull any punches.

The full speech is available here, but below is an edited version. Finlay says things need to change, and that the onus should not be on Aboriginal and Torres Strait Islander people to do all the heavy lifting. It’s a post that brings personal experience and practical tips to the important task of making Universities places where Indigenous people can teach, learn and flourish.

Borrowing, creatively, from the movie Fight Club let’s start with a rule. The first rule of speaking on Indigenous issues is, one person does not speak for ALL Indigenous people.

There isn’t a single man who speaks for all men, there isn’t a white person who can speak for all white people, and similarly I can’t speak for all Indigenous people. I’m Summer May Finlay and I am a Yorta Yorta woman.

I’ve attended five universities, worked at two and given guest lectures at several. I am currently undertaking a PhD at the University of South Australia. I’ve completed a Master of Public Health Advanced at the University of Wollongong and have a Bachelor of Social Science from Macquarie University. Keeping ‘rule 1’ in mind, I want to talk to you about what University is like for Indigenous people, and what needs to change to make it better.

Albert Einstein said the definition of insanity is doing something over and over again and expecting a different result, but this is exactly what’s been happening with policies affecting Indigenous Australians for the past 200 odd years. A lack of Indigenous engagement on matters impacting us hasn’t worked out so well for us.

I have worked across a number of different public health fields including academia, policy, research and media. When it comes to Indigenous affairs, these spaces are dominated by non-Indigenous people.

We have a research project in this country which is about Indigenous Cultural Competency which is led by non-Indigenous people. Colin Barnett, Former Premier of Western Australia threatened to close up to 200 Aboriginal communities without consulting any of them. At a federal government level, we have never had an Indigenous Minster of Indigenous Affairs.

The lack of Indigenous participation in decision-making also happens at Universities. The word ‘us’ is what’s important in the saying, “Nothing about us, without us”, but Universities lack a critical number to make them feel like an “us”. They are introduced species, like the cane toad and the fox. They are Western Structures – foreign beasts on Aboriginal and Torres Strait Islander land.

We are less likely to go to University than other Australians and don’t do so well when we are there. The numbers don’t lie. Students who self-identified as Indigenous comprised 1.1 per cent of all enrolments in the first half of 2014, yet we make up 3% of the population.

In 2015, less than half of all Aboriginal and Torres Strait Islander students completed the University courses they had enrolled in. The current status quo isn’t working. We need to challenge it.

The burden of change

Speaking to Aboriginal students and academics about what they think is going on at Universities, there are some common issues. When an Aboriginal student goes to University it is very often well outside our comfort zone. For many of us, no one in our families, including our extended families has been to Uni. There is no one there to guide us. No one whose knowledge we can draw from.

Universities are a whole new world, culturally Western, predominantly white environments. And it is us who are expected to adapt. There are very few Universities that understand how much adaptation is required of us.

And adaptation can be exhausting. We are expected to walk in two worlds, yet at least for me and I expect for many Indigenous people, I am more comfortable walking in Aboriginal Culture. For instance, I’m well educated, well-spoken, rumoured to be well adjusted, but it’s hard work participating in a Western Culture because it’s not what comes naturally.  You can’t see that. All you can see is the armour I put on every time I walk in to a place seeped in Western culture. You can’t see the effort required to translate my culture into something palatable to Western culture.

The burden of change and adaptation should not fall on us alone, as it currently does. Expecting Indigenous staff to be the only ones focusing on Indigenous matters such as the Reconciliation Action Plan, and the recruitment of Indigenous students and staff, will not change the University culture.  To expect us to do all the changing while Universities do nothing about the status quo, it is to continue the process of colonisation. Universities need to meet us half way, because it is us who pays the price for your inaction.

What got me through University the second time I went, was a person who created a community, Michael McDaniel,  who was then Head of Warawara Department of Indigenous Studies at Macquarie University.

The first time I went to University I felt out of depth. One of the reasons I dropped out because I felt like I didn’t belong, but Michael McDaniel created a space where there were lots of other Aboriginal people – academics, support workers and students. I found a home.

Despite his efforts, it wasn’t smooth sailing. I was surprised, probably naively, that non-Indigenous people were teaching Indigenous studies. I found those classes disappointing at best and upsetting at worst. The lecturers spoke with authority but I felt uncomfortable because the way they spoke about us didn’t reflect my reality or experience. Imagine what it would be like to have a woman teaching on masculinity.

Enrolling for my Masters, I was a litter wiser. I interviewed Universities – I mean literally interviewed them! I wanted a University that demonstrated cultural competency. Once I enrolled the course coordinator supported me and understood some of the challenges I faced. I was also working in an Aboriginal organisation. I had a community.

For my PhD I did the same. I have an Aboriginal supervisor, Professor Alex Brown, and sit within an Aboriginal unit. Again, it’s a community, a home. Community has helped me though all my degrees. It’s this sense of community, I think, that needs to be fostered at all universities.

The advantage of creating a community is voice. Non-Indigenous people should not be speaking on our behalf. Aboriginal and Torres Strait Islander people have voices. What we need is a space.

I expect to see Indigenous people’s voices preferenced and prioritised.  You can do that when you have a critical mass. Once a community has been developed it is their voice that should be amplified on our issues. We shouldn’t just be consulted on issues affecting us. We should be making the decisions ourselves. This means Universities letting go of some of their hard-won power.

The hierarchical nature of University excludes us from the decision making. I appreciate that there are often Pro Vice Chancellors of Indigenous Engagement like one of my mentors the amazing Bronwyn Fredericks who is at Central Queensland University, Deans such as Peter Radoll at Canberra University, and of course Peter Buckskin from the University of South Australia.

Its time non-Indigenous Australians stopped pretending they are the solution and realise that we are. It’s time to recognise that while non-Indigenous Australians are making decisions on our behalf, they are part of the problem. We aren’t perfect, we will make mistakes, but I believe we can do a hell of a lot better than what is currently being done for us. The status quo isn’t working.

It’s not just the power imbalance which holds us back but also the deficit lens through which we are seen. For the most part, this has become the entire dialogue about us but, as University of Queensland academic, Dr Chelsea Bond has said, “Charting a community’s deficits only seems to deepen the despair”.

As Indigenous Peoples, we do not see ourselves in deficit. We know we are more than the sum total of our negative statistics, but Universities tend to focus on our deficits rather than our strengths.

While we continue to been seen only as in terms of deficit, how will we ever be seen as capable of running our own affairs?

I stand here because of the strong advocacy of people who have gone before me — both Indigenous and non-Indigenous. Aboriginal people such as my mum Rhonda Finlay, Professor Alex Brown, Geoff Scott, Les Malzer, Lisa Briggs, Dr. Scott Winch, Jill Gallagher and Professor Karen Adams.

What does decolonisation of Universities look like in practice?

The people I have listed, Indigenous and non-Indigenous are the reasons why I know we can undertake a decolonising process. They are already doing it.

I’d like to leave you with a few questions:

*Summer May Finlay is a Yorta Yorta woman, a public health practitioner, a PhD candidate and a Croakey contributor. On twitter @OnTopicAus