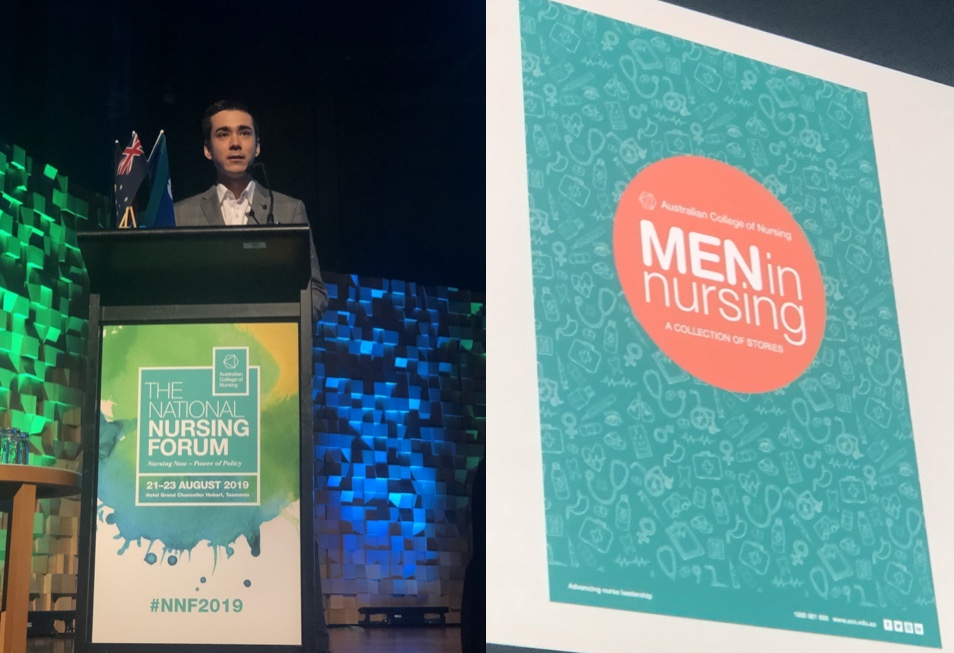 When Luke Yokota finished Year 12 with good grades some years back and decided to apply to study nursing he got a very mixed reaction from teachers, family and friends.

Some responded positively, others were worried he was not living up to his potential. “Why not choose something more prestigious like law or medicine?” they asked.

A teacher who had always been incredibly supportive reminded him that he could do anything he wanted to, “as though I wasn’t already choosing what I wanted to do.”

Others, like his grandfather, literally laughed in his face.

“He couldn’t fathom a man would want to do nursing,” Yokota told Croakey after launching the Men in Nursing e-book at the Australian College of Nursing (ACN) National Nursing Forum in nipaluna/Hobart last week.

The publication of the e-book follows Yokota’s appointment last year as the inaugural Chair of the ACN Men in Nursing Working Party, after he put a question about the barriers faced by men to Health Minister Greg Hunt at the 2018 National Nursing Forum.

A registered nurse at Brisbane’s Princess Alexandra Hospital and a clinical facilitator and tutor at Griffith University, Yokota told the Minister that he felt if gender presented a barrier to any man into nursing “then we have failed as a community”. 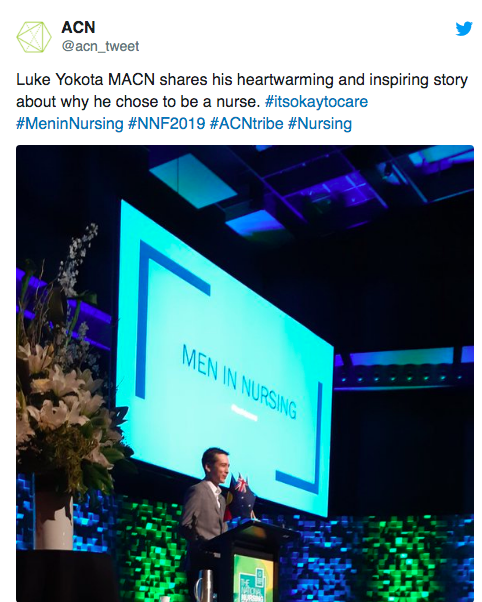 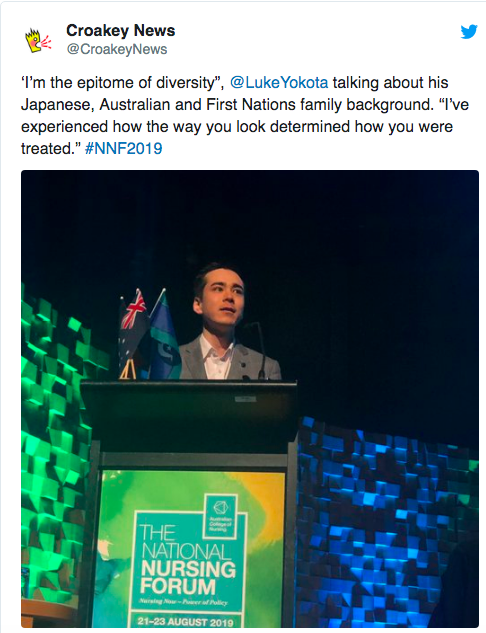 Currently men make up just over 11 percent of the nursing workforce, and are mainly employed in critical care areas, management  and mental health.

Yokota’s Working Party is aiming to lift that number, to better reflect the diversity of the broader community, counter stereotypes and to help address a predicted workforce shortfall of 125,000 nurses in Australia by 2030.

Its e-book features the stories of 28 Australian male nurses who talk about why they have gone into nursing, the barriers they confronted or continue to face, and their experiences in the profession.

Like their female counterparts, male nurses come from a range of backgrounds, hail from all corners of Australia including rural and remote areas, and have entered the profession through diverse pathways.

A few went straight into nursing from school, while others came via other careers — including the defence forces, advertising and “climbing the corporate ladder” — that failed to deliver the job satisfaction they have since found in nursing.

Some were the first male nurses to be employed in their organisations, and the first to be encountered by some patients.

Many have had some experience of stigma and stereotypes. They talk about how nursing rarely comes up for boys in school career counselling, about being asked why they didn’t want to go into medicine instead, and the sidelining that can happen at work, including awkwardness around performing some procedures for female patients. 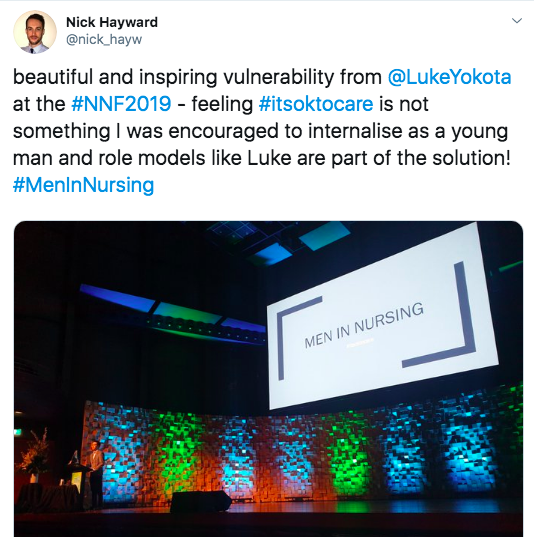 “Why on earth would you want to be a nurse?” was a common question for Ben Chiarella, who left a job in the corporate sector and a Master of Business behind him to go into nursing, and is now clinical lead on telehealth home monitoring for Live Better in Orange.

His response?: “A career in one of the largest workforces in the world, with extensive and varied opportunities in a profession that has meaning and provides tangible benefits at both micro and macro levels for societies and heath across the globe.”

But for some in his life, he writes, there has been a continuing misconception that “this nursing change was a dead-end move and I was potentially underselling myself”.

Others speak about the “toxic masculinity” that can be at the heart of these misconceptions, and that are challenged by the Men in Nursing mantra that it’s “okay for men to care”.

Nick Hayward, who came to nursing after working as a retail manager, writes in the e-book about realising that his own initial responses to people’s questioning of his career choice were reflections themselves of gender stereotypes about men and positions of care.

He would find himself telling other men that he had “needed a change”, talking about his mum and sister having been nurses, or emphasising the “technical challenges of nursing”.

He writes that it only occurred to him recently that these answers were “anything but genuine”.

“They reflect a conflict between the masculinities I have been raised in and had my behaviour measured against, and the somehow vaguely unacceptable answers I would prefer to give, or the emotionally honest stories I would rather tell.” said Hayward, who is in his final year of nursing studies and working as an acute care Assistant in Nursing at Royal North Shore Hospital in Sydney.

He realised those more honest answers were:

I really love caring for people. I feel good knowing that I can help people in their time of need.

I helped a guy up to the toilet the other day and he told me it was nice to chat to a bloke in a nurse’s uniform for a change. Reminded me of my granddad.

I cry after work sometimes because it’s hard meeting people near death and not knowing if I’ve helped them – but I’m glad I get the chance.”

Hayward concedes the barriers he has faced may not measure up against discrimination and disadvantages experienced by many others in his profession or under his care, but says they are problematic nonetheless. 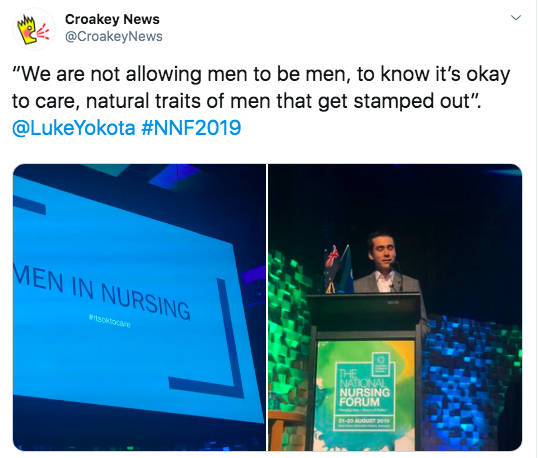 Australia’s Workplace Gender Equality Agency agrees. It has campaigned for men to pursue careers in female-dominated industries such as health care, saying gender diversity can help with workforce shortages and improve innovation and performance.

While a problem in and of itself, gender bias also becomes a self-fulfilling cycle that limits the role of men in nursing and undermines the profession, according to researcher Ann Anthony.

“This cycle results in different learning experiences for men and women as nursing students, limits recruitment and retention of men, and perpetuates traditional male-female stereotypes that make the profession irrelevant to the diverse population that the profession claims to represent and serve,” she wrote.

Other male nurses at #NNF2019 told Croakey those stereotypes endure at times, when they may be expected to step up for the physically harder duties at work or to have “broader shoulders” when it comes to care fatigue.

“There’s also the assumption that you can take the most verbally or physically abusive patients because you’re a man and you can take care of yourself,” said one who asked not to be named.

Advancing nursing for all

Launching the e-book at #NNF2019, Yokota said he wanted to make it clear that the Men in Nursing strategy Is “not only about championing men in nursing (but also) about continually advancing nursing, advocating equality for women and men in nursing and beyond”.

The responses he got when he decided to become a nurse shook his confidence, he said, but he persevered. Though he couldn’t pinpoint exactly why he wanted to be a nurse, what he did know was that it was a profession that cared for people and was highly regarded in the community.

“These were the types of attributes I valued in a career,” he said.

While he believes the majority of people and most patients support men in nursing, his efforts are to target “the undercurrent, the toxic masculinity and how stereotypes play out today” that may make a boy or man discount the idea of becoming a nurse. 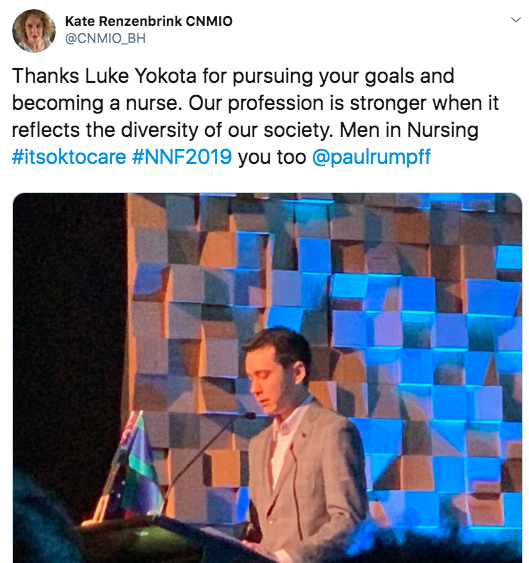 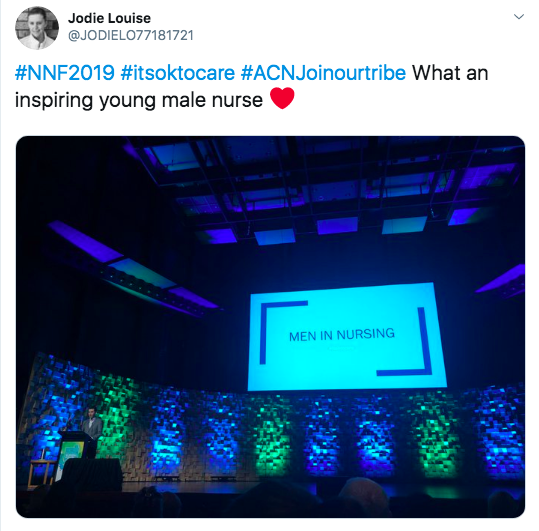 The Men in Nursing strategy has not set any particular target. Its end goal is to make sure that any boy or man in Australia who wants to pursue nursing is able to do so, he added.

The main objectives of the Working Group are to: 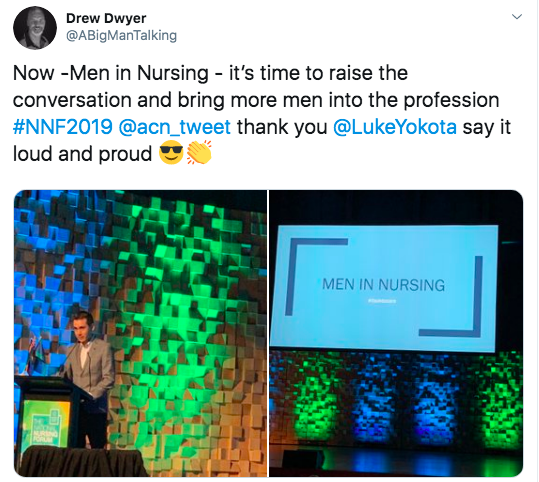 Further reading: What are five barriers that men face in the nursing workforce?

Watch our interview with Luke Yokota:

We also sat down with Chris O’Donnell, a Director of Nursing for the Office of the Chief Nursing and Midwifery Officer in Queensland, and chair of the Australian College of Nursing Queensland. You can watch our interview here: 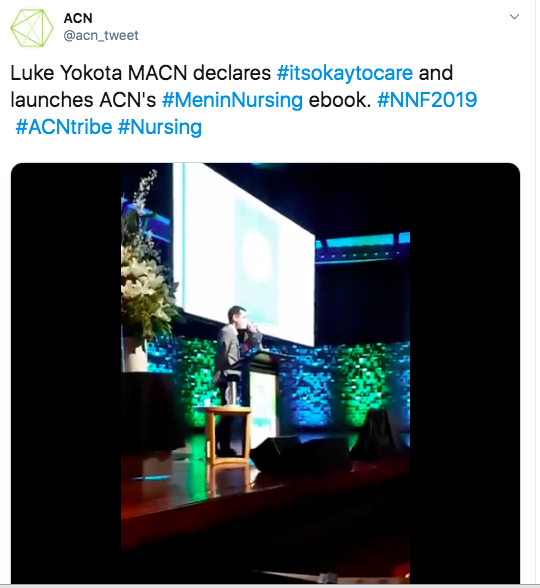 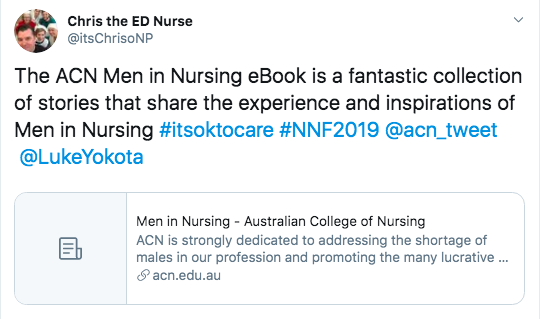 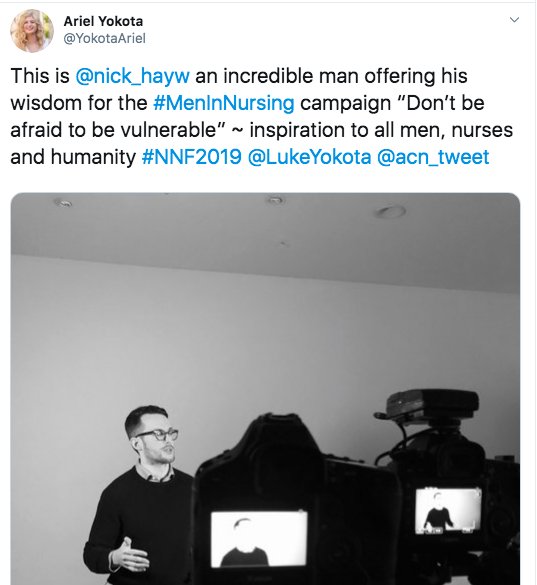 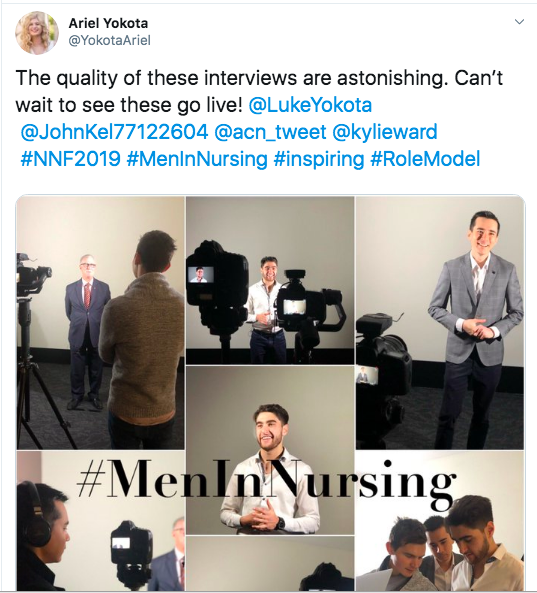 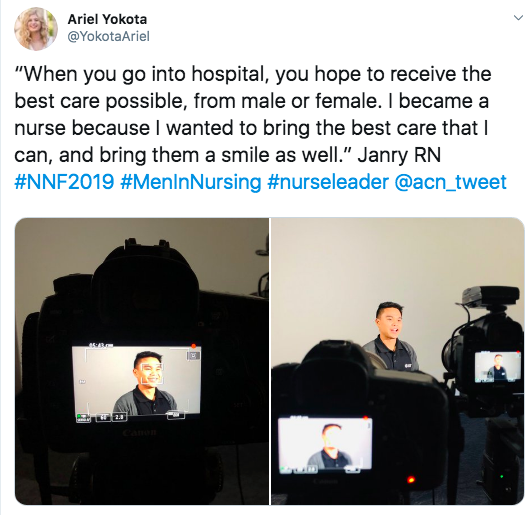 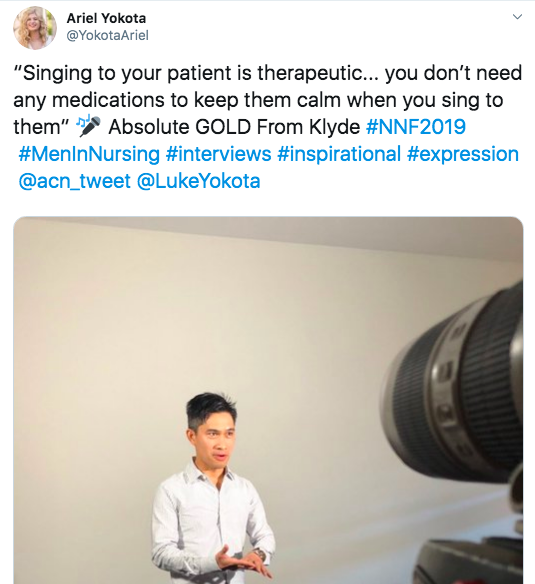 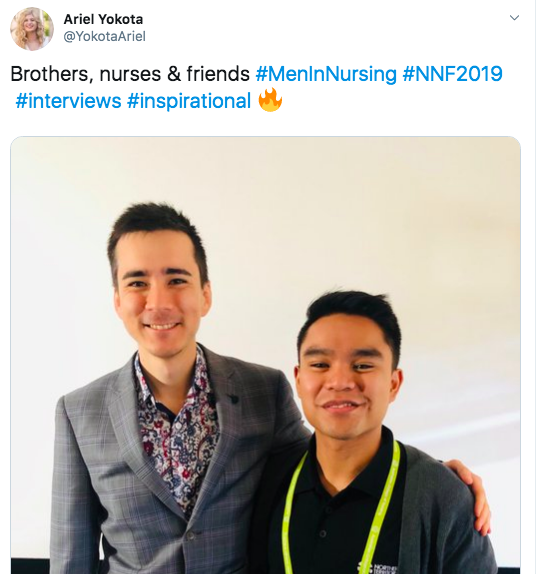