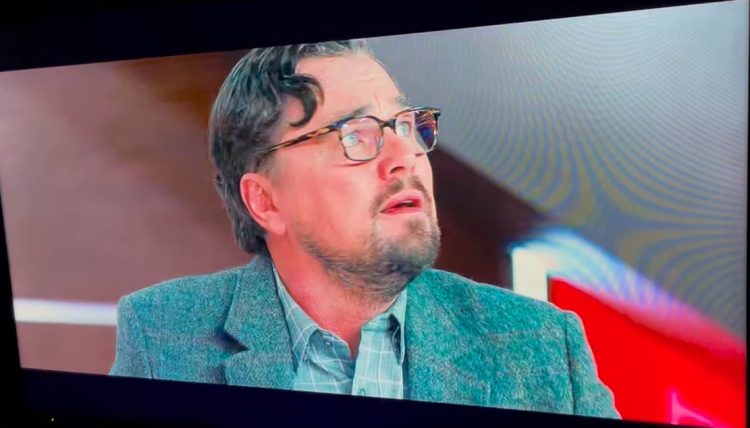 Professor Randall Mindy, played by Leonardo DiCaprio, in the popular Netflix film, 'Don't look up', which satirises media and government failures to respond to catastrophic threats.

Below are two related articles: the first covers a new World Economic Forum report’s analysis on climate change risks; the second is by climate scientists arguing for a moratorium on further climate research until politicians act, globally and locally, on the existing evidence.

Failure to act on climate change is the top long-term threat facing the world, with severe impacts over the next decade expected to include droughts, fires, floods, resource scarcity, species loss and involuntary migration, according to a new World Economic Forum report.

The report is pessimistic about the likelihood of the world achieving a well-managed and just climate transition. It says COP26 commitments are expected to miss the 1.5°C goal established in the 2016 Paris Climate Agreement, increasing the risks from a disorderly climate transition.

“The current trajectory is expected to steer the world towards a 2.4°C warming, with only the most optimistic of scenarios holding it to 1.8°C,” says the report.

It says the economic overhang of the COVID-19 crisis and weakened social cohesion – in advanced and developing economies alike – may further limit the financial and political capital available for stronger climate action, and it also flags concerns that countries will prioritise short-term measures to boost economic growth rather than implementing green transitions.

“Brazil, for example, joined the other 140 countries responsible for 91 percent of the Earth’s forests in endorsing the Glasgow Leaders’ Declaration on Forests and Land Use even as deforestation in the Amazon accelerated to a 15-year high in 2021 following the pandemic-induced recession of 2020,” it says.

The report warns that a disorderly climate transition characterised by divergent trajectories worldwide and across sectors will further drive apart countries and divide societies, creating barriers to cooperation.

“Given the complexities of technological, economic and societal change at this scale, and the insufficient nature of current commitments, it is likely that any transition that achieves the net zero goal by 2050 will be disorderly,” it says. 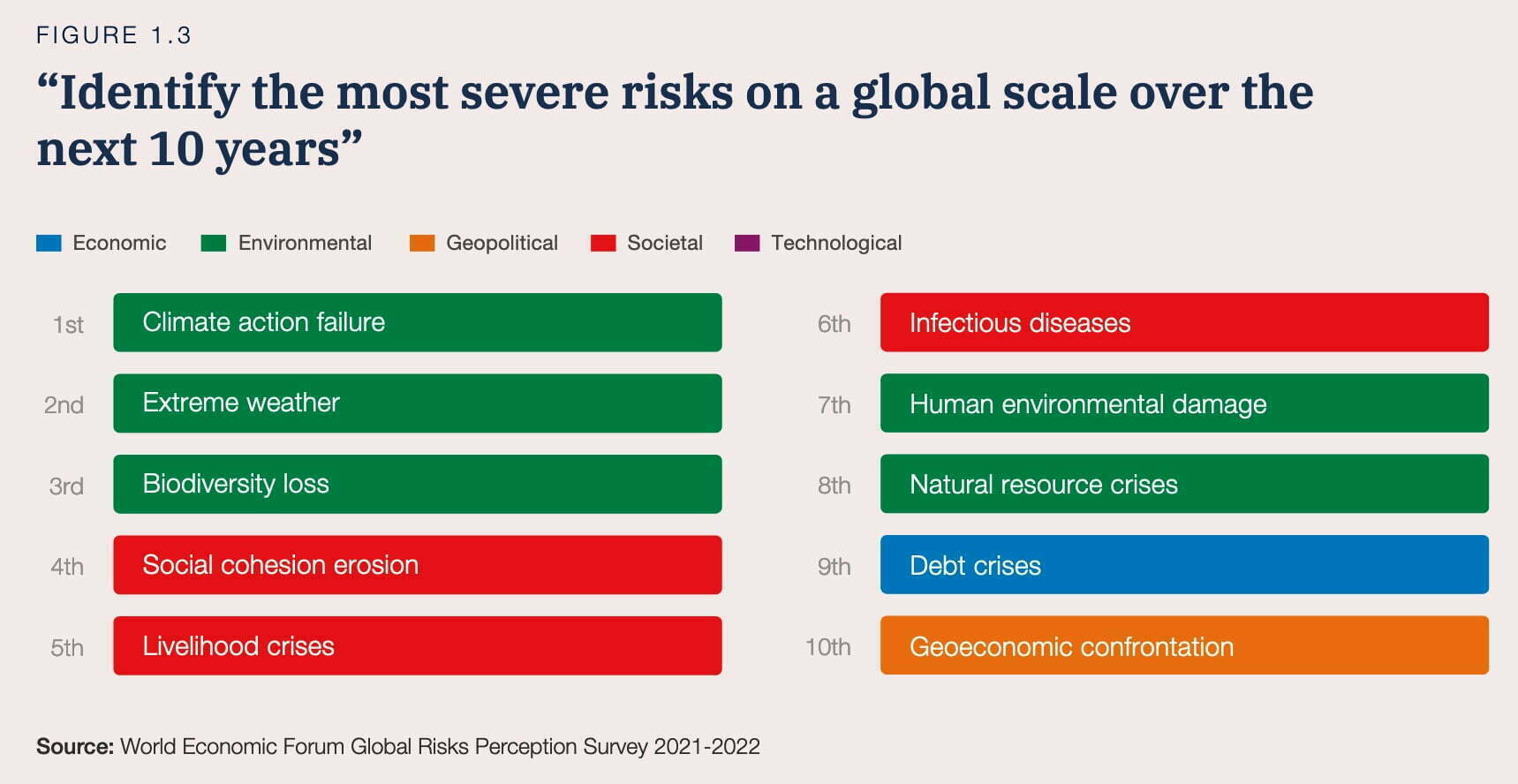 The Global Risks Report 2022 – which also addresses pandemic management, mental health, refugees, social cohesion, digital dependency and many other public health issues – tracks global risks perceptions among risk experts and world leaders in business, government, and civil society. It draws on the views of over 12,000 country-level leaders who identified critical short-term risks to their 124 countries.

It warns that countries continuing down the path of relying on carbon-intensive sectors risk losing competitive advantage through a higher cost of carbon, reduced resilience, failure to keep up with technological innovation and limited leverage in trade agreements.

“Yet shifting away from carbon-intense industries, which currently employ millions of workers, will trigger economic volatility, deepen unemployment and increase societal and geopolitical tensions,” it says.

“A transition that fails to account for societal implications will exacerbate inequalities within and between countries, heightening geopolitical frictions.”

The report says the pandemic has exposed the need for stronger global governance and more effective international risk mitigation efforts, and that existing institutions of global governance are under pressure. It notes as an example the challenges that an under-resourced World Health Organization (WHO) continues to face in responding effectively to the COVID-19 pandemic.

The report provides some timely context for considering this new paper, ‘The tragedy of climate change science’, published in the journal, Climate and Development.

The authors call for a “radical” moratorium on further climate research, arguing that it would be “wholly irresponsible” for scientists to participate in a 7th Intergovernmental Panel on Climate Change (IPCC) assessment when the science-society contract is broken, and the problems are political rather than a lack of evidence of the need for action.

In the article below, first published in The Conversation under the headline, ‘Scientists call for a moratorium on climate change research until governments take real action’, the authors argue that scientists must instead focus their energy and efforts on scientific advocacy in the public interest.

Governments concur: the science is settled. But governments have failed to act at the scale and pace required. What should climate change scientists do?

There is an unwritten social contract between science and society. Public investment in science is intended to improve understanding about our world and support beneficial societal outcomes. However, for climate change, the science-society contract is now broken.

The failure to act decisively is an indictment on governments and political leaders across the board, but climate change scientists cannot be absolved of responsibility.

As we write in an article about this conundrum, the tragedy is the compulsion to provide ever more evidence when the phenomena are well understood and the science widely accepted. The tragedy is being gaslighted into thinking the impasse is somehow our fault, and we need to do science differently: crafting new scientific institutions, strategies, collaborations and methodologies.

Yet, global carbon dioxide emissions are 60 percent higher today than they were in 1990, when the Intergovernmental Panel on Climate Change (IPCC) published its first assessment. At some point we need to recognise the problem is political and that further climate change science may even divert attention away from where the problem truly lies.

Was COP26 too little, too late?

The outcome of COP26, summarised in the draft Glasgow Climate Pact, includes some progress, including an agreement to begin reducing coal-fired power, removing subsidies on other fossil fuels, and a commitment to double adaptation finance to improve climate resilience for countries with the lowest incomes.

But many of the world’s leading scientists argue that this is too little, too late. They note the failure of COP26 to translate the 2015 Paris Agreement into practical reality to keep global warming below 1.5℃ above pre-industrial levels.

Even if COP26 commitments are fulfilled, there is a strong likelihood that humanity and life on Earth face a precarious future.

What are climate change scientists to do in the face of this evidence? We see three possible options — two that are untenable, one that is unpalatable.

Where to from here for climate change scientists?

The first option is to collect more evidence and hope for action. Continue the IPCC process that stays politically neutral and abstains from policy prescriptions. A recent editorial in Nature called on scientists to do just that: stay engaged to support future climate COPs.

However, this choice not only ignores the complex relationship between science and policy, it runs counter to the logic of our scientific training to reflect and act on the evidence. We know why global warming is happening and what to do. We have known for a long time.

Governments just haven’t taken the necessary action. In a recent Nature survey, six in ten of the IPCC scientists who responded expect 3℃ warming above pre-industrial levels by 2100. Persisting with this first option is therefore untenable.

The second option is more intensive social science research and climate change advocacy. As Harvard historian Naomi Oreskes recently observed, the work of the IPCC’s Working Group I (WGI, on the physical science basis of climate change) is complete and should be closed down. Attention needs to focus on translating this understanding into action, which is the realm of WGII (on impacts, adaptation and vulnerability) and WGIII (on mitigation of greenhouse gas emissions).

In parallel, growing numbers of scientists are getting involved in diverse forms of advocacy, including non-violent civil disobedience.

However, albeit more promising than option one, there is little evidence of impact thus far and it is doubtful this pathway will lead to the urgent transformative actions required. This option is also not tenable. 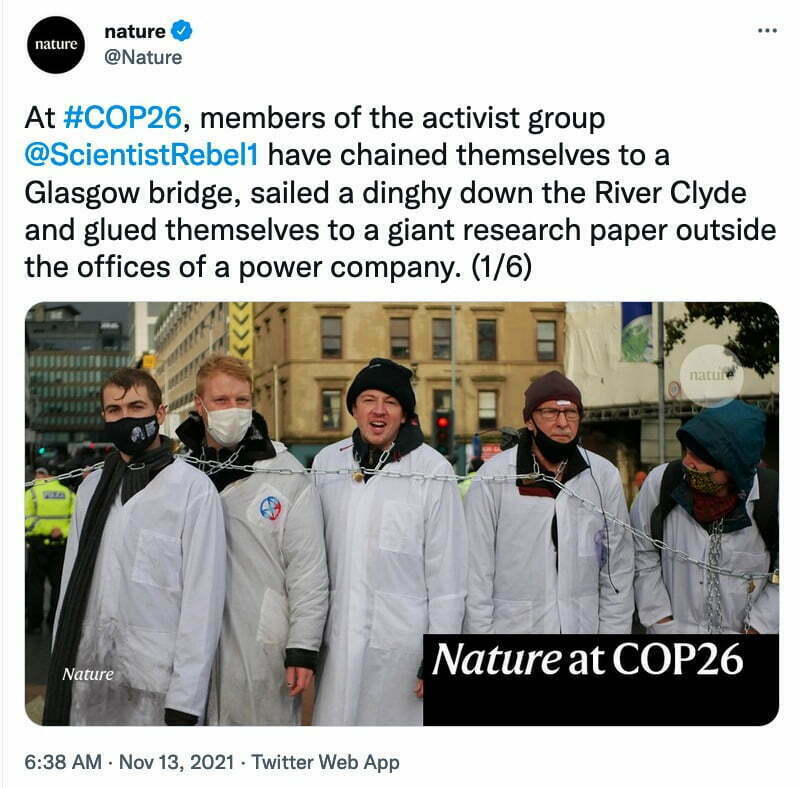 Halt on IPCC work until governments do their part

The third option is much more radical, but unpalatable. We call for a moratorium on climate change research that does little more than document global warming and maladaptation.

Attention needs to focus on exposing and re-negotiating the broken science-society contract. Given the rupture to the contract outlined here, we call for a halt on all further IPCC assessments until governments are willing to fulfil their responsibilities in good faith and mobilise action to secure a safe level of global warming. This option is the only way to overcome the tragedy of climate change science.

Readers might agree with our framing of this tragedy but disagree with our assessment of options. Some may want greater detail on what a moratorium could encompass or worry it may damage the credibility and objectivity of the scientific community.

However, we question whether it is our “duty” to use public funds to continue to refine the state of climate change knowledge (which is unlikely to lead to the actions required), or whether a more radical approach will serve society better.

We have reached a critical juncture for humanity and the planet. Given the unfolding tragedy, a moratorium on climate change research is the only responsible option for revealing and then restoring the broken science-society contract. The other two options are seductive but offer false hope. 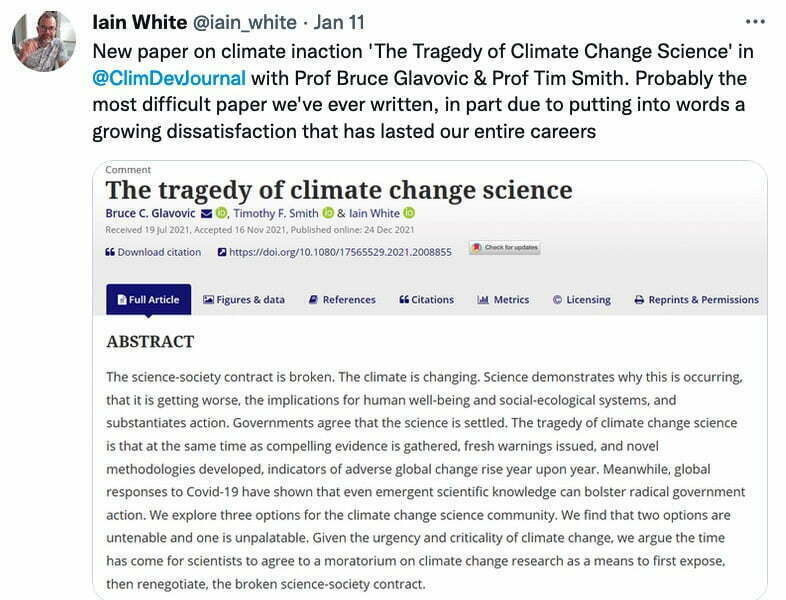 Bruce C. Glavovic is a Professor in the School of People, Environment and Planning at Massey University in New Zealand. He was Coordinating Lead Author of the sea-level rise chapter in the IPCC’s 2019 Special Report on the Ocean and Cryosphere in a Changing Climate and is a Lead Author and Cross-Chapter Paper Lead in the IPCC’s Working Group II contribution to AR6. He is an Editor-in-Chief of Ocean & Coastal Management, Senior Editor for the Oxford Research Encyclopedia of Natural Hazard Science, and on several other Editorial Boards. He’s widely published in the fields of climate change adaptation, coastal management and natural hazards planning.

Iain White is a Professor of Environmental Planning and the Associate Dean Research for Arts, Law, Psychology and Social Science at the University of Waikato in New Zealand. He is committed to engaging beyond the discipline to researchers, practitioners and communities to generate real world impact. His current research investigates critically the nature of the science-policy-practice interface, tracing theory and data through to policy and outcomes. He has recently applied this approach to analysing why systemic change is so difficult, in particular with regards to climate change adaptation and new forms of spatial development.

Timothy F. Smith is a Professor and Australian Research Council (ARC) Future Fellow based at the University of the Sunshine Coast (USC), where he is focused on coastal vulnerability and governance. He is also an Adjunct Professor with the Environmental Sustainability Research Centre at Brock University (Canada) and a Senior Research Associate with SWEDESD at Uppsala University (Sweden). He is co-Chair of Future Earth Coasts and on the steering committee of Future Earth Australia. He was formerly the Executive Dean for the Faculty of Arts, Business and Law, and the Inaugural Director of the Sustainability Research Centre at USC.

Read Croakey’s archive of articles on COP26 and health.

PrevPreviousOn the value of microphones
NextA poem asks, Is it a win?Next