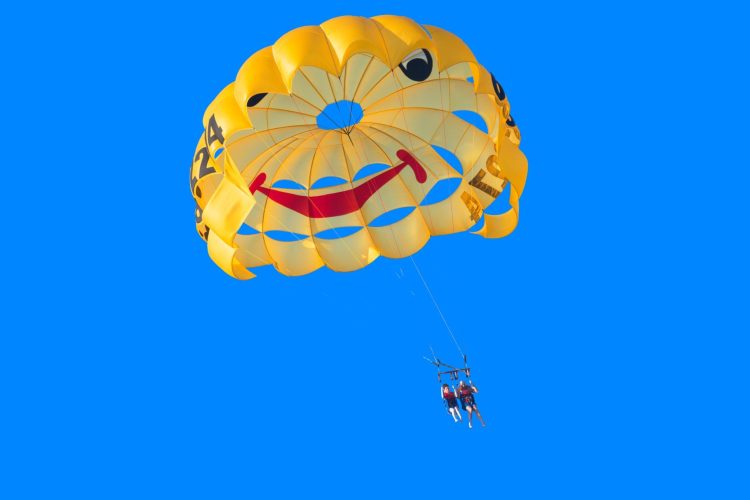 Is this really the time for ditching the parachute? Photo by Quino Al on Unsplash

It’s time for a parachute analogy, as well as pandemic communications that are respectful

Introduction by Croakey: More than 200 Australian economists have signed an open letter to the Prime Minister and National Cabinet, stressing the importance of maintaining physical distancing and other measures that have helped control the spread of the novel coronavirus in Australia.

Their letter follows “a growing chorus” of commentators calling for physical distancing measures to be eased or radically curtailed for the sake of the economy.

The economists caution against drawing “a false distinction” between the public health and economic aspects of the crisis, and say it is vital to keep social distancing measures in place until the number of infections is very low, testing capacity is expanded well beyond its already comparatively high level, and widespread contact tracing is available.

A second-wave outbreak would be extremely damaging to the economy, in addition to involving tragic and unnecessary loss of life.”

Meanwhile, the Victorian Government has released modelling, by epidemiological experts at the Department of Health and Human Services in collaboration with Monash University and the Doherty Institute, estimating the impact of physical distancing restrictions in saving lives and reducing demand upon hospitals.

The authors warn that acting too quickly or broadly to ease these restrictions could lead to rapid spread of the virus (see more in this presentation by the Victorian Chief Health Officer, as well as this Sydney Morning Herald article suggesting that measures controlling the coronavirus spread have also led to a dramatic fall in influenza cases).

As New Zealand moves to ease its level 4 lockdown from next Tuesday (28 April), a risk communication expert from the United States has warned of the dangers of promising the public that it will be “safe” to come out of lockdown.

In an article titled When and How to Emerge from Our COVID-19 Lockdown Is a Political Question; It Will Kill People Even If It’s Done Right, Dr Peter Sandeman said the risks of easing lockdown restrictions should be clearly explained to the public:

One reason why the public needs to understand all this is to help make it a bit safer for officials to reopen the country without getting blamed for the resulting deaths.

If they do it wrong, the pandemic will speed up again, hospitals will get overrun again, and we’ll need to go into lockdown again.

If they do it right, we can transition to a New Normal –a New Normal in which a lot of us will s-l-o-w-l-y get infected and some of us will die. We need to understand that going in.”

Sandeman’s article is from comments emailed to a journalist researching this story, Post-Virus Reopening Is More About Ethics than Science.

Meanwhile, Simon Chapman, Emeritus Professor in Public Health at the University of Sydney, draws upon many years of public health advocacy in tobacco control and other fields in making recommendations for effective communications at this politically contested time, when the idea of ditching a parachute mid-jump seems a useful analogy.

Cognitive dissonance is a much-studied phenomenon concerned with a branch of the mental heuristics that people use to enable them to sustain particular beliefs or behaviours in the face of overwhelming evidence that could swing a wrecking ball at the foundations of those beliefs and behaviours.

Coined by American psychologist Leon Festinger in 1957, cognitive dissonance theory suggests “we have an inner drive to hold all our attitudes and behaviour in harmony and avoid disharmony (or dissonance). This is known as the principle of cognitive consistency. When there is an inconsistency between attitudes or behaviours (dissonance), something must change to eliminate the dissonance.”

Early in my career I was struck by the multitude of ways that smokers rationalised their smoking, described by US Surgeon Antonia Novello 30 years ago as “ the most extensively documented cause of disease ever investigated in the history of biomedical research.”

With others, I published two well-cited papers in the American Journal of Public Health (1993) and Preventive Medicine (2004) documenting the range and clustering of these beliefs in Australian smokers.

We called them “self-exempting” beliefs: beliefs that people cling to as psychological talismen they found useful in warding off the deluge of unsettling information about the risks of smoking.

In the first paper, we found that while 50-80 percent of smokers agreed that several diseases were caused by smoking, nearly half of all smokers we surveyed agreed with five or more of 14 different self-exempting beliefs we asked them about.

So smokers could simultaneously agree that smoking caused lung cancer, but also believe that “scientists are telling us every day that all sorts of other things also cause cancer” or “I play sport every week and get the toxins out of my system”.

In the second paper, we grouped these beliefs into three clusters.

“Bulletproof” beliefs: Beliefs suggesting smokers think they have some personal immunity to the health effects of smoking. Examples:

“Skeptic” beliefs: Those  indicating smokers do not believe medical evidence about smoking and disease. Examples:

“Jungle” beliefs: Beliefs normalising the dangers of smoking because of the ubiquity of risks to health (‘‘life’s a jungle of risks’’) Examples:

We found that ex-smokers adhered to far fewer of these beliefs than smokers. This made us wonder if some of these beliefs were porous and vulnerable to being eroded to flaccid levels of talismanic potency by strategic efforts at countering them.

With COVID-19, self-isolation and distancing are the two behaviours that all infectious disease experts agree are absolutely critical to “flattening the curve” and reducing contagion.

But we have all by now heard a wide range of  self-exempting excuses for why some are taking self-isolation lightly.

Some I’ve noticed include:

Doubtless there are many more of these in circulation. Some will have a tiny number of adherents, but others will be muttered by larger swathes of the community and may be amenable to strategic efforts to render them less potent.

Those in government who are planning the communication campaigns would do well to get a handle on which of these sort of beliefs are most prevalent in those who are breaching isolation. What they learn could then stimulate efforts to deflate these beliefs.

It is important to understand that those who are sub-optimally isolating and breaching the guidelines are not all simply stupid or wilfully ignorant. Efforts through announcements and interviews to set them right with fact-based refutations will have only limited success.

At the heart of cognitive dissonance theory is the understanding that people cling to self-exempting beliefs because they make them feel comfortable and more harmonious across values and decisions they cherish.

Self-exempting beliefs bring comfort and sustain these wider and deeply held beliefs and decisions. So a communication objective which sets out only to say “you’re wrong, listen to this instead” will miss the point.

Subverting false beliefs to render them unsustainable in a COVID-19 non-isolator’s top-of-mind lexicon may be an intermediary goal on the way to them changing their behaviour, but it needs to be done respectfully, not combatively.

Over my four decades in public health advocacy, I’ve found analogy to be very useful in gently eroding sticky beliefs.

In gun control, resistance to gun registration was eroded by pointing out that we all understand that cars, boats and even dogs require registration for good reasons. So why not guns too?

And law-abiding gun owners outraged at gun control measures which assumed every gun owner could be dangerous are no different to assuming every driver might be alcohol affected in random breath testing. Or every airline passenger a terrorist when passing through airport security. Or every shopper a thief when bags are inspected at the checkout.

In tobacco control, resistance to the news that other people’s smoke could be harmful was memorably disarmed by analogies about the urinating and non-urinating sections of public swimming pools. 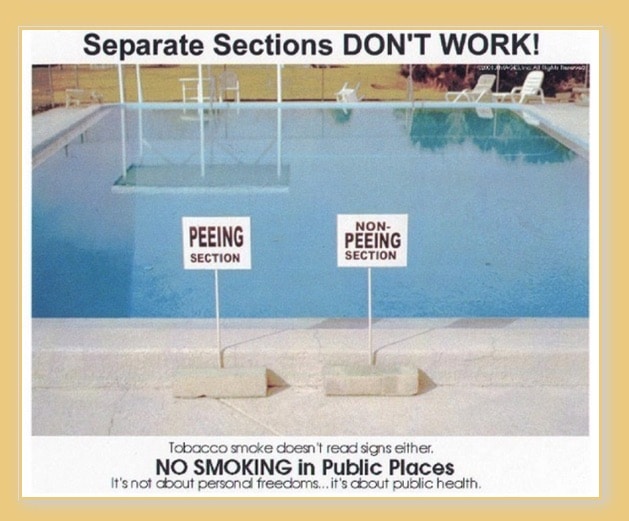 Smokers who insisted that it was “all the additives and chemicals” in cigarettes (not tobacco smoke itself) that caused all the health problems were reasoning as if the infernos in hell might be less uncomfortable if the temperature was turned down one degree by removing additives.

And tobacco companies’ hand-on-heart efforts to tweak the toxicity of their products was like the owners of the White Star Line removing the splinters from the handrails of the Titanic.

Analogies are inherently respectful as they memorably point to equivalences between things that everyone agrees with and seed the idea that “this is just like that”.

Freedom to vs freedom from

With COVID-19, the “freedom to” imperative often dominates resistance isolation, while the “freedom from” the risk of rapid exponential growth in an untreatable, often fatal disease takes a back seat.

Efforts to reframe freedom as importantly including freedom from the indelible scenes we have seen playing out in the USA, Italy, Spain and the UK are likely to provide fertile ground strengthening the already widespread view that our deprivations are helping us dodge a hideous population-wide bullet.

And the deprivations of staying at home can be flipped in the memorable words of the (unknown) creator of this art compilation: “Don’t count the days, make the days count.” 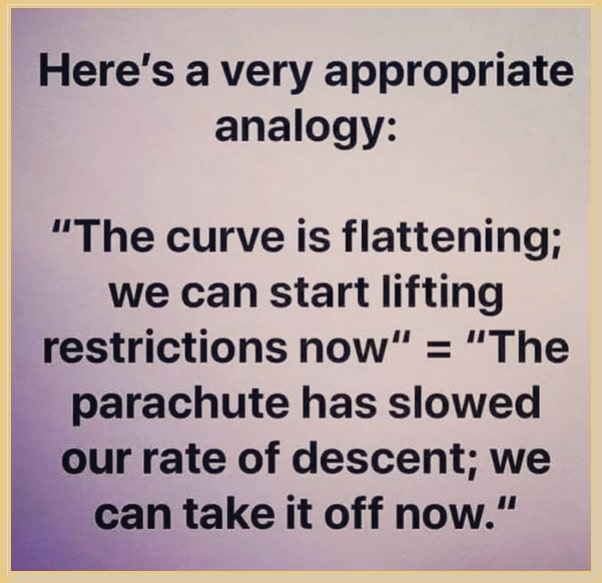 • This article was first published at Professor Simon Chapman’s blog, and is republished here with permission. On Twitter, follow @SimonChapman6

PrevPreviousThe coronavirus supplement is the biggest boost to Indigenous incomes since Whitlam. It should be made permanent
NextCalling for urgent pandemic action to prevent more deaths in custodyNext